The work ‘Wintry Trees’ is a colourless 90.5 x 31 cm (35 x i12 inches) ink-on-paper hanging scroll, featuring an idealised and harmonious unpopulated mountain-and-water landscape on an overcast winter’s day during the Ming dynasty. (Incidentally ‘Ming’ means ‘bringer of light and certainly these were quite enlightened times.) Yet its execution was very much reminiscent in the style of a predecessor from half a millennium earlier, Li Cheng (919-967) who was an exponent during the so-called ‘Later Liang’ dynasty.

Painted in the city of Suzhou (in the south-eastern Jiangsu Province of East China) on 25th January 1543 by a reclusive 73-year-old Wen Zhengming (1470 – 1559), we know that ‘Wintry Trees’ took 10 hours to execute and it was created as a thankyou for a relative stranger called Mr Li Zicheng because the artist was grateful for a gift that the man had brought from a considerable distance away, together with condolences, in the aftermath of Wen Zhengming’s unnamed wife’s death in late 1542. The men spoke as the artist painted.

Wen Zhengming, who was not only an artist but a calligrapher and poet, hailed from a movement called the Wu (or Wumen) School and was regarded even during his lifetime as one of the four masters of painting during the Ming era. That explains why ‘Wintry Trees’ bears a poem it inspired, added by an 18th century Emperor who added his seal. Indeed Wen Zhengming‘s work was so highly prized that, later in the Ming era, it was widely sold and its high value (even in Europe) meant that it was routinely counterfeited.

The article outlines what we know about the artist, his life and times, and what he achieved with this piece. It is recommended that readers also view HENI Talks - Wen Zhengming’s Wintry Trees: Mourning and Reciprocity. 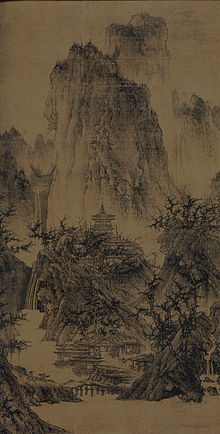 The Artist Besieged by a Family of Artists

Born Wen Bi in the city of Suzhou, Wen Zhengming was the second son of a father, Wen Lin, and a mother Qi Shenning. Wen Lin was dispatched to a distant province by the government when the artist was just two (and when his big brother Wen Gui was three) because he’d passed the most demanding imperial exam with the highest possible grade, making him a ‘jinshi’ or ‘Imperial Scholar’. But Wen Zhengming’s mum died at 32 when he was just six.

The family was quite a dynasty, with incredible connections. One of these had come from Wenzhou, and that was the professional art (hao) moniker that Wen Zhengming sometimes used to sign a lot of his work. They’d been notable military men and officials. But there was, amongst them, a clear love of art and nature too. It seems there was always wealth and Wen Zhengming was ultimately a court scholar for only three years (1523 to 1526) before he quit to concentrate on his work as an amateur.

Wen Zhengming’s father Wen Lin loved art. So did Wen Zhengming’s grandfather Wen Hong (also known as ‘Gongda’). Wen Zhengming’s father Wen Lin was a patron of Tang Yin (1470 - 1523), aka ‘Bohu’, who was one of the other four masters of the Ming dynasty. And in 1489, when Wen Zhengming was 19, his father sent him to study under Shen Zhou, aka Qi'nan and Shitia, (1427 - 1509) who was yet another of the four masters and the person who founded the Wu School of painting. (Shen Zhou used to let Wen Zhengming add bits of poetry to his paintings, by the way, so the youngster could write.) One should add that the so-far-unmentioned fourth master would be the latecomer Qui Ying, aka ’Shifu’ and ‘Shizhou’, (1494 - 1522).

A year or so later Wen Zhengming married the still-unidentified daughter of a contemporary of his father’s, a fellow ‘jinshi’ and high-ranking official. We don’t know her name but we know that her uncle was the great artist Xia Cheng, renowned for his paintings on bamboo. Wen Zhengming and his wife had an eldest son Wen Peng who was a seal-engraver and a younger son Wen Jia who was an artist. In the meantime Wen Zhengming’s big brother Wen Gui had a son, Wen Boren, who was an artist. Wen Zhengming had a great-grandson Wen Zhenheng who was a well-known horticultural designer. And lastly there was a great-granddaughter Wen Shu who was a highly-respected painter of flowers and insects.

The family was well-connected to the arts in other ways. When Wen Zhengming’s mum died his father got the great scholar Li Dongyang to compose the epitaph for her tomb. Other influences on the family included Wang Xianchen, who was entrusted with the building of the so-called ‘Humble Administrator’s Garden’ which sufficiently belied its name to be the subject of a lot of Wen Zhengming‘s poetry and painting.

The Wu (or Wumen) School

It seems that the Wu (or Wumen) School was notable for several reasons: 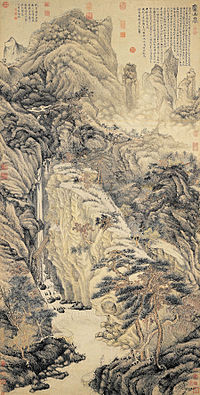 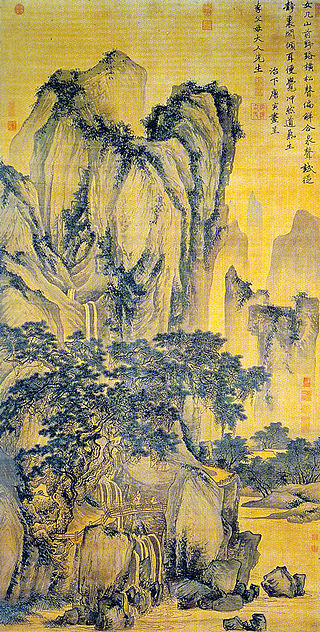 Above are examples of the work of the other three masters of the Ming dynasty. Left: ‘Lofty Mount Lu’ by Shen Zhou. Centre: ‘Mountain Road and Whispering Pines’ by Tang Yin. Right: ‘The Emperor Guangwu Fording a River’ by Qui Ying.

The famous Chinese philosopher Confucius, born Kǒng Qiū, (551 - 479 BC) was in essence a Taoist (also known as a Daoist) and he became revered as a deity, akin to a god. And Wen Zhengming was brought up in a Taoist / Daoist household to strive for lifelong harmony. Confucius preached that there were ‘three perfections’ that creative people should aspire to master. These were painting, poetry and calligraphy. Clearly Wen Zhengming was an adherent to such beliefs, as his mastery of all three demonstrates.

Wen Zhengming’s father arranged for him to be taught calligraphy (which at that time involved writing with a brush) by a master as a youngster. By the time he was 70 Wen Zhengming was considered the best in China. He would have worked with a carbonised pinewood ink-cake (maybe held in a Duan stone pot), oil, glue and a water-dropper. The styles he used included both ‘kaishu’ (a regular script) and ‘xingshu’ (a semi-cursive script). (One should explain for anybody new to calligraphy that ‘cursive’ scripts are joined-up whilst ‘semi-cursive’ scripts have thickened principal or vertical strokes.)

‘Wintry Trees’ is unpopulated, desolate, colourless, silent and rather washed-out (by using diluted inks) to convey age and the impact of isolation. It reflects the march of time on trees, even on mountains and on humanity. Yet there is a harmony, a balance, that is testimony to a calm reflectivity on the part of the artist and his guest, both old men. Comfortingly the stream will seemingly always run, like time, without them.

In summary here is an ancient and contemplative work that, in one sense, could have been painted today.

It is possible to purchase prints of Wen Zhengming’s work at numerous locations including the British Museum’s www.bmimages.com/preview.asp?image=00031158001.