Bichitr's Shah-Jahan ‘Shah-Jahan receives his three eldest sons and Asaf Khan during his accession ceremonies on 8th March 1628’ is a 30.6 x 21.3 cm illustration within a 58.4 x 37.0 cm page for the ‘Padshahnama’ (or ‘Book of Emperors’) which was commissioned by the Mogu

‘Shah-Jahan receives his three eldest sons and Asaf Khan during his accession ceremonies on 8th March 1628’ is a 30.6 x 21.3 cm illustration within a 58.4 x 37.0 cm page for the ‘Padshahnama’ (or ‘Book of Emperors’) which was commissioned by the Mogul Emperor Shah-Jahan as a piece of propaganda to celebrate his reign (over what is the modern-day Indian subcontinent and beyond) as it drew to a close. This initial panel, which now hangs in Windsor Castle’s Royal Library, was painted in 1656 to 1657 by Bichtr. We’ll examine the illustration, drawing on what The Royal Collection Trust tells us about what it depicts. Yet we will do so in the broader context of its execution and, in doing so, complement the information which is readily had from the owners and exhibitors. 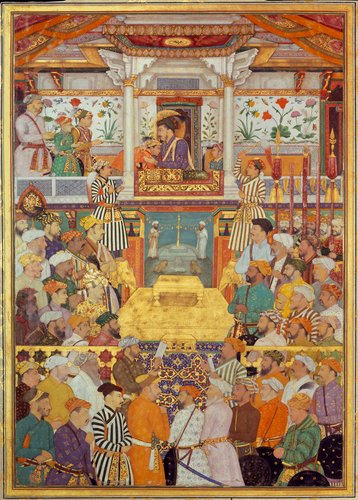 Above: ‘Shah-Jahan receives his three eldest sons and Asaf Khan during his accession ceremonies on 8th March 1628’

The Artist, an Understanding of the Timeline, Religion, Reality and Revisionism

Not much is known about the artist, Bichtr. So we have only a ‘fl’ (or ‘floruit’) date (using the Latin term) which indicates when we know that he was active. In his case we don’t know when he was born or when he died. Yet he is known to have been painting work of note by 1615, at which point he could have been a teenager. And he might still have been active in 1660 (a couple of years after this work, so we might be forgiven for assuming it was his swan-song). So he might have lived to be 60.

Yet, since the work was executed almost 30 years after the accession occurred, we can assume that it is a heavily-stylised reconstruction of the event and factually unreliable. Moreover we can assume that anybody’s memories of the accession would be hazy at best. So we can conclude that the work is revisionist and executed, in all likelihood, to fulfil a political purpose. That purpose may simply have been to remind the audience of the majestic precedents of the dynasty in power.

Bichitr was a court painter for two emperors, being Muhammad Salīm (who dubbed himself Jahangir or ‘Conqueror of the World’) and Jahān Shāh. Moreover, because Bichitr painted himself into one of his works for the former, we know what he looked like. The turban must mean he was Hindu, which is perhaps remarkable in a Muslim court and indicates a level of religious tolerance. 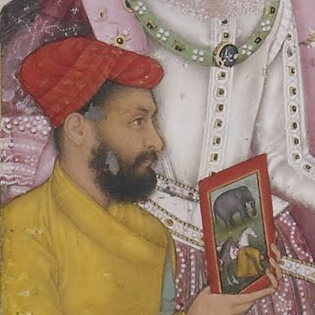 Above: A detail from another work, a portrait collage known as ‘Jahangir Preferring a Sufi Shaikh to Kings’ in which Bichitr is seen presenting a small work to the Mogul Emperor Muhammad Salim .

The Mogul Empire (it is also known as the Mughal Empire and the Moghul Empire, but is nothing to do with either the Mongol Empire to the North in what is now China or Moghulistan which is now in parts of what was the old USSR) ran from 1526 (when it was founded by an Uzbek warrior called Barbur) to 1857. It fell apart because the Sunni Muslim rulers had perpetually exploited the peasantry to subsidise their lavish lifestyle, effectively levying taxes as over 50% of earnings - mostly hitting the poor farmers - to do this for nearly three centuries. They were ultimately displaced by Hindus with money who favoured the Marathas (whose own empire lasted from 1674 to 1818) and the British who’d entirely displaced them by 1858 when Britain took over from the East India Company.

Although 50% taxes seem to be oppressive, one should add, in all fairness, that today similar levels of taxes are paid in China and Cuba, parts of Africa, parts of Scandinavia and the Low Countries, in Israel, Portugal, the Netherlands and even the USA. But in those days there was precious little provided in return.

The Focus – The Emperor Shah-Jahan

So who was Shah-Jahan? Also known as Shahab-ud-din Muhammad Khurram (and not to be confused with Jahan Shah, a much earlier Turkish sultan), he was the 5th Mogul Emperor and reigned from 1628 to 1658 when he was ill and deposed then held under house-arrest in the fort at Agra (which is the setting for the painting) by his third son until he died in 1666. That third son, Aurangzeb, features in the painting. (All four sons do; the youngest is behind his father.)

Since the painting was executed in 1656 to 1657 we can safely say that Shah-Jahan had organised this knowing that time was running out for him and to remind those around him of his own achievements.

That’s relevant. Because, just as his sons had turned on each other to fight for power, he himself had risen to power via a bloodbath in which he summarily dealt with three brothers and their followers. Yet he had then gone on to establish lasting peace and stability, and is remembered as being enlightened. Indeed, under Shah-Jahan’s leadership, the empire reached its zenith. We know him best for building the Taj Mahal as the tomb for his favourite wife, Mumtaz Mahal (also known as Mahd-i-Ulya), who is mentioned in the text accompanying this illustration. Graciously his third son allowed Shah-Jahan to be laid to rest beside Mumtaz Mahal when he joined her.

Who Else Makes the Frame?

Who else features in this chronicle? We don’t know who everybody is but we know some of the players and they’re mostly Shah-Jahan’s relatives (which would be no reassurance, in a sense, given the perpetual struggles for power and potential for backstabbing). They include:

What Does the Chronicle’s Text Say is Happening in the Illustration?

The text translates as: 'Hearing the good news of the arrival of the princes, Her Majesty Mahd-i-Ulya (Mumtaz Mahal) set out by imperial command...to receive them...The entire day was spent by the parents admiring the beauty of their grandsons. The next day...all the nobles and grandees went out by royal command to greet the princes and escort them and Yaminuddawla (Asaf Khan) to court. When the jharoka (a type of overhanging enclosed balcony) ... was illuminated by the rays of the Emperor's enthronement, the princes and Yaminuddawla (Asaf Khan) were allowed to pay homage'.

A Word on the Faith and Mindset

As we have seen, the Mogul Empire (which lasted from the 16th to the 19th century) was essentially Sunni Muslim and of course Islam dates from the 7th century. But it was not exclusively Islamic. From 1583 to 1605 (so early on) the emperor Akbar tried to run the empire under a ‘divine monotheistic’ (one god) faith called Dīn-i-Ilāhī that he’d made up using elements of Islam, Christianity, Buddhism and Jainism. This was quite an astute political move to try and get different peoples to unite in a commonality. But it pleased nobody (one can see why Hindus, who believe in many gods, would not like it, but they were not alone). So it failed.

These were of course bloody times around the world. And we should bear several elements of beliefs in mind before judging the likes of Shah-Jahan.

We don’t know what Bichitr thought of his patron. But Shah-Jahan was clearly an enlightened supporter of the arts and, through his regime, had acquired sufficient wealth to allow painters and architects to leave work that we can still admire. In the case of this illustration Bichitr is credited with creating a composition with symmetry and balance. The large globe is a reference to the much-vaunted ‘world rule’ that the emperor claimed, and of course the lamb-and-lions are symbolic references to strength and plenty that in juxtaposition refer to peace and harmony (think of Biblical references to lions laying down with lambs).

This of course is a retrospective. By and large Shah-Jahan’s rule did indeed turn out that way.

How good was Bichityr? Well the encyclopaedia Britannica speaks of his ‘faultless technique and majestic formality’. There is evidence of him having studied some European art. And, actually, the court was certainly in touch with James I of England (James VI of Scotland) at that time so the ties to the rest of Europe (the lands between India and England) might well have been quite extensive albeit largely as undocumented as is the artist’s life. Yet Bichtir used perspective that had hitherto been considered to be a Western technique, he added shadow, and he featured cherub-like figures (which is very Italian) in his work.

In summary here was a Hindu artist who is said to have probably been the most brilliant of all court painters during the period of the intensely-Islamic Mogul Empire. For more information on the work see www.openartsarchive.org/resource/open-arts-objects-bichitr-and-ramdas-shah-jahan-receives-his-three-eldest-sons-and-asaf.

It is possible to affordably buy unframed prints of work by Bichityr. For example at https://trulyart.com/products/portrait-of-raja-bikramajit-1620-bichitr and https://www.heritage-print.com/jahangir-preferring-sufi-sheikh-kings-c-1618-14857475.html.