Raphael (1483 – 1520) Raphael (full name: Raffaello Sanzio da Urbin) was a master painter, printmaker and architect of the Italian High Renaissance - really the last notable artist of that era - and a so-called ‘mannerist’ who to this day is renowned for his expansive, ca

Raphael (full name: Raffaello Sanzio da Urbin) was a master painter, printmaker and architect of the Italian High Renaissance - really the last notable artist of that era - and a so-called ‘mannerist’ who to this day is renowned for his expansive, calm, harmonious and serene compositions, his religious art, his idealised beauty and his sense of colour. As a Renaissance man he merged art, science, mathematics, biology, philosophy and more. And, in his time, was called ‘The Prince of Painters’.

He is rightly considered to be a worthy rival of Michelangelo and Leonardo da Vinci, both of whom he admired and from whom he learned. Indeed there are some who believe Raphael surpassed these contemporaries despite a relatively short life during which he created quite a legacy (in part by running a couple of big studios and getting a lot of work copied), something which might well explain why Michelangelo didn’t like him (though apparently Michelangelo didn’t like Leonardo da Vinci either, and they’d been taking swipes at each other since 1503 when they’d been commissioned to work side-by-side – depicting two different battles on the same wall). So there was obviously a fierce rivalry going on here and Raphael wasn’t blameless. For his part he bribed a guard to get a sneak peek at the Sistine Chapel then did his best to get Michelangelo thrown off the job by the Pope because he reckoned he could do better.

In the opinion of many artists who came after him, and that of Sir Joshua Reynolds the English portrait-painter is an example, Raphael’s self-belief was justified. He was probably the most accomplished all-rounder even if he was pipped in some respects by his rivals. For that reason Raphael has been much-studied over the 500 years since his death. Yet it seems that he’s been side-lined to an extent on account of his losing the PR war – simply because over successive centuries there have been more publications, more column-inches, about his rivals Michelangelo and Leonardo da Vinci.

Left: An assumed self-portrait of Raphael. Centre Left: The artist’s father, Giovanni Santi, painted by himself when Raphael would be 7 or 8, as Christ supported by two angels in 1490. Centre Right: Raphael’s ‘Madonna of the Goldfinch’ (1505) which may feature his memories as an 8-year-old of his mum. Right: ‘La Fornarina’, Raphael’s mistress in 1519 just before his death.

Raphael was born in Urbino on the east coast of Italy to a father - Giovanni Santi - who was a tolerably-good painter employed by the Duke of Urbino, and a mother - Mŕgia di Battista di Nicola Ciarla – about whom precious little is known. Though one assumes this was a happy family because when she died (and little Raphael was just 8), her husband spent more than twice as much on candles as he’d spent when his own mum had perished. Sadly, three years later, and when Raphael was only 11, he was to die too. But by then Raphael had already been painting with his dad for those three years. He’d had some help from his step-mum (Giovanni Santi had been quick to remarry, which was understandable with a youngster to care for, and she seems to have involved Raphael in work at his dad’s studio). An uncle, a priest, was also to care for him. Moreover in the studio he seems to have been influenced by two very able draughtsmen. One was Paolo Uccello, who was a mathematician and painter whose grasp of perspective reflected these twin interests. The other was Luca Signorelli, who was particularly good at dealing with foreshortened figures. Moreover Raphael seems to have been apprenticed when he could have been as young as 8 to a third painter, Pietro Perugino, about whom little is known other than that he was talented-but-idle. And a fourth influence seems to have been a young court painter called Timotei Viti. Nevertheless with such help, orphan or not, Raphael was already unstoppable.

By 1500, at just 17, he was regarded as a fully-trained master. So he set to work, as a rather nomadic and itinerant artist though he was largely Florence-based, on church altarpieces and frescoes. These went so well that, when he was just 26, he beat Michelangelo and Leonardo da Vinci to win a contract to paint frescoes in the Vatican for the notoriously-wobbly Pope Julius II. Ergo he was off to Rome, where he lived for the rest of his life. Contemporary opinion was that Raphael got the job because he was deemed to be better when it came to colour. Certainly he’d only done fairly small-scale work up to then. But he was offered a break - probably via an introduction by his pal Donato Bramante who was an architect and painter - and seized it.

Above: ‘The School of Athens’, and a selective enlargement (1510). Much of such executions would already be by pupils and assistants, reflecting Raphael’s organisation and commercial acumen. Intriguingly the so-called ‘weeping philosopher’ Heraclitus in here was based on Michelangelo, made to look isolated and glum, and would have intentionally rattled the latter.

Raphael became most famous (see below) for his four ‘Raphael Rooms’ in the Vatican’s Apostolic Palace, ‘The Sistine Madonna’ for a church in Piacenza, and his ‘Transfiguration’ which was his last work and intended for a French cathedral though it remained in the Vatican.

Left: One of the Raphael Rooms. Centre: ‘The Sistine Madonna’. Right ‘Transfiguration’.

Raphael was considered to be a pleasant man. Though it is well-documented that he was not above bribing people to let him into other painters’ studios and even their private homes, he seems to have run a happy ship in respect of his own studios and had at least 50 assistants and apprentices - never mind collaborators - who’d execute his designs to create frescoes, engravings and more. In this he was really very forward-thinking and modern. He was rather a ladies’ man and, though he was reluctantly engaged to a cardinal’s niece, he managed to stave off marriage until she died (she just beat him to it) and was said to have expired at 37 from excesses associated with his passion for his lover Margherita Luti, a lowly baker’s daughter who was to be provided for in his will. Mercifully he was only ill for a couple of weeks, giving him time to sort out his financial affairs (and he’d enjoyed considerable commercial success given the papal patronage). He died on a Good Friday, just as he was born on a Good Friday (and, ironically perhaps, this is being written of him on a Good Friday!) 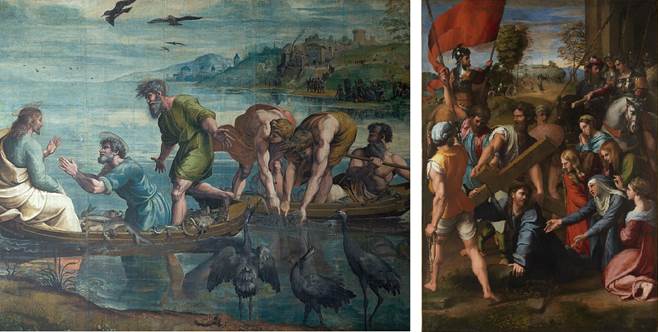 Raphael’s funeral was lavish. His coffin was carried by four suited-and-booted cardinals and his lifeless hand was kissed by the Pope. His marble sarcophagus carries the legend ‘Here lies that famous Raphael by whom Nature feared to be conquered while he lived, and when he was dying, feared herself to die’. 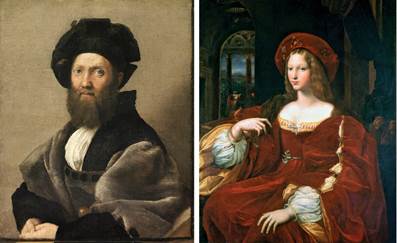 In summary Raphael was a game-changer, a true ‘Renaissance man’ in his being a polymath and an artist who was the equivalent of today’s top artists - half a millennium later - in that he was adept at cashing in on his skills and organisational talent. It says something of him that he was stand-out even with Michelangelo and Leonarda da Vinci, with whom he had to share the same space-time, breathing down his neck.

You can easily and affordably buy unframed prints of his work. The National Gallery site at www.nationalgallery.co.uk/products/raphael is one place to obtain these. Originals are pricey. Raphael’s ‘Head of a Young Apostle’, a sketch executed in 1519, sold for Ł29.7 million (.8 million) at Sotheby’s in 2012. And another sketch, ‘Head of a Muse’ executed in 1510, sold for Ł29.1 million ( million) at Christie’s in 2009. Neither of these would fill a wall. If you want anything more grandiose you’ll probably have to outwit the Swiss Guard to get it.