Festive Framing We all tend to buy, give and receive a lot of ephemeral tat at Christmas. Much of it is expensive. But, when it comes to making Crimble meaningful, some of the most endearing gifts are truly personal, often inexpensive, and framed. This article looks

We all tend to buy, give and receive a lot of ephemeral tat at Christmas. Much of it is expensive. But, when it comes to making Crimble meaningful, some of the most endearing gifts are truly personal, often inexpensive, and framed. This article looks at some great ideas for items that anyone can create in the run-up to December 25th. And beyond. Many of them are thrifty.

If you decide that you want to finally put your family photos into a standard set of frames then why throw away the old ones if they can be utilised to make some great seasonal decorations? Here are some lovely wintry creations that just take a little thought, some gold and silver spray, tinsel, cones, old tree baubles and ribbon. Even fragments of wrapping-paper, used greetings-cards or broken jewellery, together with paper-chains and glitter, can be used to great effect. This is the sort of creativity that was the staple of Blue Peter programmes for decades; generations, even!

As adults we want to do a job properly and demonstrate skill in the process. And it's important to teach children not just let them go on some entirely-random journey of discovery. But, that said, when kids produce something they should be proud of then it's likely that you as an adult will treasure it for decades. So give them a chance to create frames, to fill and embellish them, and to put their own stamp on Christmas.

Be Inspired by the News

Here's a cheap-but-emotive idea. The Chinese father and son below have been posing for a black-and-white shot together every year for the last three decades. The Daily Mail ran a story on them earlier in 2018. In the last pic they are joined by a grandson. Any of us can do the same. And it's an idea that's as cheap as chips. But it might be worth buying a few dozen frames, so they'll all match, when you start. And it is worth using the same camera too, so that the finish is comparable.

Go for a family pic

Rather than have just a couple of you in the frame, you might as well go for the entire family. And get into the Christmas spirit when it comes to the colour palette. So, inevitably, you need red.

We all have ideas of our own. Though sometimes our imagination can be sparked by the work of others. 'Cribbing' and 'copying' are harsh terms. Think of it as 'sampling'. The sort of creative posters that you see below are reliant on an ability to create child-like illustrations (some of us never lose that ability) and to use some typography to put together a personalised homage to one or more favourite family-members. 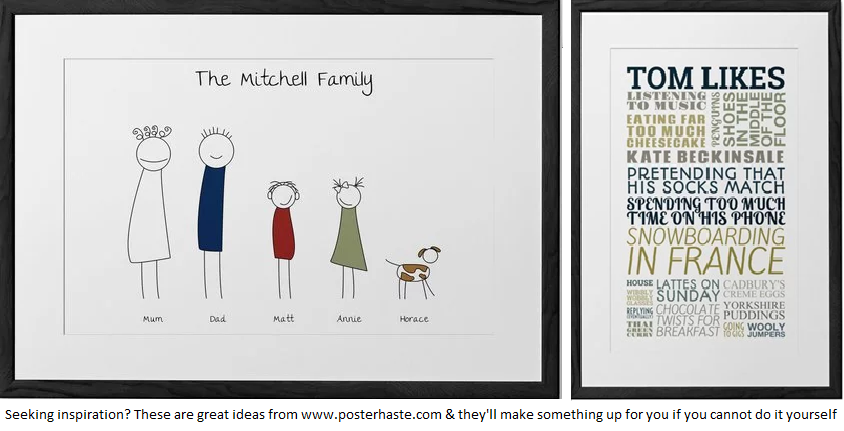 It seems relatively easy to do something with Scrabble tiles or similar too. The frame and contents below were designed to celebrate a birthday but it should be simple to do something similar for Yuletide (which apparently has nothing to do with Yul Brynner). And put it together yourself. 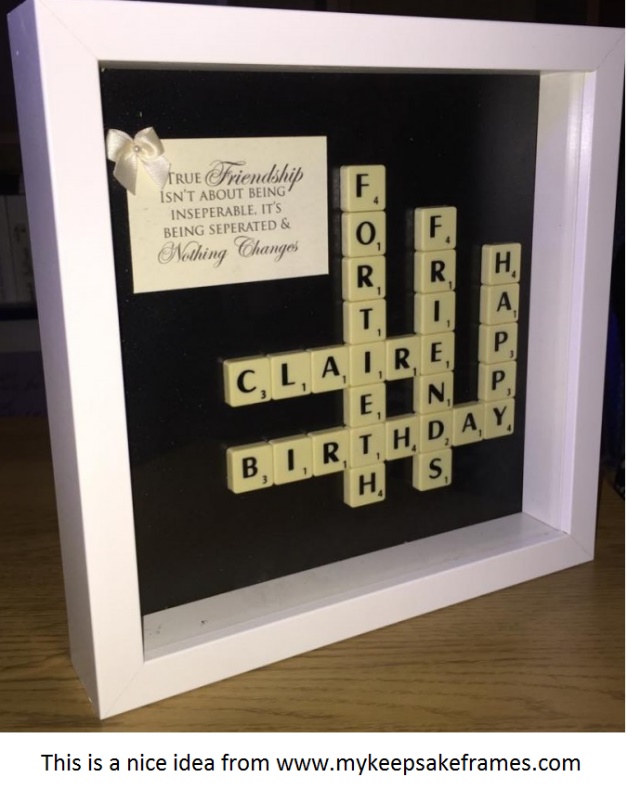 With the evenings still drawing in, at least until 21st December and the winter solstice after which the days will lengthen again, we have time to explore attics. Faded old photos might not mean much to anyone at first glance. But even the drabbest (see the Christmas celebration captured below in a Northern factory) will have poignancy for anyone who can recognise themselves or somebody that they love in the shot. So go and look. And, if you find a gem, get it framed. Get it labelled. And give it to somebody who will ensure that the history it encapsulates is preserved for posterity. 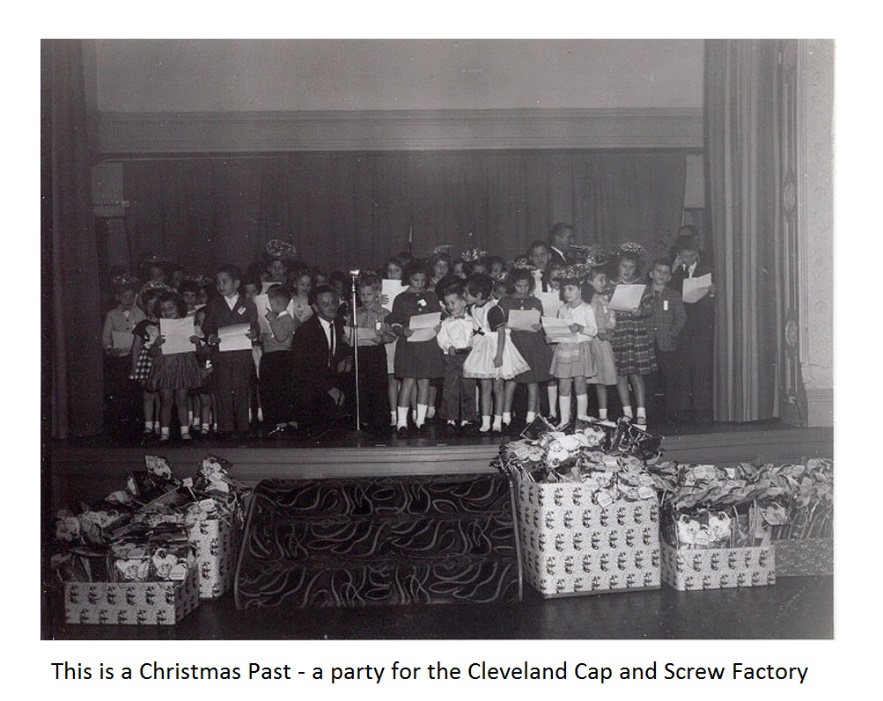 Carol lyrics might be a good source of Christmassy expressions which you can encapsulate. Again kids can help. Show them how to create snowflakes by folding and cutting paper. And don't just tell them what to do. Invite them to contribute solutions. They may surprise you with their thoughts!

But this won't just stop with Boxing Day. New Year will give you a second bite of the cherry. Think of New Year's resolutions, for example. And even calendars. Ring in the changes with something new on your walls. 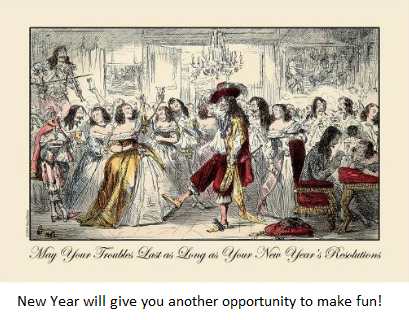 'Hope springs eternal', they say. And that's never more evident than when the New Year rolls around. Publishing your intentions to finally get your life to run to plan is a good move. Go public. Declare your New Year's Resolutions. Then it's harder to backslide. And putting reminders on your walls is perennially popular.

So the season to be jolly is a moment to reflect on what's important to all of us. It's a moment to celebrate the past and look to the future. This is a time when we traditionally feather our nests and undertake more do-it-yourself tasks than at any other time of the year, embellishing our homes with sentimentally-precious artefacts and statements that reflect our core values as individuals.