Colour-Blind Artists This article isn't about Van Gogh. Because it seems that he wasn't colour-blind. But it is about other notable artists who were. So that would include such luminaries as Monet, Turner, M'ryon, Degas, Cassat, Pugh and Blake.

And Why You Shouldn't Avoid Them. Or Their Art.

This article isn't about Van Gogh. Because it seems that he wasn't colour-blind. But it is about other notable artists who were. So that would include such luminaries as Monet, Turner, M'ryon, Degas, Cassat, Pugh and Blake. 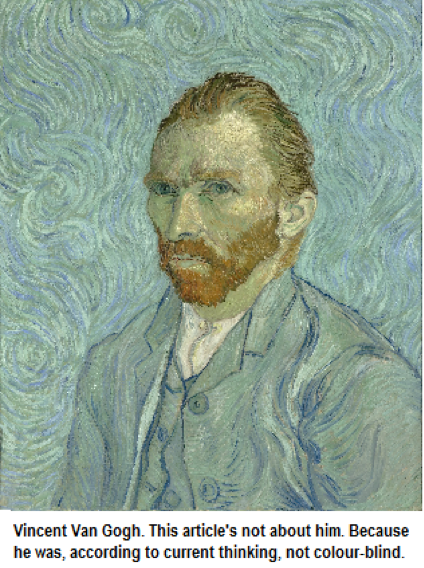 What this article does do is explain the advantages of colour-blindness and ask the question you must all be pondering i.e. 'Why would a seemingly-disproportionate number of men afflicted by colour-blindness be recognised as great artists by audiences amongst whom the vast majority should be able to spot something amiss with the hues, shades and stains, pigments and casts, tinges and tones, tints and tinctures'?

Just what is colour-blindness?

If you're reading this and you're colour-blind then you're either one of the 8% of men or ?% of women who are afflicted. I say this, not as an ophthalmologist but as somebody for whom the term 'colour vision deficiency' is an understatement, because I am aware that it has advantages. 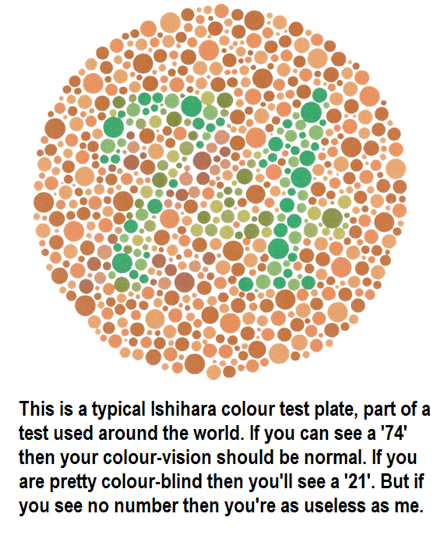 I should explain that we tend to think of red-green colour-blindness (aka deuteranopia) because this is the most common form. But some people have a blue-yellow problem (aka tritanopia; just imagine what it would be like to be attacked by wasps coming out of a blue sky if you have this variety). And a tiny minority have absolutely no colour vision (aka achromatopsia). Whatever the variety, the problem is duff cones (the rods are OK). And the cause is usually hereditary (on the X chromosome, which men only have one of whilst women have two; hence the chances that women won't have it are 8% of 8% or ?%). It's inherited from the grandfather and passed through his daughter to her sons in 50% of cases. But it can be a component of shaken baby syndrome, accidents or traumas to the eye and/or brain. Or caused by diabetes, vitamin A deficiency, solvent abuse, or drugs used to treat TB and malaria. Colour-vision anyway deteriorates with age because of the macular degeneration involved, though one of the advantages of having new lenses is that colour-vision will usually improve. 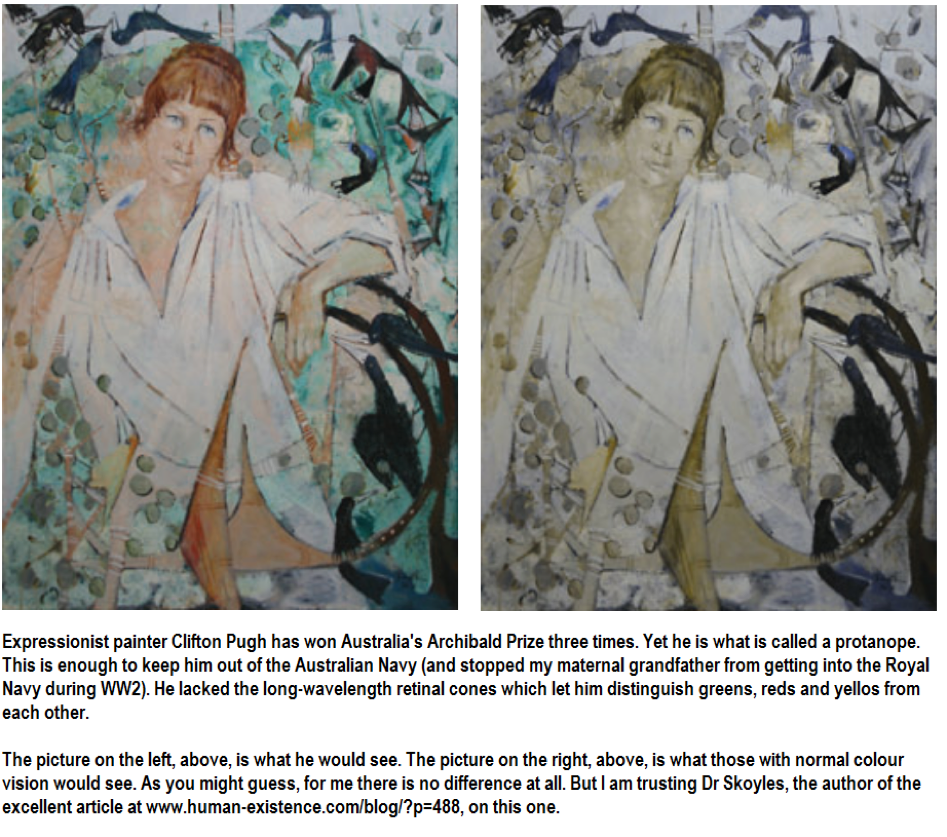 Odd. For anyone who cannot imagine what it is like to be colour-blind, here are a few examples I've noted though it seems like we're often afflicted in slightly different ways:

Most people who are colour-blind will adopt coping mechanisms. That might, for example, even involve realising that the red light is always at the top of traffic-lights but that the green one is at the bottom. And that the one in the middle is therefore amber. Simples! Bearing in mind that traffic-lights can 'disappear' amongst other lights, it makes sense to look for lights on big sticks at junctions. This precaution falls over, however, when driving overseas where traffic-lights are strung up on wires.

Afflicted artists have their own strategies for dealing with colour. Charles Meryon, the 19th century French artist, is a prime example. He simply avoided it.

Many artists have stuck to etching or, alternatively, become sculptors. Anything to avoid colour. American painter Peter Milton is an example of that. He was entirely unaware, for years as a painter and even a lecturer, that he was botching the colours. When he realised that he was using the wrong ones he just did away with the lot and went monochrome. See www.npr.org/2014/11/16/364092778/for-one-artist-colorblindness-opened-up-a-world-of-black-and-white?t=1541684018402 for a super article on that and, below, an example of his work. Yes it's all in black and white. 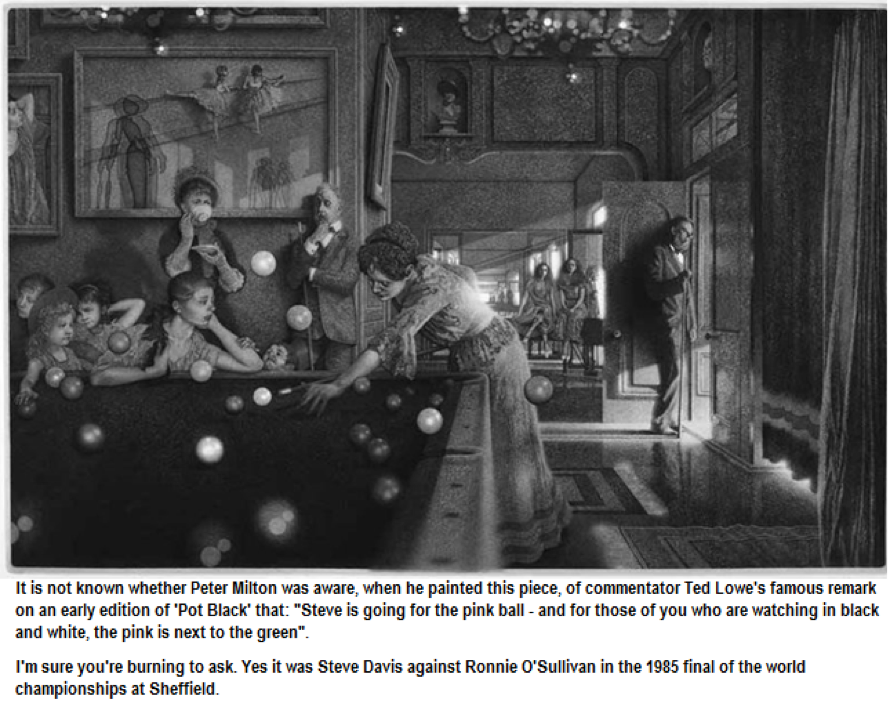 Not all great artists have avoided colour. JMW Turner is a prime example. His work 'The Fighting Temeraire?, voted 'The Greatest Painting in Britain? (which begs the question whether most of our home-grown art hasn't been snapped up by wealthy foreigners), managed to generate blazes of colour which assumedly approximated to what Turner saw. (Though, in all fairness, the vessel's masts and rigging had been removed by the time it made the journey he was supposedly documenting, and it was being pulled by two tugs not one, and it was moving up the Thames and eastward so the sun should have been in front of it not behind, but let's not split hairs.) Monet was the same. You could brand these people as 'impressionists' because, for most onlookers, what ends up on the canvas is not an accurate depiction of what they see. Yet there is, perhaps, when it comes to all these painters, a suspicion that the artist is seeing more than what the audience sees' and not less. And this perceptual gap is sufficient to provoke genuine envy. 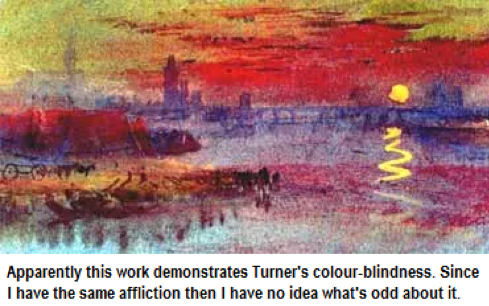 Famous or otherwise, colour-blind artists can resort to obvious coping strategies including asking a woman. This comes in handy if paints are not clearly labelled, especially when they're being mixed on the palette. My brother (see below) used to ask our mum. 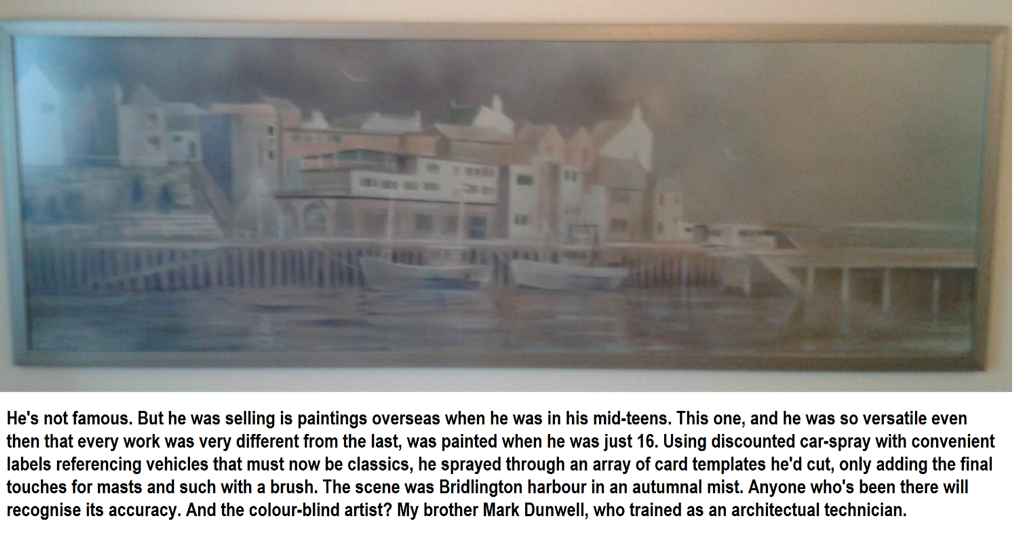 I should add that I won a design competition with 1,800 entries simply by using limited colour. I could tell black, white, maroon and silver apart with some confidence. So I stuck with that. And got A level Art by drawing. So anyone out there who is put off art by being colour-blind should take heart and give it a go. Like me, you may not be a great artist but colour-blindness shouldn't limit what you produce. Nor, when you're looking to purchase or hang art, should it stop you from choosing work by those with colour-blindness.

According to the Van Gogh Museum, and its staff ought to know, the latest theory is that he wasn't colour-blind but that his reds have been more prone to fading than other colours over the years. Moreover Van Gogh's work supposedly displays knowledge of what were contemporary colour theories that he could never have applied had he been colour-blind. Read about that at www.vangoghmuseum.nl/en/125-questions/questions-and-answers/question-52-of-125

Who cares if these guys (and Ms Cassat; remember that 1 in 17 people with colour-blindness is female) were colour-blind? They were great. And their work would enhance the ambiance in any home, public building or office.