Turner Corner Landscape artist Joseph Mallord William Turner painted 'The Fighting Temeraire', a work which in 2005 was named as 'The Greatest Painting in Britain' by the BBC Radio 4 audience who gave it 27% of their votes.

Landscape artist Joseph Mallord William Turner painted 'The Fighting Temeraire', a work which in 2005 was named as 'The Greatest Painting in Britain' by the BBC Radio 4 audience who gave it 27% of their votes. So there is a fair chance that you know it. Meanwhile you may well be aware that the artist is also known as 'The Painter of Light' though, to be fair, painting light is what all artists do anyway. Yet you probably didn't realise why the aforementioned masterpiece, for which JMW Turner is rightly famous, is significant but largely a manifestation of artist's licence. And you are unlikely to know much more about him unless you are fortunate enough to have watched 'Mr Turner', the 2014 Mike Leigh film featuring Timothy Spall. Though, if you've got sharp eyes, you'll have seen 'The Fighting Temeraire' make an appearance in at least one other British blockbuster!

This article explains why Turner was remarkable. It will not only outline the cultural relevance of his work but proffer an insight into the man himself. And it should engage your interest sufficiently for you to consider purchasing a print of his work to bang up on the wall.

Was Turner the greatest?

Turner has competition. We could argue that Lucian Freud, John Constable, Francis Bacon, David Hockney, William Blake, Banksy and Damien Hurst all were (or are) better. But a couple of years after the aforementioned Radio 4 poll Jonathan Jones, writing for the Guardian, grudgingly conceded that it is probably JWM Turner. Follow this hyperlink if you want to know why. www.theguardian.com/artanddesign/jonathanjonesblog/2007/oct/30/turnerthegreatestbritishar

Turner and I appear to have something in common. And not just colour-blindness. Perhaps I should explain. I discovered, whilst researching this article, that in 1842 'The Athenaeum', a British literary magazine which later merged with other publications to become 'The New Statesman', derided Turner when it wrote 'This gentleman had, on former occasions, chosen to paint with cream, or chocolate, or currant jelly - here he uses his whole array of kitchen stuff'. Setting aside the thought that self-evidently Turner could paint a better picture armed only with the contents of his larder and his eyes shut than the reviewer would manage if he'd had access to Windsor & Newton's best, this reminds me that, as a teenager who couldn't afford paint, I did something similar with comestibles. And I certainly used coffee, chocolate and icing-sugar; whatever was in my mum's kitchen cupboards.

But I digress. Turner's startlingly colourful depiction of the 'The Fighting Temeraire' charts the end of an epoch because, as the full name 'The Fighting Temeraire, tugged to her Last Berth to be broken up' explains, this voyage was a one-way trip to the knackers-yard for a vessel that had been instrumental in saving Nelson's flagship 'The Victory' during the 1805 Battle of Trafalgar. And, actually, much of the artist's work documented this period of transition to the industrial age. So the fact that Turner supposedly captured the scene at sunset ('going west' has always been a euphemism for going to one's death, west being where the light disappears at the end of the day) would hardly have been an accident.

Let's address that properly. In fact the ship had already seen her masts and rigging removed before she made her final journey. She was towed by two steamers and not one. And, since the Thames flows from west to east, when she was going upstream at dusk the sun would have been in front of her and not astern. Still, let's not split hairs or carp at how Mike Leigh glossed over this discrepancy in the film! 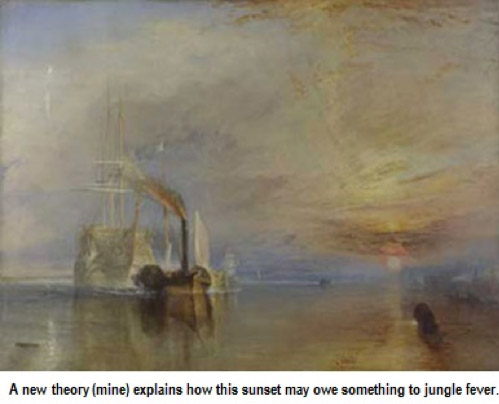 'So what's this about malaria?' I hear you ask.

Well I happen to know that colour-blindness is either acquired or inherited. In my case I got it the traditional route; my mum's dad was colour-blind and therefore I had a 50% chance of inheriting the X-chromosome gene. Being one of four sons I have always been intrigued by the fact that two of us are colour-blind, as is statistically most likely, but we're the two who inherited the artistic talent too. The siblings with good colour-vision have no artistic talent whatsoever. That'll have stopped them being smug about their colour-sense! 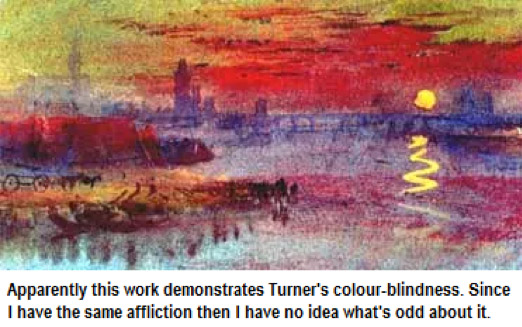 Yet Turner may, rather than inheriting the gene from his maternal grandfather, have acquired the condition another way. One route to such an acquisition is by taking anti-malerial potions. And Turner was well-travelled (he certainly went to Switzerland, France and Italy). So he could have contracted malaria and had treatment for it. Potent drugs date from 1638 when the malaria-stricken wife of the Viceroy of Peru got some tree-bark from an Inca herbalist; that was later refined as 'Jesuit's Powder' and then modified to produce quinine and other derivatives. Such drugs (e.g. Plaquenil, though that's more modern) are known to sometimes cause colour-blindness as a side-effect.

Is there any other evidence of this? Maybe not. It's just a theory. But it is indeed known that Turner travelled to Venice (a city which has historically had issues with malaria; the disease still occasionally kills in Italy) and that he was colour-blind. In fact two pairs of his spectacles, one pair at Tate Britain and one pair sold at auction in late 2003, are of such different prescriptions that one leading ophthalmic surgeon has concluded that this means Turner was colour-blind and then suffered from cataracts but simply 'painted what he saw'. Go to www.theguardian.com/uk/2003/nov/18/arts.artsnew if you want to know more.

Speaking of redcurrant jelly, I am reminded that Turner was always attracted to not just young and pretty girls but widows, and had long-standing affairs with both Sarah Danby and Sophia Caroline Booth. And probably his housekeeper too. Meanwhile he had other admirers who suffered for their unrequited love. Moreover he had illegitimate daughters. So, though temperamentally he appears to have been irascible, women nevertheless flocked to him. Indeed the Daily Mail ran an article (see www.dailymail.co.uk/femail/article-1216132/Sex-feuds-money-What-Britains-greatest-painter-JMW-Turner-REALLY-prized.html) which tells us 'The lusty Turner sought it, indulged in it and drew it in considerable detail, though this is an aspect of the great man's work that is seldom dwelt on. He made numerous erotic sketches and paintings. Some are plainly pornographic. His notebooks show that even at the age of 70, he was drawing close-ups of private parts and copulation'.

For whatever reason, JMW Turner was a genius who left behind him 550 oil paintings, 2,000 watercolours and 30,000 paper works. Surely you'd like some (or all) of them on your walls.