Blakes Heaven William Blake (1757 - 1827) is widely credited as being the first multi-media artist. If you cast your minds back to the 1999 - 2000 millennium celebrations in London's docklands, Peter Gabriel, the former 'Genesis' frontman who was largely responsib

*Though, now that I've mentioned it, no doubt some of those who arrive on this page will have been transported here by virtue of Google Search 'divine inspiration' and they'll be scratching their heads. Still, now you're here, if you're one of them, you may as well read about Blake the artistic genius (rather than the 27th century no-hoper).

William Blake (1757 - 1827) is widely credited as being the first multi-media artist. If you cast your minds back to the 1999 - 2000 millennium celebrations in London's docklands, Peter Gabriel, the former 'Genesis' frontman who was largely responsible for the show's sound-track in the dome, chose William Blake as his central theme precisely because the artist had dabbled in - and mastered - several mediums.

Blake was responsible for impressive fine art ('Newton' and 'Nebuchadnezzar' spring to mind) as well as for poetry. Remember 'Tyger Tyger' and 'Auguries of Innocence'? And even lyrics ('Jerusalem' is widely said to be England's national anthem). Unarguably his work, as I'm going to show you, was ahead of his time. But much of his inspiration stemmed from religious experiences. This article ties those experiences into his work, flags up a few pieces that might look good on your walls, tells you where to obtain the prints, and suggests some framing options.

William Blake and Blake's 7 have little in common except that neither was recognized as being great during their lifetime. In William Blake's case, though, this was entirely undeserved. 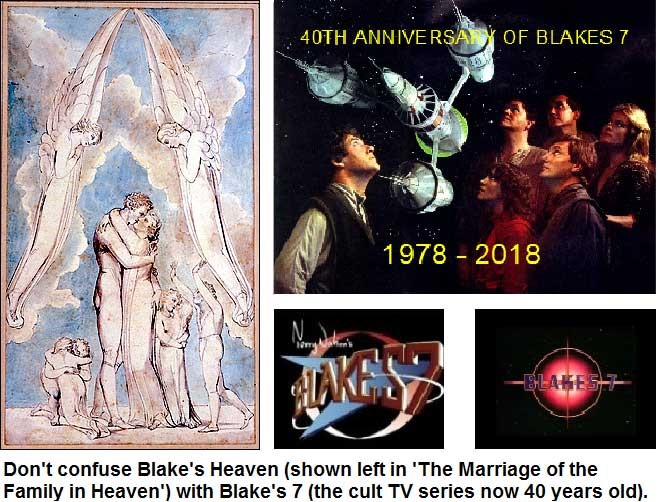 Blake's Divine Inspiration and the Angel Gabriel (not Peter Gabriel)

Blake spent much of his life creating work that was at odds with what one would expect of organised religion. He was, to put it mildly, immoderately liberal in the way he mixed elements of the Bible, and usually obscure characters from the Old Testament, with his own fabrications. So he challenged church authority. And he even referred to the God of the Old Testament as 'Nobodaddy' because, to his mind, nobody would want him as their dad. But importantly his faith was unshakeable. Moreover, apart from his art he was a mover and shaker who expressed great concern for the downtrodden. He showed particular concern for chimney-sweeps who in that era often died of malnutrition, mistreatment, suffocation or testicular cancer. And Blake was vehemently against slavery or racial discrimination. Just as he was against the oppression of women and once got into a scrap with a guy who was mistreating his wife in public.

The roots of his beliefs are to be found in rather odd experiences which he candidly reported without, as far as one can see, worrying that he'd be branded as a nut-case. The first appeared to be when he was just four years old. He told his parents that God had put his face to the window and peered into their home. Then, when he was 9, he claimed to see a tree full of angels as he was walking through the countryside in Peckham (it shows you how long ago this was). He described their 'bright angelic wings bespangling every bough like stars'. When Blake's brother died he claimed to have seen his spirit leave his body and clap his hands for joy. Later Blake insisted that brother appeared to him in a vision and told him how to develop his unique engraving system (one which I'll explain later). On another occasion he watched haymakers at work and believed that he saw angels walking amongst them. He reckoned that he spoke repeatedly with the Angel Gabriel (not to be confused with Peter Gabriel) as well as with Mary (Christ's mother) and a constant stream of both archangels and historical figures. Maybe most bizarrely he believed that he was visited by a huge and ghostly flea (the equivalent, I guess, of James Stewart's friend the six-foot rabbit Harvey). Blake repeatedly referred to such events, visitations and visions in his letters to friends.

Blake Would be Drawing for Marvel Comics

We should not scoff. Many readers will have their own faiths and should not rush to dismiss as fanciful a claim to have had experiences that elude us lesser mortals. Yet, whatever his inspiration, it drove William Blake to generate astonishing creations that are essentially a quarter of a millennia ahead of their time. His 'Ancient of Days' was first painted in 1794. Blake often knocked out very similar versions of this, showing a mythical character whom he called 'Urizen'. Urizen somehow epitomises reason but relates to a Book of Proverbs reference to God when it speaks of how 'He set a compass upon the face of the earth'. Yet this figure, holding dividers and peering out of the light upon a so-far-unlit world below him, boasts the sort of musculature that super-hero cartoonist Stan Lee was depicting in 1962 when he first drew the Norse thunder-god Thor. 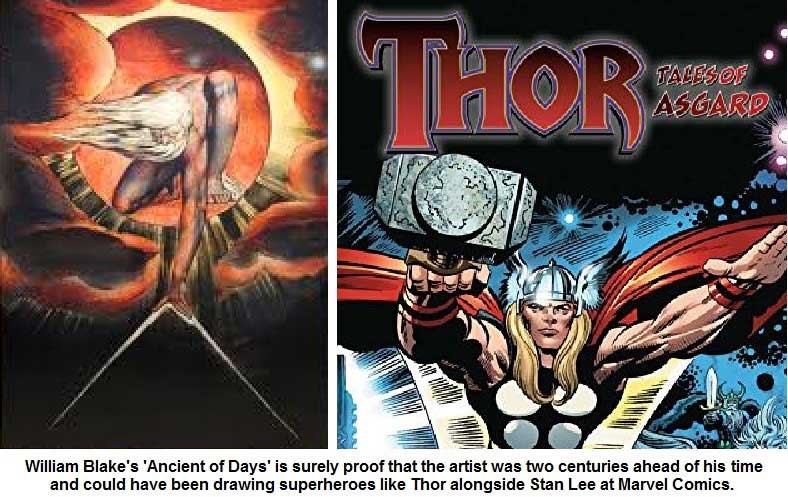 There's not much argument about this. William Blake wasn't conventional. He and his work were off-beat. And he anyway lived and worked in a time when the world was being remade. The French Revolution of 1789 to 1799 occurred when Blake was 32 to 42, so in his prime, and doubtless such a social upheaval would have given many contemporary artists and thinkers the courage to challenge the status quo. He was an anti-royalist (and once got into huge trouble for uttering criticism of the king as he turfed a trespassing soldier out of his garden). Blake also refers to great revolutionary thinkers such as Isaac Newton (the discoverer of gravity who predated him, dying in 1727). Though he is a little ambivalent in respect of the application of such science, condemning the 'dark satanic mills' (in the lyrics of 'Jerusalem') which were arguably the inevitable consequence, during and after the Industrial Revolution (which lasted from 1760 to 1840, so it coincided with his own tenure) of discoveries such as Newton's of how God's universe functions.

In a sense, then, we could say that Blake was eclectic. His inspiration came from everywhere and he wasn't afraid of mixing it all up. 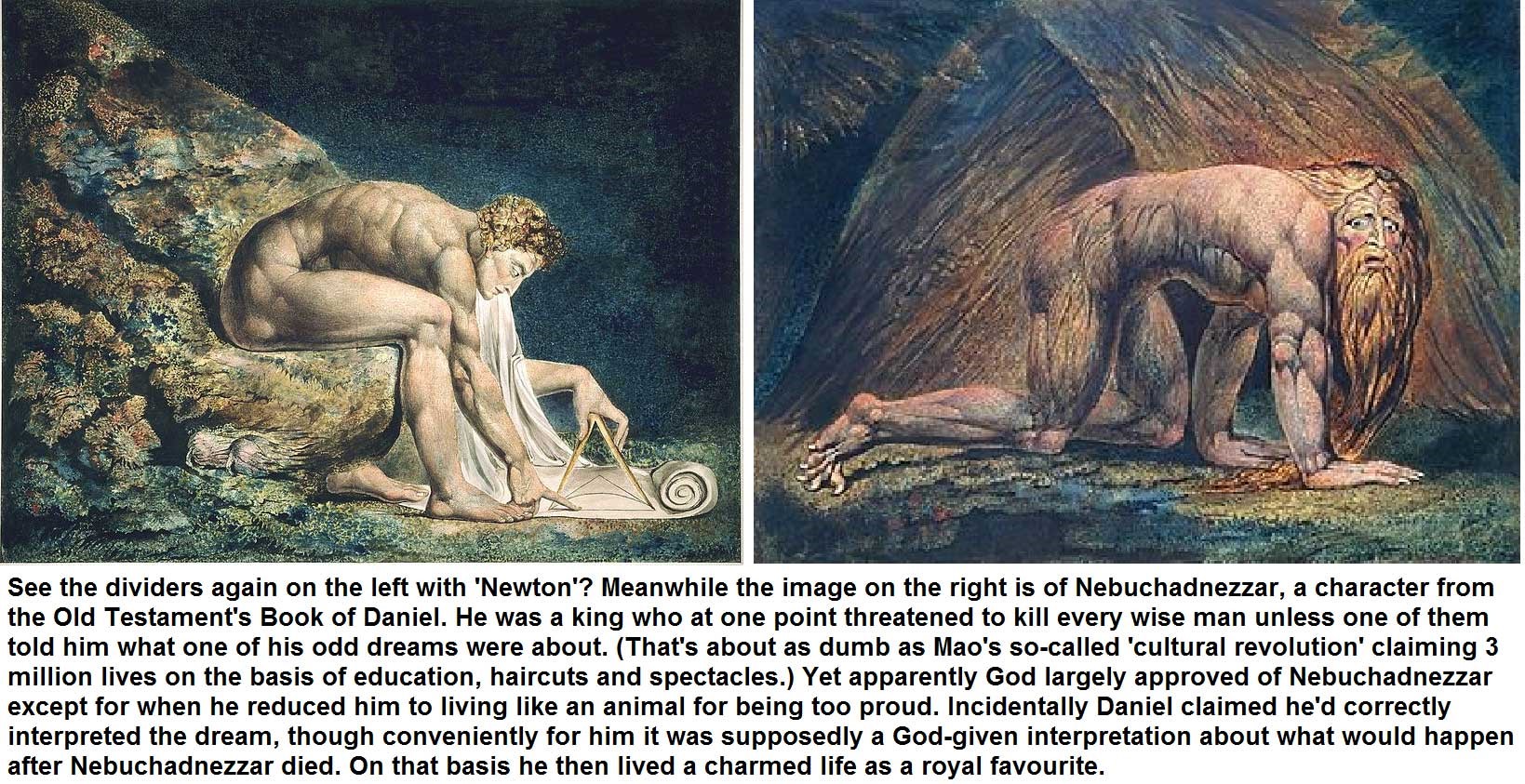 Indeed you have to look no further than the lyrics of 'Jerusalem' to see how Blake stuck every ingredient into the blender. Hubert Parry composed the music in 1916 but Blake had penned the lyrics in 1804. They refer to a fanciful myth that Jesus, as a lad, had travelled to England with his great uncle Joseph of Arimathea (who was apparently a trader and King Arthur's great great great great granddad, coming back to bring the Holy Grail to England, and assumedly perpetuate his line, after the crucifixion). Hence the lines:

"And did those feet in ancient time Walk upon England's mountains green? And was the holy Lamb of God On England's pleasant pastures seen?"

"And did the countenance divine, Shine forth upon our clouded hills? And was Jerusalem builded here Among these dark satanic mills?"

Actually, despite any impression that he was a buttoned-up and joyless Christian, Blake was in some ways so exceptionally unorthodox in his personal life that he would have been causing a stir even if he'd lived today. No prude, he believed in free love a long time before the summer of 1967. Indeed he told a barrister in his latter years that, according to the Bible, he was entitled to access to 'a community of women' and that concubines were part of God's plan. And, a bit of a naturist long before it caught on in suburbia, he got into trouble for sunbathing naked in his garden with his beloved wife (supposedly re-enacting the tale of Adam and Eve). 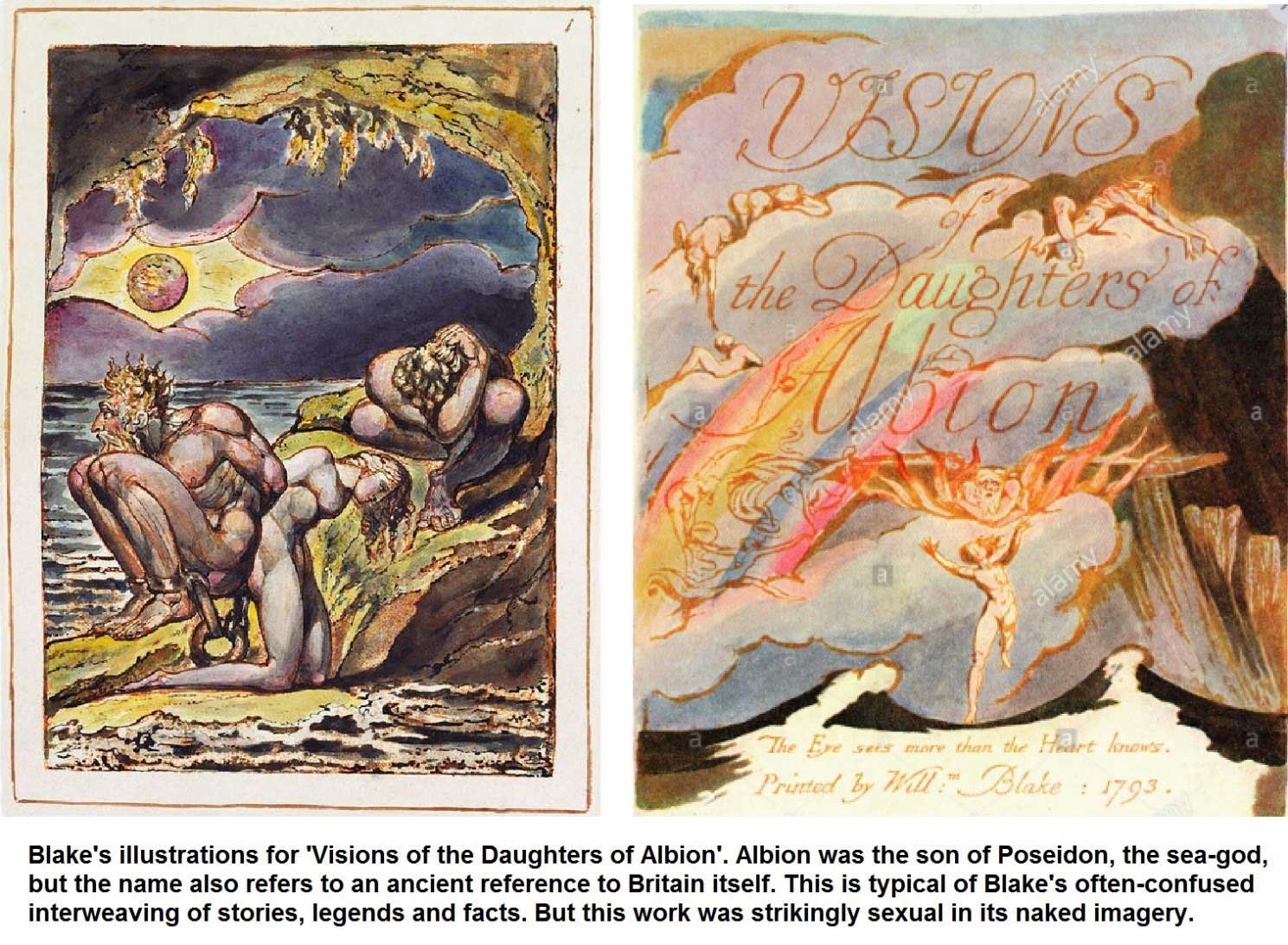 So he was a superb fine artist. Having trained as an engraver for seven years he also became a fine printer (his raised etchings on copper plates enabled printing with very little pressure, but he learned to write backwards to do this). And he was a fine writer. Poems such as 'Tyger Tyger' and 'Auguries of Innocence' are as good as anything produced by those other luminaries within the pantheon of English-speaking poets.

Blake was brilliant. He was ahead of his time. He had a raft of skills that, in isolation, would all have been enough to make him famous. And it was a crying shame, given his genius, that he should die in abject poverty. But the world has belatedly woken up to his greatness so you can easily purchase examples of his work. Try www.allposters.co.uk, www.art.co.uk, www.williamblakeprints.co.uk and www.fitzwilliamprints.com/collection/3541/william-blake - but there are many other sources of prints that would grace any home, office or workplace.

You'll need them framing. EasyFrame is an obvious and affordable supplier, whether you want to source all you'd need to do the job yourself or have them do it for you. When the work is by an artist as pre-eminent as William Blake you might well feel that you'd like to use something decorative, grandiose and ornate like a swept frame, not least since that would let the work stand out. But any good framers will be able to show you a vast range of different solutions and advise on what might be the most suitable given the work and its proposed location.