What is Oil Paint? At EasyFrame, we love art of all kinds – even the stuff that doesn’t fit in a picture frame. From minimalist conceptual exhibits to abstract sculpture to traditional watercolours, we’re passionate about any artwork that can really make us feel and th

Login
Help
Contact How To Videos Measuring Advice Delivery/Dispatch Discounts Refund/Damage What's Included Who We Are Blog Bedford Showroom
CORONAVIRUS UPDATE - We are fully operational and not experiencing any delays.
Free Delivery Over £50 * Most UK Addresses  |  Order Today for Dispatch On or Before Friday 29 May

What is Oil Paint?

At EasyFrame, we love art of all kinds – even the stuff that doesn’t fit in a picture frame. From minimalist conceptual exhibits to abstract sculpture to traditional watercolours, we’re passionate about any artwork that can really make us feel and think. We’re also pretty jealous of anyone who can simply pick up a pencil or a paintbrush, and create a masterpiece that will look amazing hanging in any old picture frame. 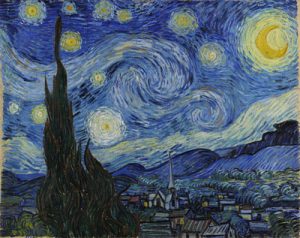 Of course, becoming an artist is a lot more complicated than being born with natural talent. Just take a look at the complexity that goes into producing an artwork with oil paints.

The medium of oil painting has been used by artists around the world for centuries. Nearly all of the world’s most famous paintings were produced in oil – that includes "Mona Lisa", "Starry Night", "Girl with a Pearl Earring" and Mark Rothko’s "No. 10". It’s a term that can be applied to any slow-drying paint created from a mixture of pigment and oil. It’s popular with professional painters because it is long lasting and slow-drying, allowing for corrections to be made gradually. It can also be used to produce unique aesthetic effects that aren’t possible with other types of paint.

The Origins of Oil Paint 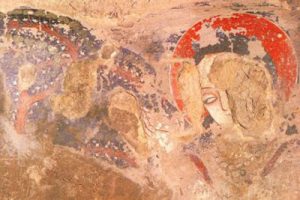 In 2008, a number of paintings were unearthed in a cave in Afghanistan dating back to 650 AD. They were found to have been created with oil paint – in this case using a combination of pigments, and walnut and poppy seed oils.

This is thought to be the first use of oil painting and would seem to indicate an early appreciation for the artistic potential of oil.

However, it wasn’t actually until the Renaissance that oils began to be widely used as an artistic medium. During the classical and medieval periods, oils were used during the painting process for drying, varnishing and sealing. They were also occasionally used to add detail to tempera paintings (tempera is a technique where pigments are mixed with a water-soluble medium, often egg yolk). Usually, however, oils were seen as disadvantageous because of their long drying times and weren’t a staple of the artist’s paint box. In the 15th century, that all began to change. 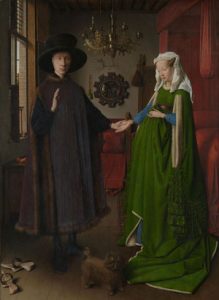 Up until the 15th century, tempera was the preferred style of painting. But with the movement towards naturalism – spurred on by early Renaissance painters in the Netherlands – came a reassessment of tempera; though quick-drying and long lasting, realistic detail and nuance simply could not be achieved with this medium.

It’s often said that Dutch painter Jan Van Eyck was the inventor of modern oil painting. Closer to the truth is the idea that he was an early, and very influential, adopter. His 1434 painting "The Anolfini Wedding" marked a particularly important turning-point for Western art. By painting wet-on-wet (i.e. blending colours directly on the canvas) and building up delicate layers of colour and depth, he illustrated the power and intensity of oil paint to the rest of the art world.

What isn’t known is precisely what oil mixture Van Eyck used. However, we do know that the painter Antonello da Messina later developed a mixture containing lead oxide called "oglio cotto" or "cooked oil" that dried better. Later, Leonardo da Vinci threw his expertise into the mix and began using beeswax in his paint. We now know that oil paintings containing cooked oils or lead oxide darken quickly – for that reason, other techniques are utilised today.

The Introduction of Paint Tubes

Up until the middle of the 19th century, artists blended their paints themselves, grinding pigments and painstakingly blending them with the appropriate oil mixtures. A change came in 1841 when portrait painter John Goffe Rand invented tin tubes for storing oil paints.

This was revolutionary for a number of reasons. Firstly, it prevented paints from drying out, and secondly it enabled artists to paint outdoors with greater ease. Referring to this development, Pierre-Auguste Renoir famously stated: "Without tubes of paint there would have been no Impressionism".

The appeal of oil paint has not dimmed since the Renaissance – even following the creation of fast-drying acrylic. Today, however, it’s a lot easier for artists to achieve their desired effects, due to a greater availability of materials.

Commonly, professional painters will incorporate other materials into their paint blends, to decrease drying time, increase thickness, or create a particular finish.

Wax can be added as a stabiliser, and in larger amounts can be used to create an impasto effect; this is a technique where paint is built up in thick, 3D layers leaving visible brush strokes. It’s often applied with a painting knife or a large brush.

Synthetic resins can be added to oil paint to create gloss and decrease drying times. Historically, tree resins such as amber were dissolved in turpentine and added to oil paint, but – despite creating the desired visual effects – these types of natural resin often ended up causing cracking and yellowing. With modern synthetic resins this isn’t a problem.

Solvents such as white spirit and turpentine are another material used by oil painters. When combined with oil paint they decrease drying time, and are often used for filling in backgrounds, which can then be painted over with oils quickly.

Bringing Oil Paintings into your Home

If our guide to oil paints has inspired you to try your hand at painting, don’t forget that EasyFrame can help when it comes to your picture framing needs. We offer a wide assortment of picture frame and picture mount styles, all of which can be custom-made to fit the exact dimensions of your masterpiece.

Find out more about our custom picture framing products by visiting our Picture Frames & Mounts or Canvas Frames pages.