Watch out for Wachtmeister! This article is about the contemporary Austrian artist Rosina Wachtmeister, now aged 80 and reportedly still going strong. She has become well-known in Central Europe, though her art is sold in the UK and is freely available through her official site

Watch out for Wachtmeister!

This article is about the contemporary Austrian artist Rosina Wachtmeister, now aged 80 and reportedly still going strong. She has become well-known in Central Europe, though her art is sold in the UK and is freely available through her official site at www.rwlicensing.com, for her bold impressionistic poster-work which often depicts cats (she also creates cat sculptures, but please don't let this fascination with the fickle furry malfeasants put you off!)

She creates portraits too. And, perhaps most remarkably, a couple of decades ago she published a book in her native German and called 'Das Lied von der Liebe' (strictly speaking this translates as 'Song of Love') which illustrated the Biblical 'Song of Songs' (yes this is from the Old Testament, and is also known as 'The Song of Solomon' and 'The Canticles', but it is not particularly religious and very much about sexual love in that it expresses the lusts of a man and woman for each other; any suggestions to the contrary, i.e. that it's about God's love for man, are a little naive).

One of the most intriguing aspects of Wachtmeister's work is that, if one only looked at her prints, one might wrongly conclude (because of her frequent use of flat colour) that she is constricted by a peculiarly two-dimensional take on reality. Yet the artist's aptitude as a ceramicist demonstrates an unexpected ability to model well in three dimensions. Her work is different. Wachtmeister achieves much with flat colour and through the utilisation of mirrored surfaces requiring complex reproduction by printers and finishers for the mass-market. Realism it isn't. But she's got something. And it's commercial.

Rosina Wachtmeister was born in Vienna in 1939, the first of two daughters to a doctor whose wife was an architect and ceramicist. They upped sticks in 1953 and went to Brazil, where Rosina attended a German school. She was later to study fine art, sculpture and stage design. She admits to being inspired by the Austrian Friedensreich Hundertwasser, the French-American Niki de Saint Phalle, the Swiss Jean Tinguely, the Hungarian Imre Makovecz, the French Tomi Ungerer and the Italian Afro Basaldella. So she's very international in outlook and settled in Italy, where she continues to work, long ago.

Wachtmeister may never be recognised as a great artist. Yet she's been prolific and much of her work has undoubted artistic merit. It's affordable. And varied. Moreover she has never rested on her laurels and continues to try to stretch herself, taking some pride in declaring “My style changes every time I sit down and paint”. That's beautifully demonstrated by the three images below, which at first sight one would not expect to have been executed by the same artist. So she's a versatile lady.

But there's a lot more. Whilst her work is accessible to the masses it is almost ubiquitous and yet tightly controlled, in respect of licenses, by her family. They're clearly savvy. There must be very few contemporary artists who have achieved such commercial success in both two and three-dimensional media. Whilst researching this article I've seen her art adorn jewellery-boxes and jigsaw-puzzles, duvets and dishes, teacups and trays, rugs and barometers. Yet that's just the beginning. Rosina Wachtmeister has probably more commercial deals than George Lucas ever had for 'Star Wars' paraphernalia. And nothing that bears her name is plastic junk.

In the introduction I mentioned Wachtmeister's work on the Old Testament's 'Song of Songs'. (This is a bit of an anomaly but, if one delves into the New Testament, one can also find - in the letters which follow testaments by Matthew, Mark, Luke and John - inclusions that simply do not fit with the rest of the content.) It should be understood that this ancient text, which runs to eight short 'chapters' with very few words, is the Judo-Christian equivalent of 'Rubáiyát of Omar Khayyám', the latter being a sensual treatise attributed to a Persian astronomer-poet of the 11th and 12th centuries. Like 'Rubáiyát of Omar Khayyám', 'Song of Songs' celebrates love and life, rather than setting out how and why its readers should worship (or, indeed, practise celibacy). 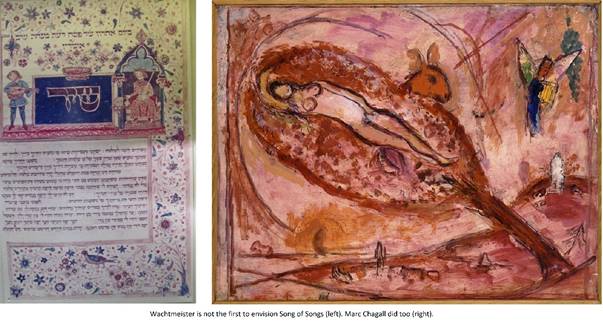 Here's an excerpt from 'Song of Songs' which proves my point:

'How beautiful are your feet in their sandals, O prince's daughter! The curve of your thighs is like the curve of a necklace, work of a master hand.

Your navel is a bowl well rounded with no lack of wine, your belly a heap of wheat surrounded with lilies.

Your two breasts are two fawns, twins of a gazelle.

Your neck is an ivory tower. Your eyes, the pools of Heshbon, by the gate of Bath-Rabbim. Your nose, the Tower of Lebanon, sentinel facing Damascus'.

In my opinion Wachtmeister demonstrates in this work alone that she is hugely underrated. Her illustrations make Marc Chagall's efforts look hopelessly amateur. (It is worth remembering that one work - 'Bestiaire et Musique' - by Marc Chagall, the Belarus-born cubist-expressionist, recently set a new record of over m as the most expensive painting by a Modern Western artist ever sold at auction in Asia.)

So this must have been, for Wachtmeister, a fascinating diversion. I've found no other indication of any religious affiliation and the lady appears to enjoy her privacy.

Wachtmeister likes to throw into juxtaposition several icons of domesticity. Cats and musical instruments are recurrent themes. In the same way the artist uses recurrent fillers such as sheet-music. And she favours blues and creams but there must be very few colours which she hasn't utilised. Arguably her work is simplistic but, perhaps, that doesn't do it justice. In any event the outcomes are popular and deservedly find a ready audience. So critical snobbery, what I guess she'd refer to as people being unnecessarily 'hochnäsig' (or 'high-nosed') is perhaps inappropriate.

I shouldn't end there. Although the focus on this website is always going to be on two-dimensional art, it would be an unforgiveable oversight to ignore Wachtmeister's three-dimensional work as a ceramicist. Self-evidently the artist herself will be responsible for every aspect of some of these creations though one suspects that she, like Damian Hirst, has a team who execute the finishing if they don't project-manage entire ideas.

Rosina Wachtmeister's work will endure in its popularity. And even a print is likely to retain its value.

To find out how to obtain her work go to www.rwlicensing.com where there is a shop. It is possible to purchase prints, originals, and much more.

If you buy Rosina's prints you'll need them framing. Unless you know your stuff when it comes to picture frames and mounts it's always worth going to experts. EasyFrame is an obvious and affordable supplier, whether you want to source all you'd need to do the job yourself or have them do it for you.