Wake Up with Warhol Warhol loved to exude an aura of mystery and reinvent himself. In this sense he doubtless inspired David Bowie to create seemingly-endless persona. Bowie apparently only met Warhol once but was a big fan, and both men worked with the 'Velvet Undergro

Wake Up with Warhol

This article is about the American pop-artist Andy Warhol (1928–87), who was not only an artist but a writer, director and producer whose works spans a variety of media and who is rightly famous for some of his creations, his fostering of a Bohemian lifestyle in New York, and his declaration that ultimately everybody will enjoy 15 minutes of fame. It is worth mentioning, even at this early stage in my article, that Warhol's work was described in 2009 by 'The Economist' as being 'the bellweather of the art market' – implying that prices paid for his work are indicative as to whether art-buyers are currently more bullish or bearish in respect of acquisitions.

It's worth mentioning, too, that The Tate is having an Andy Warhol show from 12th March to 6th September 2020. 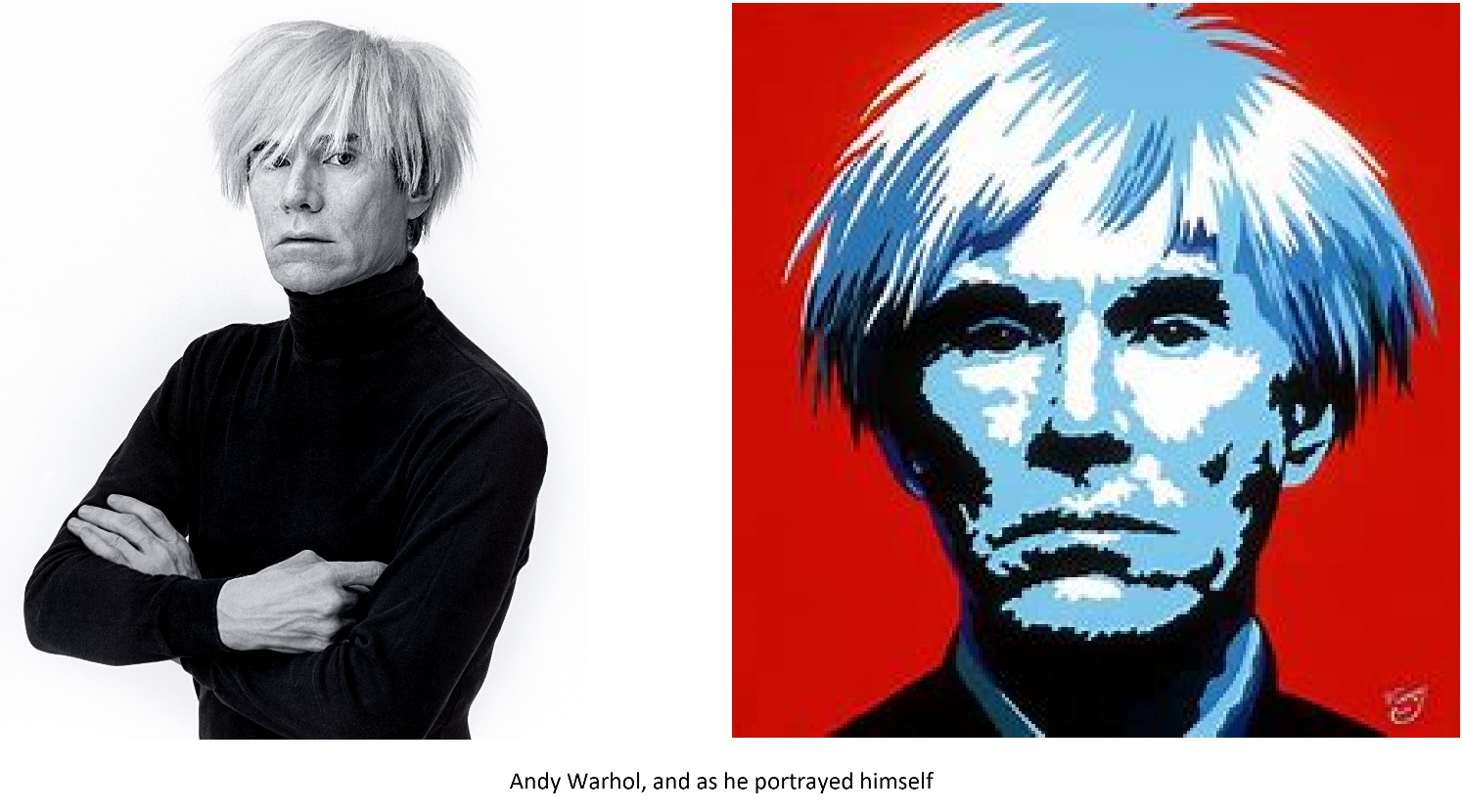 Andy's Early Days, His Ill-Health, His Religion, His Sexuality and His Politics

Andy Warhol was actually born Andrew Warhola in 1928, as the third of three sons, within an ethic enclave of Pittsburg Pennyslavania to parents who were Slovakian immigrants and who'd arrived earlier that decade. Of course the Great Depression was to start in 1929 and run until 1933, so it follows that - with a father who was a construction-worker in an era when not much was going to be built and a mother who was an embroiderer - life for the family was tough. And it became tougher when Warhol developed Chorea, a neurological condition that results in movement disorders including twitching and involuntary spasms, difficulties in gripping and sometimes making sufferers stick out their tongue, as well as problems speaking and swallowing. This left him bed-bound for some time as a child though he did apparently recover in due course (indicating it was more likely to be Syndenham's Chorea and not the more serious Huntingdon's Chorea).

The family were devoutly religious, with his mum Julia being particularly pious, practising Byzantine-Slavic Catholicism. And, though Warhol was not only a self-confessed homosexual (as a consequence of which, perhaps, he never had children) but one who openly patronised a Bohemian culture where pretty-well anything went, he remained deeply religious throughout his life. Apparently he didn't advertise this, but the pastor of his church has told how Warhol visited it every day, lit a candle and prayed for a quarter of an hour – and that in the meantime the artist kept an altar, crucifix and well-used prayer-book on his bedside table.

Interestingly Warhol remained aloof from politics, or perhaps ambivalent or agnostic, once saying that he felt he should be Republican since he hated paying taxes but that “artists just can't be Republican, can they?” Perhaps he felt torn between supporting the Democrats (who would have been more likely to empathise with those coming from a Slovakian ghetto) and Republicans (who not only have low-tax regimes but were more likely to buy his art). After all, his most expensive work to date (his 1963 work 'Silver Car Crash (Double Disaster)' fetched US5m.

Health was a problem. Later Warhol's chronic issues with his gall bladder led to an operation in 1987 that triggered complications then a cardiac arrest at the age of just 58. But, actually, he might easily have died a decade earlier when he was shot in the chest by a schizophrenic radical feminist (what a combination!) He was promptly missed. Thousands of people attended a memorial for the artist at New York's St. Patrick's Cathedral.

It was Warhol's mum who had got him drawing when he was laid up in bed as a kid, so the Chorea was perhaps a blessing in disguise, and when he recovered he just kept going. When he was 24, in 1942, Warhol attended Schenley High School. From 1945 to 1949 he studied at Carnegie Institute of Technology (since then renamed as Carnegie Mellon University) where he earned a Bachelor of Fine Arts in Pictorial Design.

When Warhol became an illustrator for 'Glamour' magazine it thrust him into the forefront of the Pop Art movement which captured the world's attention by experimenting with new media, photography, silk-screen printing, household brands such as Coca-Cola and Campbell's (the soup-makers) and celebrities including Marilyn Monroe, Mao Tse-tung, Elizabeth Taylor and Mick Jagger. In one sense he was responsible for helping the public to see 'low art' as 'high art', irrevocably coupling 'fine art' with materialism and consumerism – implying that it could be cheap and throwaway too.

It should be explained that Pop Art per se ran from the late 1950s (the phrase was coined in 1958 by the British art critic Lawrence Alloway) until the 1970s. (Though, if we are being pedantic, its precedents were in 'Imagerie d'Épinal' [1855] by Gustave Courbet and 'Au Bon Marché' [1913] by Pablo Picasso, as well as in the Dada and Neo-Dada movements.) Its roots were in Britain and it usually utilised recognisable flat images of celebrities and characters sourced from comic-books and other popular media as well as consumer products. These works were often rendered in bright colours and in two dimensions but occasionally three. And, of course, Warhol worked in film too – so in that sense Pop Art became four-dimensional.

Warhol waded into this world proper in 1961 when he exhibited his work. Then, in 1964, he opened his own studio, 'The Factory', where he worked and rubbed shoulders with the rich and famous. The Pop Art continued to be influential for another decade but fizzled out in the early 1970s and was the last gasp of what was retrospectively termed 'Modernism' - making way for 'Post-Modernism'.

Warhol loved to exude an aura of mystery and reinvent himself. In this sense he doubtless inspired David Bowie to create seemingly-endless persona. Bowie apparently only met Warhol once but was a big fan, and both men worked with the 'Velvet Underground' frontman Lou Reed. There were other links. Bowie played the role of Warhol in the 1996 film 'Basquiat' directed by Julian Schnabel). And, of course, Bowie famously wrote 'Andy Warhol' (for his 1971 album 'Hunky Dory') which he even performed at 'The Factory' in Warhol's absence - though apparently Warhol was offended by the lyric 'Andy Warhol looks a scream' (interesting given that Andy's big brother once mistook a photo of Bowie for being his own brother!)

In summary Andy Warhol was a one-off and that explains why his work continues to attract attention. Indeed Pittsburgh hosts the largest museum in the USA dedicated to just one artist, and its collection boasts over 900 paintings, about 4,000 photographs almost 80 sculptures.

Yet there's no reason why you can't have something on a more modest scale in your home or office. Unframed prints of Warhol's work (or indeed prints featuring his adages) are widely available for a few quid at sites such as the Tate's at https://shop.tate.org.uk/andy-warhol-exhibition (expect more to be available during 2020). 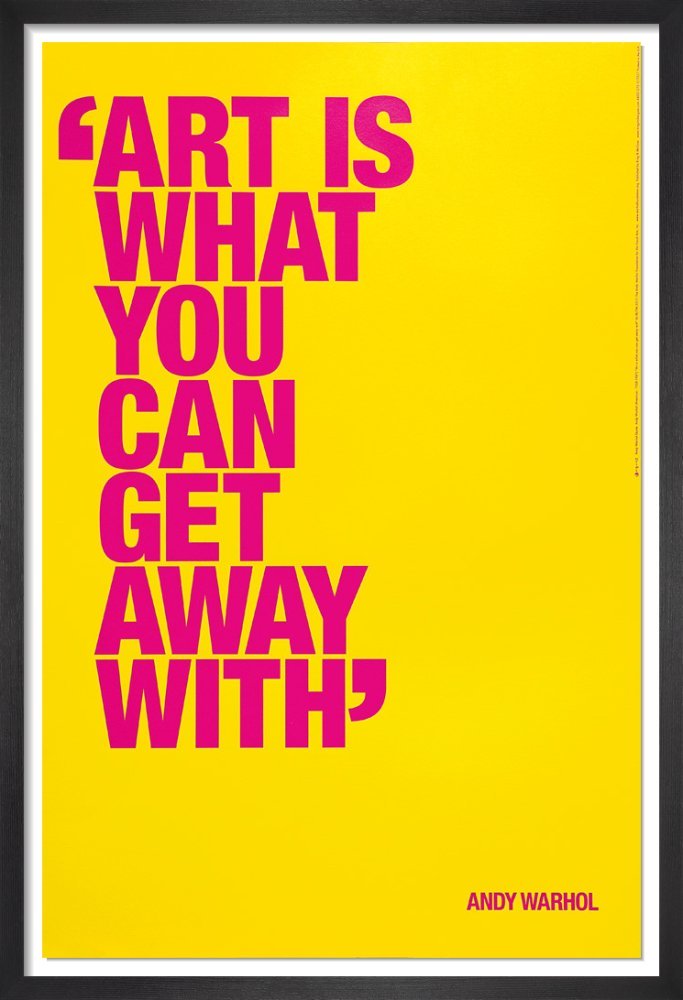