Ustad Mansur’s ‘Zebra’ (1621) The work ‘Zebra’ was painted in opaque watercolour and gold on paper in 1621 during the Mogul Empire. It is a miniature, being just 18.3cm x 24cm, and may well have been the last miniature that the artist executed. It is attributed to Ustad Mansur, w

The work ‘Zebra’ was painted in opaque watercolour and gold on paper in 1621 during the Mogul Empire. It is a miniature, being just 18.3cm x 24cm, and may well have been the last miniature that the artist executed. It is attributed to Ustad Mansur, with ‘Ustad’ being a complimentary title meaning ‘Master’ and acknowledging his status. But it didn’t stop there because such was the artist’s eminence that Mansur was accorded, during his lifetime, the title ‘Nadir al-‘Asr’ or ‘Wonder of the Age’. Today that would be the equivalent of calling him ‘a national treasure’.

The Islamic Mogul emperors controlled huge areas of South Asia and consequently were extremely rich (ultimately too rich for their own good because it was their downfall) and effectively could afford to sponsor their own ‘Renaissance’ at this time (the European Renaissance was a little earlier, during the 15th and 16th centuries). Mansur was notably a contemporary of Bichitr. But there were other great artists of the period working for the emperor, notably Abu'l Hasan, Basawan, Farrukh Beg, Ikhlas, Inayat, Manohar, Miskina, Muhammad Nadir, Murad, Nanha Govardhan and Pidarath. So, in a sense, this court was the Asian equivalent of Florence, Venice or Rome.

In this context Mansur, who worked in the court library though he was often taken into the wilds by successive emperors to paint whatever was found there, and who became famous for his studies of animals (especially birds) and flowers though he also painted portraits, was asked to depict the gift of a zebra which had originally been captured in Ethiopia. The animal was new to the Moguls and was initially suspected to be a folly, a painted horse.

This article explains what is known about the artist, his work, his patrons and his times. 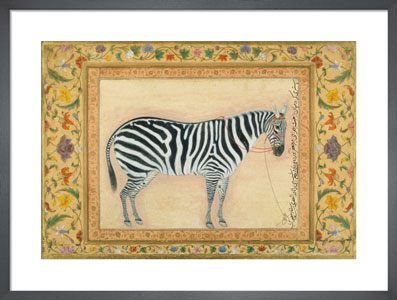 Mansur’s Career as a Naturalist - and the Dodo

We don’t know when Mansur was born or died but we do know that the suffix (the bit added to the end of his name) on some early work by him was ‘Naqqash’. This indicates that he may well have come from a professional and/or prominent family of artists or carvers.

We also know that he lived, painted and had an illustrious career (with him being prominent between 1590 and 1624 when he was based in the court library) during the reigns of two Mogul emperors, namely:

Mansur’s work during Akbar’s reign is pretty-well documented in memoirs known collectively as the ‘Akbarnama’ and which are kept, along with ‘Zebra’ and other paintings by Mansur, in London’s ‘V&A’ (Victoria and Albert) Museum. ‘Zebra’ was probably painted to go into these memoirs, but if it was there are no corresponding pages. So that’s not certain.

His rise to prominence was not immediate. Initially Mansur seems to have been left to simply colour plates. His name was not initially listed with those of other artists, and this was a time when the artist’s name was usually put in the margin. But by the time Jahangir was crowned emperor Mansur was trusted to collaborate with fellow-artist Manohar on the portrait to celebrate the event.

But the artist’s work under Jahangir is well-documented too, in parallel memoirs known as the ‘Jahangirnama’, and in there ‘Zebra’ is mentioned along with the circumstances of its creation.

We know that Mansur and other artists accompanied Jahangir (and possibly his father Akbar too) during frequent travels across the empire. It is not clear where all of the destinations were but Mansur was responsible for painting the blue-throated Barbet that was probably only ever native to the Himalayan foothills (including Kashmir, which is the border between modern-day India and Pakistan). In the memoirs we can read in Persian (the court language) that the emperor Jahangir, who was clearly reliant on Mansur, would say things like: ‘I ordered Nadirul-asr Ustad Mansur to draw its likeness’.

Mansur was the first artist known to have painted the Siberian crane so the patronage of the emperors allowed him to be a dedicated naturalist. Importantly we know that Mansur also painted a live dodo, the only person to do so. And that’s important because the dodo, a huge flightless bird, was extinct by 1690 (Dutch sailors had realised it was easy-to-catch and that it tasted too delicious for its own good).

The artist might have become a great naturalist. But we know that some of his early work depicts creatures that were the products of fantasies. We can separate out his career, and what he painted when, to an extent because early on he used oil on canvas but then shifted to gouache on paper.

Frustratingly it is not always possible to be certain that all of the work attributed to Mansur is indeed by him. Certainly there were certainly those who ruthlessly forged works that were passed off as Mansur’s, often to sell in Europe where the deception might be harder to spot, works which sometimes bore his name. The chameleon below is an example of work where the provenance isn’t absolutely certain. But Mansur seems to have been capable of unmatched attention to detail so work of that quality, with that subject-matter from that court and in that era. Is more than likely to be his. 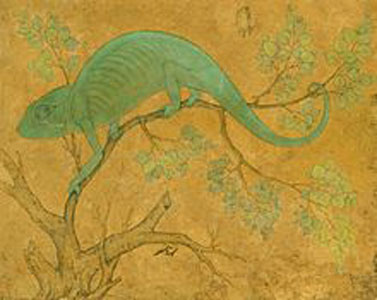 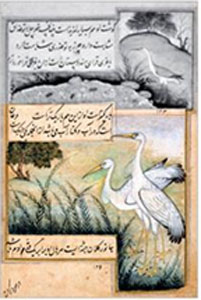 Mansur’s Title. And Why You Cannot Believe All You Read (Except Here)

It has been written that it was Jahangir who gave Mansur the title ‘Nadir al-‘Asr’ or ‘Wonder of the Age’. That is incorrect. Mansur was definitely using the title during Jahangir’s father’s reign. So Akbar-i-Azam, as emperor, probably gave him it. Though that’s not certain.

Only Mansur and one other artist, Abu'l Hasan, are recorded as having been honoured in this way. 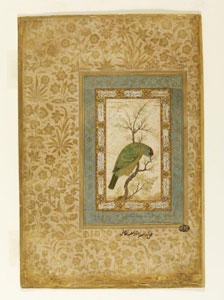 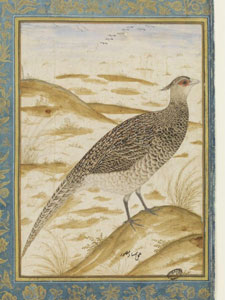 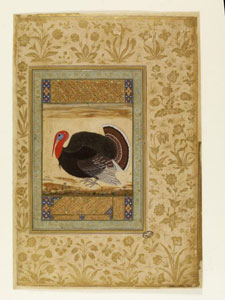 Animals such as a Barbary falcon and a dodo (which came from Goa, then controlled by the Portuguese) were often brought as gifts to the Mogul court. This was 400 years or so ago, and since then quite a few of those animals, which must have been rare at the time which is why they were gifts, have become extinct.

The same can probably be said of flowers. Mansur was clearly fascinated by botany and is known to have painted at least a hundred flowers from the Kashmir valley alone. And they weren’t just the centrepieces. He frequently created floral borders containing these flowers and insects, something that was rather a convention during the Mogul period.

The zebra in this painting is Burchell's Zebra, known to biologists as ‘Equus quagga burchelli’. And it is worth knowing that this particular zebra, with a yellowish-brown coat and darker stripes, became extinct in 1883.

It had been presented to the emperor Jahangir during the ‘Nowruz’ (or New Year) festivities in March 1621 by a Mir Ja'far (not to be confused with the British East India Company general of the same name who came later), who had acquired it from Turks who’d brought it from Ethiopia.

Jahangir wrote on the painting that the zebra was: 'A mule which the Turks in the company of Mir Ja'far had brought from Ethiopia. Its likeness was drawn by Nadir'ul-'asri Master Mansur'. He added the year (as you may realise, the calendar was entirely different then and not the one we have now). But the artwork was, for some reason, not added to the memoirs though as a miniature that was what had pretty-certainly been intended.

But after he’d carefully examined it, and realised it wasn’t a fraud, Jahangir sent the zebra itself to the Shah of Iran who was a pal with whom he often swapped such curiosities.

When Jahangir's son Shah Jahan became emperor (he reigned from 1628 to 1658) ‘Zebra’ was finally added to a royal album. The illuminated calligraphy and ornate borders of the painting and its reverse were added then too. 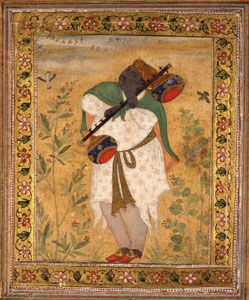 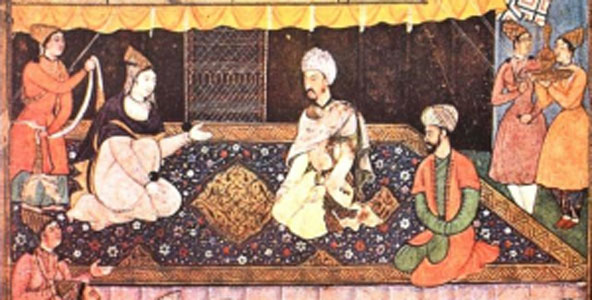 Above: Left is Mansur’s ‘Portrait of the Musician Naubat Khan Kalawant, who played a ‘rudra veena’ (aka a ‘bin’), a four-stringed instrument. Right is ‘Barbur Meeting his Sister’ (Barbur - or Zahir-ud-din Muhammad Barbur - was the founder of the Mogul Empire in 1526, so this was an historic re-enactment).

In summary Mansur’s work was deemed to be so good that other artists forged it for a couple of centuries. There is even a crater on the planet Mercury named after Mansur!

It is possible to affordably buy unframed prints of work by the artist. See www.wikiart.org/en/ustad-mansur as an example. 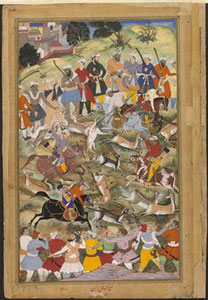 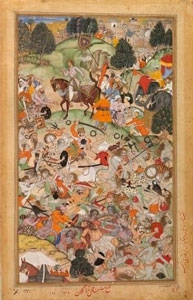