Street Art UK: It’s Not All About Banksy For most people, the term “street art” brings to mind one name: Banksy. A household name around the country for over a decade, this notoriously camera-shy artist is famous for his darkly humorous, politically-charged urban graffiti, and large scale s

Street Art UK: It’s Not All About Banksy

For most people, the term “street art” brings to mind one name: Banksy. A household name around the country for over a decade, this notoriously camera-shy artist is famous for his darkly humorous, politically-charged urban graffiti, and large scale satirical art projects such as last year’s Dismaland.

Banksy, whose identity is still under debate, began practising graffiti art in the 1990s, but his distinctive black and white stencil-style pieces began to achieve widespread public recognition in the 2000s. Some of his most famous works include the Flower Thrower, which appeared on a wall in Jerusalem in 2003, Girl with Balloon, and Kissing Coppers. In 2010, Banksy also got people talking with his documentary Exit Through the Gift Shop, which tells the fascinating story of his friendship and working relationship with newcomer street artist Thierry Guetta (aka Mr Brainwash). Upon the film’s release, critics and audience members puzzled over whether or not the film was a hoax staged by Banksy.

Though Banksy is the best known and most widely discussed street artist around the world (which is in part due to his ongoing anonymity), he’s not the only one on the scene. In fact, in the UK alone there are plenty of artists creating work worthy of discussion. Here are just a few to look into.

One street artist who is creating artwork in a similar style to Banksy is Stewy. Based in East London, Stewy uses stencils and black paint to create his work and is particularly well-known for producing life-size figures of British icons and animals. Stewy famously began his street art career by spray-painting pigeon stencils onto the walls at the Cannes Film Festival, and after this he decided to embark upon a larger wildlife project. Today, urban wildlife is still one of Stewy’s popular themes, part of a project which he describes as nature “reclaiming the city”.

Some of the most innovative street art in the UK is currently being produced by Replete, who is originally from Whitby. Replete specialises in several different types of painting, but his most intriguing work is done using cling film. His technique involves stretching the film across open spaces and painting onto the surface created; the resulting image has the appearance of hovering in the air and, when seen from certain angles, appears three-dimensional. He is also notable for creating some amazing trick-of-the-eye murals which cross several surfaces, giving the appearance of depth, shade and perspective.

Though he doesn’t work under the most pleasant of names, Sheffield-based street artist Phlegm creates some truly stunning work. He is most celebrated for his large black and white murals, which have the look and feel of something out of a dark fairy tale book. Phlegm mostly paints in rundown or disused spaces, and his figures are distinctive for their distorted inhuman shapes – in fact, the long thin arms and legs and small domed heads are reminiscent of the aesthetic used by Tim Burton in much of his animation. Other popular motifs in his work include detailed cityscapes, steampunk-style machines and giant, wide-eyed creatures (some real, some fantastical).

When it comes to big, colourful, comic book-style street art, no one is doing more exciting work than Snub 23. Based in Brighton and working with stencils and free hand painting, Snub is memorable for the distinctive style of his work, and for using one or two images over and over again in differing poses and colour schemes. Snub’s favourite image to paint seems to be a colossal mechanical robot with a zigzagging mouth of metal teeth, which – according to the artist himself – was inspired by the comic book robot character Hammerstein. Less common amongst Snub’s images – but just as striking – are his female figures with long flowing hair. In 2013, Snub contributed to an art project which involved painting the sides of the abandoned Duke of Lancaster cruise liner (and yes, his famous robot creation made an appearance). 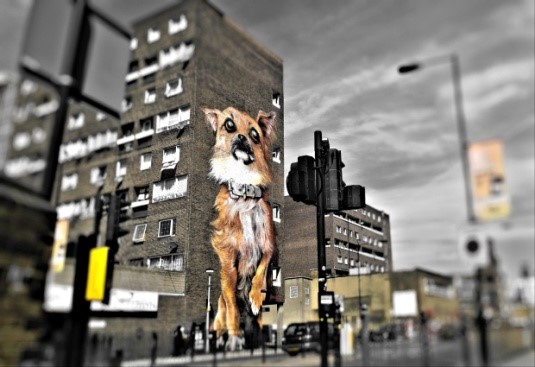 If you’re a fan of UK urban wildlife then you’ll want to check out the street art of mysterious graffiti duo “Whoam Irony” and “Placee Boe”. The two are famous for producing huge paintings on the sides of buildings that depict creatures typically thought of as pests or vermin, such as foxes, pigeons, rats and squirrels. However, one of their largest and best-loved is the gigantic, pink-collared Chihuahua that appeared on a brick wall in East London in 2014. Irony and Boe work at night to retain their anonymity, and produce all their work using spray paint.

Another UK street artist who is known for painting wildlife is ATM. ATM grew up in rural Northern England but is now based in London, and his artwork has a particular message; highlighting the plight of Britain’s endangered bird species. He has spoken publicly about his inspiration coming from a childhood love of birds, as well as the works of certain 19th-century illustrators. In 2014, ATM began producing street art in East London, choosing
rundown council estate walls and railway arches as the backdrops for his works. ATM’s distinctive style involves painting a detailed portrait of an endangered bird against a block colour background. Particular subjects have included the barn owl, the goldfinch and the heron.

Around the UK, street art is thriving. Wherever you look, new graffiti, stencil work and murals are springing up – and many of these pieces are being created by artists with real talent. So, remember that you don’t have to visit a museum to see a masterpiece!

Don’t forget too that that if you’re looking to add an artistic edge to your home, EzeFrame can lend a helping hand. We provide a range of custom-made picture frames and picture mounts, with a variety of colours, textures and finishes available. Of course, if you’re feeling inspired by the artists listed above, you could flex your own graffiti muscles and get out the spray paint…