The work ‘Night Attack on the Sanjō Palace’ is a massive 45.9 x 774.5 cm (16 inches x 22 feet) Japanese handscroll (or ‘emaki’) created with ink and colour on paper. It’s an action-packed and arguably-pornographic narration of a complex series of events that is designed to be viewed from right to left. But ordinarily one would look at just one section of a handscroll at a time, not all of it. The artist is unknown.

This article describes the piece, the events it depicts, and the context one needs to know about in order to appreciate its uniqueness.

Emaki can be very long so they were often used for landscapes and, actually, the fact that they’re ink-on-paper means that they were never susceptible to the sort of deterioration like paint-cracking that one sees in European oil paintings of the same era.

Text explains the artwork. It needs to be explained at the outset that the Japanese traditionally have two ways of writing. When they write from top to bottom it’s called ‘tategaki’. But when it’s from left to right (as is English) it’s called ‘yokogaki’. Yet in ‘tategaki’ the columns work from right to left and not left to right. So this work follows the ‘tategaki’ convention in that the graphic sequence works - with the text - from right to left in vertical top-to-bottom columns.

It is also vital to understand that the whole scroll is not one simultaneous event but a series of them with some characters appearing several times, blended together as if it were one scene, and a bid’s-eye view working from right to left. In this sense it’s almost like a modern strip-cartoon but the lack of hard boundaries or frames in ‘Night Attack on the Sanjō Palace’ poses problems of comprehension in respect of cause-and-effect (or causality) unless one remembers that Einstein declared (in a letter to his sister-in-law) ‘People like us who believe in physics know that the distinction between past, present, and future is only a stubbornly persistent illusion’.

We know that the work dates from the 2nd half of the 13th century during the Kamakura period or ‘jidai’ (1185 -1333) when the 1st shōgun, Minamoto no Yoritomo, set up in the city of Kamakura. We know what it depicts. This was a period when the samurai were effectively replacing the aristocracy as rulers. During 1159 – 1160 there was a short-but-brutal war, the Heiji Insurrection. The most momentous event of it was an appalling incident at Sanjō Palace in Kyoto, Japan. This handscroll depicts that event. There was, we know, a 2nd handscroll that depicted the rest of the Heiji Insurrection and the conclusion of the saga. But it’s been lost and mayl no longer exist.

‘Night Attack on the Sanjō Palace’ might well have been created as a commission for one of the new Samuria caste, to share with an audience of male friends (it was termed an ‘otoke-e’, a ‘man’s painting’, or a ‘gunki monogatari’, a ‘war tale’) who would enjoy the depiction of belligerence, bravery, bloody brutality and breasts (there is a lot of nudity and undoubtedly the sex and violence were titillating). It has been noted that the aristocracy is not depicted, and of course the victors always depict the outcomes of conflicts in terms favourable to them, so there is a strong argument that a well-to-do scholar (assumedly somebody who could afford to have a living-room with an 8-metre-long wall) had the scroll created.

Today it is held by the Boston Museum of Fine Arts but its ownership is contended because it seems like it was spirited out of Japan (seemingly in 1886) and bribery might have been involved in the facilitation of its export. Yes it is unattributed because we don’t know who the artist was. For a time there was a theory that it was a Japanese artist called Keion or Kenin who was one of the Kasuga / Fujiwara family of painters (the line has a famous ancestral shrine). But, to date, nothing has been proved and the artist may never be identified.

Above: The opening text from ‘Night Attack on the Sanjō Palace’.

The Complex Events Depicted in a Nutshell

The elderly and intelligent former (77th) emperor Go-Shirakawa, who’d just handed power to his son Nijō, lived in the Sanjō Palace at Kyoto. Each man was backed by one of the opposing sides of the king-making and manipulative Fujiwara clan whose principal Fujiwara no Nobuyori was particularly duplicitous.

But the rival Taira and Minamoto clans were in the frame too:

You’ll note that, from those names, and as was mentioned before, the Fujiwara clan was hedging its bets.

Fujiwara no Nobuyori saw an opportunity for insurrection when the Taira clan principal Taira no Kiyomori left the city on a pilgrimage and seized Go‐Shirakawa. The ox-pulled carriage sent to carry off the former emperor is the first thing we see. Nobuyori (in the colourful robes) arrives at the palace and orders Go-Shirakawa into the cart amidst the melee. Nijō was caught too. Nobuyori later appears on horseback. Minamoto no Yoshitomo (in red armour and a horned helmet) appears a couple of times, behind the cart when it hits the veranda and then with a bow and arrow. Essentially there is a lot of carnage and gratuitous sexual violence.

Ultimately Nijō, the 78th emperor, was to escape when Taira no Kiyomori returned and he ruled til 1165.

The scroll is absolutely packed with detail that helps modern understanding of these times. We see; 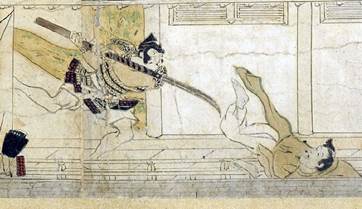 Above: Typically-visceral violence in ‘Night Attack on the Sanjō Palace’.

Above: The closing sequence of ‘Night Attack on the Sanjō Palace’.

In summary here is a startling work from a bygone age that relates, with some degree of reliability, a complex unfolding of events during startling times.

It is possible to purchase prints. You need to do so via the licencing page of the owners, the Boston Museum of Fine Arts, at Night Attack on the Sanjō Palace, from the Illustrated Scrolls of the Events of the Heiji Era (Heiji monogatari emaki) – Works – Museum of Fine Arts, Boston (mfa.org).