Rembrandt van Rijn (1606 – 1669) Rembrandt Harmenszoon van Rijn was a prolific multitalented artist and arguably not just the greatest that the Dutch ever produced (if we dismiss his contemporary Johannes Vermeer, which might be unfair), and quite possibly the greatest 17th century

Rembrandt Harmenszoon van Rijn was a prolific multitalented artist and arguably not just the greatest that the Dutch ever produced (if we dismiss his contemporary Johannes Vermeer, which might be unfair), and quite possibly the greatest 17th century master, but one of the greatest talents that the world ever witnessed.

He wasn’t just a painter either, being a draughtsman and printmaker but an art-dealer and collector too. And he didn’t limit himself in the subjects he depicted since they span portraits (including group portraits) and self-portraits, landscapes, even the odd seascape, and scenes from life as well as from mythology and the Bible. He even painted dead meat, though in doing so one could see an interest in physiology (a science that had only really begun in earnest during the 16th century but of course underpins the accurate illustration of all animal life including humans).

His work has immense historic and cultural significance because it charts the so-called Dutch ‘Golden Age’ (of 1588 to 1672) during which the Low Countries (the borders have changed since then but we’re talking about what is now The Netherlands, Belgium and Luxembourg) were ‘on a roll’ owing to their seagoing might and eminence in respect of international trade (they were the only Europeans trading with Japan, for example) that could fund philanthropy and progress in the arts and sciences (including the aforementioned physiology).

Left: The famous ‘Anatomy Lesson of Dr Nicolaes Tulp’ (1623) which was a commissioned portrait for which those featured paid handsomely. It includes some anatomical gaffes and in reality the chest would be opened before the arm. But he seemed to have got away with that. It made his name. Right: A remaining fragment of the fire-damaged ‘Anatomy Lesson of Dr Deijman’ (1656).

As for Vermeer, it has been observed that he was perhaps an introvert to Rembrandt’s extravert (the latter certainly painted himself a lot, maybe as many as 90 times, though they were warts-and-all self-portraits). But most of Vermeer’s output featured domestic interiors with the same people stuck in the same two rooms of his home. Such restrictions, self-imposed, chip away at any claim for him to be as significant as Rembrandt whatever his talent.

Rembrandt has a name that has associations with great lighting (and an abject lack of it), and with quality. Most people know the name (there is a pop-group with it, hotels and more, and to be ‘Rembrandted’ means ‘to be framed’ for a crime one didn’t commit). So his place in history is assured. Yet not everyone likes Rembrandt’s work. Notably in 2009 the contemporary artist Damien Hirst (famous for pickling a shark and sticking diamonds on a skull) rubbished his efforts and claimed that ‘Anyone can be like Rembrandt’. Who was he kidding?

Rembrant (note the original spelling with no ‘d’) Harmenszoon van Rijn was so-called because he was the son of Harmen and his notional hometown was near the Rijn (the Rhine) though in fact he was born in Leiden. Actually he added the ‘d’ for reasons unknown. His dad was a miller, Harmen Gerritszoon van Rijn, and his mum was a baker’s daughter - Neeltgen Willemsdochter van Zuijtbrouck. The whole family was, and remained for a long time, religious. Doubtless faith would have been some solace to Rembrandt, since three of his five children died in their infancy, a fourth one - his son Titus - later, and his wife Saskia died at 30 from what was probably TB. Yet ultimately, bombarded by so much tragedy, he was to become an atheist.

Rembrandt initially studied in Latin (which explains why he signed his early work ‘RHL’ (standing for ‘Rembrandus Hermanni Leydensis’), was off to university in Leiden at 14 but quit, was subsequently an apprentice for three years with Jacob van Swanenburg (a Leiden-based Italian-educated Dutch artist) then six months with Amsterdam-based Pieter Lastman (a head, hands and feet specialist) before six months with Jacob Symonsz (one of three brothers whose work is confused, probably in Delft, and certainly at least one brother had trained in Italy) and quite possibly, at some point, with Joris van Schooten in Leiden.

Setting up in Amsterdam

In 1631 Rembrandt set up in Amsterdam, joined a local painters’ guild, took on students and started to paint portraits – which is where the money was. But he was sufficiently confident to expand what he did and was soon not only painting much more than portraits but playing with colour, with light and shade, on big canvasses where he discovered an ability to convincingly convey expansive psychodramas.

Did His Stereo Blindness Help Rembrandt to Depict Depth?

There is a theory that Rembrandt suffered from a condition known as ‘stereo blindness’. It is entirely possible to have this condition, which allows normal vision in every other sense, in one or both eyes if there is damage to the corpus callosum (nerve fibres joining the eye to the brain) or the optic chiasma (a point below the brain where the optic nerves cross each other), perhaps because of a tumour. But somehow it may have enabled him to depict three dimensions on a flat surface better than most people could do (in the same way, perhaps, that colour-blind people can ‘see through’ camouflage better than people with normal colour vision).

After his wife Saskia died Rembrandt took up with his former maid Hendrickje Stoffels, who was to become his common-law wife and with whom he had a child Cornelia who was the only member of Rembrandt’s family to survive him when he died at 63 in poverty having simply overspent his earnings. It seems that Hendrickje and Titus (who was not a monk despite being depicted as one) ran the business and left Rembrandt to paint. But it was run into the ground. As a consequence of that the great man went into a pauper’s grave which was subsequently dug up as was common practice with the poor in that era. 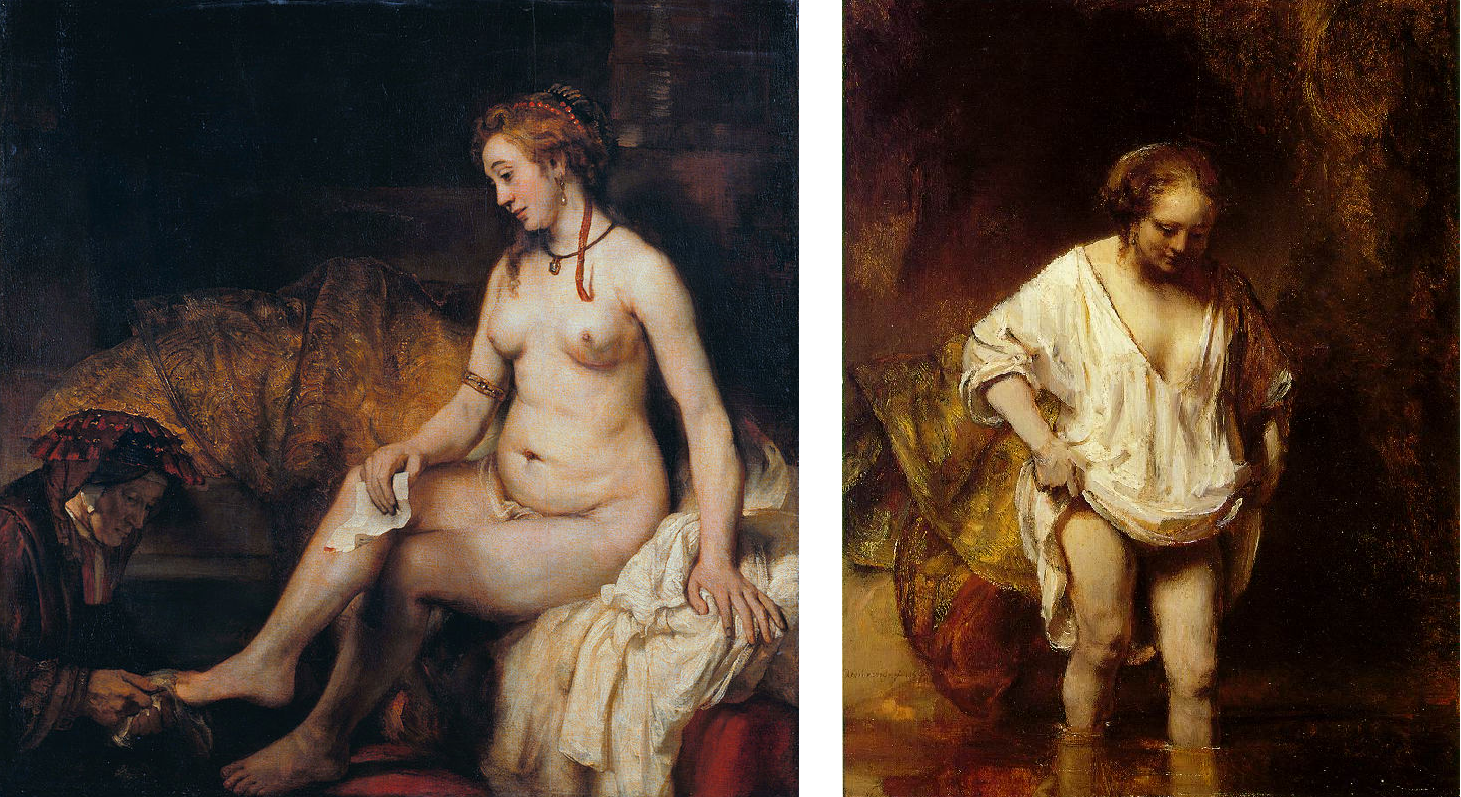 In summary Rembrandt was a one-off. And a creative force who elicited the adulation of fellow artists.

You can easily and affordably buy unframed prints of his work. The National Gallery site at Rembrandt Prints | National Gallery Shop is one place to obtain these. Originals are pricey. But be careful if you intend to bid for one. Because questions remain about what he painted. Of the 2,000 works that have been attributed to him it’s said that only 300 are probably his. Part of the problem is his students could be good and he had bad days. And beware of bargains; his stolen ‘The Storm on the Sea of Galilee’ is still missing. But even a self-portrait can set you back a cool Ł16m.