Not Only Frames and Hangers; How EasyFrame has Cultivated an Enduring Relationship with ‘Only Fools and Horses’ Fans It won't have escaped you that the Zanna brothers are pretty astute businessmen. And nobody would have blamed Nick if, wearing his commercial head, he made a beeline for a fan-club that services a nation's perennial obsession with a legendary British

Not Only Frames and Hangers

It won't have escaped you that the Zanna brothers are pretty astute businessmen. And nobody would have blamed Nick if, wearing his commercial head, he made a beeline for a fan-club that services a nation's perennial obsession with a legendary British comedy institution. Surely the 'Only Fools and Horses' fan-club would have signed memorabilia and merchandise galore to frame? Yet the relationship between the Zanna brothers and their Trotter counterparts is almost accidental, enduring, more to do with an understandable obsession than profitability, and worth recounting. 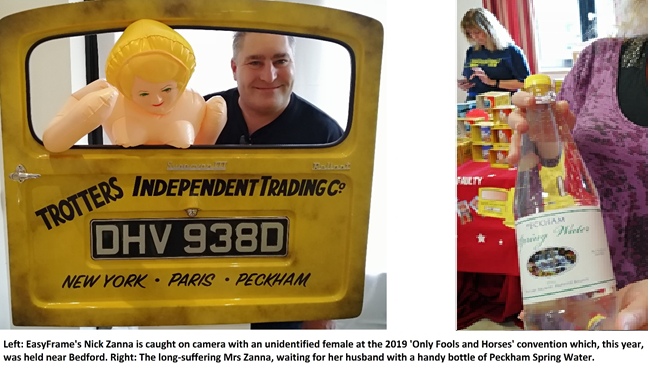 How it All Started

Nick, man and boy, has been an been 'Only Fools and Horses' fan for a quarter of a century. Indeed Nick recounts how, back in 1994, he wrote to the BBC to cadge some autographs. In those days Auntie was quick to oblige so the obsession was fuelled. Then in 1996 Nick used Yahoo (yes it had already been invented) to find a fan-club run by Perry Aghajanoff, who's spent decades cultivating great relationships with the cast. But Nick dragged brother Rob into his obsession. And the Zanna bothers pitched up on-set to watch the filming of an episode. This led to a burgeoning friendship with not just Perry - who is the big cheese as far as the 'Only Fools and Horses' appreciation society is concerned - but (from 2009) with Craig Wood, the other mover-and-shaker (and a full-time logistician with another business to run) who's likewise credited with the success of an annual event that has gone from strength to strength. He's done a lot to tweak the offering over the last couple of years. That's why this year's convention, and they're always in October but take 9 months to organise, sold out in minutes. See https://www.ofah.net/blog/only-fools-convention-2019/ for details on the one you've probably just (damn, damn, damn) missed.

How the Conventions Evolved

The convention this year happened to be in Sharnbrook, near Bedford. But over the years it's been a moveable feast (in every sense) that has landed in Southend, Basingstoke, Bristol, Margate and elsewhere. 25 years ago the conventions ran for just one day, but a gruelling 12-hour one, in big sports venues and there'd be 2,000 tickets. The crowds that the event attracted necessitated a police presence, there'd be hundreds of seats for those taking a rest from autograph queues, there'd be mass-catering to organise, there'd be all the liabilities you'd expect at such large gatherings, and yet there was hardly any profit in it. So, cannily, after the 2016 event at the Kia Oval (which is Surrey County Cricket Club's ground) Perry and Craig opted to make the events more compact and exclusive. And - therefore - in doing so they became more manageable. Importantly, Perry and Craig feel, the experience for convention-goers today is better than ever too. The ambiance at events is family-orientated, with lots of youngsters attending with parents who, themselves, once came as kids. And, as fans themselves, the significance of this for the organisers is important.

Understandably David Jason et al originally saw the fan-base as nutters. In all probability the actors didn't truly recognise just what a classic they, and the genius of writer John Sullivan, had created. But, as time went by, he and other actors (this year John Challis aka Boycie and Sue Holderness aka Marlene pitched up to sign hundreds of items with a smile) have good-humouredly lent their support to the get-together. Indeed Jason, now on board, regularly signs items for Perry.

Clearly not all of the cast are ever going to be at the conventions. Yet fortunately there are some great lookalikes with whom many fans love to pose for photographs. 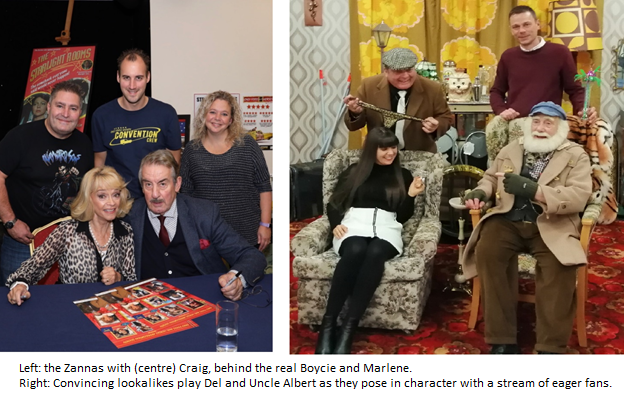 So How Did Nick and EasyFrame Get Involved with the Only-Fools Framing?

Nick Zanna has been involved, in a true sense commercially, for the 20 years since 1998. And that was almost accidental. It was only when Perry asked what he did for a living, and the guys had known each other for years by then, that Nick admitted to his expertise. Then Perry pointed out, perhaps belatedly, that Nick's skills and resources might be a bit of a blessing given the vast numbers of items that convention-comers needed framing.

Over the years there must have been thousands of items to frame. They have ranged from Del Boy's 'titfer' (his hat; something that required a very deep frame for obvious reasons) to the mobile phone he was using when he managed to get its aerial up his nose. There have been shirts galore, countless scripts, and even items like scale models of Denzil's lorry (as driven by actor Paul Barber in the episode). Yet anything can be framed, box-frames and similar present no problems, and with the burgeoning value of such memorabilia in mind EasyFrame can utilise materials that are not only effectively fireproof but make theft difficult.

The Future. And How 2020's Leap Day May Well Deliver a Huge Surprise

Craig and Nick are cagey about what next year's convention will bring, but apparently in the meantime they anticipate a huge treat in store for the 'Only Fools and Horses' fans.

There is likely to be a special one-off event at which one of the principal actors from 'Only Fools and Horses', for the very first time though it's hoped not to be the last, will meet members and sign memorabilia for them. This is pencilled in for February 29th 2020, though. The location is not yet confirmed but Craig and Nick will obviously share full details just as soon as it's all signed off.

So, if you want to join in with either that special event or the annual convention (and I'm sorry but I cannot confirm any more yet), then you ought to set your alarms for the release of next year's tickets. 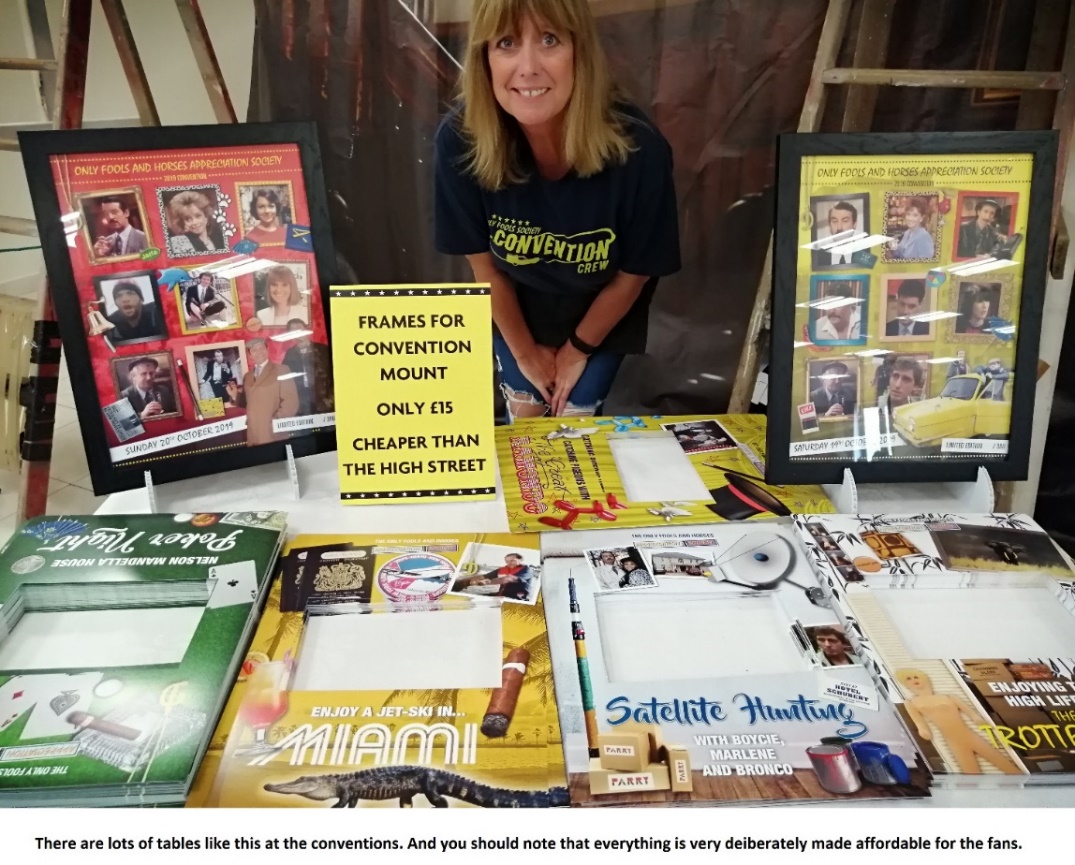 EasyFrame has, really by accident, become the preferred supplier for one of television's most bankable assets. And its resources make it a go-to for other fan-clubs that would like to provide their aficionados with affordable high-quality frames.

It is also worth mentioning that this year the Ciampi family (Ciro Ciampi is Nick's and Rob's cousin) were the hosts since the opulent Sharnbrook Hotel venue is theirs. So any club looking for a great location for their own conventions could do worse than have a chat with Nick.

If you want to contact Nick about 'Only Fools and Horses', or framing, or indeed how he or EasyFrame could support another fan-club, his email is nick.zanna@googlemail.com.

But if you want to contact Craig Wood his email is craigwood@onlyfools.net

Finally, though, if you are framing anything precious, whether it's a memento of a great comedy institution or something entirely different, it's always worth going straight to a professional framer like EasyFrame for advice. To that end EasyFrame is on 01234 856 501 and emailable via sales@EasyFrame.co.uk.