Oliver Yu Chan, a youthful artistic genius to watch This article is about London-based Oliver Yu Chan. He’s a prodigious young Anglo-Chinese talent who has had a dozen of his murals (enlarged works) exhibited by constructors along 100 metres or so of the very twee hoardings that screen the constructio

Framing of a new artist.

This article is about London-based Oliver Yu Chan. He’s a prodigious young Anglo-Chinese talent who has had a dozen of his murals (enlarged works) exhibited by constructors along 100 metres or so of the very twee hoardings that screen the construction-work at the Royal Free, up Rosslyn Hill in NW3, at the trust’s suggestion.

Aged 32, Oliver hails from Swiss Cottage and his family run a café (Oliver’s Village Café, no less) in Belsize Lane, close to the hospital. He’s autistic but has found his metier in art. And, following encouragement from his mum Caroline, he’s been painting for over two decades.

It’s probably not hyperbole to suggest that Oliver’s work, and I guess we could brand him as a ‘resurgent impressionist’, could well be a sound investment with even originals being affordable! (For the moment, at least. Ordinary people could, once upon a time, afford David Hockney’s art too!) 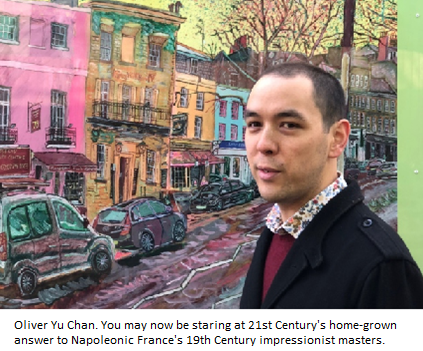 The impressionists - and we’re talking about the likes of Cézanne, Degas, Manet, Monet, Pissarro, Renoir and Sisley - were responsible for a style that utilised mass-manufactured paint which let them: 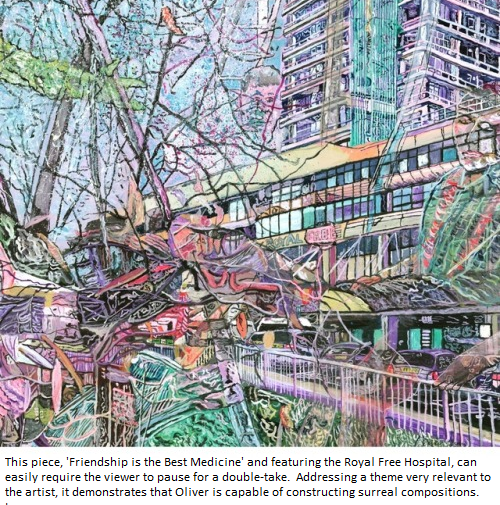 Actually those impressionists, and French impressionism dates from around 1860, were influenced by Japanese woodblock prints. So it is almost as if art has gone full-circle when Oliver Yu Chan, ethnically Oriental, can work 150 years later as what one could easily term a neo-impressionist (in a truer sense, perhaps, than the neo-impressionists like Georges Seurat who were labelled as such by the contemporary art critic Félix Fénéon). Though perhaps we should settle for ‘resurgent impressionist’ to avoid confusion or accusations of copycatting.

Oliver admits to being influenced by the 19th century Dutch post-impressionist Vincent van Gogh (no surprise there!) And the 20th century Mexican portraitist Frida Kahlo (a bit of a surprise here, since she was heavily influenced by native Aztecs and you’d not really expect a young Anglo-Chinese artist to know about her!)

Recognised as autistic by the time he was four because - by his own admission - he struggled to communicate, was socially awkward, had obsessive behaviour patterns and couldn’t focus, Oliver attended special units until he was 18 although he also went to art classes with mainstream students at King Alfred’s School in Golders Green before completing (with specialist learning support) a four-year Art and Design Course at Westminster Kingsway College.

He’d actually been press-ganged into art by his mum. He tells the story of her giving him a task to draw a hedgehog. To his surprise and delight the result was hedgehogy, and his growing interest in art gradually helped him to find calm, to settle, and to find his purpose.

Later Oliver was to take a Fine Arts Foundation Course at Byam Shaw College before enrolling at The Art Academy, an independent college at London Bridge. During this time he spent a month in France and Spain taking photographs of buildings from unusual angles (a la impressionist!)

In 2014 he graduated with a 2:1 Diploma in Fine Art, though the paper qualification is almost an irrelevance. For Oliver has the potential to be recognised, in time, as a great. That’s why, four years after graduation, he’s been gifted his huge public showcase in NW3.

Often working from photographs, then using acrylics on canvas paper, Oliver specializes in urban landscapes but he’s spent time studying and drawing human anatomy. He also loves to paint those he knows (sometimes in a cubist style, akin to that of Picasso, and he can create surreal imagery too) as well as exotic food. And, actually, he bakes cakes for the family café too. He’s even run an art-and-baking workshop for a charitable end! So he’s a foodie in every sense!

Reading the artist’s own candid and endearing description of his life one is struck by his eternal anxieties, his occasional loneliness and social awkwardness. But, more than that, one is struck by his deep-rooted decency and a willingness to help others who may well have misfortunes similar to his - but others who have not simultaneously been as fortunate. For art has been Oliver’s get-out-of-jail card. One really wonders whether such a man would, were he to be given the option of a life without autism, turn it down on the grounds that to be without his disability might cruelly rob him of his enviable talent. 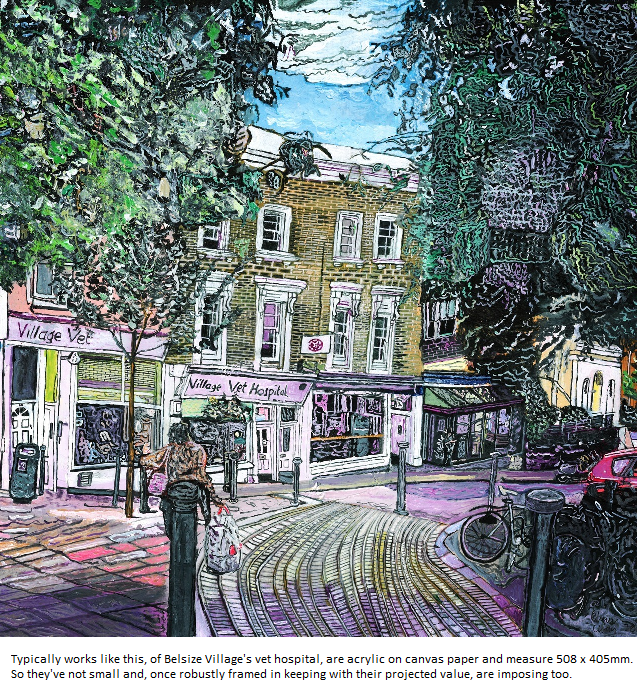 But here’s the rub: this is a young man who speaks animatedly of an interest in traffic-lights and roundabouts in a way that, one suspects, doesn’t mean that he’s going to immerse himself in subject-matter that would make trainspotting look riveting. It means, more probably, that he is eminently capable of discerning something in traffic-lights and roundabouts that nobody else does - and subsequently depicting it in a way which would enthral his audience.

In summary Oliver Yu Chan is a contemporary genius who could easily be working for the next 50 years. His work will grow in popularity. Prices will surely soar. And a signed print is absolutely certain to do a lot more than simply retain its value.

To find out how to obtain his work go to his website at www.oliversvillagecafe.com where lots of it is on show.

For unframed print prices (excluding postage and packing) see below.

Amazingly, originals, 508mm x 405mm, are available for as little as ca Ł850. Yet they take Oliver a week and a half or so to paint. So give him a few years and you may be able to add one or two zeros to those prices.

Importantly none of Oliver’s work comes framed. So if you buy any of Oliver Yu Chan’s work you’ll need it framing. Unless you know your stuff when it comes to picture frames and mounts it’s always worth going to experts. EasyFrame is an obvious and affordable supplier, whether you want to source all you’d need to do the job yourself or have them do it for you.

If you buy any of Oliver Yu Chan’s work you’ll almost certainly need it framing. Unless you know your stuff when it comes to picture frames and mounts it’s always worth going to experts. EasyFrame is an obvious and affordable supplier, whether you want to source all you’d need to do the job yourself or have them do it for you.