The work ‘Akarbarnama: Mines Exploding During the Siege of Chitor’ is a 1009mm x 4150mm watercolour painting executed within the Indian subcontinent (so in modern-day Pakistan and India) during the Akbar period of the Mogul Empire by the artist Sarwan though the composition is attributed to Miskina. Although it was apparently created in the early 1590s, it depicts an imagined aerial or bird’s-eye view of an event that had actually occurred a quarter of a century earlier in 1567. Be aware that this work is often confused with a corresponding work of the same dimensions that depicts the work of military engineers during the same siege. They were on opposite pages. Sometimes they are collectively viewed as being the same piece.

As the Moguls besieged a fiercely-defended fortress of the Rajput clan at Chitor (usually spelled Chittor, the V&A should note, but also known as Chittaurgarh, the capital of the then-kingdom of Mewar which has always been a Hindu centre in Western India), the Mogul sappers (military engineers) prepared covered trenches to protect them from bombardments emanating from the battlements above as they got close enough to lay explosives. When the explosives were detonated, a little prematurely, it seems that 200 of Akbar’s Moguls were accidentally killed but he’d tasked 5,000 men with that and the cost in lives was bearable. In the event the defending Rajputs sealed the gap but ultimately the Moguls breached the walls in several places and Akbar himself then shot and killed the Rajput commander, Jaimal, with a musket.

The impressive size of the work belies the fact that (if we look at the panel featuring the explosion) it was just one page from the Emperor Akbar’s imposing chronicle of his reign, the so-called ‘Akbarnama’ which was only written by Abu’l Fazl (the court historian and poet) in 1592 to 1594. Akbar had been born Abu'l-Fath Jalal ud-din Muhammad and lived from 1542 to 1605 but reigned from 1556 to 1605 as the Moguls’ 3rd emperor, Akbar the Great. So what we have here is a reimagining of an event that had occurred early in his reign, commissioned (as these things so often are) by an ageing ruler who was increasingly aware of his own mortality in order to create an enduring narrative by which he would like to be remembered. It also served a purpose in that, as his succession became a hot topic, Akbar’s strength would not be prematurely forgotten and might prevent any would-be successors from jumping the gun to depose him or worse. 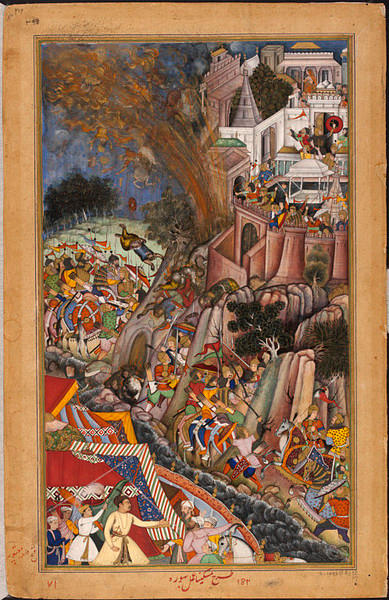 Miskina and Sarwan were, along with Bhura (see the work below) amongst at least 49 court artists known to have been active during this period. In an era when work was not usually signed it has been attributed as a consequence of mentions in records, though sometimes the artists’ names were written in red under their work in the Akarbarnama. But what should be understood is that such artists were collaborative, working cheek-by-jowl in the same studio, and it is therefore difficult to discern exactly who did what. 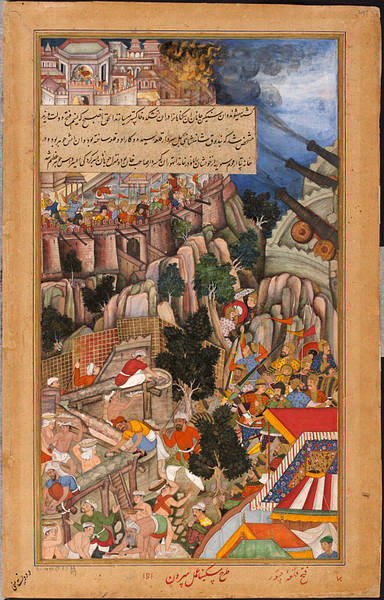 Above: Miskina and Bhura’s opposite page from the Akarbarnama featuring the work of sappers at the same siege.

We do know that by the 1590s Miskina was already one of the elders in the circle. He is also credited with painting the emperor Akbar. We know that he collaborated with Sarwan on other projects. For example they worked in the same way - with Miskina handling the composition and Sarwan the detail - on their depiction of the construction of the fortress at Agra (see below).

What is also interesting, given the fact that the Mogul Empire was essentially Muslim, is that Akbar was pretty tolerant of Hinduism, Buddhism, Sikhism, Jainism, Jesuitism and Christianity. So Miskina even painted Saint Christopher carrying Jesus Christ as a child. 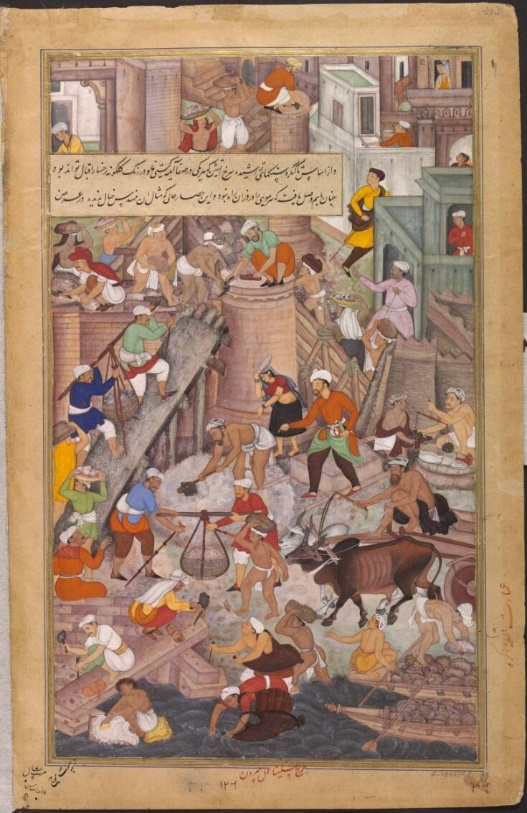 Above: Miskina’s work depicting the building of the fortress at Agra. He composed it. Sarwan painted in the details.

Explaining These Two Paintings as a Pair:

Europeans write from left to right. But Persian / Farsi (the official language in the Mogul Empire, though Arabic, Hebrew, Aramaic, Azeri, Dhiveri/Maldavian, Kurdish (Sorani), Urdu and Sindhi do likewise) works from right to left. This appears to explain why the painting on the right shows the preparatory work of the sappers in digging trenches. And then the painting on the left shows the untimely explosion.

Above: See the paintings as they appear in the Akabarnama. And adopt the Persian convention to think right-to-left.

In fact the siege depicted lasted from October 1557 to February 1568 and in it Akbar besieged around 50,000 people including 8,000 Rajputs though the rest were peasants. The fort was on a 150m hill and spans 700 acres (nearly 3 square kilometres). It was heavily fortified and had a secure underground water-supply. So it was tough to invade though it had been done before a couple of times and Akbar would have known this. He had already come to agreements with other regional rulers that allowed access through their lands to important seaports that were vital for the expansion of Mogul trade but Udai Singh II, the Rana (or king) of Mewar, was refusing to pay homage to Akbar. So Akbar sorted out other nearby sources of potential support for Udai Singh II then pitched up at Chitor, Udai Singh II’s capital. Realising he had a tough job, Akbar set stonemasons, carpenters, builders and explosives experts to undermine the walls as he bombarded them to keep the Rajput heads down. He also had a huge siege-cannon cast onsite.

The explosion seen (and the painting appears to show just one explosion) could well be the initial one which was premature and thus accidentally killed about 200 Moguls. When the gap it created was quickly sealed by defenders the Moguls had to rethink and ultimately brought down walls at several points simultaneously. They then slaughtered perhaps 25,000 people, many of them entirely-innocent. But it took another 4 years before Udai Singh II was caught and killed, and after that his son Pratap Sigh remained a problem. But, when he died, his successor Amar Singh decided it made sense to capitulate and the Mogul Emperor Jahangir, who’d succeeded Akbar, let him go back to Chitor on condition that it was not repaired.

It seems that all of the pages in the Akabarnama (occasionally referred to as the ‘Akbarnama’) were actually on three sheets of paper comprising a starch-sized laminate, marked out with black chalk then painted upon with very thick opaque watercolour pigments (which seems to have been key to retaining the colour vibrancy over the centuries) using gum Arabic (which has a base made from the acacia plant) but without a binder so conservation in respect of the flaking in places is difficult. Many of the colours were burnished, that is they were polished by rubbing (possibly with metals). 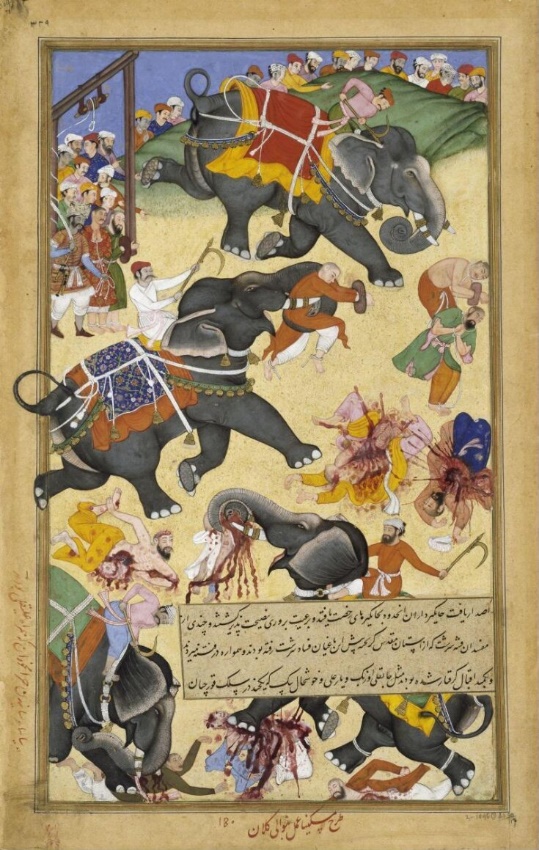 Above: Another piece by Miskani, this time working with Banwali the Elder, featuring elephants used to torture and kill captives.

What Happened to the Akabarnama and these Paintings?

When Akbar died the Akabarnama remained in the library of his son Jahangir, the new emperor, then that of his successor Shah Jahan, then his - Aurangzeb. So we are told. But that’s an incomplete simplification of the provenance. The British Major-General John Clarke acquired the Akabarnama when he retired in 1862, after there had been another 16 emperors, when he was Commissioner of Oudh and India was under British rule. This was, of course, during Queen Victoria’s reign. The British deposed the last Mogul Emperor in 1857. So such a relic might well have been seen as a redundant cultural vestige, ‘fair pickings’ and easily-acquired. The general’s widow, Mrs Frances Clarke, sold it to the South Kensington Museum, which became the Victoria and Albert Museum, in 1896 (5 years before Queen Victoria, Empress of India, died). 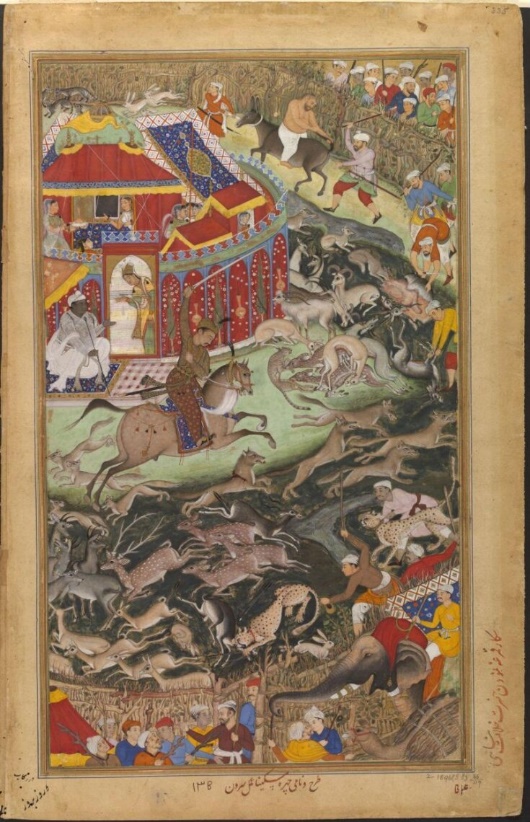 Above: Miskina and Sarwan also collaborated on this painting of Emperor Akbar hunting. Miskina did the composition and the emperor’s face. But Sarwan did the rest.

In summary here is an historic document, one which ostensibly depicts a set-back in a battle and one that therefore leads us to conclude that what Emperor Akbar had depicted by his court artists was indeed essentially accurate. The artists involved would have been able to talk to those who were there at the siege. Did they walk around the site? Possibly. But Akbar’s palace of Sikri is in northern India and almost 1,500 miles from Chitor, which is close to the southern tip of the country. So that’s probably unlikely. We can therefore safely assume that a degree of artists’ licence is involved.

The Mogul Empire is important. It endured for well over three centuries, ultimately falling only to the irresistible might of the British Empire, and was largely secular in some respects. That enlightenment (and the emperors often employed non-Muslim artists) allowed artistry to make advances that bear comparison to those being made in Europe.

It is possible to affordably purchase the rights to print this work (remember its dimensions are fairly sizeable) via the V&A Museum and their portal at vaimages@vam.co.uk.