Why for Matchstick Man L. S. Lowry there was No Time Like the Present This article is about Laurence Stephen Lowry, whose unique style and wish to depict contemporary urban landscapes populated by matchstick men took him from a life of 'downwardly-mobile' Victorian poverty to the point where a single painting could sel

Why for Matchstick Man L. S. Lowry there was No Time Like the Present

Framing of a Master

This article is about Laurence Stephen Lowry, whose unique style and wish to depict contemporary urban landscapes populated by matchstick men took him from a life of 'downwardly-mobile' Victorian poverty to the point where a single painting could sell for Ł5 million or more, and he holds the record for turning down the most honours including a knighthood, though he's still sit in a home with sagging armchairs and frayed carpets.

In recent years, following the Tate's 2013 exhibition 'Lowry and the Painting of Modern Life', his work has sold well. Indeed it seems that there's even a healthy demand for prints of his work, with them fetching up to Ł22,000 a pop, but original pencil drawings can be had for far less so it's worth keeping one's eyes open for them in auction-rooms or house-clearances. Yet this is a case of 'buyer beware', since the BBC1 series 'Fake or Fortune' advised viewers that Lowry is 'probably the most faked British artist, his deceptively simple style of painting making him a soft target for forgers'.

Lowry was born at the close of the 19th century in the industrial North West, a handicap in itself I think we can all agree, to a working-class home with a father who was a clerk and a mother who was a teacher. Sadly it seems that young Lowry had poor relationships with both parents. His mum made no secret of the fact that she had wanted a daughter and described her son as 'clumsy', quite possibly blaming him for health issues that stopped her from teaching (and the career as a pianist to which she aspired) after his birth. She never appreciated her son's artistic talents, repeatedly telling him he was a failure, and it seems that Lowry was saddened by the fact that he only achieved recognition after the death of a mother whose approval he sought. Despite her callousness, after she died he was suicidal. In the meantime he perceived his father as 'a cold fish', though that might perhaps have been unfair since he was evidently the more caring of the two parents. Moreover both father and son were dominated by Lowry's depressive-and-bedridden mum, who apparently milked her ill-health for all it was worth. It seems like Lowry was still at home when he was 35, at which point his father died leaving them in debt and the need to care for his mum meant he had to paint at night. After she died the house was repossessed, though that seems to have largely been a consequence of Lowry's own depression and consequential neglect than it was poverty.

Amidst all of this one cannot blame the young Lowry for seeking an escape. And it, his salvation, came in the form of art – together with an obsession with and appreciation of local 'dark satanic mills' (in this case textile factories, since William Blake's expression is nowadays considered to be ambiguous and may have been a sideways reference to orthodox Christian churches). Lowry spoke of Pendlebury, where he lived for 40 years, and how he'd initially disliked its industrial landscape, then got used to it, then absorbed it, and then become infatuated by it. He saw it as “Very fine industrial subject matter” and realised that here was something that no fine artist had hitherto recorded. Nevertheless, much of his work, he admitted, involves composites which merged observation with imagination and the coupling of components from different locations. It's also worth saying that Lowry used only a limited palette comprising lead, titanium and zinc whites (he switched to working on white backgrounds fairly early on) together with ivory black, vermillion, Prussian blue and yellow ochre. So fakes are often eliminated when they incorporate other colours.

Lowry originally took private tuition in antique and freehand drawing but was capable enough to win places at the Manchester School of Art where he was taught and hugely influenced by the French impressionist (Pierre) Adolphe Valette (though critic D. B. Taylor at the Manchester Guardian persuaded Lowry to lighten up and switch to white backgrounds) and then Salford Royal Technical College. Lowry was inspired by post-impressionist Van Gogh's work, which he saw in Manchester. Notwithstanding this schooling he worked as a rent-collector for the same company until he retired at 65. This might, of course, be attributed to a perception that he was otherwise at perennial risk of getting into financial trouble as his parents had done (and as some of his clients when he was collecting rents, would do too). People scoffed that he was a 'Sunday painter', questioning his commitment. But, as he himself pointed out, he was a Sunday painter who painted every day of the week. And, it seems, every night too.

An Oddity Who Had the Time for Anyone. But Not Himself

Lowry was not popular as a kid. Then as an adult he was a bit of an isolate who clearly suffered from depression and spent almost as long in his second home – which he professed to dislike – as he did in the home where he'd grown up. He once said, tellingly, that all the characters in his paintings were lonely. Importantly he never even had a girlfriend let alone a lover or wife. But he certainly had friends and formed an enduring friendship with Carol Ann Lowry (supposedly no relation; oddly he forbade her from checking at Somerset House to see if they were related) who had approached him as a 13-year-old kid to ask about how to forge a career as an artist. She owns the rights to his signature and everything else since she was his heiress.

L. S. Lowry left behind not just landscapes and portraits ('Coming from the Mill', 'The Viaduct' and 'The Football Match' are some of his most famous works) but a series of rather risqué erotic works featuring a mysterious 'Ann' (these are kept under lock and key at the Lowry Centre but visitors may ask to see them). He was, though, a bit of an impish raconteur known to make up all sorts of tales so this ability to fantasise may fit with the sexual repression of a man who apparently never had sex. Oddly he often used to take Carol Ann Lowry to the ballet, though she was 57 years younger than him. Certainly he seemed to have a thing about women being bound, mechanical and biddable, and loved the ballet 'Coppelia' about such a doll. He was strange in other ways, and for example had a house full of clocks (many or all of which he seems to have inherited from his mum) though none of them were set at the same time. Yet there was a kindness too; he'd draw total strangers on the beach, merely because they intrigued him, and then generously hand the work to them to keep. 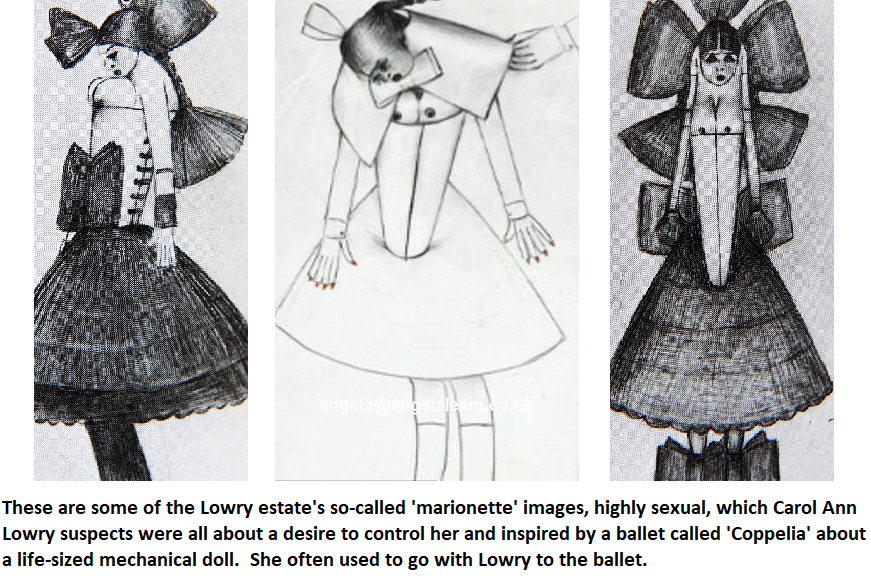 None of the weirdness, which would have raised eyebrows today, seemed to have hurt. Offered a knighthood, Lowry turned it down. But in fact he also turned down an OBE twice, a CBE once, and offers to join the Order of Companions twice. Yet he was a Senior Academician to the Royal Academy. He was appointed as an official war artist in 1943 (when he would have been too old to fight). He was Official Artist for Queen Elizabeth's coronation in 1953. And he accepted a doctorates from Salford and Liverpool. He even appeared on the Post Office's series of stamps, Great British Artists, in 1968. Yet after his death it's been easier to heap honours on him. Hence his work is on permanent display at The Lowry in Salford Quays, the Tate have had a retrospective exhibition, and his work has even recently been shown in Nanjing China where doubtless he is perceived as having been a man of the people and egalitarian.

In summary L. S. Lowry's work remains popular. And a signed print or sketch is likely to be a good investment as the urban landscapes for which he became famous disappear.

If you want to hear more about what made Lowry tick, go to www.bbc.co.uk/bitesize/clips/z3gkq6f where the BBC has a great recording of the man himself. He doesn't talk about the odder aspects of his life, let alone the strange relationship with Carol Ann Lowry to whom he left his entire Ł300k estate and most of his unsold paintings.

If you buy any of Lowry's work (to verify authenticity, and even see who has printed what, see the superb guidance at www.marklittler.com/lowry-prints/) you'll almost certainly need it framing. Unless you know your stuff when it comes to picture frames and mounts it's always worth going to experts. EasyFrame is an obvious and affordable supplier, whether you want to source all you'd need to do the job yourself or have them do it for you.