Jack Vettriano: Master of His Trade (Whatever the Critics Might Think) Jack Vettriano is probably Scotland's greatest living artist. Indeed he might be the greatest artist that Scotland has ever produced - and will ever produce. Certainly his sales and global popularity support the contention that he merits enormous res

Jack Vettriano: Master of His Trade (Whatever the Critics Might Think)

Jack Vettriano is probably Scotland's greatest living artist. Indeed he might be the greatest artist that Scotland has ever produced - and will ever produce. Certainly his sales and global popularity support the contention that he merits enormous respect. Yet he has probably been subject to more gratuitous vitriol from critics than any other painter alive or dead. This article looks at why those critics ought to button their lips, explains why the guy deserves a break, and tells you what he can do to transform your home or workplace.

Picking Himself Up By His Bootstraps

Born into abject poverty in 1951, Vettriano was raised in a grim Fifeshire miner's hovel where he had to share a bed with his brother, wear hand-me-downs and work from the age of 10 (giving half his earnings from picking potatoes, cleaning windows, delivering papers and milk, to his dad). His hometown was Methil (infamously described by travel writer Tim Moore as the only Scottish town that belonged on his 'even worse than you thought' list; see www.fifetoday.co.uk/news/is-methil-really-the-worst-place-to-visit-1-2213017 if you are insatiably curious!) So it may have been a mixed blessing that Vettriano was at least schooled there until he was 16. Though his spell in purgatory was to continue unabated. By turns he was an apprentice mining-engineer (anyone who cannot recall what happened to Britain's coal-mining industry should go and stand in the corner) and part-time seaside bingo-caller. Yet salvation was at hand. An apparently-prescient girlfriend bought him a box of watercolour paints in 1972, for his 21st birthday, and he took himself off to Kirkaldy Museum and Art Gallery where he studied its exhibits in order to emulate them. And this was the mark of the man. Self-taught because of his straitened circumstances, Vettriano initially learned simply by copying and adapting the work of famous impressionists. Later he was apparently to make use of a DIY art book called 'The Illustrator's Figure Reference Manual' (published in '87), drawing heavily on the poses of dancers and others within it. He's been mocked for this by people who ought to know better.

But so what' This is a man who hadn't been able to buy his own watercolours never mind a couple of wooden mannequins, let alone hire models. And in '87, when 'The Illustrator's Figure Reference Manual' was published (making '87 the earliest Vettriano could have plagiarised it), he not only split with his wife but was turned down to study Fine Art at the University of Edinburgh. Most people would have given in. Not Vettriano. Five years later he'd probably taught himself more than the lecturers at Edinburgh would have done, en route to which he'd executed 'The Singing Butler'. And in 2004 that work sold for Ł744,800 at Sotheby's. In my book this, and the fact that he reputedly makes around Ł500,000 a year just on royalties from prints on postcards and the like, is a reward he's thoroughly deserved for his enterprise. Vettriano didn't go through the system. He went around it. And one has to admire the determination of anybody who'd still find the self-motivation to keep hammering away, with no real reward or recognition, until he made it at 53. 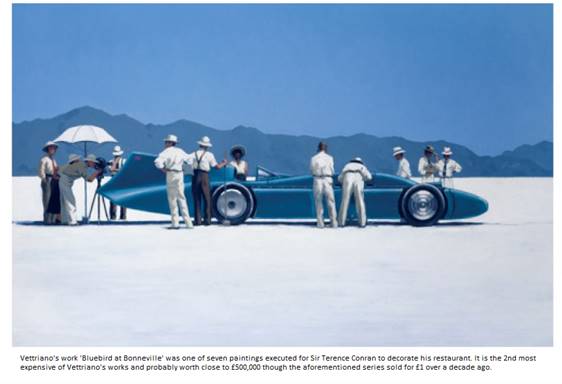 In the late 90s Sir Terence Conran commissioned Vettriano to paint a series of works celebrating the successes of the life of Sir Malcolm Campbell, and these were to decorate his 'Bluebird' eaterie. But Conran was simply a forerunner. Today Vettriano is apparently appreciated and adored by the likes of great Scots including Sir Jackie Stewart, Robbie Coltrane and Sir Alex Ferguson. But Sassenachs and the hoi polloi appreciate him too. Notably Tim Rice and Jack Nicholson own his work.

Not everyone is a convert. Vettriano's work is reviled by many critics who are probably (a) incapable of wielding a brush themselves unless it's to smear paste on wallpaper and (b) the same people who think that works like Tracy Emin's 'My Bed', Damian Hirst's 'For the Love of God' (his jewel encrusted skull) and Yoko Ono's entire back-catalogue comprise art. Having said that he has had some tardy recognition. He's got a well-earned gong ' an OBE ' and has been 'Great Scot of the Year'. Yet one suspects that Vettriano is a man who would still be painting even if he'd never achieved any fame, an observation that I am compelled to make having heard that he has himself admitted that amidst problems with drink and drugs (as well as what might be issues with addictions to gambling and sex if Wikipedia is to be believed) he feels that his creative highs are precipitated by his personal lows.

His Deeds Reflect a Man Who Never Forgot His Origins

I am minded to mention that Vettriano's generosity of spirit is in sharp contrast to that of his detractors. He's given work to several charities (Sport Relief, The Terence Higgins Trust, a hard-pressed gallery and conservation projects for example). And back in 2004 he set up a scholarship at the University of St Andrews to ensure that every 4 years a talented youngster, one who without his help would otherwise be unable to afford a university education, is sponsored to ensure they get it.

The art world is awash with snobbery. Though every year the public confounds the critics who think they can dictate what we should like in respect of the music, films, art and more. Thankfully Vettriano won't be stopped by critics any more than he was by the half-wits who rejected his portfolio when he tried to get on an undergraduate course. You too can defy the critics. His easel paintings cost anything from Ł48,000 to Ł195,000. But you can buy prints rather more cheaply and we thoroughly recommend that you visit the artist's website at www.jackvettriano.com. Both prints and originals would all look great on your walls. But you'll need picture frames first. EasyFrame is an obvious and affordable supplier, whether you want to source all you'd need to do the job yourself or have them do it for you. Any good framers will be able to show you a vast range of different solutions and advise on what might be the most suitable given the work and its proposed location.