‘The Inevitable’ is a 9-part ink drawing that was described by the Tate Modern, when it mounted an exhibition of Ibrahim el-Salahi ‘s work back in 2013 as the first ever retrospective of any African artist, as being evidence of ‘a new Sudanese visual vocabulary, which arose from his own pioneering integration of Islamic, African, Arab and Western artistic traditions’. But the hyperbole apart, the story of how Ibrahim el-Salahi came to develop his unique contribution to art is truly fascinating on a human level because the horrendous circumstances in which he conceived this work explain both the subject-matter and the style-of-execution he employed.

Jailed for just over 6 months in 1975 by a tyrannical military regime led by Jaafar Muhammad an-Nimeiry when he was 45, as a trained artist el-Salahi used to while away what he always knew might be his last hours by surreptitiously scribbling on cement-casings and burying the disjointed results in the sand outside his cell for fear of discovery. He never got to recover this work because whenever he answered to his name being called by guards he knew that he was about to be sent to solitary confinement, to another jail, to summary decapitation or to freedom. As it happened it was the latter which eventually occurred, and understandably - because any writing implement or medium could have invited torture or execution - he felt it was pushing his luck to ask if he could pop back to the yard to dig up and take his subversive scribblings with him.

‘The Inevitable’, which has been shown in Barcelona’s Picasso Museum and compared with Picasso’s work on several fronts (you’ll probably recognise the execution and purpose mirror that of ‘Guernica’), is described as ‘cubo-expressionist’, ‘modernist’, ‘symbolist’ and ‘surrealist’, and was conceived during this incarceration. Yet Ibrahim el-Salahi exited jail with more than a new-found determination to create work which espoused freedom. Because he also recognised that he could impose the same lattice-like structure, representing the modularity he’d had to impose on his compositions when he could only ever see a bit at a time, on scaled-up creations. ‘The Inevitable’ is 83 1/4 × 93 3/4 inches (211.5 × 238.1 cm), so monumental at over 2 metres square. 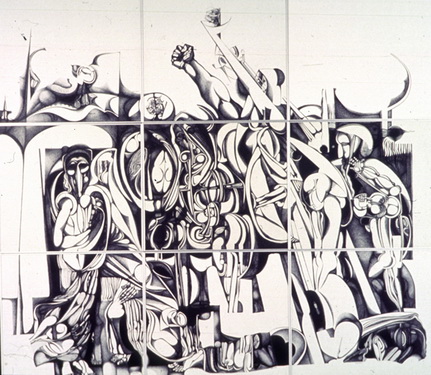 The Artist, His Training, Influences and That Perceived Link to Picasso

Born in Sudan (North Africa, just South of Egypt) during 1930, the son of the principal of an Islamic school, el-Salahi has been a public servant and diplomat. But he trained in design at what was then the Gordon Memorial College in the Sudan from 1949 to 1950 (he was in the 3rd intake and by then they’d only had 24 students, which flags up the value attached in the Sudan to artistic training). He learned to paint, draw, model in clay, bind books and spent more time on calligraphy (he’s already been grounded in that at school). He later attended the Slade School of Fine Art in London from 1954 to 1957. During this time he also attended a course in Florence, Italy. On graduation he subsequently taught for a while in Khartoum’s College of Fine and Applied Arts.

Whilst at the Slade he’d studied European art history from the Renaissance to modernity. He himself has spoken of his interest in Giotto, the supposed ‘father of the Italian Renaissance’, in Matthias Grünewald the German Renaissance painter who didn’t conform with Renaissance ideals (a one-off, his work was often mistaken for that of Albrecht Dürer) and in African motifs, Arabic calligraphy (often referred to as the ‘Hurufiyya’ movement in that this was culturally-significant and essentially-Islamic artistic lettering), in symbolic and decorative traditions and more. He also liaised with a Nigerian-based pan-African club for artists and writers. And he has spoken of being intrigued by Van Gogh on the basis of the Dutchman’s ability to conjure up art despite being tortured. Indeed el-Salahi speaks of similarly being mad though one suspects that he never was.

And what about those similarities between el-Salahi‘s work ‘The Inevitable’ and Pablo Picasso’s work ‘Guernica’? Well the latter was painted for political reasons (to mark a German attack on a Spanish village) in 1937. But el-Salahi is a little bemused by comparisons. ‘Guernica’ was painted when he was only seven, he’s never seen it, and he claims he was not influenced by it either. Meanwhile Picasso died in 1973 before ‘The Inevitable’ was executed and he’d therefore never have seen ‘The Inevitable’. So we could probably conclude that the similarities are coincidental.

Actually el-Salahi once said of the comparison in interview that “It’s the rhythm of calligraphy and African motifs. This is what excited me and why I did that work. It might look to your eye like something related to Picasso. But I assure you it’s not. But it’s up to you if you see it. If you see it as something influenced by Picasso let it be because I present the work and my job is finished. When the work is finished you can interpret it the way you want. It’s a free world”. 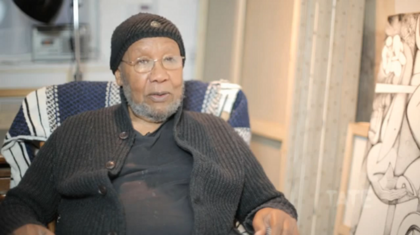 Between 1969 and 1972 the artist worked at the Sudanese Embassy in London, during which time he didn’t execute much art though he admits he spends extended periods in other activities including some when he is working to support and encourage the creation of educational institutions within Sudan.

El-Salahi was working on such projects at the Sudanese Department of Culture as the Assistant Cultural Attaché when he was arrested in 1975 and held in the Cooper Prison, and this seems to have been on the basis that he was related to a human rights lawyer who was involved in insurgency against Jaafar Muhammad an-Nimeiry’s regime. In fact the artist has in later years, when he was free and faced no obvious repercussions or motive to lie, stuck to the line that he was entirely innocent and unaware of his relative’s anti-governmental activities. Actually the tyrant Jaafar Muhammad an-Nimeiry was to be displaced a couple of years later though he subsequently returned to power and was only finally ousted in 1985.

The artist is pretty disparaging about the historic disinterest in the arts within Sudan, and has spoken of how, at one point when he was trying to set up a Department of Culture, he asked for a budget of Ł20 to buy a bike but got only 10% of that, on a pro rata basis, or enough to buy a bicycle pump.

He has taken an active interest in democratic moves to end oppressive regimes within the Middle East and North Africa, and in particular in the so-called ‘Arab spring’ that lasted from 2010 to 2012 and resulted in over 60,000 deaths though it achieved little because of the violent reactions from the governments involved (Syria being a case in point). Endearingly El-Salahi blamed a bad influenza on not joining in the riots, though he was then 80 and could be excused front-line service!

Since 1998 he has lived and worked in Oxford, England.

What Does the Artist Say About ‘The Inevitable’?

He speaks of each panel of the work as being akin to what we’d think of as a fractal, so even in isolation it represents the whole. He speaks of never knowing, when he starts a piece, what it will turn into as might a conventional European artist. He explains the concepts in terms of embryos that grow and speaks of particles which interact with each other. He mentions that it took him a decade to work ‘The Inevitable’ up into the piece he’d conceived in prison. And he’s quite disparaging about art appreciation and labels that have been stuck on him and his work. For example he resents being tagged as being of the so-called ‘School of Khartoum’ when he was only involved with that from 1959 to 1962, which means that in a career stretching for 70 years it was almost a footnote. Indeed he once said “I find that I’m a role model for something that I never asked for at all. I get people coming into the studio and writing papers and so on”. But he reserves his most scathing criticism for the Sudanese Government because it’s neglected the arts, though he feels that there are increasingly opportunities for youngsters to train in them (especially as graphic artists preparing for digital careers), that there are more galleries and exhibitions, and that the outside world – including other nations – has helped in that respect.

Importantly, perhaps, when asked if art could change political or social structure he answered: “I believe in the fact that the message from the artist to the public is to let them think and develop their own idea about the work”. So this is not proselytising. He is not preaching. ‘The Inevitable’ is not ostensibly propaganda.

In summary here is an impactful piece that is readily associated with a long-time-coming knee-jerk reaction to oppression and the infringement of human rights. Given the artist’s comments it would be wrong to be too prescriptive about how it should be viewed or appreciated. But in a sense it demonstrates a triumph for the human spirit that such art can be conceived within such straitened circumstances.

It is possible to affordably buy unframed prints of work by El-Salahi. He is also famous for ‘Reborn Sounds of Childhood Dreams I’ and ‘They Always Appear’. Or you can shop for originals. See www.artsy.net/artist/ibrahim-el-salahi.