Hokusai Katsushika’s limited-colour woodblock print ‘The Great Wave Off Kanaguwa’ (also known as ‘Under the Wave Off Kanaguwa’ and ‘Thirty-Six Views of Mount Fuji - The Great Wave’ as well as ‘The Great Wave’ and simply ‘The Wave’) is an iconic masterpiece, one of the most famous works ever executed, an impressionist tour-de-force that conveys the menace of a claw-like rogue wave near modern-day Yokohama in Sagami Bay and with Mount Fuji some 50 miles away in the background. Its subject, and the peril to which the three oshiokuri-bune crews are subjected, renders it timeless. Indeed the peak of the mountain is associated with eternal life and that surely contrasts starkly with the life-expectancy of fishermen such as these.

As a prolific ‘ukiyo-e’ artist who created ‘pictures of the floating world’, and this was a school that dominated Japanese art from the 17th to the 19th centuries, Hokusai (1760 - 1849) was known for illustrating objects from everyday life. So his 30,000 creations spanned fish and birds as well as other animals, craftsmen, courtesans and concubines (his mother seems to have been the latter), VIPs and performers, bridges and landscapes. But he loved his seascapes and painted other monster waves in locations such as Kajikazawa and Chōshi. 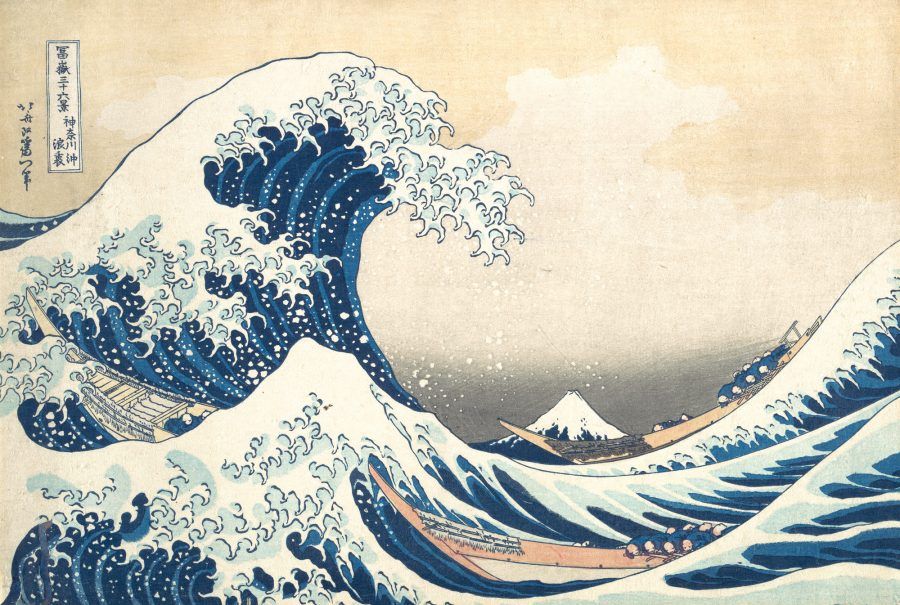 In summary Hokusai was a great artist though his genius was not simply in his compositional ability but in mass-producing and marketing his work. Rather than creating individual pieces to hang uniquely in palaces he catered for a mass-market and was thus able to decorate homes all over Japan. Yet he could never have known that, shortly after his demise, his work would go on to penetrate a global market and influence scores of artists, nor that ‘The Great Wave Off Kanaguwa’ would be instantly recognisable for billions of people around the planet centuries later. This article explains why that is deservedly so.

Born Tokitarō in 1760, Hokusai Katsushika (normally just referred to as Hokusai) started to paint at six and was widely known by the time he was 60 (in part that’s amazing given that he assumed at least 30 different identities). He was still painting at 88 when he died though he had intended to make 110 and always reckoned, perhaps tongue-in-cheek, that he’d be good in another 5 years.

Apparently his father distanced himself from Hokusai because the lad’s mother was probably a concubine. But an uncle adopted him and got him a start with his business in the imperial palace as a mirror-polisher. But Hokusai was understandably not really interested in the work (he may have seen the writing on the wall and realised that metal mirrors were being replaced by their glass counterparts from the Netherlands anyway) and moved to the library as a clerk.

He then trained as a carver and mastered woodblocks used for printing but he likewise became an accomplished copper engraver. Early on he worked under the name Tawaraya Sōri from the Tawaraya School. But later on he passed that name to a pupil and became Hokusai Tomisa.

It is worth relating that Hokusai was a bit of a performance artist. He was asked to demonstrate his artistic skills later to courtiers and famously daubed paper with a thick blue line then dipped a chicken’s feet in red paint and chased it along the line. The effect was to mimic maple-leaves on water. He also painted a huge picture of a Buddhist monk using a broom as a paintbrush (see below, centre). And he created a three-storey-high work celebrating the founder of Zen Buddhism.

What you should understand is that such self-promotion came naturally to him because Hokusai was commercially astute. He had a great sense of line and an ability to understand how the entire spectrum that he saw could be rationalised into the four colours (i.e. the white paper with blue, black and green) usually employed in woodblock printing. But then he utilised what must have been a big studio to carve the different woodblocks required for each colour, then print, dry and market his work.

They were quite possibly making the paper too. And organising the distribution. This required logistics.

Hokusai wasn’t just using these processes to create decorative art. He was a one-man whirlwind who designed board-games, instructional manuals, paper-lanterns and cut-out dioramas (which are three-dimensional scenes). Apparently this perpetual creativity created a degree of chaos and Hokusai would simply look around himself, decide that his studio was a pigsty, and move somewhere else rather than begin to tidy it up. Thus he moved studio scores of times.

We cannot be sure of what Hokusai created during his career, though his work was designed to be printed - usually in just three colours on white – and sold well in Japan. That uncertainty is because in 1939, a decade before his death, much of his portfolio was destroyed in a calamitous fire. But thankfully he continued to be productive to the end. Much was salvaged anyway. And four years after Hokusai’s death the American admiral, Commodore Perry used gunboats to break Japan’s 214-year-long self-isolation (or ‘sakoku’). After that Hokusai’s prints were not only widely sold in Europe but used as wrapping-paper (the nudes that might offend European tastes usually ended up like that). 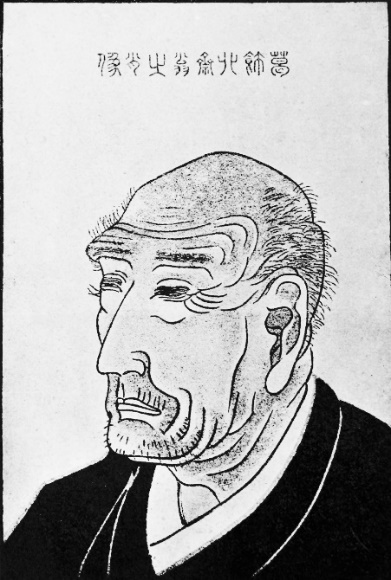 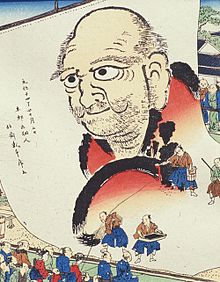 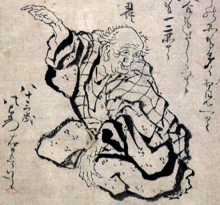 Above: Some of Hokusai’s Self-Portraits. One cannot accuse him of vanity!

The Process and the Colours

Setting aside the skills required to carve different woodblocks that map onto each other, even the printing was a specialised job and done by hand. No two prints would be the same because the printers would use tints of each colour, with some dilution, and might well hand-finish the skies with a wash.

You can see this if you examine several copies of ‘The Great Wave Off Kanaguwa’. The darker and pale blues may differ a little, as does the olive green / mustard / beige. And the skies too.

All this took time and application. But mass-production could cover the costs. So ‘The Great Wave Off Kanaguwa’ may well have had a print-run of 10,000 (which explains why quite a few collections sport originals!)

One of the colours used so effectively was the so-called Prussian blue. Hokusai had got this via China (remember the lockdown) though it seems to have perhaps come from England and yet was the creation of Swiss and German scientists (hence the name). Hokusai’s use of that vibrant colour was to be a huge influence on other artists, as we’ll see, but in particular Vincent van Gogh and his art-dealer brother Theo who were avid collectors of Japanese prints including work by Hokusai.

What else can we say about ‘The Great Wave Off Kanaguwa’? Well it represents a love and mastery of balance and harmony that is akin to what we so often see in Japanese gardens, architecture and interior design. It is simplistic, which reflects a Japanese trait. It creates a subliminal link between firstly the fluid and frothy ephemeral crest of the wave and secondly the permanence and solidity of Mount Fuji in the background. Topographically they are similar. The scene reminds us of the fragility of life and of society’s reliance on bravery. The streamlined oshiokuri-bune, fast fishing-boats, are ingenious solutions but look extremely fragile next to towering waves that (remembering one’s physics) weigh a ton for each cubic metre. The boats that Hokusai depicts are traditionally built to be 12 to 15 metres (39 to 49 feet) long. And we know that the artist exaggerated the vertical scale by 30%. But that means the wave is between 10 and 12 metres (33 to 39 feet) tall (about three storeys). And one can see the faces of the crews underneath. They aren’t comfortable! This precise detail, considering that the printers were using just three colours albeit with tints achieved by dilution, is amazing considering the restraints of their materials.

Who Did Hokusai Influence with Works Like ‘The Great Wave’?

Of course this piece was all about line, harmony, a concept. In this it was impressionistic, forsaking detail, and thus was bound to influence European exponents of impressionist art when they saw it. Van Gogh has already been mentioned but Degas, Gauguin, Lautrec and Monet are all likewise known to have been influenced by Hokusai, as were the Art Nouveau masters Klimt, Lalique and Mucha.

In summary Hokusai had a matchless feel for form and colour that he translated into eminently-affordable timeless Oriental masterpieces that are so demonstrably timeless that even today they still sit well in modern surroundings.

It is possible to purchase prints of ‘The Great Wave Off Kanaguwa’ through suppliers such as www.allposters.co.uk.