Francisco Goya (1746 – 1828) Born Francisco José de Goya y Lucientes, Francisco Goya was a Spanish painter and printmaker. His larger-than-life character seemed to fit him to being a romanticist. In that guise he had a long and successful career during the late 18th and early 19

Born Francisco José de Goya y Lucientes, Francisco Goya was a Spanish painter and printmaker. His larger-than-life character seemed to fit him to being a romanticist. In that guise he had a long and successful career during the late 18th and early 19th centuries, and indeed he is famous for documenting the politics and conflicts occurring during the era in which he lived. Operating before Daguerre invented the first camera in 1836, the artist’s depictions brought contemporary events to life for the masses in a way that words couldn’t. For that reason alone he is widely regarded as having been the most influential Spanish artist of this period. Goya was also considered to work in the ‘rococo’ style, which is late baroque (think of Caravaggio and Rubens) and tends to be associated with asymmetrical patters with scrollwork and motifs. Like the Frenchman Delacroix, he had a claim to be the last of the ‘Old Masters’ (ordinarily deemed to be those painters who worked in Europe before 1800) though (since Delacroix’s career ran half a century later) that’s a matter of opinion. But what is indisputable is that Goya was one of the best portrait-painters of his time. That’s not bad for somebody who was initially rejected from art school! 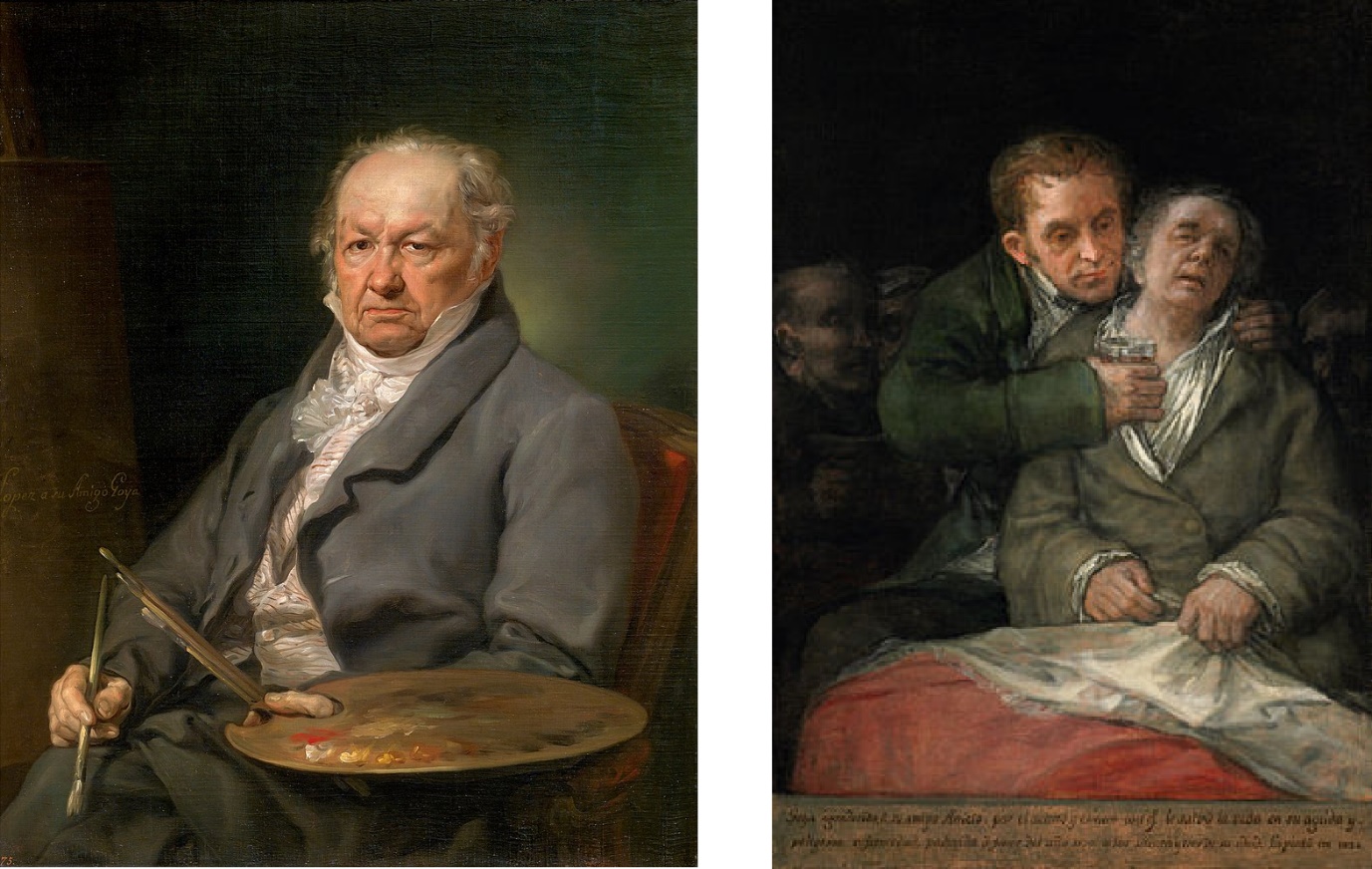 Left: Goya as he was depicted in 1826 (2 years before his death) by fellow artist Vicente López Portańa. Right: ‘Self-portrait with Dr Arrieta’ (1820) in which he is being pressed to take medicine.

Goya came from Aragon, which is just south of the Pyrenees and therefore Spain’s border with France. His parents were José Benito de Goya y Franque (who was a gilder, so he was a craftsman who worked with precious metals) and Gracia de Lucientes y Salvador, and theirs was a lower-middle-class family though the little house in rural Fuendetodos where the young Goya was initially raised rather pretentiously bore a coat-of-arms that was from his mum’s family. At the age of three the family moved to a home they’d bought in the city of Zaragoza. By that time there were six children (Francisco had been the fourth) so they probably had to move. Luckily he got free schooling, one assumes on merit, at the Escuelas Pías de San Antón. 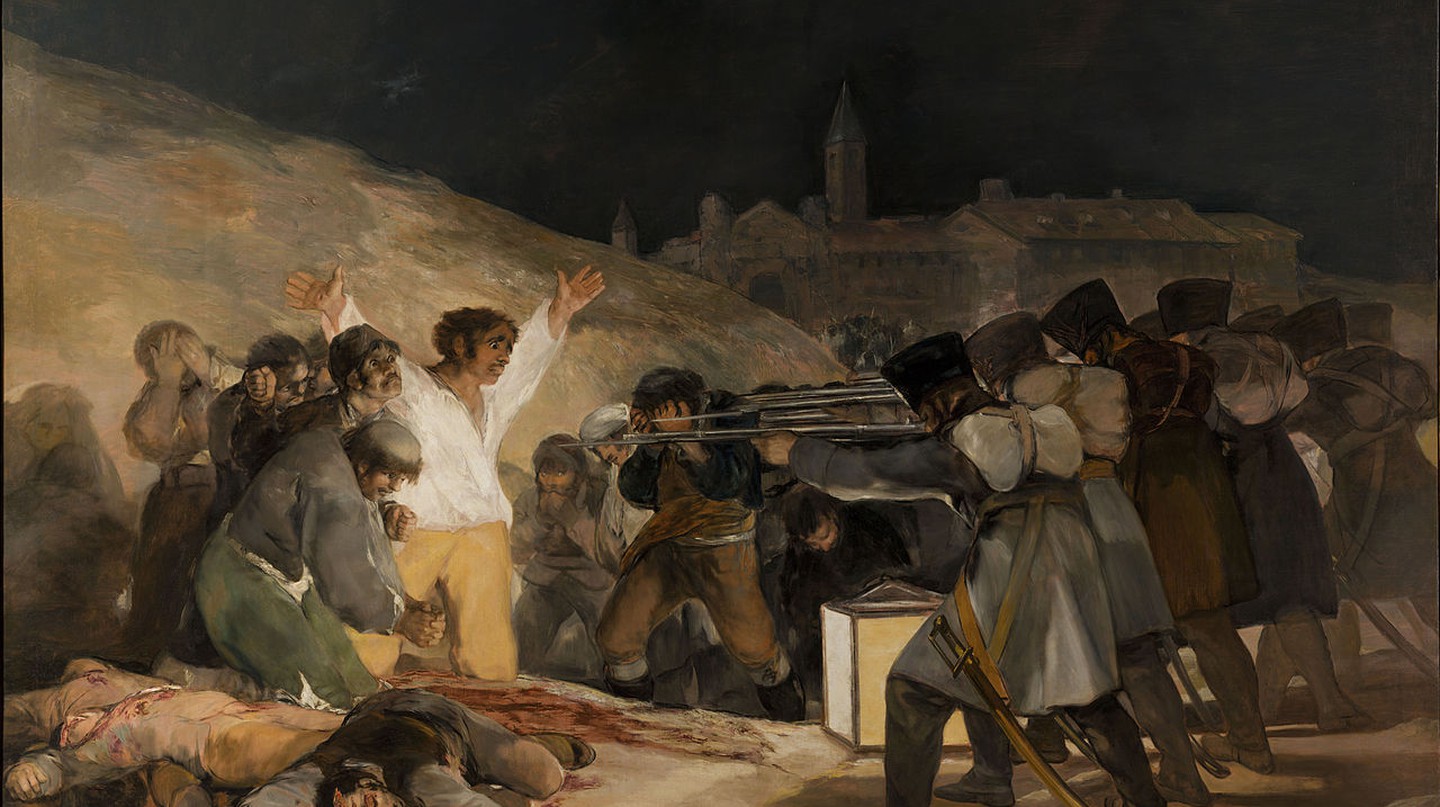 Goya’s ‘The Third of May 1808’ is perhaps his most famous work. It depicts the execution of Spanish patriots in Madrid who had defied Napoleon Bonaparte during the Peninsula War. The subject was revolutionary. But the artist’s execution was, in itself, entirely unprecedented.

He studied painting from age 14 under José Luzán y Martinez, a prestigious baroque painter who was also the son of a gilder (it’s a small world), who’d studied in Naples and who was to work for Philip V of Spain. He briefly directed the Academy of Painting and Sculpture in Zaragoza. But Goya apparently quit after being left copying stamps for four years.

Goya then relocated to Madrid where he was taught by Anton Raphael Mengs, a German painter (his big and little sisters were also painters; their dad was a Danish painter though the little sister was the only one who was legitimate) who worked in Dresden, Rome, London and Madrid. Mengs was a rococo artist whose patron was the Elector of Saxony (Saxony was located within what is modern Germany and Poland, but really disappeared at the end of the Holy Roman Empire in 1806), though Mengs is credited with moving art towards neoclassicism.

Goya submitted work to the art-school Real Academia de Bellas Artes de San Fernando in both 1763 and 1766 but, on both occasions, it was rejected. He got in later though. He married Josefa Bayeu; she was the sister of the artist Francisco Bayeu (also from Aragon) and he was already a member. Sometimes it comes down to who you know! In any event five years after that second rejection he won second prize in a competition in Parma.

It is worth mentioning that Goya was certainly influenced by both Marcantonio Raimondi (an Italian engraver) and his fellow Spaniard Velázquez because he copied the work of both men.

Francisco Goya certainly lived an eventful life. It is difficult to ascertain the truth of his exploits but he’s credited by some with running off to Rome with some bullfighters, trying to elope with a beautiful nun after he developed a crush on her, an affair with the Duchess of Alba and working as an acrobat. 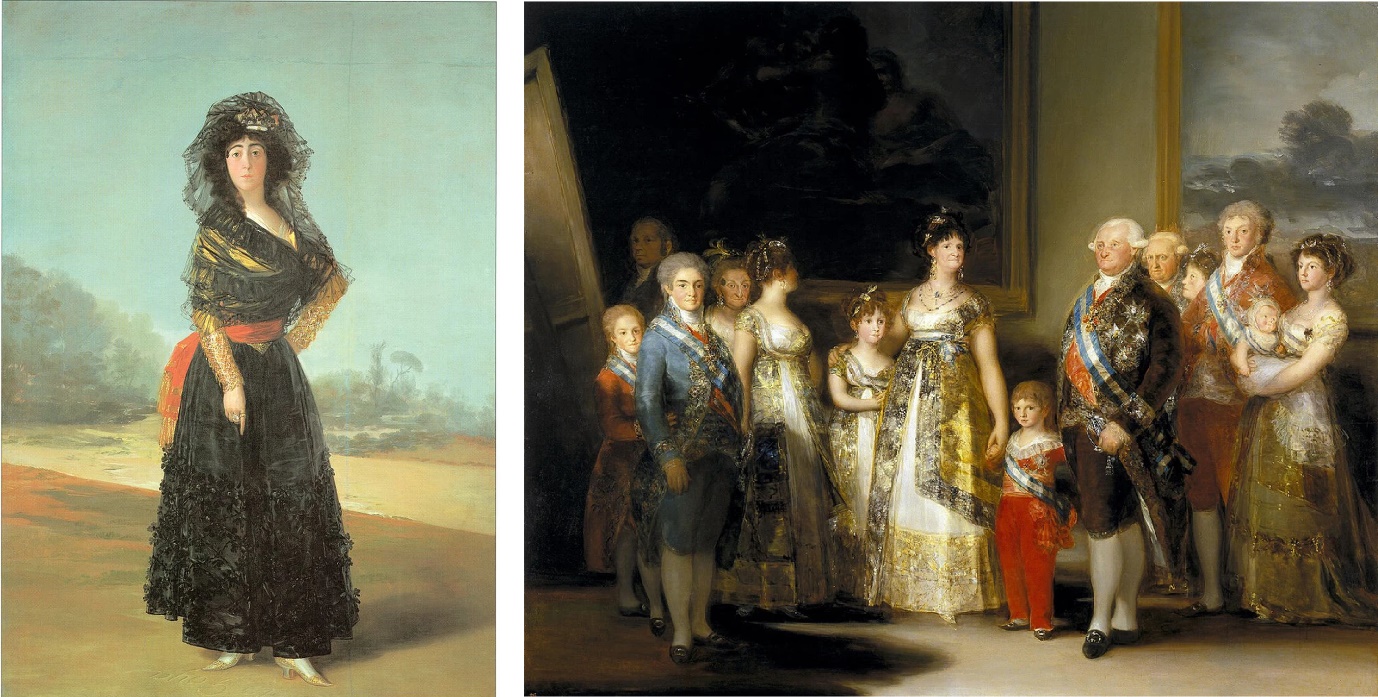 Left: Goya’s ‘The Duchess of Alba’ (1797) depicts one woman with whom he was thought to have had an affair. Right: ‘The Family of Carlos (Charles) IV’ (1800) puts the king to one side and his wife María Luisa of Parma in the centre, suggesting that it was she who wore the trousers.

The artist’s nevertheless-long life was blighted by ill-health. He had, in his early 40s, an undiagnosed illness that affected his hearing, balance and more. This may have been caused by lead-poisoning attributable to the white paint he used. Later on he had stokes and, essentially, was probably suffering from paranoid dementia. He was certainly afraid of death and, as a consequence of all this, much of his output became quite disturbing.

Left: Goya’s ‘Saturn Devouring His Son’ (in which Saturn eats the child to prevent a prophecy that a son would be his downfall from coming true). Right: ‘The Great He-Goat’ (depicting a satanic witches’ coven). Both of these so-called ‘black paintings’ were executed in the period 1820 to 1823 when, frankly, the artist was mentally ill.

Goya’s early patrons notably included the Duke and Duchess of Osuna for whom he painted portraits, groups, landscapes and more. He was active during the reigns of Charles III, Charles IV, Ferdinand VII and Joseph I (Napoleon’s brother) who interrupted Ferdinand’s reign. But he only became a court painter at 43 in 1789 (when Charles IV was on the throne). And, actually, the fact that Goya had painted for Joseph blotted his copybook a little as far as the restored-to-power Ferdinand was concerned. He painted many other royals, though, including the Infante Don Luis (the king’s brother) and Charles III.

Although he was restricted to working on a smaller scale later in life after his strokes, Goya developed quite a reputation early in his career for his work on large-scale tapestries. He executed a lot of portraits and family groups, religious paintings of course, even the odd nude (very daring at the time) and allegories as well as disturbing cartoons. 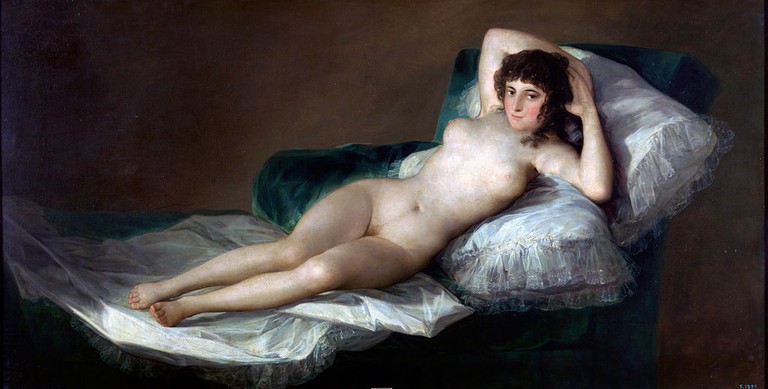 Goya’s ‘The Naked Maja’ (date unknown but late 18th century) was commissioned by the hated Prime Minister Manuel de Godoy and featured his mistress Pepita Tudó. It was later confiscated by the Spanish Inquisition and, until the artist convinced investigators that this sort of nude had been painted by others before, Goya was in big trouble.

In summary Goya was an interstitial artist, one who spans the gap between the world of the old masters and those responsible for modern art (which started in the 1860s). You can easily and affordably buy unframed Goya prints. Try www.redbubble.com/shop/francisco+goya+prints for example.

Goya was a fine printmaker too, and produced scores of aquatint etchings. These have a design cut in a way to produce tones without lines. Left: ‘Here Comes the Bogey-Man’ (1797 – 1799) shows a woman deliberately having the traditional Spanish clown Coco scare her kids. Oh the fun of it! Right: ‘Unhappy Mother!’ (1810 – 1820) which is one of the expansive ‘Disasters of War’ series depicting the incidents, atrocities and misery Goya had often personally observed.