Frame Academy V One of the problems with picture-frames is that we never tend to buy enough of them. I?ll give you an example. We?ll buy a set to house photographs of everyone in the family. And then, damn it, somebody will go and get married or have a kid. And then

Login
Help
Contact How To Videos Measuring Advice Delivery/Dispatch Discounts Refund/Damage What's Included Who We Are Blog Bedford Showroom
CORONAVIRUS UPDATE - We are fully operational and not experiencing any delays.
Free Delivery Over £50 * Most UK Addresses  |  Order Today for Dispatch On or Before Monday 1 June

In ?Frame Academy I? we provided a run-down of essential terminology as a prelude to further ?Frame Academy? pieces that are spanning more complex aspects of the dark art of picture-framing. In ?Frame Academy II? we gave you a step-by-step idiot?s guide to making a picture frame. It served, alternatively, as a resource to help you understand the processes involved if you go to a 3rd party to have your frames made to your specifications. In ?Frame Academy III? we ambitiously explained how to gild a frame and add an ostentatious touch to framed work that is already precious to you. In ?Frame Academy IV? we retraced our steps a little and asked ?Why would anybody bother with a frame?? And ?With so many options to choose from, what sort of framing solution should I be looking for?? Now, in ?Frame Academy V?, we examine interesting things to do with old picture-frames.

Where to Get Old Frames

One of the problems with picture-frames is that we never tend to buy enough of them. I?ll give you an example. We?ll buy a set to house photographs of everyone in the family. And then, damn it, somebody will go and get married or have a kid. And then we?re left in a quandary (especially those of us with OCD and who realise that whoever supplied our frames is unlikely to have any of the same in stock any more). The same might be true of framed qualifications, for example. You may have two or three that have sat on the wall for decades. And then, in your twilight years, you go and earn another piece of paper to prove to young upstarts in the family that you haven?t lost your marbles. The problem is that the old frames are impossible to match. Even if you could get something similar it won?t be aged or distressed. So as a set they?ll look mismatched. Of course it?s still entirely possible that you have a few old frames with nothing in them that are collecting dust. Alternatively you may find odd items, like a framed photo of an old boyfriend that your wife has inexplicably been hoarding for years, which she?d surely never miss.

You might read this as an incentive to buy more than you need. And I couldn?t possibly comment. But it does make sense to plan ahead and have frames to spare. Having said that, what this proves is that the dynamic nature of life and what happens to us, as well as those around us, provides opportunities to reframe what we have. (And squirrel away spares in the process).

But that all begs the question ?What should I do with the old ones?? Well ponder that no longer!

Most of the examples illustrating this article are pretty easy to replicate and might be projects that you could even put the kids on when they complain during holidays that they have nothing to do. They?re functional because they?re essentially useful. They?re frugal because they are cheaper than mass-manufactured alternatives. And they?re fun too. When I say ?fun?, I reckon that every opportunity for us to create something personalised that doesn?t look too shabby is an opportunity to have fun.

But the Internet is awash with ideas like these. A couple of my favourites are below. I particularly love the papier-m?ch? animal-heads (see below-right). But not every idea will take an age to execute. Witness the idea (see below-left) to couple a little boy (whose name begins with an ?M?, apparently) and his love of toy cars. In contrast it?s super yet simple.

Frankly much of the ingenuity is incredible. See the examples below. On the left some proud parents have found a way to put on perpetual display some of the most important ephemera associated with their offspring. In the middle a couple have found a great way to encapsulate frames within frames so that any onlooker would blink and wonder how they?d achieved that. And, on the right, and this is my favourite, somebody has worked out how to turn frames into an indoor climbing-wall for their dolls. This would be easy to do with stuffed animals like teddies too. And I would have been tempted to add a rope, harnesses and more. 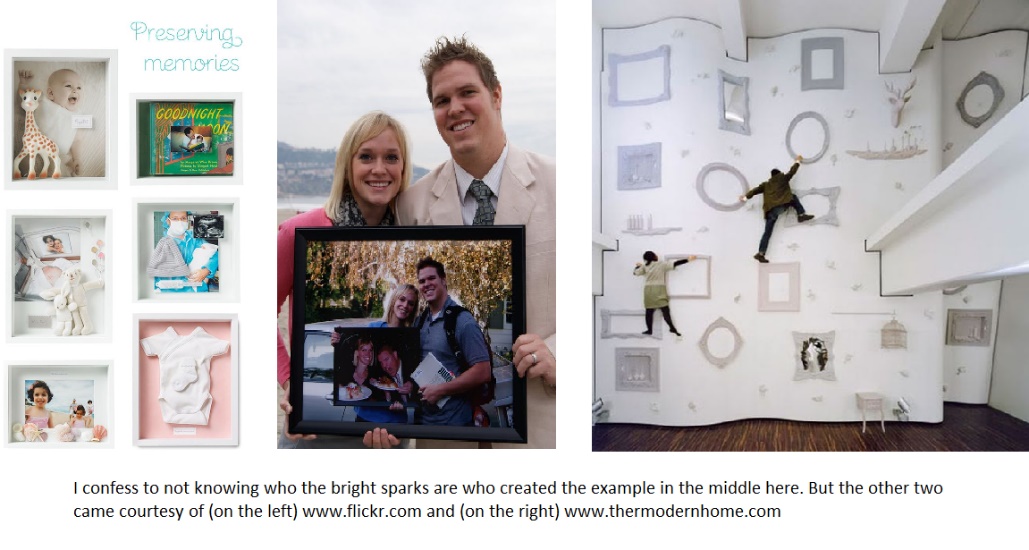 Fill entire walls with decorative conversation-pieces that cost virtually nothing

Not only do the frames have a negligible cost. But what goes into them can be free. Or close to it. Witness the examples below which utilise shopping-bags, stones and buttons.

Don?t just repurpose those old frames. Refurbish them too, as part of the process

The Interweb seems to be an absolute treasure-trove of ideas, and many of them can be copied, adapted and improved-upon. One website worth visiting is www.property24.com/articles/10-creative-uses-for-picture-frames/18126 where there is some great advice on how to refurbish old frames as well as to repurpose them. That site even suggests that old frames are used to hold air-plants and succulents. It doesn?t have any illustrations but those below may give you an idea.

It seems a terrible waste to throw away old frames. Yet almost all of us have some. And very often the only reason why we have them is because we?ve bought replacements as the items we wish to exhibit have expanded. So why not have a go at using the old ones before you chuck them away? Yet all of these ideas are economic. And you can quickly execute them yourselves. Meanwhile if you are reframing something precious it?s always worth going straight to a professional framer like EasyFrame for advice. You could have them either do the entire job or help with part of it (whatever has left you jittery!) EasyFrame can also certainly supply much of what you need to do the job if you contact them. EasyFrame is on 01234 856 501 and emailable via sales@easyframe.co.uk.