Monet, Monet, Monet; Always Sunny This article is about the French painter Claude Monet, the founding-father of the 'impressionist' movement and whose hazily-executed work 'Soleil Levant' (or 'Impression, Sunrise'), originally exhibited in 1874, is acknowledged to be the painting tha 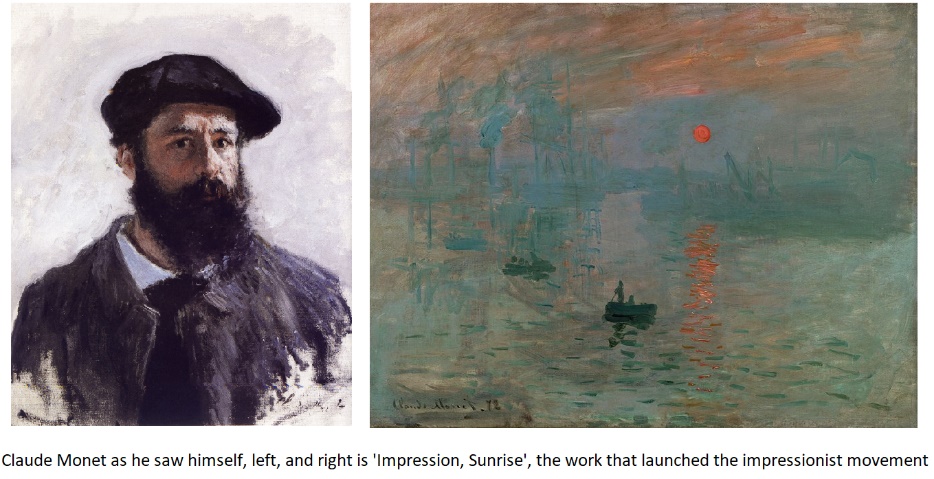 Framing A Master - What This Article is About

This article is about the French painter Claude Monet, the founding-father of the 'impressionist' movement and whose hazily-executed work 'Soleil Levant' (or 'Impression, Sunrise'), originally exhibited in 1874, is acknowledged to be the painting that first expressed the outcome when an artist tried to record his perceptions rather than accurately, and perhaps clinically, depict his exact observations.

'Impression, Sunrise', which was actually one of six paintings of Le Havre that Monet executed then, is widely credited with having marked an inspirational leap forward. We could contend this because between 1400 and 1600 the Renaissance had seen artists learn to interpret what they saw through the prism of science. Research into fields as disparate as anatomy and chromatography had enabled painters to realistically depict what they saw with almost-photographic accuracy though actually the camera, invented half a century earlier, was arguably now making realistic painting redundant. But impressionism was to mark a shift in technique that might be explained as mirroring another science Ė that of psychoanalysis Ė which was soon to make waves in late 19th-century Vienna. So what Monet did was depict the impact which sunrise, and later other dimensions of the natural and manufactured world, had on his psyche. Not everybody liked this new genre. One critic of the original work wrote a scathing article criticising Monet's lack of detail and entitled it 'The Exhibition of the Impressionists'. The name was intended to be derogatory, but the movement latched onto it.

He was born in Paris in 1840 to a father who was a grocer and a mother (on her second marriage as a widow) who did some singing to make ends meet. The family were relatively poor. In 1845 they moved to Le Havre when Monet senior and his brother set up a business provisioning ships. By then Monet junior was said, even at the age of 5, to be filling his schoolbooks with caricatures of teachers instead of schoolwork. Understandably his father was unapproving of the art (which was perhaps because art was largely taken up by those in wealthy families that could financially support them; young Monet was a bit of an exception) and wanted his son to be in victuals too. At this point it is worth saying that as an adult Monet the artist was often impoverished but was said to have deliberately destroyed paintings rather than let creditors seize them in lieu of what he owed.

Monet's mum Louise Justine Aubrťe Monet, however, was his greatest fan. Yet she died when her son was 17 and young Monet Ė doubtless seen as a liability to his father Ė was sent off to live with an aunt. Doubtless trying to avoid being a liability to that aunt, at 19 Monet voluntarily signed up for seven years' military service. Yet during the second year in the ranks he contracted typhoid. His aunt pleaded for her nephew's release and, incredibly, he was granted that on the proviso that he attended a reputable art school. (It is perhaps worth mentioning that, in this era, the French were involved in several wars to protect their global interests; it was fighting battles in its African colonies, it was involved in the 2nd Opium War, it was pursuing the Cochinchina campaign in Vietnam, it was fighting the Franco-Austrian war, it was a party to the Taiping Rebellion, then there was the French intervention in Mexico and Far East campaigns in Japan and Korea. Monet actually served in Algeria. So, ironically, getting typhoid so he could be discharged on medical grounds was quite possibly a lifesaver!)

Monet was taught from the age of 18 by EugŤne Louis Boudin (1824 to 1898), a Le Havre artist whose father was a local harbour pilot and who therefore had significant maritime training of his own. Boudin had seen a show of Monet's caricatures in a local frame-shop, but soon convinced the lad to focus on more serious applications of his talent for observation. Boudin, 16 years older, was one of the first French landscape painters who worked outdoors, often along the seashore. And he was good; a well-respected contemporary, Jean-Baptiste-Camille Corot, dubbed Boudin, who travelled extensively in Europe and won some prestigious awards in his own right, 'King of the Skies'. Boudin and Monet were to remain friends for a lifetime.

The second big influence was (Marc Gabriel) Charles Gleyre (1806 to 1874), a highly-regarded Swiss artist who'd been a French resident since his youth and who ran what had been Paul Delaroche's studio (the latter had been a painter of historical scenes from French and English history, and was probably the top teacher in Paris). Charles Gleyre, who was considered to be rather experimental, tutored Whistler, Sisley and Renoir as well as Monet together with other prominent budding artists. Famously he charged his students nothing though he liked them to chip in.

Working at …cole Nationale Supťrieure des Beaux-Arts, the free Acadťmie Suisse in Paris, and the Brasserie des Martyrs, Monet was further influenced by other luminaries including (Jean Dťsirť) Gustave Courbet (1819Ė1877) who was a 'realist' and painted only what he could see. (Contrast that with Monet's creation of a genre that painted an often-vague impression.) Monet was to move home several times to be close to what he wanted to paint, famously living at Argenteuil (North-West Paris) and Giverny (in what we know as Normandy). But he loved to paint in London too, especially the Houses of Parliament.

It should be added that Monet apparently disliked contemporary work that was regarded as modern art. Maybe that explains his drive, though clearly, he shared his vision with others who became a movement, to generate a whole new genre.

The Artist's Technique in His Own Words

Whatever did Monet think he was doing? It can perhaps be best explained by the man himself. He said ďTry to forget what objects you have before you - a tree, a house, a field, or whatever. Merely think 'Here is a little square of blue, here an oblong of pink, here a streak of yellow' and paint it just as it looks to you, the exact colour and shape, until it gives you your own impression of the scene before youď.

Despite what many might consider to be a spiritual element to Monet's work, he became progressively more atheist. This may well have been understandable given the early demise of his mother (whose first husband had died young) let alone the loss of his first wife Camille Doncieux at 32 with TB and uterine cancer after 9 years of marriage during which she'd borne him two sons, Michel and Jean. He then married the well-to-do Alice Raingo Hoschedť* (who was on her third marriage and came with six sons) who died in 1911, some 15 years before the artist. And, at one point, Monet attempted suicide by drowning to avoid creditors. It could be assumed that he felt it was a cruel fate for him to suffer so badly with cataracts in his later years too. All this could easily have eroded his faith and negated his Catholic upbringing.

*Incidentally one should realise that Blanche Hoschedť Monet was Alice's daughter and both Monet's step-daughter and daughter-in-law. Confused? They were linked via a s 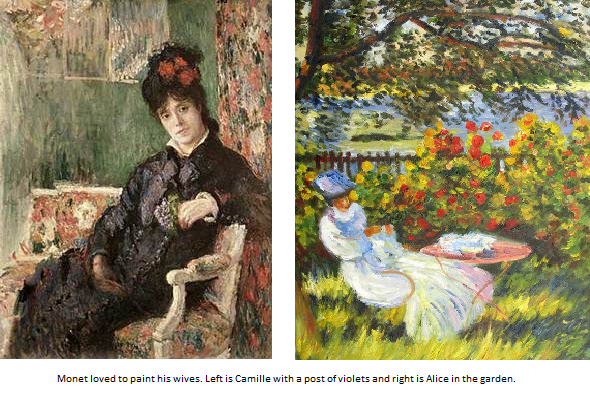 In summary Claude Monet irrevocably changed the world as we see it, as we perceive it. Arguably the world he captured for posterity wasn't always sunny (I apologise to readers and ABBA for the title) but he worked tirelessly to paint light (saying ďI wear myself out and struggle with the sun. And what a sun here! It would be necessary to paint here with gold and gemstones. It is wonderfulĒ. Nobody is expecting you to buy an original. A record for a Monet was set in 2018 at Christie's when 'Nympheas en Fleur' ('Water Lilies in Bloom') sold for .6 million. Not to be outdone, Sotheby's sold the 'Meules' ('Haystacks') series for 0.7 million in 2019. (Monet, often on his uppers, would have doubtless been bemused by these prices.) But fine prints are available. One excellent place to purchase unframed prints is at www.amazon.co.uk/slp/monet-prints/q6qsv64ehkax4ef.