Don’t Poo-Poo Chris Ofili’s Masterpieces This article is about Chris Ofili, a controversial British painter of Afro-Caribbean heritage who in 1998 was the first black winner of the Turner Prize with his painting ‘Orgena’ (this was also the first painting to have won the prize since 1985) af 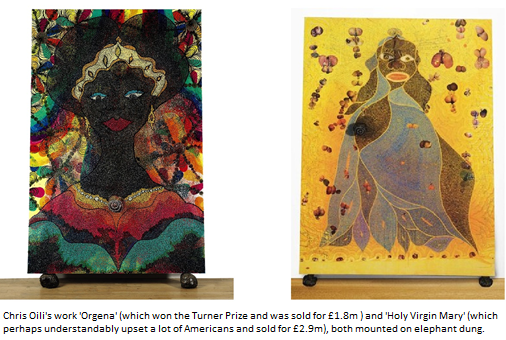 This article is about Chris Ofili, a controversial British painter of Afro-Caribbean heritage who in 1998 was the first black winner of the Turner Prize with his painting ‘Orgena’ (this was also the first painting to have won the prize since 1985) after rising to prominence as one of the Young British Artists group – though his work is certainly distinctly different from that of his contemporaries. He’s been branded a ‘punk artist’ because of his liberal and avant-garde use of cuttings from pornographic magazines, glitter and elephant dung – as well as his references to sex organs in works such as ‘Holy Virgin Mary’. Yet he’s been on the Tate’s board of trustees and in 2017 was awarded a CBE for his services to art. So, in a sense, he’s become an establishment figure against all the odds and despite his self-evident willingness to shock the public. (He doesn’t stop with the public; one should mention that he shocked the Royal Academy by refusing membership since he reckoned the honour was effectively worthless if it didn’t come with a free parking-slot.)

Chris Ofili was born in Manchester 3 years after his parents arrived in Britain but his Nigerian dad abandoned his wife and 4 children (to go and set up a new home and family back in Nigeria) when Chris, the 2nd eldest, was 11. His parents were certainly not privileged since they both worked for McVities biscuits. Nevertheless the youngster won successive places at St. Pius X High School for Boys, Xaverian College, Tameside College, Chelsea School of Art (to earn a Bachelor‘s Degree in Fine Arts), The Royal College of Art (to earn a Master‘s Degree in Fine Arts), and Berlin’s Universität der Künste (Art University). He was one of the Young British Artists (the YBAs or BritArt) who initially hailed from Goldsmiths in 1988 but then also drew students from The Royal College of Art; they included ‘shock-tactic’ artists such as Damien Hirst and Tracey Emin who often exhibited in factories and warehouses, who are credited with revitalising the British art scene, and who almost-invariably enjoyed the patronage of advertising-tycoon and art-buff Charles Saatchi. In this context, although Chris Ofili did not exhibit at the big YBA show ‘Freeze’ he did so at its successor ‘Brilliant!’ Much of his work is in oils though there are watercolours too.

Ofili’s influences are various, but he has studied cave paintings in Zimbabwe, been fascinated by so-called blaxploitation movies, taken in the Caribbean culture in Trinidad’s Port of Spain (where he now resides though he has homes in London and Brooklyn), and his bright colours and decorative work has been likened to that of Robert Colescott, Kerry James Marshall and Ellen Gallagher. It is also certainly relevant that Ofili was raised as a Catholic and used to be an altar-boy; quite a bit of his work has religious undertones. He’s always been a lover of hip-hop music (his ex-wife was in a band) and was a promising young footballer. Race and identity have obviously been important to him too, though he’s voiced his disinterest in investigating his roots - apparently feeling it’d be a pointless quest. Yet the Stephen Lawrence enquiry is cited as inspiring ‘No Woman No Cry’. 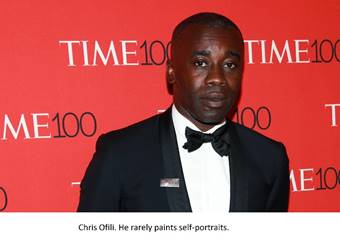 How His Poo Caused a Stink

Ofili caused international outrage in 1999 when New York’s Brooklyn Museum was about to show his work ‘Holy Virgin Mary’ (featuring a black Madonna, elephant dung and vaginas). The city’s archbishop, Cardinal John O'Connor, was outraged at what was seen to mock the virgin birth (the vaginas were deemed particularly inappropriate, and depicting cherubim and seraphim using dung made matters worse). And Donald Trump reckoned it was ‘degenerate’. But more seriously Rudy Giuliani, the New York mayor at the time, condemned it as ‘sick’, launched a lawsuit and announced ‘There’s nothing in the First Amendment that supports horrible and disgusting projects‘ (the First Amendment to the US constitution blocks any law which would interfere with the worship of any religion or the freedom of speech). Giuliani then threatened to withdraw funding - forcing closure. Ofili subsequently featured in a public list of people who were supposedly screwing up America. A direct consequence of that reaction was that Ofili felt threatened and largely withdrew from public life, preferring for the most part to remain in Trinidad where he has a gallery but a low profile.

In 2005, when Chris Ofili was one of the Tate trustees, it rather unwisely bought an installation of 13 of his framed paintings, all featuring rhesus macaque monkeys, called ‘The Upper Room’. A year later the Charities Commission pilloried the Tate for doing so, citing what should have been a painfully-obvious conflict of interest, and Ofili quit as a trustee.

In summary Chris Ofili is rather a unique individual who’s forged his own way and achieved fame and fortune without riding on anybody else’s shirttails. Recognition of this is that the Tate is currently showing his work in what is considered to be a ‘mid-career’ exhibition (see www.tate.org.uk/art/artists/chris-ofili-2543). But The Tate isn’t alone. You can also see Chris Ofili’s work at The Saatchi Collection on the King’s Road in London, at New York’s Museum of Modern Art, at San Francisco’s Museum of Modern Art, at The Los Angeles Museum of Contemporary Art, at The Walker Art Center in Minneapolis and at The Carnegie Museum of Art in Pittsburgh.

In the meantime if you wish to read quite an exhaustive (and absolutely fascinating) biography then go to http://chrisofiliprints.info/biography.php?cur=GBP. Nobody is expecting you to buy an original. But fine prints are available. One excellent place to purchase signed prints (and these are pretty certainly going to appreciate in value, so they’re probably a good investment) is at http://chrisofiliprints.info/.