Giovanni Bellini The Italian genius Giovanni Bellini was recognised, during his lifetime, as one of the greatest artists of the Renaissance and an exponent who was particularly adept at capturing natural illumination by using soft, saturated and sumptuous colours. An

The Italian genius Giovanni Bellini was recognised, during his lifetime, as one of the greatest artists of the Renaissance and an exponent who was particularly adept at capturing natural illumination by using soft, saturated and sumptuous colours. And, actually, thatĺs no mean feat to have achieved when one considers that his contemporaries included the likes of Raphael, Michelangelo, Leonardo da Vinci, Titian and Sandro Botticelli.

He lived and worked in Venice for his entire life, and that included a remarkably-long 65-year painting career, working principally in egg tempera then oils on religious subjects then landscapes, making such an impact that it is no exaggeration to say that he is one of the key reasons why Venetian art became as famous as that of Rome and Florence.

Bellini was certainly influential and had a real impact on the work of fellow artists who notably included Albrecht DŘrer whose work, at times, became virtually indistinguishable from that of his mentor. Sadly much of Giovanni Belliniĺs work was lost during a fire in the Dogeĺs palace in 1577 though, thankfully, much has still survived and he had died half a century beforehand so he was not exposed to the misery of seeing the majority of his legacy go up in flames. 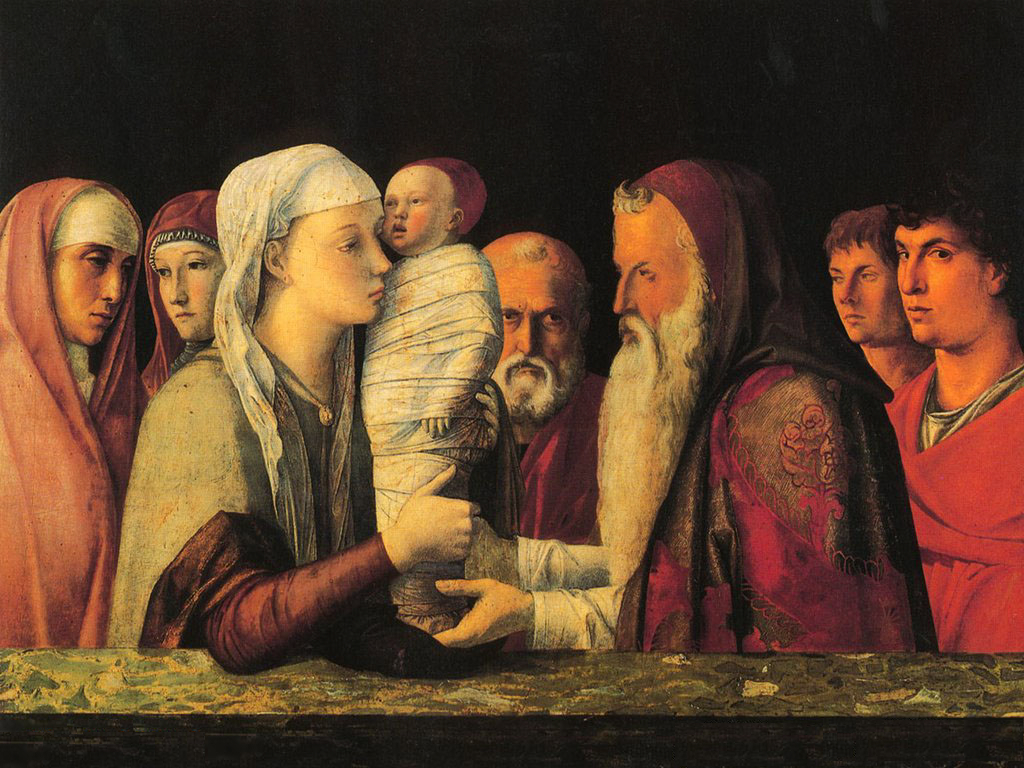 ĹPresentation at the Templeĺ by Giovanni Bellini was painted when he was about 30 and depicts the presentation of the baby Jesus by Mary and Joseph in the foreground and Simeon of Jerusalem arriving in the middle to take the child. But it may well feature the artistĺs father Jacopo as Joseph. The other figures in what has self-evidently become a bit of a crowd of extras could include the artist himself, his brother Gentile, their sister Nicolosia, their mum Anna and even their brother-in-law Mantegna. But this is speculative. Interestingly Mantegna painted something similar a few years earlier..

Bellini was initially trained, alongside his slightly-younger brother Gentile, by their father Jacopo Bellini. a highly-regarded artist in his own right and one who started them off as youngsters. And, actually, for a time it was Gentile who was considered to be the star (indeed he was still so respected that, when he was about 50, he was sent by the Venetian Senate as an emissary and cultural ambassador to work in Istanbul, as part of a peace process). He, Gentile, was renowned for his portraits as well as cityscapes. But all three would also have been influenced by - and, in turn, influence - Andrea Mantegna, who was essentially the same age as the young Bellinis as well as their sister Nicolosia whom Mantegna married to become their brother-in-law and Jacopoĺs son-in-law.

There is an alternative history that may have some credence. In it Jacopo Bellini is actually Giovanni, Gentile and Nicolosiaĺs big brother and therefore Mantegnaĺs brother-in-law. So little Francesco and Ludovicoĺs uncle not their granddad. Confused? Itĺs understandable!

At the Forefront of the Leap to Oils

Jacopo Bellini would have started his sons (or little brothers) off with egg tempera, which until around 1500 was the way in which most artists could create fast-drying and long-lasting paint (some examples are around 2,000 years old). It mixes pigments with, usually, egg yolk as a binder. But Giovanni became an early exponent of oils, the medium that would largely replace tempera (not to be confused with modern poster-paints though they can be referred to as Ĺtemperaĺ and there are similarities), because he had the good fortune to meet the Sicilian artist Antonello da Messina, a contemporary, in around 1475 when the latter visited Venice and instigated something of a revolution in respect of materials. Oil paints (usually using linseed or vegetable oil) dry faster than tempera, itĺs easier to mix colours and create tones and shades with them, those colours are not so flat, they can be built up in layers giving depth because they dry faster, and they are linked to the leap from wood panels to canvases.

Of course the fact that Bellini used oil-paints is almost of academic interest. Itĺs what he did with them which is remarkable.

By the time Giovanni Bellini painted ĹThe Agony in the Gardenĺ in 1465, at 35, heĺd moved on to use more detail. And his depiction of natural light was already noted. But this was still using tempera rather than oils, making this achievement all-the-more impressive.

Belliniĺs early adoption of oil-paints and his ability to exploit their potential seemed to propel him into the public imagination and secure work in an era when, of course, Venice was sufficiently wealthy to support patrons of the arts and thus ensure good artists were not impoverished. The Renaissance had started, itĺs argued, 30 years before Belliniĺs birth. And, when brother Gentile went off to Turkey, Giovanni became responsible for the conservation of the artworks crowding the Hall of the Great Council of the Dogeĺs Palace in Venice. Belliniĺs famous patrons were to include the fabulously-wealthy Alfonso dĺEste, Duke of Ferrara, and his older sister Isabella. But the artist was aboard a bit of a gravy-train and lived an outrageously long lifetime on benefits including an 80-ducat-a-year pension (a ducat is 3.545 grams of pure gold and, at todayĺs prices, worth around ú150).

But he never rested on his laurels. Famous for his altarpieces and depictions of mythology, he continued to set himself new challenges. Notably he broadened his subject-matter and embarked on the execution of landscapes. It is said that he was able to portray the effects of outdoor light with such accuracy that it was possible to put a notional time on his works as if they were captured by camera. 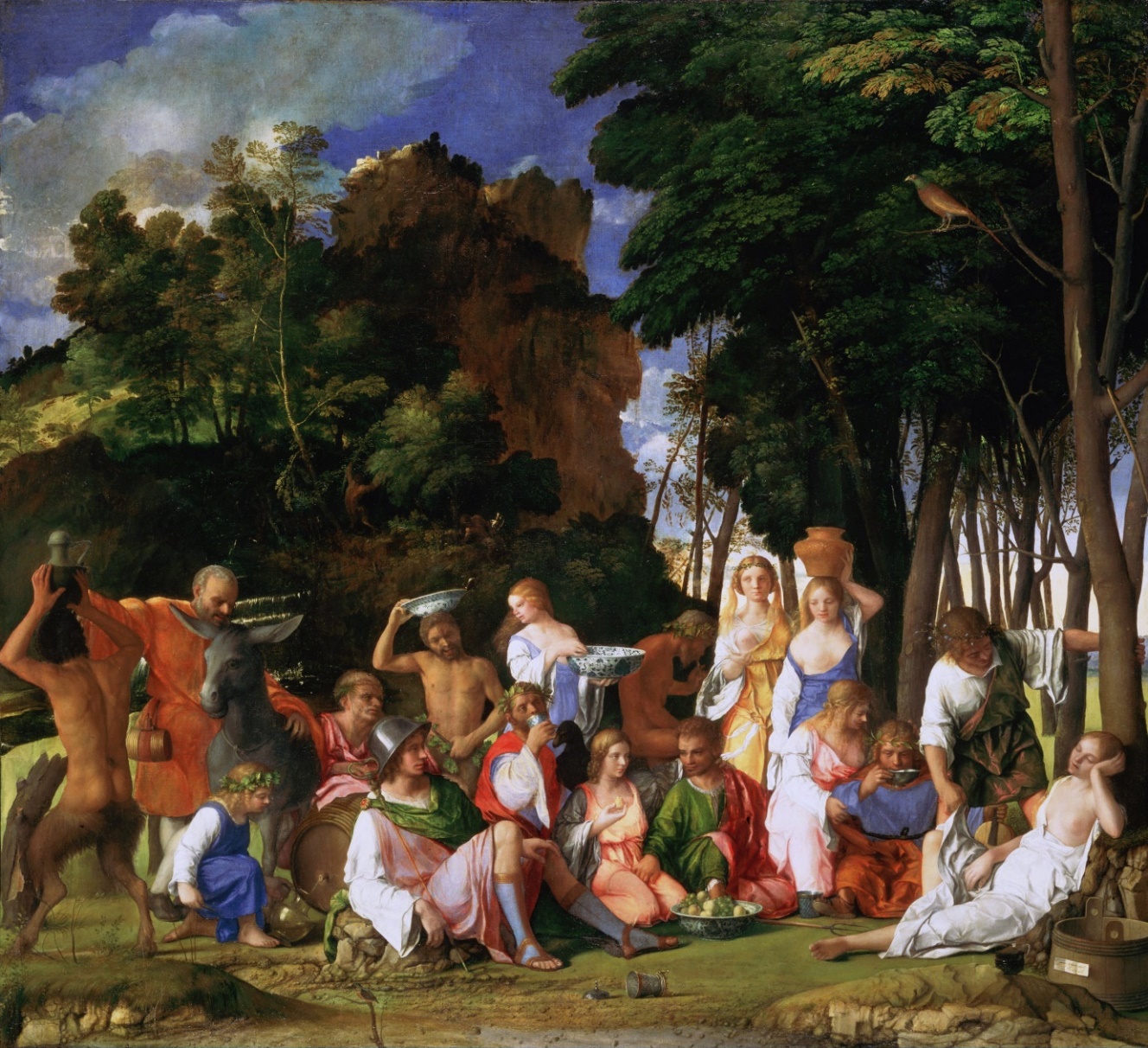 ĹThe Feast of the Godsĺ, based on a bacchanalian tale by Ovid featuring Apollo, Jupiter, Neptune and others eating, drinking and carousing, was painted only a year or so before Giovanni Belliniĺs death. And, though it featured additions by Titian and Dosso Dossi, really shows just how far heĺd come in his long career.

His impact on others including his students Titian and Giogione (the latter may not be so familiar as the former since he died young and only left half a dozen paintings) is undeniable. But that on the young German Albrecht DŘrer is stand-out. When he was 35, in 1505, DŘrer had travelled to Italy for what was his second time and stayed for a couple of years. During that time, without realising that Bellini was going to live and work for another decade, he observed that the latter was Ĺvery old but still the best in paintingĺ. DŘrer did more than verbally compliment Bellini, however, and then set to work executing portraits which self-evidently mimicked Belliniĺs style. It is likely, of course, that Bellini would have been flattered. DŘrer was no slouch himself. 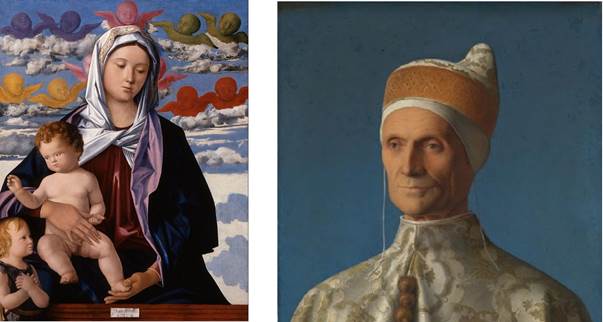 There is something intrinsically modern about both ĹMadonna and Child with the Infant St John the Baptistĺ (painted in ca 1480 when the artist was 50) and ĹDoge Leonardo Loredanĺ (painted in around 1501 when the atrist was 70).

In summary Giovanni Bellini was a bit of a game-changer, one who played a leading role in the rebirth of arts with which we associate the Renaissance, one who was stand-out in an era that was awash with great talent.

You can easily and affordably buy unframed prints of his work. Try going to the National Gallery site at www.nationalgallery.co.uk and searching for ĹBelliniĺ, for example. They have lots of his work for sale.