Where Have You Been? How to Make Family Travel Records You Can Frame If you've got a jet-setting family, as I have, it's easy to forget fairly quickly where you've taken the kids on holiday. (Let's hope you don't arrive home without them and then forget where they were last seen.)

Where Have You Been? How to Make Family Travel Records You Can Frame

If you've got a jet-setting family, as I have, it's easy to forget fairly quickly where you've taken the kids on holiday. (Let's hope you don't arrive home without them and then forget where they were last seen.) And the small ones may struggle to understand exactly where they've been (two of my kids had been as far away as New Zealand by the time they were five, and by now the four of them will have visited the majority of countries on the planet). As memories start to fade then so, too, can details of itineraries and adventures. The process can start even before you've unpacked your suitcases. Thus there is real merit in creating an enduring framed record of where you've all been. 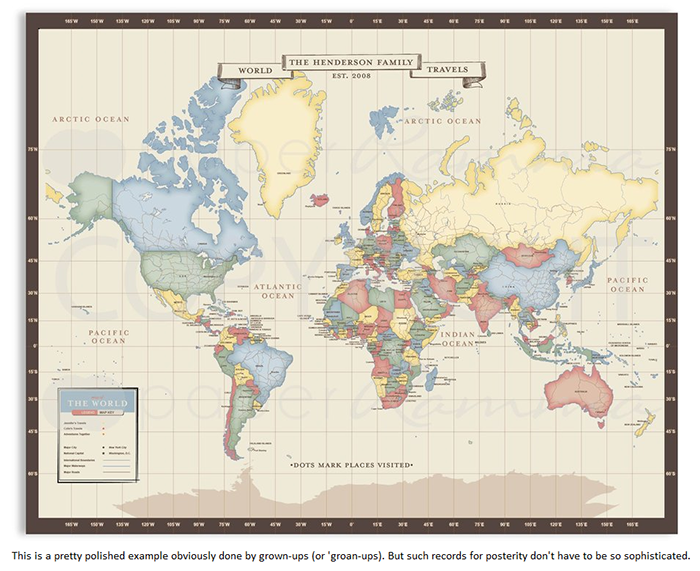 But I guess we should look beyond the kids. Though this is something that could be useful if mummy wants to show where daddy is working (or vice versa!) and moreover it could be harnessed as a record of where relatives come from in an era when mankind's mix becomes ever more homogenous and multicultural. In my own case the folk come from all four countries in the UK, Germany, Switzerland, Italy, Hungary, France, Scandinavia and the Caribbean. All of that can be captured visually in a project which the kids can undertake themselves with or without adult help. And this could be an opportunity to have them interact with grandparents or, indeed, great-grandparents – asking them for details which ought to be recorded before they're forgotten. Such conversations forge bonds between generations and encourage kids to gather useful data.

Lastly, though we're tempted to think of the educational value to children and the cohesive worth of such hangings when it comes to the family unit, there could be a value for the elderly too, who – as their memories fail with Alzheimer's and the like – might respond well to a visual that elicits memories of the life they've hitherto led.

In summary this article is designed to give you a few ideas to chart geographical origins and travels, creating sizeable maps that will be sufficiently precious and/or intriguing to frame and hang in homes.

Keep It Simple if Kids are Involved

The process ought to be easy-to-follow for kids and, of course, you can either ask for their ideas or guide them in the process (try letting them work out what you have already got in mind!) The countries, counties, cities and oceans can all be depicted in thousands of ways. There is nothing to stop the kids from making a glue-on doodle to represent a place or a memorable event or view from it. If you want to use flat colour then it could be painted. And I have even seen brilliant artwork done (by my own dad, when I was a kid) which involved cutting out scores of flat-coloured pieces from a clothing catalogue (very cleverly it may have stopped mum from buying dresses) and then gluing them side-by-side on a neutral base. 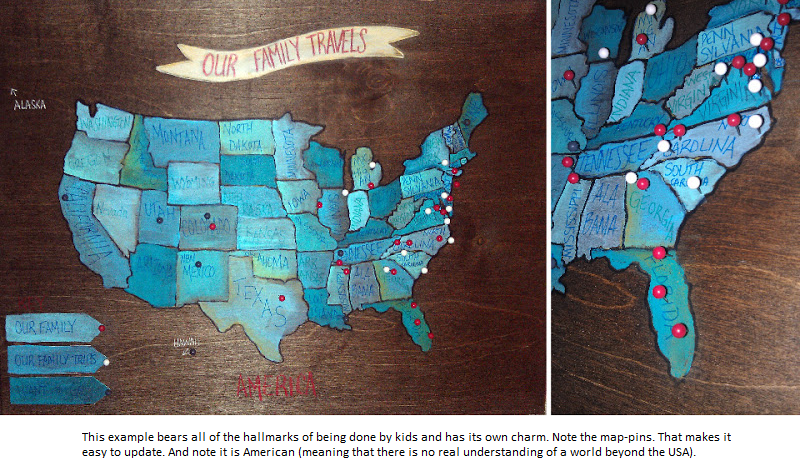 Map-pins are brilliant ways to identify locations that have been visited. Moreover map-pins allow you to update the chart every time you go somewhere else. But ideally you need a softwood or cork backing so little fingers can insert the map-pins. And coloured string or cord might be employed to show routes. 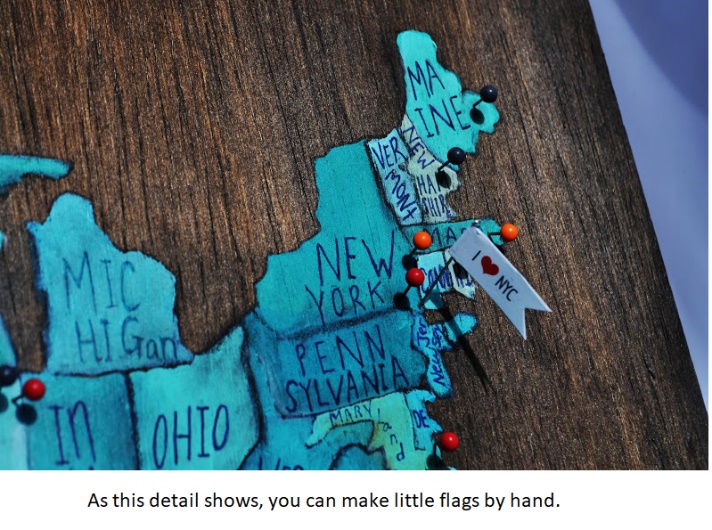 It could all be colour-coded too, with a key to remind you all of what you had in mind when you made it. Remember, though, with such interactive pieces you ought to frame them but it doesn't make sense to glass them over.

DIY projects apart, I have to admit that I love the Lonely Planet Kids product, which you can buy from Amazon at www.amazon.co.uk/Family-Travel-Lonely-Planet-Kids/dp/1760341010 (and there is even a European version at and an Australian version at the Lonely Planet shop at https://shop.lonelyplanet.com/products/my-family-travel-map-australia-1). Sure you'll probably end up having to take an iron to it before you glue it down onto the backing-board.

Of course the real appeal of such solutions is that the commercial product gives kids a neat starting-point. So you are marginally more likely to end up with something that is not an eyesore! 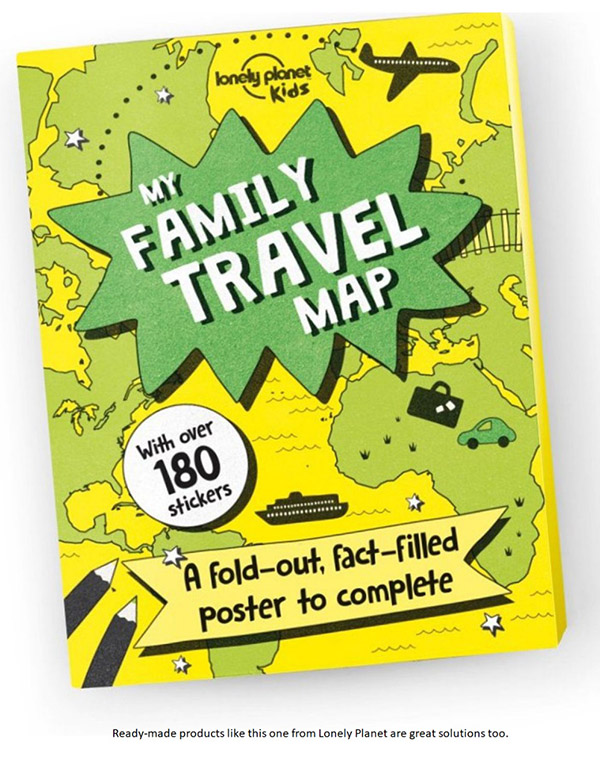 It is impossible to overestimate the educational value of such exercises with kids. They have the opportunity to start identifying locations (cities, countries and continents, seas and oceans) and they will be able to join the dots when they hear news from abroad because such exercises give them a growing sense of the world. They will learn about locations and distances as well as scales and time-zones. And gain an understanding of climates (if it's only as simple as knowing which countries are in polar, temperate and equatorial zones). They can learn about keys and legends, symbols and more too. So you become a facilitator of such learning. And you don't need to be a teacher to do that!

Indeed such maps could be used to not only record adventures but to plan them. So your kids could turn out to be the 21st century's equivalents of Phileas Fogg (from ‘Around the World in 80 Days', don't you know!) 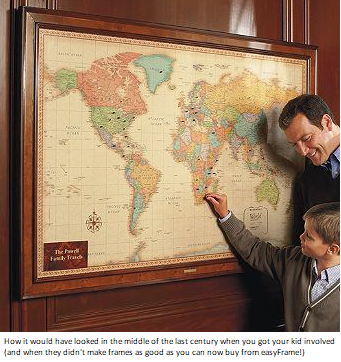 This sort of project is inexpensive. And great fun. It can fill a few hours on a cold and dark winter's day too. Moreover you can create something in which the whole family can take justifiable pride.

Whatever you create you'll probably want it framing. Unless you know your stuff when it comes to picture frames and mounts it's always worth going to experts. EasyFrame is an obvious and affordable supplier, whether you want to source all you'd need to do the job yourself or have them do it for you.