Roy Lichtenstein’s Pop Art Still has Lots of Fizz This article is about the output of Roy Fox Lichtenstein, one of the leading American pop artists who - alongside peers such as Andy Warhol - effectively broke the mould. During the 1960s they created work which ushered in a visual world as fresh and

This article is about the output of Roy Fox Lichtenstein, one of the leading American pop artists who - alongside peers such as Andy Warhol - effectively broke the mould. During the 1960s they created work which ushered in a visual world as fresh and revolutionary in the 1960s as the music of The Beatles and The Stones which it accompanied.

Lichtenstein was a bit of a comic in two senses; his work was often tongue-in-cheek parodies of recognisable originals and it usually mimicked graphic comic-book art. His most famous pieces, ‘Whaam!’, ‘Drowning Girl’, ‘Oh, Jeff … I Love You Too …But’ and ‘Look Mickey’, were described by him rather self-depreciatingly as ‘industrial art’. And indeed opinion has been divided. He was labelled as a copycat. And ‘Life Magazine’ once asked disparagingly of Lichtenstein ‘Is He the Worst Artist in the US?’ Though in his defence yet another work, ‘Masterpiece’, has been deemed to be of sufficient artistic merit to sell for 5,000,000 in 2017. So, were he still alive, he’d surely cock a snook at the critics. 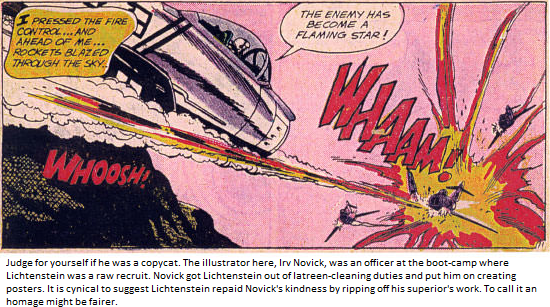 Lichtenstein’s legacy continues to influence contemporary culture; the Irish band U2 has used it as a backdrop for tours and Lichtenstein’s ‘Crying Girl’ was brought to life in the film ‘Night at the Museum: Battle for the Smithsonian’ (2009). So, in summary, it is visually arresting and unstuffy. And that makes it worth acquiring.

Lichtenstein produced many limited-edition prints. So ‘Drowning Girl’ (see below; also known as ‘Secret Hearts’ or ‘I Don't Care! I'd Rather Sink’) can be acquired unframed from sources such as the auctioneers at www.artsy.net/artwork/after-roy-lichtenstein-drowning-girl-1963-for-art-basel-1 (this particular print, up for auction, is one of 1,000).

What was Pop Art?

The so-called ‘pop art’ espoused by Lichtenstein and Warhol dominated much of the second half of the 20th century. It rejected elitist culture and instead hijacked imagery from popular culture. So its proponents used adverts (remember Warhol’s famous Campbells soup-cans?) And cartoons. Moreover the whole thrust of popularity, surely, was that it should be affordable for the populace. So it was never going to be confined to viewings within ill-lit and musty galleries. 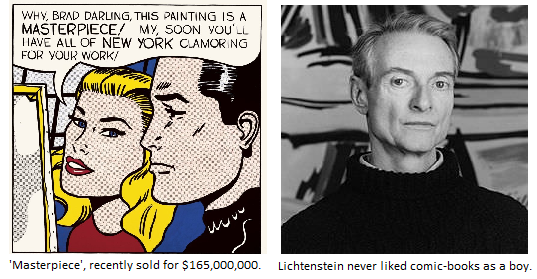 Lichtenstein was Jewish, born in 1923 and initially he worked in abstract expressionist art – largely as a cubist. But he began to hide cartoon figures such as Bugs Bunny within his work. Then at the age of 38, and teaching art, he became a pop artist when his son challenged him to paint a cartoon as well as the illustrator in his Mickey Mouse books. The result was the 4ft square ‘Look Mickey’ in graphite and oil which sold for Ł27,000,000 some 50 years later. In 1961 Leo Castelli put much of Lichtenstein’s work on show in his gallery. The whole lot was snapped up by influential collectors before the show opened. And Lichtenstein never looked back.

Often Lichtenstein would blow up very small originals by other artists and then transform them. His detractors will invariably point to this heavy reliance on the work of others for inspiration. So they will cite his own son’s Mickey-Mouse challenge: “I bet you can’t paint as good as that, eh, Dad?” They will speak of how ‘Whaam!’ was really the work of Irv Novick (whom Lichtenstein met in the army but who drew for MLJ Comics – later to be Archie Comics – and DC Comics, and was responsible for illustrating Batman, The Joker, Superman's Girl Friend Lois Lane and The Flash; indeed the original ‘Whaam!’ was in a DC Comics ‘All-American Men of War’). They will point to Tony Abruzzo’s original splash page from ‘Run for Love!’ in ‘Secret Hearts’ as being the source of ‘Drowning Girl’ (which incidentally, and Lichtenstein acknowledged this, rips off Hokusai’s ‘Great Wave’). And they will point out how he unashamedly ripped off everybody from Picasso to Van Gogh (see below; the original Van Gogh ‘Bedroom in Arles’ became Lichtenstein’s ‘Bedroom at Arles’). Yet, in all fairness, Lichtenstein always brought something new to the table and shone new light through old windows. He made subtle and crucial changes. And, if one is to create a worthwhile parody, one has to know what is being parodied! 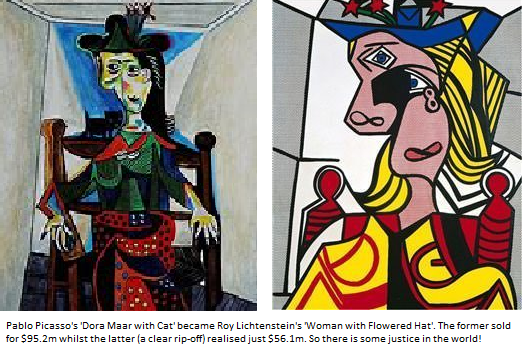 Incidentally, if you see the 3 pieces above, there are tell-tale signs that the artist Brittany Pyle copied the original which Roy Lichtenstein copied, not his work.

Lichtenstein was also a sculptor, demonstrating that he wasn’t out of his depth away from a flat page. But his subject-matter was wide-ranging, as the examples below demonstrate.

Roy Lichtenstein’s work will endure in its popularity. And even a print is likely to retain its value.

To find out how to obtain his work go to www.tate.org.uk/art/artsts/roy-lichtenstein-1508 where there is a shop. It is possible to purchase unframed prints, originals, and much more.

If you buy any of Lichtenstein’s prints (and if you want to accumulate a collection you’ll need to go to a number of sources to do so) you’ll need them framing and it’s best to have them framed by just one supplier with matching frames. Unless you know your stuff when it comes to picture frames and mounts it’s always worth going to experts. EasyFrame is an obvious and affordable supplier, whether you want to source all you’d need to do the job yourself or have them do it for you.