Why easyFrame is Now Yet Another Cut Above its Rivals In mid-May EasyFrame took delivery of an incredible bit of kit, a state-of-the-art machine that automates important parts of the framing process. This innovation effectively eliminates measuring and cutting errors, guaranteeing that customers receive

Why EasyFrame is Now Yet Another Cut Above its Rivals

In mid-May EasyFrame took delivery of an incredible bit of kit, a state-of-the-art machine that automates important parts of the framing process. This innovation effectively eliminates measuring and cutting errors, guaranteeing that customers receive finished jobs which respect the 'zero tolerance' approach to accuracy in frame construction that will keep EasyFrame in the vanguard as framers for years to come.
Rob Zanna, partner at EasyFrame, explains here how the A + AUTOMATION T2400 is enabling the business to up its game yet again. Moreover, in the process, he provides some fascinating insights into the kinds of errors that can creep into framing and catch out the unwary amateur.


A History of Collaboration with the Italian Suppliers

The sizeable T2400 which EasyFrame had shipped from Italy in its own wagon is not the first machine it has bought from A + AUTOMATION. Indeed it replaces another market-leading tool that EasyFrame has been using for years. Zanna, himself of Italian origin though his accent doesn't betray it, says that the T2400's predecessor was a superb machine in its own right though it wasn't as entirely infallible as its replacement has already proved itself to be. Yet, with the prescience of a man who's just parted with a hefty Ł30,000 for a single machine in a factory awash with them, he's already casting his eye over the forthcoming generation of machines from the same supplier. Of course, this sort of capital investment is unavoidable if EasyFrame is to remain on the top of the pile.

Summing Up What the T2400 Does

A + AUTOMATION has cannily created a single device that couples three processes viz:

What that means, in simple terms, is that the T2400 can do a vastly more accurate job in the hands of an alert operator than a customer could expect from the most skill artisan using hand-tools. It will take each moulding proffered to it and measure the rebate then cut it to any length whilst ordinarily allowing 2mm for the glass to drop in during the assembly process.


Putting Himself in the Frame

Zanna demonstrated the machine himself, it has to be said with the easy air of a manager who is not so far removed from the workface himself that he cannot readily operate any machine with confidence and evident expertise. And, as he did so, he explained that the wooden mouldings that he was using were no real test for the new kit.
"The T2400 can also cut plastic or aluminium." There is a wave towards a vast stock of mouldings lining the walls, mouldings reflecting the almost infinite variety of taste for which EasyFrame must cater. "It takes only a few minutes to swap over the saw-blades. But the process is simple."
Killing the power and opening the safety-cabinet, he points out the curious configuration of the teeth that he is currently using to cut wooden mouldings for the purpose of the demonstration. And he invites me to run my eyes and fingers over the finished result. It is, indubitably, sheer perfection. If there's a flaw I cannot detect it. Gone are the days when one could drive a horse and coaches through the gaps in picture-frames. Now there's not enough room for a cigarette-paper. Not with EasyFrame anyhow.

Customer expectations clearly preoccupy Zanna, who is justifiably proud of all that the business has achieved though he's aware of the risks of it ever resting on its laurels.
"In a sense the T2400 is a purchase that's as necessary as our great new website and our perennial investment in SEO. Like them this new machinery gives us an edge", he says. "It's not a luxury, despite the cost, but a commitment we have had to make to keep up with customer demand. Customers are no fools. They know that some of us can now work to this level of perfection, because such machines are rare but we're not unique in having one, and they see the results that it produces are markedly better. This is important when they're making an investment not only in whatever they wish to hang but the frame itself. So they want results, at affordable prices, which reflect the tolerances that 21st century tooling can achieve. We make our money back by increasing customer satisfaction and, in the hands of well-trained people, by being able to accelerate production so the investment is cost-effective."

Where Can it All Go Wrong?

Zanna sought to put the new capacity to measure and cut, with a precision that's beyond the ability of mere mortals, in perspective. In doing so he answered the question: 'How hard can measuring be?'
"Over the years I have lost count of customers who have innocently given us the wrong measurements to work to and then wondered what's gone wrong. People have used cloth tapes which are notoriously inaccurate. And they've even put them through the washing-machine without realising how cloth will shrink so that everything they then measure appears to be bigger!"
He laughs. As anyone would. But he is obviously sympathetic, admitting that we all make mistakes.
"But measurement is a minefield", he says. "Look at this steel tape. It has a fairly wobbly end anyway, and that could an error of a millimetre or more to creep in. If you're doing a DIY job then you'd be best to measure everything from the 20mm mark. So you avoid using the end. And then subtract 20mm from the total length."
He smiles.
"So you have to always measure twice and cut once. But, there again, you can just give the entire job - with the artwork, too, so that we can measure it - straight to EasyFrame. We won't bungle it. Though, if we did, it would be at our own cost. Anyone who's ever accidentally made a hash of a job, and then had to write off the cost of their materials as well as all their time, will appreciate that!" 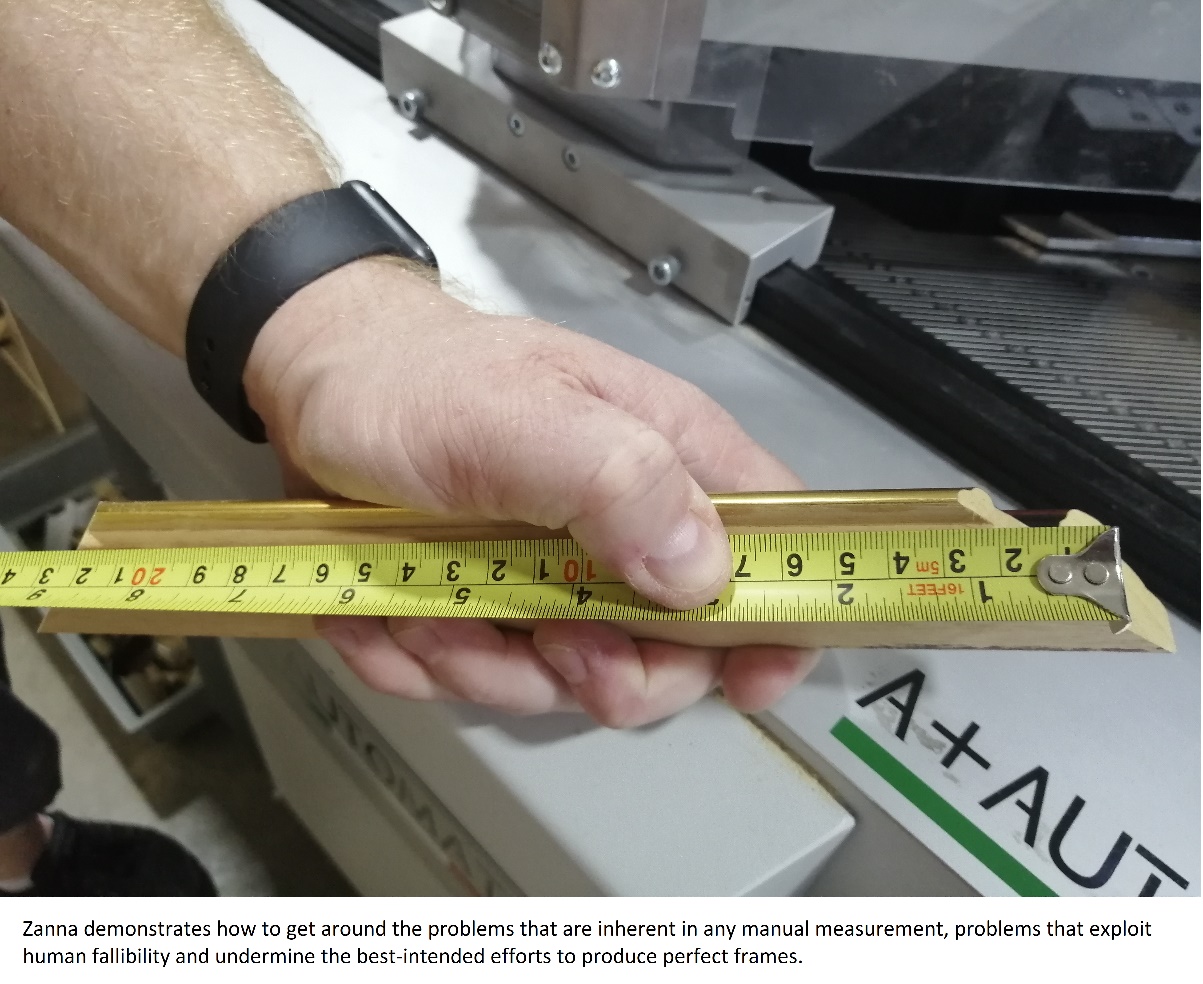 EasyFrame doesn't muck around. And the T2400 is proof of that.
If you are framing something precious it's always worth going straight to a professional framer like EasyFrame for advice. You could have them either do the entire job or help with part of it (whatever has left you jittery!) EasyFrame can also certainly supply much of what you need to do the job if you contact them. So they will help you with heavy-duty picture-hanging hooks and heavy-duty hangers as well as picture mounts and picture frames. Moreover, where the size and weight of the artwork pose risks, they'll help you to limit those risks.
EasyFrame is on 01234 856 501 and emailable via sales@EasyFrame.co.uk .