Mount to Live Hungry to acquire other game-changing technologies that can enable EasyFrame to lead the pack and provide customers with results that are hard (if not impossible) to better, Rob Zanna explains here how the business is going to be the first in the UK

In mid-May EasyFrame took delivery of an incredible bit of kit, the A + AUTOMATION T2400, a state-of-the-art machine that automates important parts of the framing process.

But, hungry to acquire other game-changing technologies that can enable EasyFrame to lead the pack and provide customers with results that are hard (if not impossible) to better, Rob Zanna explains here how the business is going to be the first in the UK to test another device. It's a high-end automated mount-cutting machine called the Novex, it's manufactured by the Swiss who have a bit of a reputation for great engineering, and it's not even been launched yet though it will hopefully be churning out products in EasyFrame's factory before the end of 2019.

That explains why Rob, a partner at EasyFrame, has been over to the Swiss Alps, And therein, as they say, lies a story!

A History of Collaboration with the Swiss Suppliers

Gunnar (whose website is at www.gunnar-int.com/home/) is the market-leading manufacturer of high-end automated mount-cutting machines which are known in the industry as CMCs or 'computerised mount-cutters'. This explains why EasyFrame is already on its second Gunnar CMC, the AiOX, (we should explain that the US English term is 'mat-cutter' to prevent any confusion). See www.aiox.me and/or www.gunnar-int.com/products/the-aiox/ if you're curious about the AiOX.

But, before the AiOX which EasyFrame will keep running even after the third machine arrives, they were the proud owners of an F1 hybrid also manufactured by Gunnar. So by now Rob has developed a good working relationship with Gunnar's UK support staff and their colleagues in the Swiss head office in Altstðtten, Saint Gallen. He trusts Gunnar. And Gunnar is well aware of EasyFrame's high volumes and technical abilities. So their track-record of collaboration means that Rob Zanna gets direct access to Gunnar's support and technical staff, something that thrills him. Though it has tangible advantages for Gunnar as I'll explain later.

Why the Swiss have a Head Start as Engineers

It's worthwhile to digress here. Anyone who knows the Swiss, and I do having lived in Switzerland for years, is well aware of their ability to design and construct great devices. It's thought that this is down to a combination of factors.

The Swiss speak four native languages, but the most widely used  certainly in the canton (or county) of St Gallen  is their own variant of German. As many of you may realise, German bolts together components to make words, a classic example being 'Donaudampfschiffahrtsgesellschaftskapitðn' which means 'Danube steamship company captain'. Actually there is supposed to be another word, 'Donaudampfschiffahrtselektrizitðtenhauptbetriebswerkbauunterbeamtengesellschaft' that means 'association of subordinate officials of the head office management of the Danube steamboat electrical services' though in truth it's a fabrication (by Austrians who wittily gave the name to a pre-WW2 night-club). Terms like these may be peculiarly clumsy to our English ears, and that night-club name is proof that German-speakers are capable of poking fun at themselves, but any linguist will tell you that the Germanic vocabulary suits occupations where systems and components are strung together. 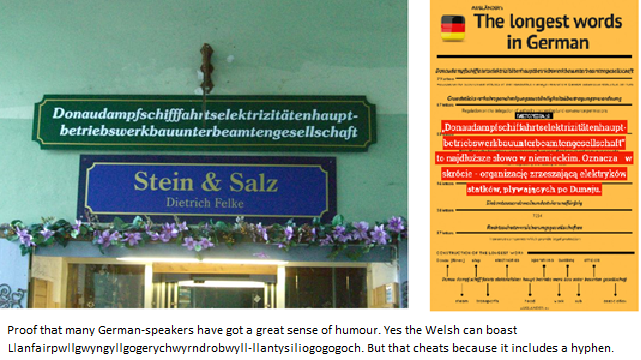 Apart from a language that gives the Swiss a head start (in the same way that Chinese is always going to enable its speakers to be better at mathematics), the Swiss are well-educated. The country's per capita GDP dwarves ours (in 2018 it was an estimated $83,583 per person which put the Swiss in 2nd place globally, whilst ours was supposedly $44,177 and put us in 19th place). So Switzerland can afford to lavish funds on education. Thus vanishingly few Swiss kids emerge from their schools without being able to read and write, as happens in many other countries including ours. (I can testify to this, with 2 of my own kids being schooled there and 2 here.) Most school-leavers then go on to be properly-trained in well-paid, lengthy and superbly-funded apprenticeships. As a consequence any Swiss citizen who states he's an engineer is likely to be head-and-shoulders above his counterparts abroad. So Gunnar benefits from an impressive heritage.

How EasyFrame have had a Small Hand in Development

One of the reasons why Gunnar's sales director Lars De Tomasi was able to justify inviting Rob Zanna to Switzerland on a trip, and kindly organise an excursion into the Swiss alps as well as to St Gallen itself, is that EasyFrame has actively and enthusiastically participated in the development of Gunnar's new Novex system. And Rob is very pleased to describe that collaboration.

"EasyFrame raised the possibilities of adding options to the Novex that would enable it to cut acrylic and MDF sheets. And Gunnar listened. But they did more than that. They acted on my suggestion. Then Lars was kind enough to invite me over to tour their factory and personally run a number of tests on the new machine to satisfy myself that now it could indeed now cut both acrylic and MDF in addition to picture mounts. Was I impressed? Of course I was! That's why EasyFrame will be first picture-framer in the UK to have the Novex. And this is going to be great for customers who will benefit because the finish of the acrylic and MDF edges will be greatly improved when compared to the edges which hitherto we'd cut on a sliding table saw."

Of course such purchases are always made on the basis of costs and benefits. But Zanna is pretty sure that EasyFrame will quickly achieve payback with the Novex. 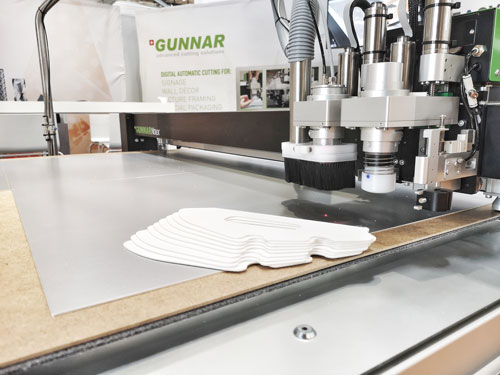 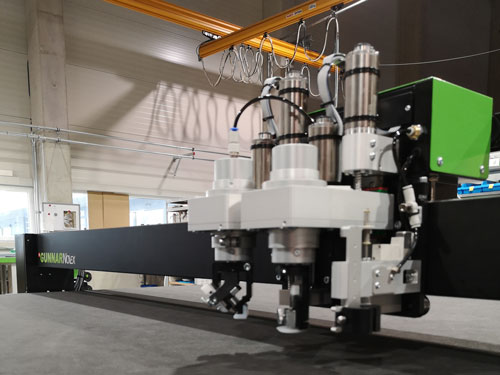 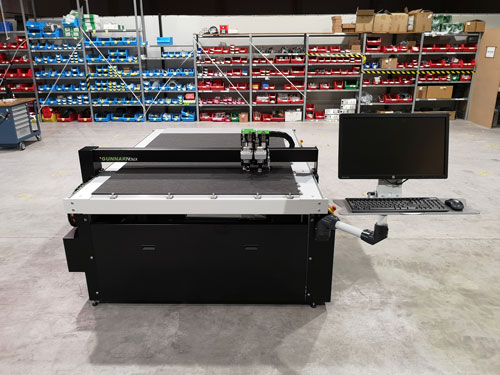 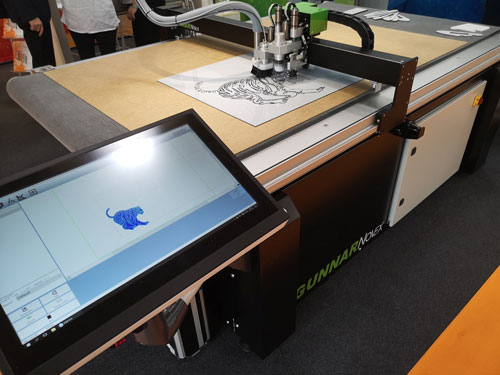 Gunnar's forthcoming Novex, Poetry in motion, of sorts. Rob Zanna and his staff cannot wait to get theirs and put it to good use. (And, admittedly, play with it!)

"Sure this is another very significant capital investment for EasyFrame. The Novex isn't a cheap machine, with the all singing/all dancing model costing around 3 times the price of our current AiOX machine. Yet we've never regretted a purchase from Gunnar and this will be yet another asset that will do more than repay its costs. Hopefully that will happen before I go to St Gallen to look at the fourth machine!"

EasyFrame doesn't muck around. And the Novex is further proof of that.

If you are framing something precious it's always worth going straight to a professional framer like EasyFrame for advice. Now, with the Novex when it arrives, you'll be sure of getting cleaner cuts of acrylic and MDF than was previously possible. If you'd like to see more of the Novex, and understand what it could do for you, check out this video.