The work 'Chairman Mao en route to Anyuan' was painted in oils on canvas by Lui Chunhia (please note that he is also known as Liu Chenghua, Chunhua and Cunhia), a youthful member of the radically communist Red Guard, more than half a century after Mao Zedong (the founder of the Chinese Communist Party, also known as Mao Tse-tung) led a peaceful miner's and railway worker's strike during 1922 in the Anyuan region (in the South of China, a little North of Hong Kong). Ultimately many of those workers joined his Red Army and set up the state we know in 1949.

The 75 x 55 cm painting is a fanciful-but-iconic composition that depicts Mao, when he was almost 30, in traditional dress but – even there – it was rather revolutionary in its execution given what had become convention over the intervening years. It is classed as falling within the 'socialist realism' genre.

By the time the Lui Chunhia painted the retrospective work it was considered the norm to show Chairman Mao (who was by then 74) in western clothes or a so-called Zhongshan suit (a buttoned-down baggy-panted 'tunic suit' in grey, olive green or navy blue with a flipped collar and four pockets). It was the norm to make the pervading colouring red because that reflected the colour of the 5-starred flag (though you should note that in 1922 and until 1949 the Chinese flag, although predominantly red, differed and had a blue panel in it). And it was the norm to have him surrounded by purposeful workers who were clearly on a mission with him as their inspirational leader.

In keeping with the tight controls that China has long exerted over the media, 'Chairman Mao en route to Anyuan' was not a random daubing but executed with a purpose in mind. And, once approved by The Party, it has been reproduced at least 900 million times.

This article looks at the painting itself and the artist, the subject, the event and the movement, and the specific purpose for which it was created. 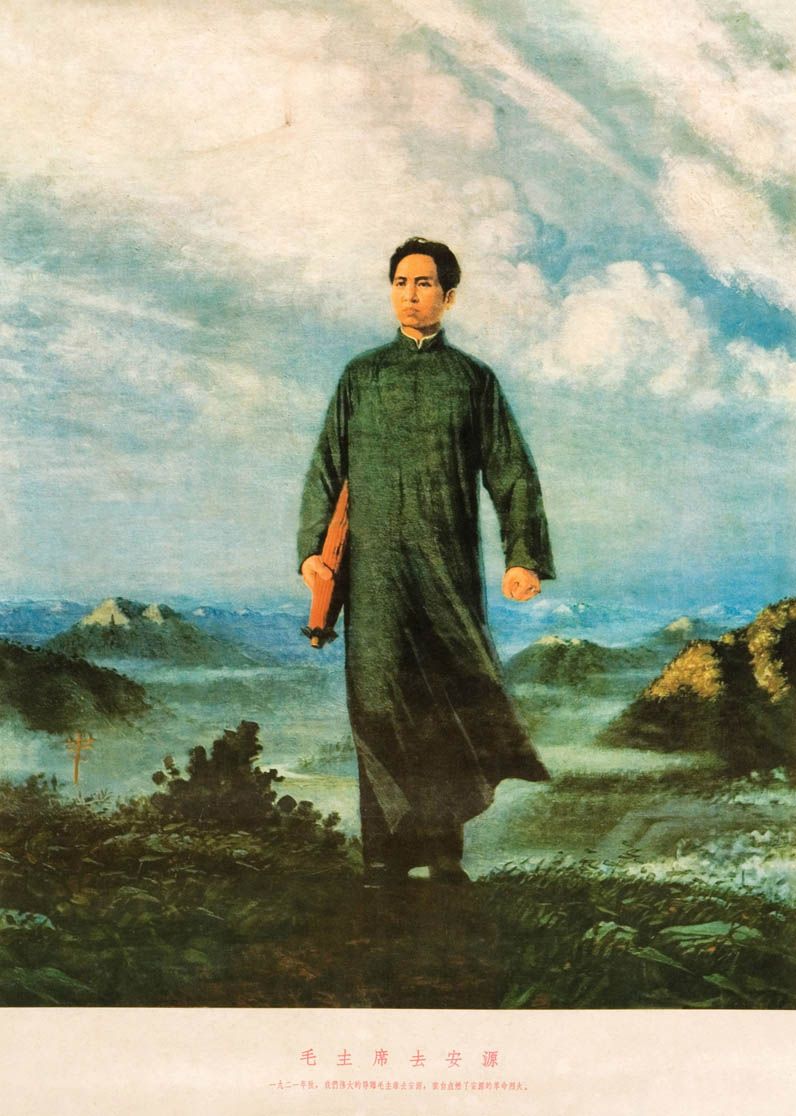 Mao is still a controversial figure because, whatever good he did, he could be a ruthless dictator. Yet he can be credited with being a military strategist, poet and visionary who unified China and ended not only imperialism there but decades of divisive civil war. He was erudite, writing in his 'Little Red Book' that 'Revolution is not a dinner party, or writing an essay, or painting a picture, or doing embroidery. It can't be done elegantly and gently'. It wasn't. Up to two million people were killed for ludicrous reasons during a 'cultural revolution' that was largely executed by 'Red Guards' who'd beat, torture and kill people for simply wearing glasses because that implied they were avid readers and therefore trying to be 'bourgeoisie' and thus better than their peers.

These atrocities were at their height in 1966 and 1967, when the painting was executed. 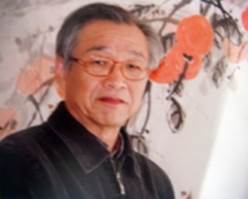 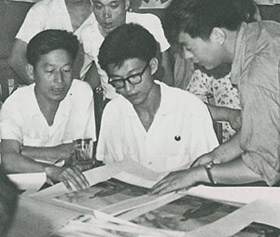 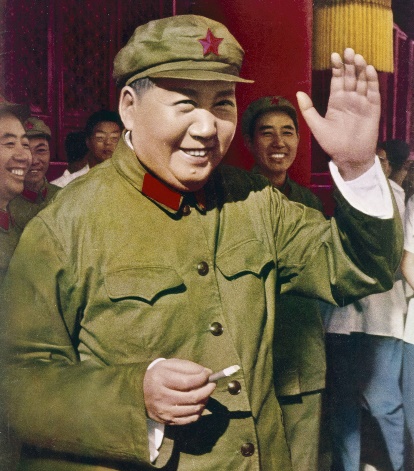 Above: Left is the artist Liu Chunhia. Centre is the artist (with glasses) in 1968. Right is Mao in 1967 when the painting was commissioned.

It is worth realising just where Chairman Mao's revolution sits in respect of the global communist movement.

But then there are so-called 'socialist' states that include Portugal, Sri Lanka, India, Guinea-Bissau and Tanzania. India and Russia can arguably be added to these but in 1991 the Russian-led USSR fell and in 1993 the Russian constitution effectively allowed a multi-party state.

Why This Painting was Different

It is important to understand that this painting was in a genre (so it wasn't unique) which really did break with convention. Previously Chinese art-work had really been dominated by pen and wash on hanging paper scrolls, with one typical example being Li Keran's 'Ten Thousand Crimson Hills' which was painted in 1963. But the oil-on-canvas approach was one which was adopted from the Russians who had obviously influenced China. 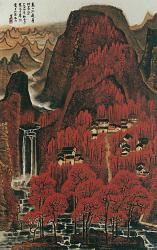 What's Going on in this Work?

The Centralized Propaganda Department would normally insist on the way in which they wanted Chairman Mao depicted. But here Liu Chunhia was given some artists' licence to break with customs, habits, culture and thinking. So he went to Anyuan and interviewed some of those 13,000 workers Mao had helped in 1922, workers who were still alive and who remembered Mao coming to support them. And then he portrayed the party-leader alone, perhaps because in a sense he still was. Because, even though Mao had helped to found the Chinese communist party the previous year, in 1921, China's blue touchpaper burned rather slower than Russia's had done.

Five years later, in 1927, this prosperous peasant's son, who had been working in a university, led the Autumn Harvest Uprising against the ruling political party of the time and landlords. That insurrection only lasted three months and was then supressed. But Mao learned from it that he needed an army. Of course he had already forged friendships in Anyuan that would help to provide that army – the so-called Red Army. And that's why, ultimately, Anyuan was so significant. The fact that the resistance in Anyuan was passive will also have been important. 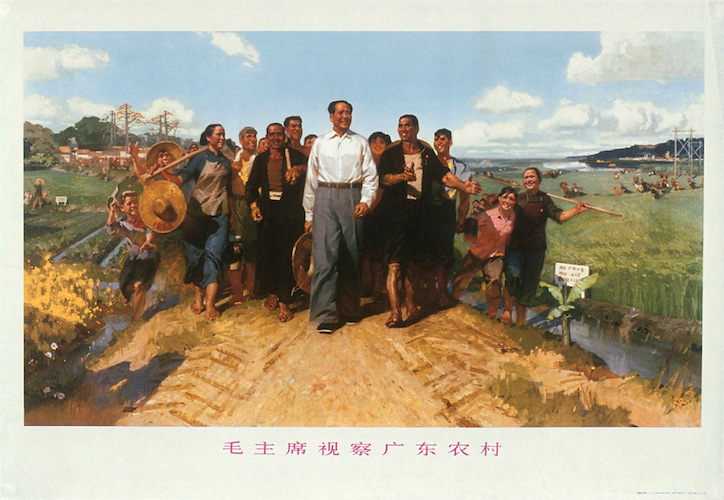 Above: Chen Yanning's 'Chairman Mao Inspects the Guandong Countryside'(1972), a far more typical painting of that era in terms of composition. Admiring peasants were 'de rigueur'.

Why Paint a Retrospective Half a Century Later?

Under the Maoist regime pretty well everything was done for a reason (though some things were ludicrous reasons; in 1958 hundreds of millions of Chinese killed sparrows which Mao said were eating their crops, only to find that in the absence of birds the insects ate their crops instead – this classes as one of the biggest man-made environmental disasters of all time).

During the decade 1966 to 1976 the Chinese conducted what we usually call their 'Cultural Revolution' though originally it was termed the 'Great Proletarian Cultural Revolution' (proletarians being common people). It was a violent purge that Mao intended to get rid of any remnants of capitalism or imperialism.

In fact this so-called Cultural Revolution was an attempt to revise history and distract the population on a couple of counts:

So Liu Chunhia was to paint Mao almost as a superhero, atop a mountain, young and purposeful. One is tempted to say that the work, which was a commission for an exhibition, exemplified 'blue skies thinking' before the term was ever popularised.

You should note that this kind of disingenuous glossing-over of communist failings has been mocked in Western literature, notably through novels such as Aldous Huxley's 'Brave New World' (1931) and George Orwell's 'Animal Farm' (1945) and '1984' (1949). And note that in the 21st century China is becoming the superpower. 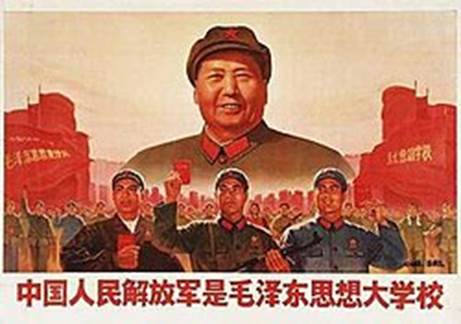 The artist was born in 1944 in Tailai, in China's Heilongjiang Province. In 1959 he went to a secondary school attached to the Lu Xun Art Academy in Shenyang. Then from 1963 he attended the Applied Arts Department of the Central Industrial Arts Academy. His most important work was 'Chairman Mao en route to Anyuang' and it was championed by Mao's 4th wife, Jiang Qing (who was later to become one of the subversive 'Gang of Four' for which she was sentenced to death though she supposedly hanged herself). At the time she essentially dictated what went on in the arts, what was acceptable, and the imagery that was to be shown to the outside world.

So What Did the Artist Say About His Commission?

A clearly-loyal Liu Chunhia is credited as saying (in translation) that 'Chairman Mao received the Red Guards on many occasions during this great and unprecedented proletarian cultural revolution. Each time I saw Chairman Mao's stalwart figure and kindly face, waving his hand to us, my heart was thrilled and excited. I shouted at the top of my voice, "Long live Chairman Mao! Long, long life to Chairman Mao!" In these moments I longed to use my paints and brush to portray our great leader, the red sun in our hearts, for the masses of revolutionary people!'

In summary here is an historic document that, whether one likes communism or not, captured an imagined moment on the road to power that Mao took. A century later the state which he built is about to become the most powerful on earth. And, because it is, one should understand something of its history.

For more information on the painter's thoughts see Painting Pictures of Chairman Mao is our greatest happiness | Chineseposters.net.

It is possible to affordably buy unframed prints of work by Liu Chunhia. But with 900 million copies of 'Chairman Mao en route to Anyuan' printed you should be able to locate one pretty cheaply.