How Dotty was Pointillism? This article is about 'pointillism', a painfully-meticulous technique employing distinct dots of colour which was developed by Paul Signac and Georges Seurat, partly in response to impressionism so pointillism can be described as being from the 'neo-

How Dotty was Pointillism?

This article is about 'pointillism', a painfully-meticulous technique employing distinct dots of colour which was developed by Paul Signac and Georges Seurat, partly in response to impressionism so pointillism can be described as being from the 'neo-impressionist' (or 'post-impressionist') stable. Subsequently the aforementioned pair evolved a not-dissimilar technique called 'divisionism' (and also known as 'chromoluminarism', which literally refers to the light generated by colour divided by the white background), using larger cube-like strokes. These artists were starting to look at hues and tones in a more methodological way, trying to create an optical effect by the juxtaposition of colours that was effective at a distance from the canvas. So pointillism and divisionism could be thought of as 'scientific impressionism'. And to the practitioners this seemed to be more desirable than the 'romantic impressionism' that had come beforehand. Opinion as to the appeal of both pointillism and divisionism was then, and remains, divided. Not everybody could, er, see the point of it. Arguably it brought out obsessive-compulsive tendencies. But both techniques generated some interesting work and clearly were to influence Van Gogh, Picasso, Matisse, Dali, Gauguin, Cezanne, Derain and others including Andy Warhol. So pointillism and divisionism were ultimately at the (square) root of cubism, futurism, fauvism (tagging exponents as 'wild beasts', using non-naturalistic colour), surrealism and pop art. And it's worth looking at both movements together, partially because they're hard to separate from one another but also because of the illustriousness of their successors.

Seurat and Signac developed the technique in the late 1880s, and it had a mixed reception. Critics gave the technique its name in mockery (in French a 'point' is a full-stop, so this implied that the movement was a dead-end), and some other contemporary artists of note refused to exhibit alongside pointillists. Interestingly it was F?lix F?n?on, an art critic and anarchist, who first referred to painting-by-dots and it was he who was subsequently immortalised by Signac (see above) even though he personally preferred the terms 'divisionism' and 'chromoluminarism' to 'pointillism'.

A Nod to Science

Actually what the pointillists were trying to do had a sound scientific basis. And they felt that creating art which was intellectually satisfying - because it reflected the application of scientific principles - was important too. Today's designers and printers would recognise that, instead of blending pigments on a palette, the likes of Seurat and Signac were simply dividing everything into the CMYK process that splits everything into cyan, magenta, yellow and black (the 'K' in CMYK stands for black). So they used primary colours in proximity to each other to create an illusion of secondary colours. Of course here the artists were normally using oil-paints though occasionally crayons (because oil doesn't 'bleed' or mix as water-colours tend to) and there was white between the dots, but the effect is broadly comparable to what we see when we look at a TV screen or computer monitor where RGB (red, green and blue) are mixed. So the technique relies on an ability to fool the eye and brain, letting them take adjacent colours to blend them. In fact what these artists were doing was employing the research of Charles Blanc, who was not just a colour theorist but an experienced engraver, publisher, critic and professor of art history (he held several distinguished positions at once on merit). Interestingly, perhaps, Blanc identified not only colours that complemented each other in a harmonious fashion but colours that definitely didn't ? leading to Van Gogh deliberately clashing his colours in order to suggest conflict. 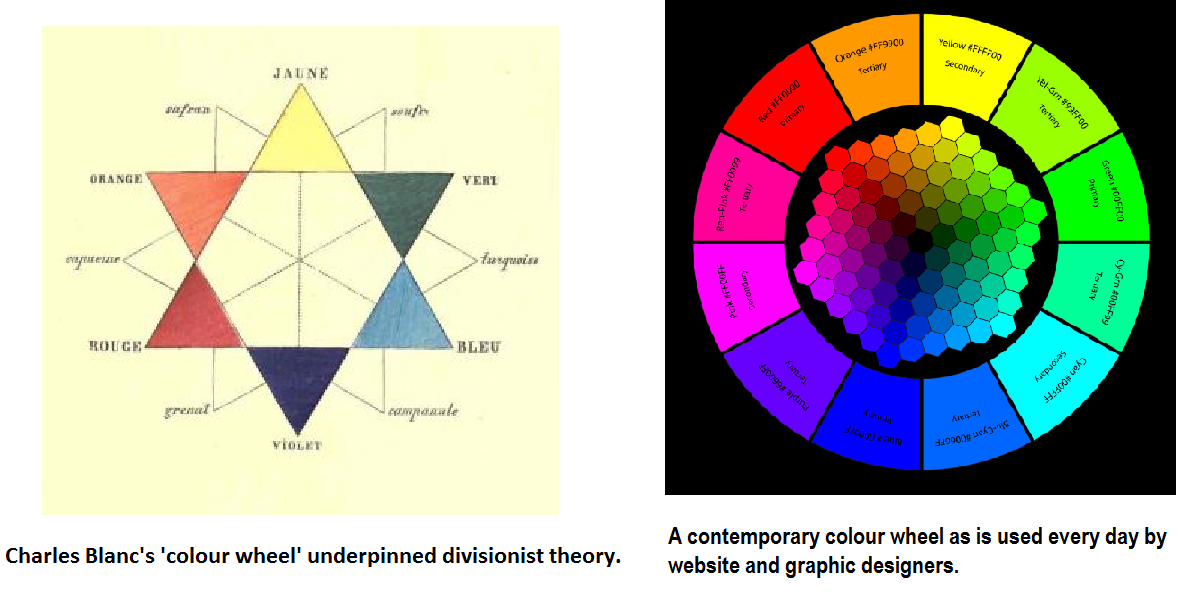 Blanc was not alone. The French chemist, Michel Eug?ne Chevreul, whose book 'De la loi du contraste simultan?e des couleurs' (which approximates to 'Principles of Harmony and Contrast of Colours'), made further pertinent discoveries in respect of cloth-dying. So this was joined-up thinking!

Pointillism as a jump-off point for divisionism, cubism, fauvism, futurism and pop art

It is indisputable that pointillism had a lasting influence on other artists and movements, one that is still evident today. Some of those spin-off movements were short-lived (Fauvism, for example, only lasted a couple of years at the beginning of the 20th century). Van Gogh would never have had the patience to sit meticulously applying oil in wee dots for days on end. But he certainly met Signac and even painted at least one canvas in collaboration with Seurat. So he was hooked, for a time at least.

Importantly the influence of pointillism is not just about pinpricks of paint and the illusion that they can create. It's about the adjacency of colours. It is this interest that transferred to Matisse, Picasso, Dai, Warhol and others.

After Seurat's death in 1891 both Signac and Henri-Edmond Cross (he was born a Delacroix but doubtless wished to avoid confusion with the recently-deceased Eug?ne Delacroix, the French romantic painter) continued the work of the pointillist movement. In fact Signac only died in 1935. And, by then, fellow artists such as Paul Klee and Maximilien Luce (interestingly another anarchist, like F?lix F?n?on) had taken up the baton.

Pointillism will endure in its popularity. And even a print is likely to retain its value. To see more pointillist work go to the Tate Gallery's pages at http://www.tate.org.uk/art/art-terms/n/neo-impressionism and http://www.tate.org.uk/art/artists/georges-seurat-1926. There is much more online, for example the Signac digital collection at https://libmma.contentdm.oclc.org/digital/collection/p15324coll10/id/161820. So there are plenty of sources for prints. You'll need them framing. And help with the picture mounts and more. EasyFrame is an obvious and affordable supplier, whether you want to source all you'd need to do the job yourself or have them do it for you. Any good framers will be able to show you a vast range of different solutions and advise on what might be the most suitable given the work and its proposed location.