Georges Braque (1882 – 1963) Born in Argenteuil, which lies within the department of Val-d’Oise just to the North West of Paris, Georges Braque was an influential, avant-garde and arguably revolutionary 20th century painter, print and collage-maker, draughtsman, stage designer,

Born in Argenteuil, which lies within the department of Val-díOise just to the North West of Paris, Georges Braque was an influential, avant-garde and arguably revolutionary 20th century painter, print and collage-maker, draughtsman, stage designer, plaster engraver and sculptor.

An impressionist from the outset he is best remembered for his involvement with both fauvism and cubism. A contemporary of both Henri Matisse (famous for leading the fauvist - i.e. bestial - movement) and Pablo Picasso (renowned for leading the cubist movement), Braque was eclipsed by both though his cubist work is so good that it has often been confused with that of the Spaniard.

Braque is often overlooked because, next to self-promoting exhibitionists like Picasso, he was maybe too private for his own good. Yet he certainly deserves reverence on his own merits. His legacy is seen as perhaps reflecting his own character in that it is calming, reflective and sedate. But he wasnít just a passive follower-of-fashion and is acknowledged to have invented the Ďpapier collťí (or pasted paper) method of creating collages. He also distinguished himself by designing two sets for Sergei Pavlovich Diaghilevís ĎBallet Russesí - the Paris-based Russian ballet (which, interestingly, never performed in Russia owing to the unhelpful attitude that the revolution there had towards performers). He designed church windows. And he created some great etchings and aquatints in collaboration with Aldo Crommelynck. 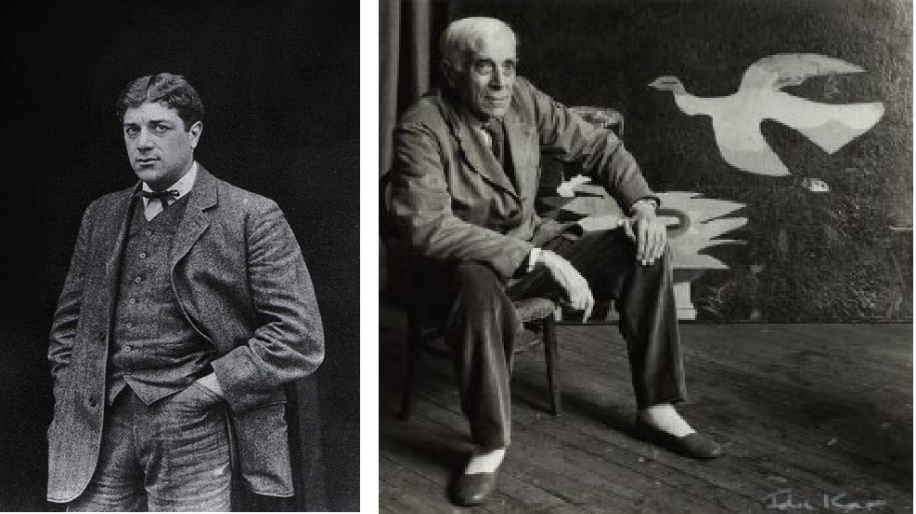 Left: Georges Braque at 26 when he was fancifully described as one of the Ďwild men of Parisí. Right: the artist photographed at 78 by Ida Kar, the London-based Russian camerawoman.

The young Georges Braque was raised mostly in Le Havre, on Franceís Northern coast and about 120 miles from his birthplace. And it was here that by day he became, initially, a third-generation housepainter in the footsteps of his dad and granddad. But he was evidently ambitious and thus by night he studied at the local …cole des Beaux-Arts (or school of fine art) in his mid-to-late teens. Then he became an apprentice to a master decorator and qualified when he was 20, after which he spent a couple of years training as an artist at the Acadťmie Humbert near the Moulin Rouge in Montmartre, Paris. It was there that Braque met soon-to-be-influential avant-garde friends including Francis Picabia (the cubist / dada / surreal painter, poet and typographist) and Marie Laurencin (the painter and printmaker).

In 1907 Braqueís exhibition at the Salon des Indťpendants was of work in the fauvist style that had begun in 1905. Despite being bitten by the fauvist bug, in truth that movement was transient.

Then in 1908 Braque had his first solo exhibition at a gallery owned by at Daniel-Henry Kahnweiler, a prominent German-born art-dealer, collector, critic and huge supporter of the cubist movement. Braqueís fascination with cubism was rather less ephemeral than that heíd had for fauvism, since subsequently he was to perpetually utilise elements of cubism whatever the work (though his pal Picasso had moved on, it has to be said). Of this particular show the critic Louis Vauxcelles said that Braque was a daring man who despised form, reducing everything - be they places and figures or houses - to geometric schemas, to cubes.

It was in 1922 that Braqueís exhibition at Parisís Salon d'Automne propelled him irrevocably into the public eye. Subsequently in 1933 he had a big show of his engraving work in plaster at Baselís Kunsthalle. And in 1937 he won first prize for the same medium at the Carnegie International in Pittsburgh.

Pinning Down the Divide Between Fauvism and Cubism

Best exemplified by the work of Matisse, fauvism was a short-lived preoccupation with strong colours, simplification, abstract imagery and pretty random brushwork. It was clearly expressionist in that detail was ignored. That explains why the term, referring to Ďwild beastsí, was used to describe the genre. And it seemed to be a stepping-stone en route to cubism.

As for cubism itself, it demonstrated a preoccupation by artists with their analysis of multiple perspectives. This effectively Ďfudgedí the form in question, thereby capturing movement though there might be none. Braque himself spoke of shattering objects into fragments as a way of getting to the essence of their composition. He and Picasso were the leading proponents of cubism and often worked side-by-side to produce very similar cubist interpretations of the self-same subject-matter.

In the late 1930s through to the 1950s Braque jumped on the poster bandwagon, and in this was encouraged and supported by Fernand Mourlot, a decorative artist himself, who owned and ran the Mourlot Studios which encouraged great artists of the day to come and work onsite to create original work that could then be mass-produced on litho using the latest technology. This was obviously a great revenue-generator for artists like Braque, whereas just a generation before any prints had to be created by hand - something that was a skilled job. But, obviously, this advance enabled the man-on-the-street to affordably own faithfully-reproduced fine art.

In 1910 Braque was introduced by Picasso to a model, Marcelle Laprť. They were to marry two years later and settle in Sorgues, Provence-Alpes-CŰte d'Azur, where they had two sons Henri and Leo.

Braque joined the French army in 1914 at the beginning of the Great (First World) War, and was so seriously head-injured during a battle in the following year that he became temporarily blind and had to be trepanned (the skull is drilled to release pressure). It was a couple of years before he was to recover. Yet he lived on and had a long life, though later ill-health prevented him from taking on big projects, only succumbing to a cardiac arrest at the ripe old age of 81.

Although he began with landscapes Braque later turned to painting still lifes, in part because he could move around a smaller subject, he could actually touch it, and he could see it from different angles. Perhaps this tactile approach explains why his work became more likely to incorporate textures. He experimented eternally with bright colours. Ultimately he painted more realistically as his style matured.

In summary Braque was good enough to rub shoulders with Picasso, who clearly admired him. Moreover even today Braqueís work is perennially popular. And that says it all.

If you have deep pockets see the Sothebyís auction site at www.sothebys.com/en/artists/georges-braque. But, if you havenít, you can easily and affordably buy unframed Braque prints. Try www.georgesbraque.net/prints/ and www.etsy.com/ for example.