Frida Kahlo’s Self Portrait (1932) The work ‘Self Portrait Along the Borderline Between Mexico and the USA’, by a largely-self-taught naďve-folk-art-cum-surrealist painter who was in every sense unconventional, features the artist at 25 as she straddles the threshold betwixt two contr

The work ‘Self Portrait Along the Borderline Between Mexico and the USA’, by a largely-self-taught naďve-folk-art-cum-surrealist painter who was in every sense unconventional, features the artist at 25 as she straddles the threshold betwixt two contrasting worlds (that of the agrarian Mexico from which she came and the industrial North America on which she felt her commercial career depended).

She was inviolably bound to both. An oil-on-sheet-metal painting of just 12 Ľ x 13 Ľ inches, it’s rich in iconic symbolism. It’s also intensely gloomy, reflecting the fact that the artist was perpetually in pain, often unhappy, and was at this juncture beginning to realise that she could never have children. She herself observed in writing that the work was created in order to express the trauma of not only being homesick (she was in the USA when she executed this) but also because she felt tremendously isolated, especially after her second miscarriage.

We look here at the work itself, the context in which it was created, and at its creator. 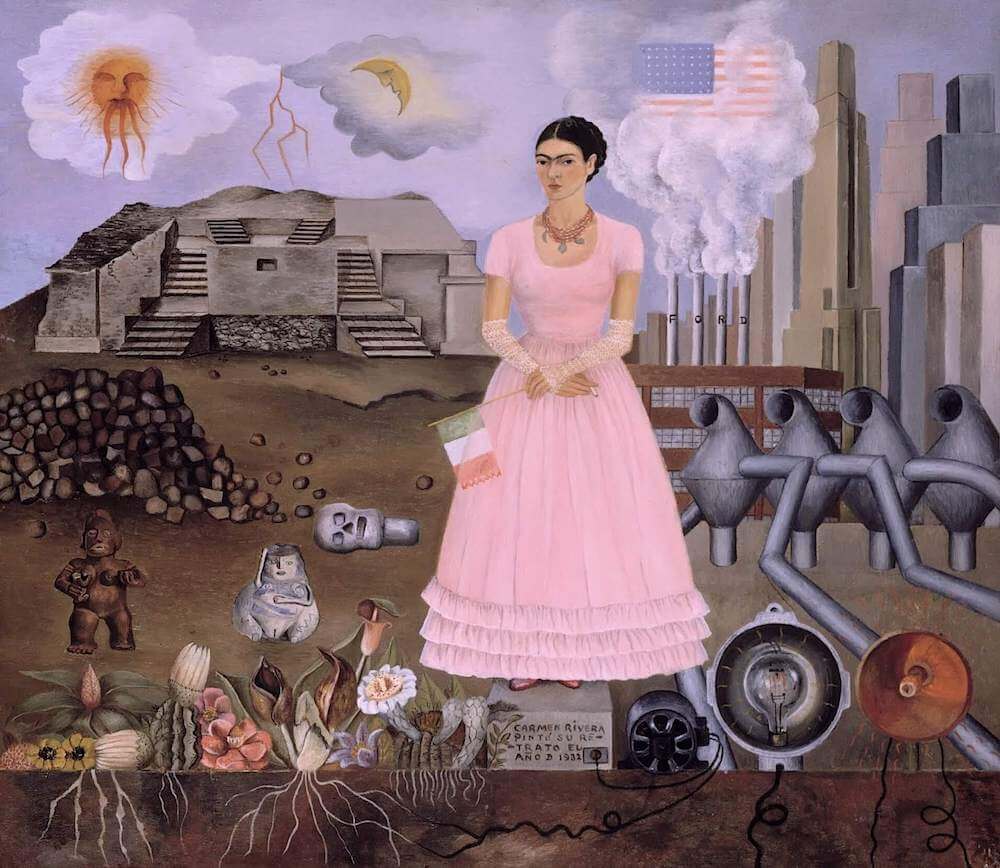 Above: Frida Kahlo’s ‘Self Portrait Along the Borderline Between Mexico and the USA’ (1932).

The Artist, Her Ill-Health and Training, and Her Lifetime of Tragedy

Born Magdalena Carmen Fri(e)da Kahlo y Calderón in Mexico City during 1907 to a German Lutheran father Carl Wilhelm (who renamed himself ‘Guillermo’ to shake off the Germanic heritage) and Matilde Calderon y Gonzalez, a Catholic ‘mestiza’ mother (so she had a mixed European, probably Spanish, and South American heritage), Frida was the third of four sisters though there were two half-sisters too. Her mother seems to have been rather frightful, but her father wasn’t.

For a while Frida worked with her father, a photographer. A friend of his, a printmaker called Fernando Fernández, taught her to draw in the aftermath of her accident but that seems to have been the extent of her training.

Her father suffered from epilepsy after a childhood accident and the two were perhaps all the closer because they could empathise with each other’s infirmity. Frida developed polio at the age of six which left her with a thin and weak leg. Then, at the age of 18 and when she was contemplating a career in medicine, she was impaled on a railing that went through her pelvis and uterus as the bus in which she was riding with her boyfriend was in an accident that killed several others. He survived unscathed and helped remove her from the railing on which she was impaled. But thereafter she faced a long period of convalescence. Moreover she was never out of pain. Yet her wish to give birth then created another bond with her father since his first wife had died in childbirth. Perpetually denied the chance to be a mother, Frida was to lose several children because they were either aborted to save her life or because she miscarried. Later she needed bone-graft surgery to her spine, she lost a leg to gangrene, she contracted bronchopneumonia and she died of either a pulmonary embolism or an overdose of painkillers that may have been suicide (without a post-mortem it was never clear). Her last drawing was of a black angel. She was just 47. 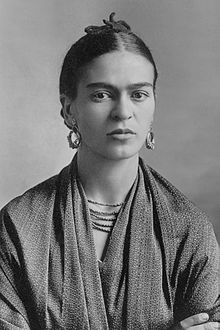 Above: The artist pictured in 1932 at 25, the year she executed the work in question, photographed by her father.

The Artist’s Politics, Sexuality and Possible Involvement in Murder

Mention of the artist’s politics and sexuality is not gratuitous. So let’s deal with that.

It appears that she was sexually abused by a female teacher when she was young, and it’s noted that she was probably wearing one of her dad’s suits in a photograph of her in her teens. Thereafter she was often considered to be androgynous. But she’s seen as a feminist too and, it has to be said, in this work there is a girliness as well as a flouncy pink dress, long lacy gloves and prominent nipples. Yet in the painting she has a fag in her hand and it is no secret that she had a reputation for swearing like a trooper.

She was to marry a man – the great muralist Diego Rivera – twice (the brief divorce was on the grounds of mutual infidelities though they’d remained friends whilst divorced) but they had what one would term an ‘open marriage’ in which both had other lovers and shared some. So she was certainly bisexual and has in recent years been perceived to be a standard-bearer for LGBT rights.

As for politics, in later years she became stridently communist but she always had leanings to the left and one of her many lovers was Leon Trotsky. She’d got him his political asylum in Mexico during 1937 when he fell out with Stalin, after which Trotsky and his wife Natalia Sedova were provided with a home by Kahlo and Rivera. Subsequently Kahlo embarked on an adulterous affair with Trotsky right under Natalia Sedova’a nose since the latter didn’t understand English. She found out and read her husband the riot act, and Kahlo was bored anyway but later she used to wind up Rivera by bragging about that affair.

By 1939 the couple had abandoned Trotsky for Stalin and actually the political differences were having repercussions within Mexico. Trotsky tried to rekindle the affair with Kahlo, possibly to get her to stop Rivera from undermining him since he had been doing so publicly, but failed to divide the couple. She was to then meet a Russian agent called Ramón Mercader in Paris. Subsequently Mexican artist (another muralist) David Alfaro Siqueiros tried unsuccessfully to assassinate Trotsky. When he failed Ramón Mercader travelled to Mexico City and killed Trotsky himself, with an ice-axe. Kahlo and her sister Cristina were suspected, implicated and briefly jailed, but if they were involved they got away with it. Indeed it might have been Kahlo’s celebrity, and Trotsky’s nuisance-value since he may well have outstayed his welcome in Mexico once he started interfering in its politics, that allowed the case against Kahlo to be dropped.

What’s Going on in this Painting?

As with all of the artist’s work, the subject-matter reflects who she considered herself to be and what her life-experiences had hitherto been.

The contrast between the Mexico she loved and the adjacent USA which her husband loved (she’d married him in 1929) is self-evident.

The Mexico she admired (see the flag she holds) was historic, rural, agrarian and pre-Columbian (so we’re talking about the Americas before Christopher Columbus pitched up in 1492).

The USA that her husband championed (and she fled to him in the USA when freed in the wake of the Trotsky assassination) was industrial and mechanised, with skyscrapers and a Ford car-plant.

We can see a ruined temple (in Mexico there were the Aztec and Maya civilisations). There’s also rubble and a Totonac stone skull (the Totonacs were Indians from Veracruz and Puebla in East Central Mexico) together with fertility idols (from Jalisco in West Central Mexico and Colima in the South West) as well as verdant plants with white roots, a sun and moon (and lightning between them which may reflect intersexual frisson). In general this montage is about life, about creating it, about sustaining it.

In contrast the American side of the artist is futuristic (well it looked futuristic in the days this was painted) yet lifeless. There are black cables that seem to be drawing power from the Mexican side of the border, smoke, ducting, chimneys and no real sky, and the US flag (its stars subdued compared to the sun and moon in Mexico) is under a perpetual cloud. It’s hardly alluring.

One should remember that the values that had built America were diametrically opposed to those of the communists (McCarthyism came in the late 1940s and early 1950s, but capitalism and communism have always been at odds). So this contrast is not just about a preferred lifestyle and heritage but political. It’s radical. It’s about the diametrically-opposed juxtaposition of fundamentals, a clash of cultures.

In the middle of this Frida Kahlo stands impassively, statue-like and torn between the two (though unequally so; we can see where her heart lies) on a pedestal of sorts, or a boundary-stone, on which are carved the words ‘Carmen Rivera painted her portrait in 1932’. It may be that ‘Carmen’ was employed because ‘Frida’ (and ‘Frieda’ seems to have been the spelling she used until the Nazis soured things for anyone with German heritage) were thought to be too German. And of course she’s using her married surname. She may have felt torn between the cultures, not least because much of her income would have come from North America and indirectly been generated by the industry she despised.

This composition has been described as akin to ‘A Ribbon Around a Bomb’, and indeed there is a documentary about the artist’s life by that name.

In summary here is a wall-to-wall nonconformist who ploughed her own furrow. A sad one. She left no children but a lot of very interesting art.

It is possible to affordably buy unframed prints of work by Frida Kahlo. See www.fridakahlo.org.