DISKS ARE NO LONGER SQUARE (BUT THE FRAMES FOR THEM ARE) There was a time when it looked like humble vinyl disks were consigned, for eternity and like the record turntables on which they were played, to obsolescence. In strictly musical terms vinyl disks wouldn’t be alone. Remember the 8-track sound system

DISKS ARE NO LONGER SQUARE (BUT THE FRAMES FOR THEM ARE)

There was a time when people had so little respect for vinyls that, God forbid, they did things like this with them.

There was a time when it looked like humble vinyl disks were consigned, for eternity and like the record turntables on which they were played, to obsolescence. In strictly musical terms vinyl disks wouldn’t be alone. Remember the 8-track sound systems they used to have in cars such as Zephyr Zodiacs? Or those cassettes with spools that you had to rewind with a pencil? Yes? Well vinyl records were like them. An anachronism. Something that had already had its time and now was effectively a museum-piece. That’s if it wasn’t turned into a plant-pot holders or the like (see above; we’d still recommend this if you possess, for instance, Mr Blobby’s 1993 Christmas hit). Even CDs are going that way now, with sales having gone through the floor because people would rather have downloads. But, almost against all odds, there has been a sustained resurgence of interest in the vinyl record as well as the humble record-player. And it can’t all be attributed to nostalgia.

In recent times Easyframe has been bombarded by requests to frame vinyl records. And they aren’t all copies of ‘The Sound of Music’ that have been sent by spouses and flatmates who realise that, if they’re safely embedded in a frame on the wall, they can’t be being endlessly played! So we take a look at the history of vinyl records, the resurgence in interest, the suitability of vinyl for framing, the service that Easyframe provides, the consistently-stunning results that the company delivers to customers, and plans afoot for the future.

Left is the 1975 Queen single ‘Bohemian Rhapsody’. Whatever happened to that? Meanwhile, right, is Bowie’s LP ‘Diamond Dogs’, the sleeve of which caused considerable controversy when it was released back in 1974.

How it All Started

At this point, and with the business having run with considerable success for as long as it has, there’s not much which Easyframe hasn’t already been asked to frame. And the staff always had the odd request to frame records. But there has been greatly-renewed interest and corresponding sales of polyvinyl chloride disks since 2007, interest stemming from a sentiment that digital music became too perfect and thus lost the soul that one associates with its analogue counterpart. Listeners wanted to hear the needle (or diamond-tipped stylus) drop onto the vinyl, they wanted to hear the dust and the static crackle, they wanted to hear plectrums and fingers on fretboards. And they were suddenly proud to purchase, own and use retro recordings and the sound systems on which to play them. That pride in vinyl ownership is starting to trickle through, now, to framers.

All these are examples of framings executed by Easyframe. Here we have half a dozen singles by Sting et al.

Soon after the end of World War 2, in 1948, the 10-inch or 12-inch LP (i.e. long-playing record) became the thing. These ran at 33 rpm (revolutions per minute), replacing the old 10-inch 78 rpm format that had been around since 1900. And these LPs were produced en masse by huge hydraulic presses. By the 1950s we then had singles, 7-inch pressings that ran at 45 rpm and usually bore just a track on each side. This coincided with the advent in the UK of the ‘Top 20’ singles in 1954. For a time it was quite possible to get mono (monotone) recordings but gradually, by 1970 really, they all became stereo. David Bowie’s ‘Space Oddity’ was one of the first singles, certainly, to be in stereo.

There have been variants, notably an EP or ‘extended play’ format which bears between three and six tracks, and which supposedly has a maximum play-time of 25 minutes (artists such as Lady Gaga, Miley Cyrus and Stevie Wonder have used this format). There have also been what are termed ‘maxi-singles’ by artists such as Mungo Jerry. Their 1970 worldwide hit ‘In the Summertime’, which has sold over 30 million copies to date, was on one such disk, being 7 inches in diameter like a standard single but it played at 33 rpm like an LP. This release only had three tracks on it but others by the band had a handful and were thus (especially since purchasers didn’t just get a flimsy white sleeve) considered to be good value. Lastly one should mention special editions such as the 12-inch (often ‘extended’) singles. These were popular in the 1980s and were notably used by Orchestral Manoeuvres in the Dark (OMD) for ‘Joan of Arc’ and ‘Love Cats’ by The Cure.

70s bands such as Mungo Jerry were unusual in using the maxi single and printing on card sleeves as if they were LPs.

Of course singles went into decline when CDs became popular in the mid-1980s, and LPs followed them. Nobody, except self-deluded geeks, expected a vinyl revival. That’s why there was a thriving business in recording entire vinyl collections for third parties, moving them onto CDs so that the vinyls could be dumped. Record-decks with digital outputs, so one could do this oneself, sold well.

And, actually, it’s amazing when you think about it. Because if one goes back to vinyl one has to not only buy the vinyls but a deck and amplifier too. That’s something that may involve a commitment to dispose of CDs. This is something of a volte-face for the consumer, but it is mirrored by Sony Music, for example, which stopped making vinyl records in 1989 and yet went back to it in 2018.

Left is an autographed sleeve for ‘Murder and the Motive’ by the up-and-coming welsh rock band Those Damn Crows (it made No 5 in the Official UK Rock and Metal Album Chart). And right is ‘The Lion King’, the Disney film soundtrack with music by Sir Elton John and Lyrics by Sir Tim Rice.

Sleeves like that for ‘Diamond Dogs’, the Bowie album, are recognised as suitable-for-framing collectible art. See www.udiscovermusic.com/stories/25-iconic-album-covers for ideas.

Nobody would argue that these sleeves by Wings, The Beatles, Bowie, Queen and Bruce Springsteen aren’t iconic art.

Notwithstanding Peter Blake’s album cover for ‘Sergeant Pepper’s Lonely Hearts Club Band’, we really we have Marc Bolan and T Rex to thank for the beginnings of glam rock. Their ‘sell’ was unprecedented. Not only were their singles unlike anything before them (standard fare was a plain white sleeve) but they stuck glitter on their faces and would send a video for ‘Top of the Pops’ to play instead of turning up like everybody else./p> 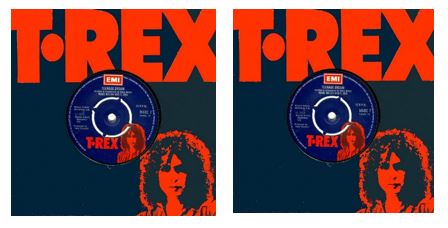 When singles like these (‘Teenage Dream’ and ‘20th Century Boy’) were released, their use of vibrant colours on the disks and sleeves, doubtless inspired by Andy Warhol, was unprecedented.

Such Vinyls are a Visible Reminder, on Your Walls, of the Soundtrack of Your Life

If you ask Nick or Rob Zanna about their framings of vinyls and what motivates their purchasers, they tell of clients who want all sorts of pop paraphernalia framed, so often vinyls will be accompanied by corresponding programs, posters and plectrums. Or by tickets and drumsticks. The disks will celebrate the first dances at wedding receptions. Or commemorate what was No 1 in the charts when an intended recipient was born. They’ll be reminders of first dates and dances, of music playing when proposals (and babies) were made.

Easyframe already has, as the examples above and below all show, half a dozen standard designs that suit most orders. But it can obviously put together a custom solution for any special order. In respect of options, there’s a huge selection of frames available and we can usually comply with whatever our clients’ wishes are. For those customers who are unsure about frame or mount colours, we can always look at a colour wheel (see https://en.wikipedia.org/wiki/Color_wheel; this is a way to find mount and/or frame colours that should work well with your disks and/or sleeves).

Clients should note that ordinarily orders are not insured although they are despatched via well-known couriers. Any valuable item should be insured. We can arrange that but must charge for it.

These great framings are of disks and sleeves by (from left to right) The Cure, Madonna and Massive Wagons.

In short EasyFrame has become a preferred supplier for vinyl aficionados who wish to preserve mementos of their taste in music, and indeed the soundtrack of their lifetimes, within affordable high-quality frames. Of course disks, being thin and flat, lend themselves to framing! They’re also a low-cost way to brighten up your walls with something that truly means something to you! Indeed, homes and offices apart, some readers might consider that an array of such frames might be a great way to fill otherwise-empty wallspace in pubs, bars, cafes and restaurants, public venues where artists might perform, dance studios and the like.

To see more of what we do with vinyls visit www.easyframe.co.uk/vinyl-framing.

If you want to contact Rob or Nick about framing vinyls and/or other musical memorabilia, EasyFrame is on 01234 856 501 and emailable via sales@EasyFrame.co.uk.

Finally, though, if you are framing anything precious it’s always worth going straight to a professional framer like Easyframe for advice. They will always chat with you and charge nothing for advice.