Élisabeth Vigée Le Brun (1755-1842) This article is about the French painter Élisabeth Louise Vigée Le Brun who, during a lengthy career interrupted by the hiccough of the French Revolution which removed some of the heads she’d thankfully already captured on canvas, depicted many of Eu 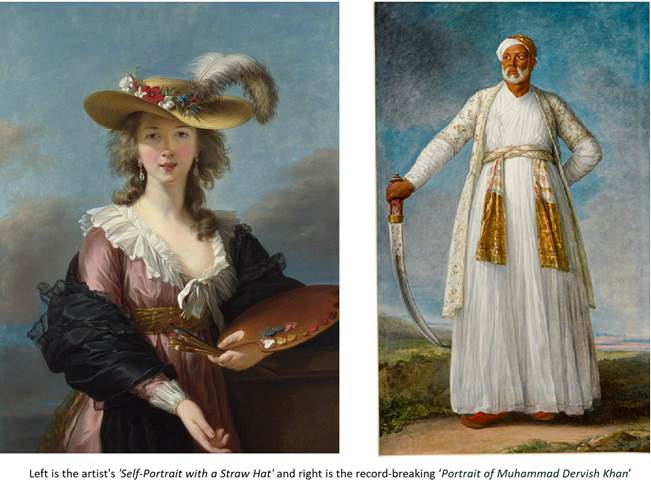 This article is about the French painter Élisabeth Louise Vigée Le Brun who, during a lengthy career interrupted by the hiccough of the French Revolution which removed some of the heads she’d thankfully already captured on canvas, depicted many of Europe’s royals and privileged celebrities. She was, in her time, a mould-breaker for several reasons. And she continues to be. In 2019 her seemingly-modern full-sized work ‘Portrait of Muhammad Dervish Khan’ (above) sold at Sotheby’s for US.2 million (almost exactly Ł6 million at the time), which was then the highest price for work by a female pre-modern artist. Indeed in doing this she simply smashed (five-fold) her own record, held for one of many self-portraits of her. On this basis she is considered to be an ‘old master’.

Élisabeth Vigée Le Brun (which is also written as Vigée-Lebrun sometimes) was born in Paris as Élisabeth Louise Vigée to a mum Jeanne who was a hairdresser and a dad Louis who was a portraitist and painter of fans. Little Élisabeth was initially taught by her dad at a tender age, before she was packed off to a convent when she was only five. She was only able to leave it when she was twelve and her dad died.

Two years later her mum married a wealthy jeweller, whom it seems Élisabeth (now in her mid-teens) despised. Apparently, as she admitted in her memoirs, he committed the heinous crime of wearing her dead dad’s duds without having them altered to fit him. It apparently escaped her that her step-father’s proximity to the royal court, now that she was professionally painting portraits, would put her on the fast-track to recognition.

During this period Élisabeth Vigée was tutored and inspired by four capable French artists:

• Gabriel François Doyen (30 years older, he painted religious and romantic works but decamped to Russia during the French Revolution at the invitation of Catherine II) • Jean-Baptiste Greuze (again 30 years older, he painted portraits but historical scenes and more too; ironically he stood his ground during the reign of terror and painted people like Jean–Nicolas Billaud-Varenne who had a hand in introducing many of Élisabeth Vigée Le Brun’s clients to the guillotine) • Claude-Joseph Vernet (who was 40 years older, a landscape and seascape painter; he died at the outbreak of the French revolution), and • Jean-Baptiste-Pierre Le Brun, whose great-great uncle had been the first director of the French Academy in the reign of Louis XIV, whom she married at 21, and with whom she then embarked on a tour of the low countries where they were both inspired by Dutch and Flemish work. Her ‘Self-Portrait with a Straw Hat’ was one product of that inspiration. 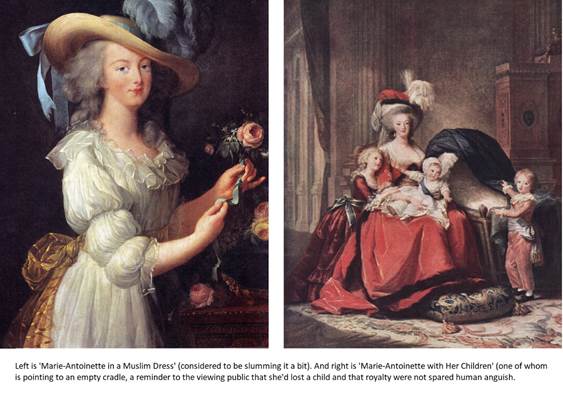 In 1787 Vigée Le Brun’s ‘Self-Portrait with Her Daughter Julie’ caused a bit of a scandal because she showed herself openly smiling (in those days it was considered unseemly to look anything other than as miserable as sin, though it was only a couple of years before the reign of terror would give them something to look miserable about). She actually bared her teeth. This got into the contemporary scandal-sheets. But, in truth, a couple of centuries later the feminist Simone de Beauvoir was giving her grief – this time not because she’d broken an archaic convention but because successful painter Vigée Le Brun had dared to depict herself as if she was a happy wife and mum. You can’t please all the people all the time! 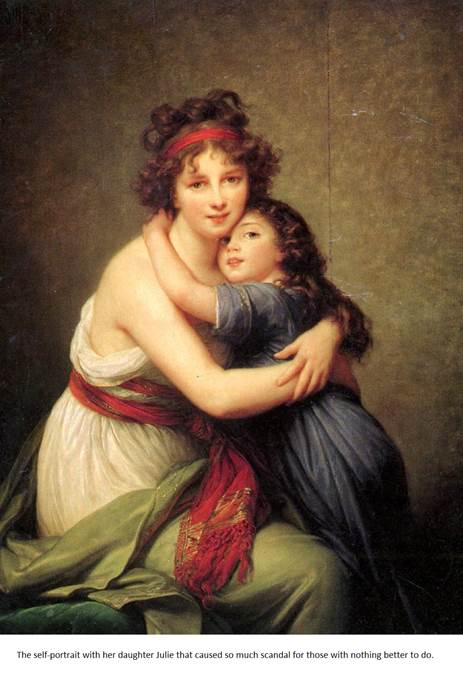 But this silliness may have helped bring the artist to the attention of the royal court. Vigée Le Brun became a frequent painter of the queen, Marie-Antoinette, who was the wife of the doomed King Louis XIV. Working in a style that is described as Rococo (an elaborately-ornamental late-baroque style of art, decoration and architecture commonplace in 18th-century continental Europe) with a touch of Neoclassicism (a revival of Classic style – think ancient Greek and Roman – and impacting on all of the arts), Vigée Le Brun executed at least 30 portraits of her patron. In the main they were attempts to portray the queen as one of the people, and a mum, with simple tastes. As we know, ultimately this PR exercise didn’t convince the masses who were resentful of the wealth and privilege she enjoyed – and as a foreigner (she was Austrian by birth) too. 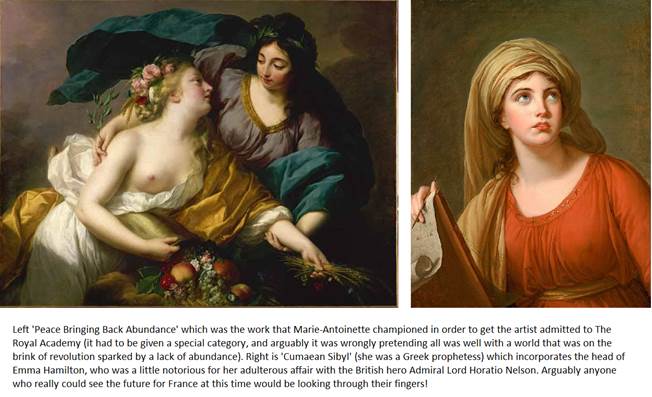 There is clear evidence that Vigée Le Brun was a bit of a mould-breaker and a headstrong woman. Her studio was shut down when she was in her mid-teens because she didn’t have a licence. Undeterred by that she went to the Académie de Saint-Luc, a Parisian guild which exhibited her works without knowing who she was (and, very probably, that they were dealing with a woman). But, at 19, they recognised her talent and made her a member.

This is in context. At the age of 28 she became a member of the Académie Royale de Peinture et de Sculpture (The Royal Academy for Painting and Sculpture), something that only 15 women achieved in almost 150 years. But when the French revolution started in 1789 one of the first things it did was abolish such recognition for female academics. Women at that time supposedly only had one role i.e. to have babies.

Vigée Le Brun also ‘did a runner’, despite being married with a daughter, when the reign of terror started. She quite sensibly realised that any friend of Marie-Antoinette’s was likely to be executed, and had the nerve to leave without her husband (himself a painter and an art-dealer who gamely said she’s gone to Italy to instruct and improve herself, and who lobbied for her to safely return to France 12 years later though by then they were divorced). And she therefore quit France and went on a grand European tour (mostly to Italy, Austria, Russia, France and Switzerland) during which she was rightly in great demand.

Many of Vigée Le Brun’s friends, sitters and patrons were executed during the French Revolution, which ran for a decade from 1789. So she was probably best somewhere else! In Italy she painted several royals including Marie-Antoinette’s sister Maria Carolina of Austria. At that time she also depicted Lady Emma Hamilton as the Cumaean Sibyl. This was the painting of which Vigée Le Brun was most proud.

Moving to Austria she painted both princesses Maria Josefa Hermengilde von Esterhazy (as Ariadne) and Karoline von Liechtenstein (as Iris), very much in a Roman style. In Russia she then painted the former King of Poland, then half of Catherine the Great’s family (she had to add sleeves to some dresses because the empress thought her granddaughters were showing too much bare flesh), and became a member of the Academy of Fine Arts of Saint Petersburg. The artist moved on after 6 years but was unhappy that her daughter stayed on having married a Russian.

She only managed to get back into France in 1802. Though France had been settled for a couple of years there was still a public list of counter-revolutionary émigrés and she needed to be taken off it; her ex-husband was instrumental in achieving this. But once back she continued to travel to Britain (meeting people such as Lord Byron) and repeatedly to Switzerland.

In summary Élisabeth Vigée Le Brun was a truly great female artist who deservedly made it in a man’s world. But that’s been recognised now and her originals are no longer being sold cheaply. So you’d need deep pockets if you want to bid for one of them. But high-resolution fine prints are available. One excellent place to purchase unframed prints of Vigée Le Brun’s work is at www.npg.org.uk/collections/search/portrait/mw120862/Elisabeth-Louise-Vige-Le-Brun (this is The National Portrait Gallery’s site) where they will cost you as little as an immensely-affordable Ł6 a pop.