Diego Velázquez This article is about the Spanish painter Diego Rodríguez de Silva y Velázquez (1599 – 1660). He was essentially a portrait-painter and a 'tenebrist', that is he worked in a style made famous by Caravaggio and where the subjects are in shadows that a

This article is about the Spanish painter Diego Rodríguez de Silva y Velázquez (1599 – 1660). He was essentially a portrait-painter and a 'tenebrist', that is he worked in a style made famous by Caravaggio and where the subjects are in shadows that are dramatically illuminated by beams of light which are usually from identifiable sources.

Velázquez was one of the most important painters during the 'Spanish golden age' (or, more properly, the 'golden century' as in Spanish it's 'El Siglo de Oro'). Though that confusingly only ran from 1492 to 1659 (a period of only 67 years, not 100).

1492 was the year that Christian forces re-took the Iberian Peninsula (i.e. the area of land that is now Spain and Portugal) from the Moors (Muslims). And 1659 was when the Pyrenees treaty ended a long war between Spain and France. So this is an era of consolidation and expansion that saw the growth of the Spanish empire and the rise of the Habsburg dynasty which importantly included the reign of Philip IV (1605 – 1655) for whom Velázquez was the most eminent court painter.

The artist, who had a keen eye as well as the ability to interpret what he saw in brush-strokes, is considered to be a leading light of the contemporary 'Baroque' period. Previously the vogue had been that of 'mannerism', a 16th century style exemplified by artists such as Michelangelo who combined bright colours with distorted perspective and scale. 'Baroque', in contrast, was an era of ornate or elaborate detail - and a desire to create faithful likenesses when it came to portraiture - that prevailed during the next two centuries and permeated not only art but music, architecture, dance, jewellery and more. The palace at Versailles exemplifies the style, as does the work of Vivaldi, Rubens, Handel, Wren and Bach. 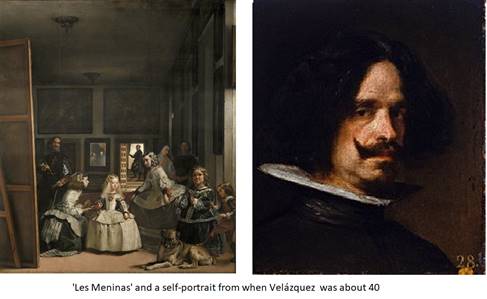 Velázquez's legacy includes perhaps 120 portraits of the Spanish royal family, other prominent Europeans and commoners, though he is probably most famous for the masterpiece 'Las Meninas' (which can be interpreted either as 'lady-in-waiting' or 'maid-of-honour') that he painted when he was 57. That work's currently exhibited at the Museo del Prado in Madrid.

It is worth noting that he had a studio and that there are many other works that may or may not be his (since he rarely signed anything) but which were most probably painted under his direction by students. 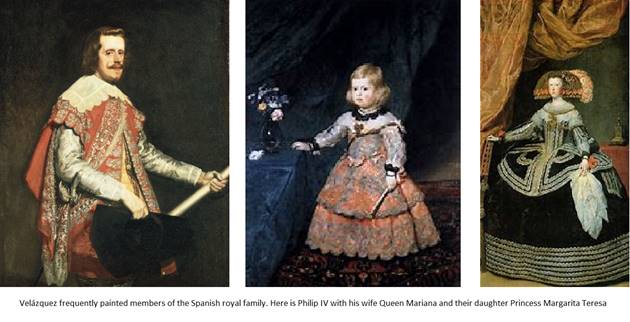 Velázquez was born in located in Seville, Andalucia, Spain to his father Joăo Rodrigues da Silva and his mother Jerónima Velázquez (note that he ended up effectively using his mother's maiden name, as per the Spanish naming custom). His paternal grandparents had seemingly been Portuguese, and were probably itinerant Jewish tradespeople, but in any event the family weren't wealthy. They were, however, god-fearing and young Velázquez was taught philosophy and languages. But he clearly had artistic talents.

Velázquez possibly studied for a short time under Francisco de Herrera (a Venetian-influenced painter and engraver who was about 23 years older than Velázquez) though there is only one uncorroborated reference to this.

In any event Pacheco was apparently not particularly distinguished, and he was an exponent of the rather-dated mannerist style, yet he was a good teacher who schooled Velázquez in not only proportion and perspective but in the classics and more too. Moreover he was the father of Juana, the woman that Velázquez was to marry and with whom he had two daughters though one did not survive infancy. His surviving daughter married the artist Juan Bautista Martinez del Mazo.

What Sort of Chap was Velázquez?

What sort of chap was Velázquez? Well his father-in-law Pachero wrote of him 'After five years of education and training I married him to my daughter, moved by his virtue, integrity, and good parts and by the expectations of his disposition and great talent'. That's a pass for Art, then!

Velázquez was appointed as the court painter in 1623 when Philp IV had only been on the throne for a year and had been unlucky enough to have had Rodrigo de Villandrando, his favourite painter, die. Velázquez had already painted the poet Luis de Góngora the year before but was unable to access royalty until the prime minister Count Olivares, who knew Velazquez because they were both from Seville, got him a gig with Philip IV.

After that other court painters, finding that they were no longer allowed to paint the king, accused Velázquez of being only able to paint heads. This was palpably untrue. He'd apparently executed a masterful painting of Philip IV on a horse in the countryside. But the king, hearing the mutterings, then artfully arranged a competition in which Velázquez and his detractors all had to paint the same historic scene i.e. 'The Expulsion of the Moriscos' (the Moors). Velázquez's work is lost be we know the outcome; he walked it and was subsequently promoted in 1627 as 'gentleman usher to the king'. He was later to be knighted but, to do that, there was a pretence that he'd no Jewish origins.

His father-in-law, Pachero, wrote proudly then that 'The liberality and affability with which he is treated by such a great monarch is unbelievable. He has a workshop in his gallery and His Majesty has a key to it and a chair in order to watch him painting at leisure, nearly every day'. So, in short, Velázquez had made it.

It is worth mentioning that Velázquez might have been painting hidden meanings into some of his work. 'Les Meninas' may, it is said, actually presage the fall of the Spanish Habsburgs.

As we can see, a lot of Velázquez's time was taken in painting the royal family and its entourage. But of course he was a fairly devout man who'd had a religious upbringing and who was living in an age when religion was important. Thus he painted sacred scenes such as 'The Immaculate Conception', 'Adoration of the Kings' and 'Christ on the Cross'. He tended to u

se local people as models. Velázquez also spent some time in Italy, mid-career, on a trip paid for by Philip IV, certainly in part to collect statues for his patron. 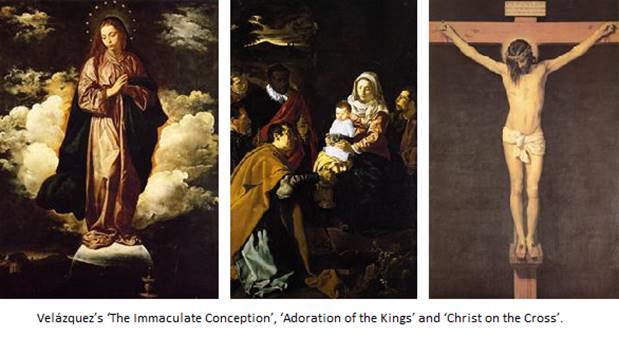 Some of Velázquez's work as had been recreated by the artists including Salvador Dali, Pablo Picasso, Goya and Francis Bacon. And he's said to have been one of the inspirations for the French impressionists, more especially Édouard Manet. He was certainly mimicked by his son-in-law Juan Bautista Martinez del Mazo, whose work has often been wrongly attributed to Velázquez. Indeed only with modern forensic techniques is his true legacy being gradually discovered.

Incidentally, through his daughter, Velázquez is an ancestor of the monarchs of Spain, Greece, Denmark, Sweden, Belgium, Liechtenstein and Luxembourg.

In summary Velázquez rightly is considered a great. Indeed in 1781 Gaspar Melchor de Jovellanos (the Spanish neoclassical statesman, philosopher, author and driver of the 'Age of Enlightenment' in Spain) wrote of Velázquez that 'when he died, the glory of painting in Spain died with him'. 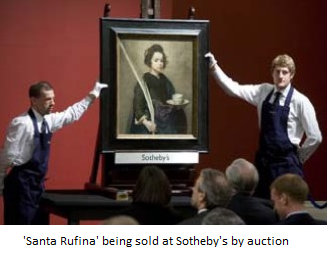 Nobody is expecting you to buy an original. It seems that the most expensive Velázquez to date has been 12.47 million Euros for 'Santa Rufina', paid back in 2007 at Sotheby's in London. So you'd need deep pockets. But high-resolution fine prints are available. One excellent place to purchase unframed prints is at the National Gallery shop's dedicated page for Velázquez at www.nationalgallery.co.uk/products/velazquez.