Going Up the Wall with British TV Memorabilia It may not surprise you to know that EasyFrame has been responsible for framing thousands of pieces of memorabilia. Though you might be unaware that, as huge fans of the eternally-popular ‘Only Fools and Horses’, EasyFrame’s owners have developed a v

Going Up the Wall with British TV Memorabilia

It may not surprise you to know that EasyFrame has been responsible for framing thousands of pieces of memorabilia. Though you might be unaware that, as huge fans of the eternally-popular ‘Only Fools and Horses’, EasyFrame’s owners have developed a very special relationship with the fan-club that services a nation’s perennial obsession with a legendary British comedy institution. In that capacity EasyFrame has framed endless signed collectibles and merchandise galore during the last 20 years.

This article looks at some of the other great British TV institutions, focusing on family entertainment, and tells you where you can source memorabilia that’s suitable for framing.

Forget the atrocious recent incarnation which would have had Gerry Anderson rolling in his grave. I speak of the Supermarionation shows made from 1964 to 1966, with puppets that all had heads a quarter of their body length. (In real life, except for Lionel Richie whose proportions are very much those of a Thunderbird puppet, heads are a sixth of body length.) The site at https://fanderson.org.uk/ is the world’s only official fan-site for Gerry and wife Sylvia (who was behind a lot and voiced Lady Penelope). You can go to eBay as always to find Thunderbirds memorabilia, and I recommend www.ebay.co.uk/b/Thunderbirds-1960s-TV-Movie-Character-Toys-with-Vintage/2624/bn_7078041661. You should also definitely visit https://shop.gerryanderson.co.uk/collections/prints.

It’s hard to credit but Doctor Who has been running since 1963 and I actually remember watching the first episodes on a grainy black-and-white television. Since then we’ve seen 13 doctors but that doesn’t seem to be bad luck because the show is going from strength to strength. The advantage of such a long run is that there’s lots of memorabilia out there which you can collect. The BBC run a Doctor Who fan-club which you can join at www.bbc.co.uk/cbbc/joinin/doctor-who-fan-club but there is also the long-running Doctor Who Appreciation Society that has a site at www.dwasonline.co.uk/ and a well-established Doctor Who shop at www.thewhoshop.com/. 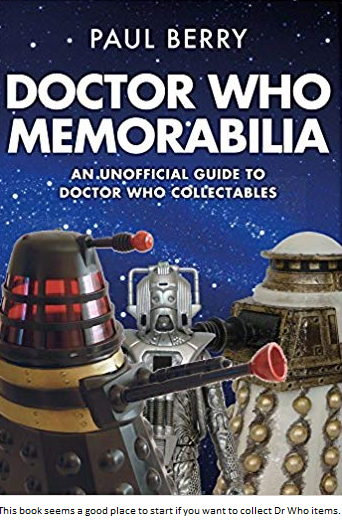 If you’re a huge fan of the Blackadder dynasty, as I am, then the best site appears to be at www.blackadderhall.com/ where you’ll realise that speculation abounds that the series is set for a revival. In the meantime there are lots of frameable items available, not least at www.redbubble.com/shop/blackadder and www.cafepress.co.uk/+blackadder+gifts. But, as ever, you’ll be able to find unique items such as scripts available online if you search for them.

It only ever ran for two series but Fawlty Towers is widely considered to be the best comedy series that the BBC ever ran. No there will never be a revival but, since John Cleese is eternally funding his ex-wives and makes no secret of that, there are plenty of collectible items around with which you can grace your walls. The item below commemorates the unforgettable episode when Basil Fawlty feels forced to give his car a damned good thrashing. See www.originalmemorabilia.co.uk/'a-damn-good-thrashing'~347. Unframed items abound and you can even buy them on Amazon – see www.amazon.co.uk/BASIL-FAWLTY-TOWERS-UNFRAMED-CANVAS/dp/1000003760. 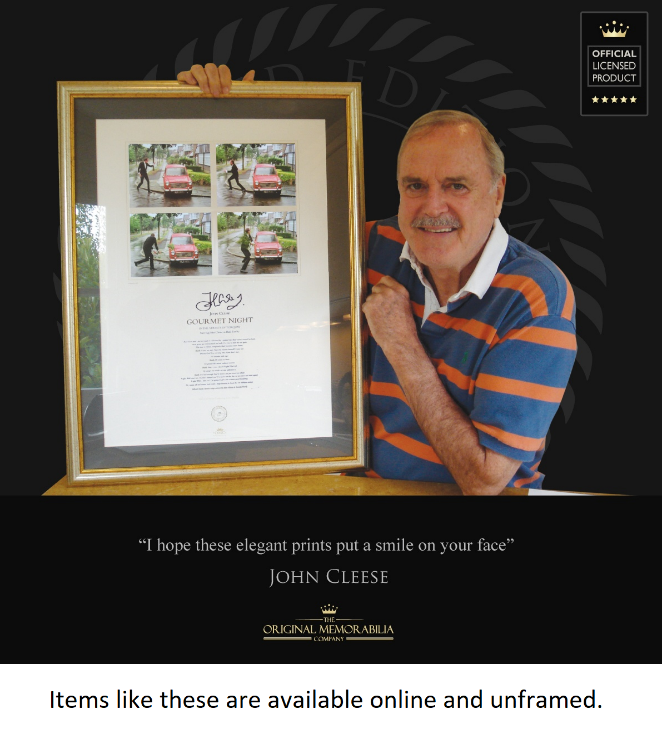 If the humour and camaraderie of the Second World War is your bag, and Dad’s Army continues to have a following that led to quite a good feature film being made recently which was true to the original, then you may like to collect items related to the series or to the Home Guard itself. The Dad’s Army Appreciation Society runs a site at www.dadsarmy.co.uk/ and there is no end to Dad’s-Army-related merchandise at places like www.english-heritageshop.org.uk/gift-ideas/gift-ideas1/dads-army and even on Amazon at www.amazon.co.uk/Walmington-Sea-Guard-Training-Manual/dp/1409128210/ref=sr_1_5?keywords=dads+army+gifts&qid=1578838802&sr=8-5. 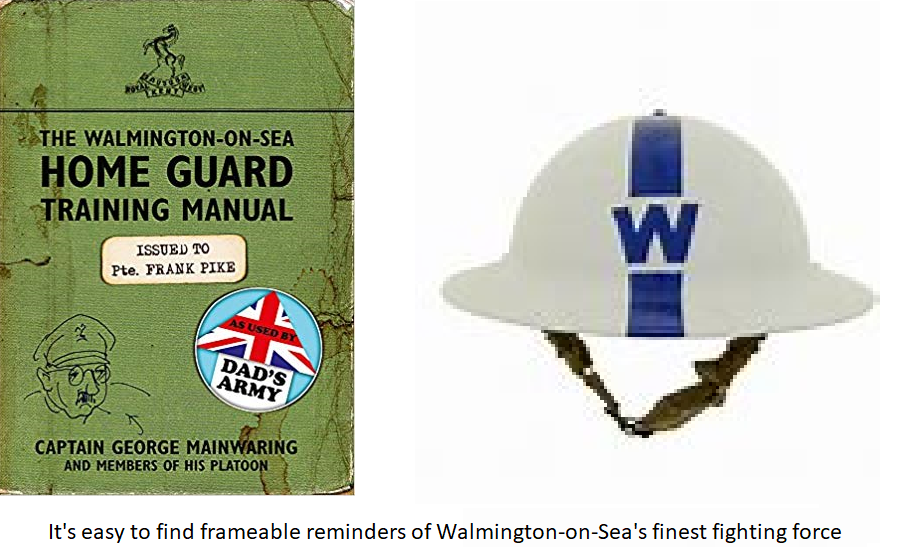 We’re all tempted sometimes to drop out. And in the late 70s (Jesus that’s almost 45 years ago) Tom and Barbara Good did just that, seizing on the opportunity presented by Tom’s 40th birthday, and in doing so creating 4 series of classic comedies that stand up well to any number of re-runs. Indeed The Good Life is a Christmas perennial, like Only Fools and Horses, and another comedy classic that made a star of everyone in it. If you want to refresh yourself in respect of the details you could start by looking at www.bbc.co.uk/programmes/b00732tl and http://thegoodlife.flyingdreams.org/. 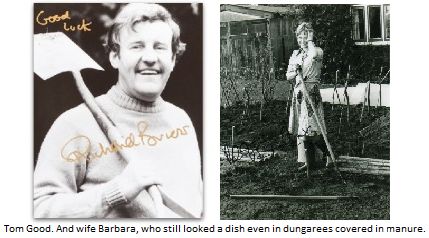 If you cast around you can still find great memorabilia from The Good Life. One example is at www.rutlandautographs.co.uk/tv-comedy/the-good-life-1111177900.html. Another is at https://www.ebay.co.uk/itm/Felicity-Kendal-Signed-Photo-Barbara-Good-in-The-Good-Life-E44/263640513947.

One of the reasons why Ronnie Barker’s (and Richard Beckinsale’s) Porridge remains timeless is that it was set in a prison. They’ve hardly changed since Victorian times and not much since 1973 when the first pilot was aired, never mind 1977 when it finished (though there was a film in 1979). Porridge made stars of Richard Beckinsale (who sadly died in 1979 at 31 of a heart attack) and Fulton Mackay. There is a fan-club site at www.porridge.org.uk/.

EasyFrame has become the preferred supplier for one of television’s most bankable assets. And its resources make it a go-to for other fan-clubs that would like to provide their aficionados with affordable high-quality frames.

It is always worth asking EasyFrame if they can help you to develop a service for your fan-club or appreciation society, but if you do then you’d be best armed with approximate numbers, likely dimensions, expected lead-times and a verifiable copy of any prices that you might have been quoted elsewhere. They’d aim to out-perform rivals on any like-for-like basis. Certainly their state-of-the-art machinery should ensure that every precious memento is kept in pristine condition, and they are a delight to view, for decades.

Finally, though, if you are framing anything precious, whether it’s a memento of great TV or something entirely different, it’s always worth going straight to a professional framer like EasyFrame for advice. They don’t need to sell something every time they take a call and will be happy to chat with you. To that end EasyFrame is on 01234 856 501 and emailable via sales@EasyFrame.co.uk.