The Art of Ronnie Wood, Rolling Stone This article is about the Ronnie Wood, best known in recent decades as a rock guitarist with The Rolling Stones though formerly he was with The Faces and The Small Faces (so he worked with Rod Stewart for years) and likewise he performed with Bob Dyl

This article is about the Ronnie Wood, best known in recent decades as a rock guitarist with The Rolling Stones though formerly he was with The Faces and The Small Faces (so he worked with Rod Stewart for years) and likewise he performed with Bob Dylan, Jeff Beck, George Harrison and other rock legends in several ensembles. He’s written a couple of rock-and-roll memoires (with lines like ‘We were barred from so many hotels, the entire Holiday Inn chain, that we had to check in as Fleetwood Mac lots of times’ he’s won a deserved reputation as a raconteur). Oh, and he’s won three prestigious Sony Music Awards for his own shows too. And, in the meantime, he was inducted into the Rock and Roll Hall of Fame twice.

But Ron Wood is much more than just a globally-admired musician, writer, storyteller and radio personality. He’s a damned fine artist too, one who was classically trained at Ealing Art college, who has mastered an array of genres, whose decades spent as a pop-star have given him unique access to exclusive sitters, and whose works sometimes sell for hundreds of thousands of pounds apiece. Indeed he has won over the critics. Because even Brian Sewell, bless him, described Ron Wood as ‘an accomplished and respectable artist’.

So, in summary, we look at Ron’s artistic career and point you towards signed limited-edition prints that you can easily and affordably acquire in the certain knowledge that you’ll own a little of the legacy of a genuine modern multimedia genius.

Ron Wood came from what many would wrongly expect to be an impoverished background, with the family being itinerant barge-dwellers and supposedly gypsies. Yet seemingly, by all accounts, it was pretty middle-class and clearly he was actually privileged not only in respect of his genes but the encouragement that he was given by his parents and elder brothers. As a child his drawings featured on BBC TV’s ‘Sketch Club’ and he won one of its competitions, then went to Ealing Art College (which Freddie Mercury and Pete Townshend also attended) along with two of his brothers who were graphic artists as well as musicians. His dad, incidentally, was a musician too.

Ultimately Wood dropped out of art-school in order to pursue a musical career that was illustrious enough to get him into the Rolling Stones in 1975. So, on the balance, the lad did well. And, since he’s supposedly worth over Ł100m though that must rise every time Mick and Keith break out the Zimmer-frames and bath-chairs to go on tour, he can presently afford to spend a little time on a first love that he never abandoned entirely. I say that because he’s always pursued his art offstage. So he’s put the hours in, far more than he would ever have done had he stuck it out at Ealing, and it shows.

Inspired, he says, by Picasso, Matisse and Van Gogh, his paintings, drawings and prints often feature popular icons and he exhibits all over the world though he has long-standing relationships with San Francisco Art Exchange and the ‘Scream’ gallery in London which he co-owns. He’s collaborated artistically with some of those icons, so for example he created the cover for Eric Clapton’s ‘Crossroads’ and has painted for Andrew Lloyd Webber as well as The South Bank Show which gave him an exhibition. 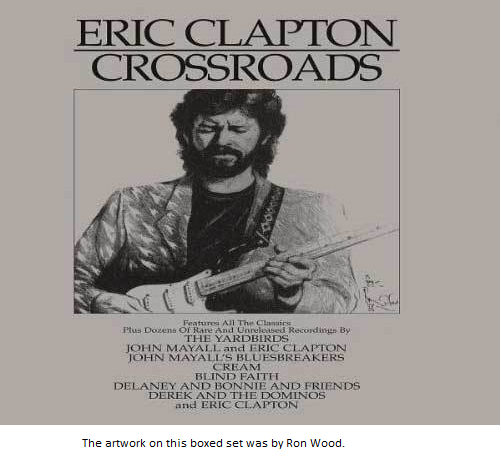 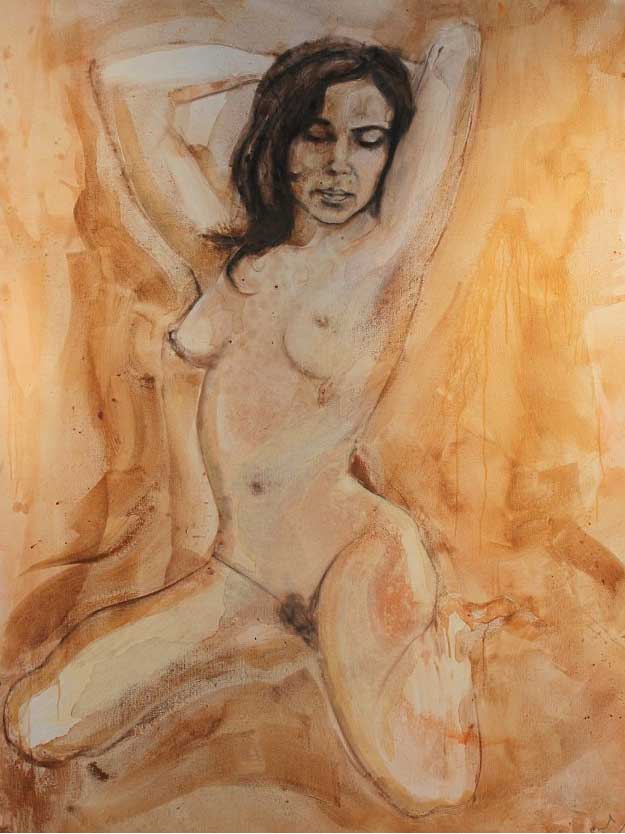 On the Picasso he is cited as saying:

‘I call it The Picasso Stones. It’s my interpretation of Picasso’s painting The Three Dancers. Looking at the original, I was inspired to do my own take featuring the boys*. I did a few versions and each one was slightly different and more honed than the last. I had great fun doing it. Picasso did his own take on a lot of artists but I bet he never thought no one (sic) would ever do a take on him. I hope and think he’d be flattered, but also a bit shocked and pleasantly surprised at my take on his work’. 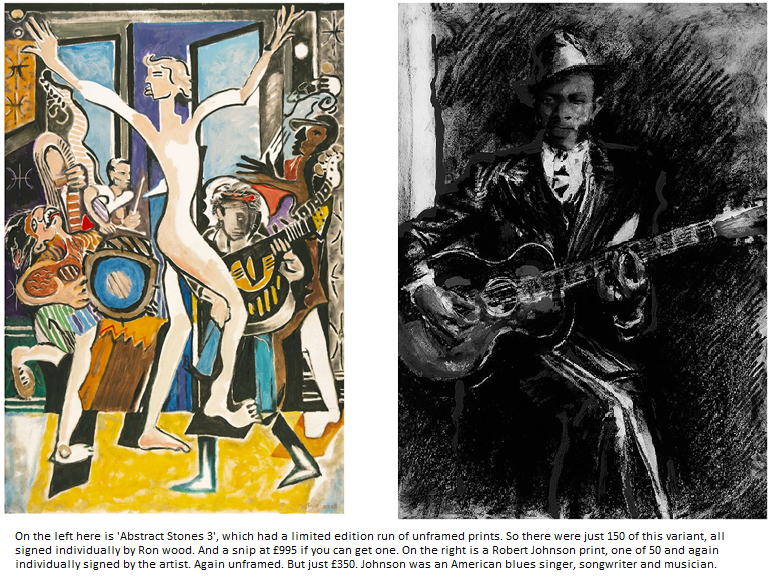 Ron Wood himself is a mere lad at 71 and, despite decades of well-documented self-abuse, he has taken pains to look after himself in recent years and it’s to be hoped he’ll therefore have plenty of time to add to his already-burgeoning canon of work. 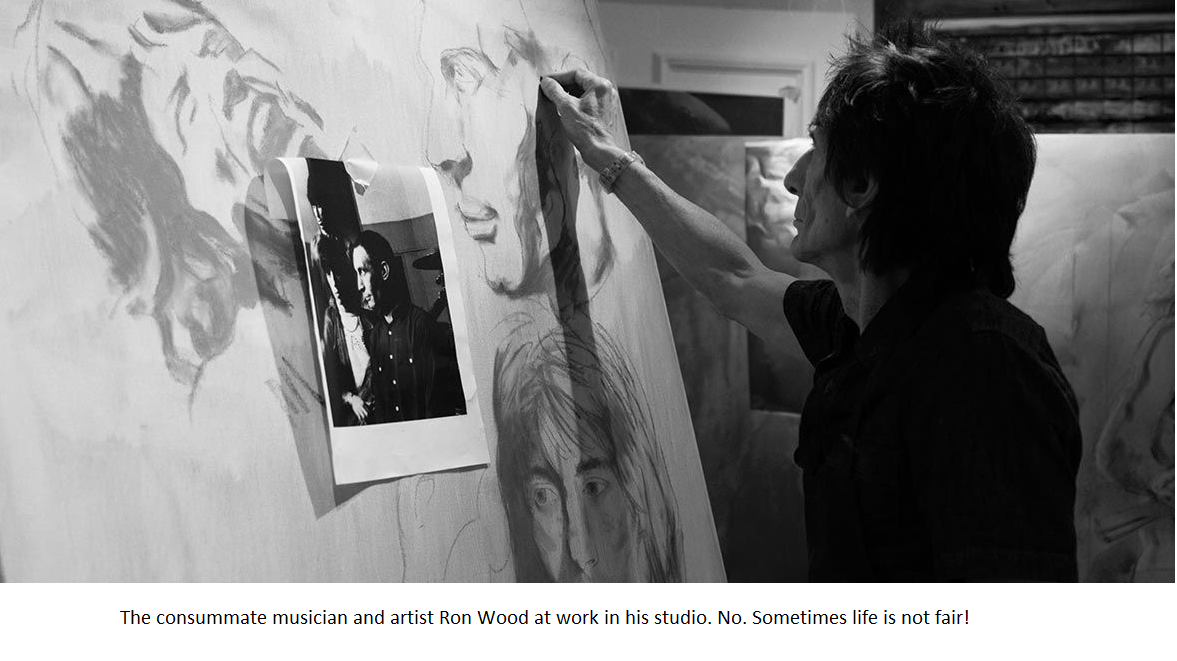 Ronnie Wood’s work will endure in its popularity. And a signed print is, surely, absolutely certain to do a lot more than simply retain its value. 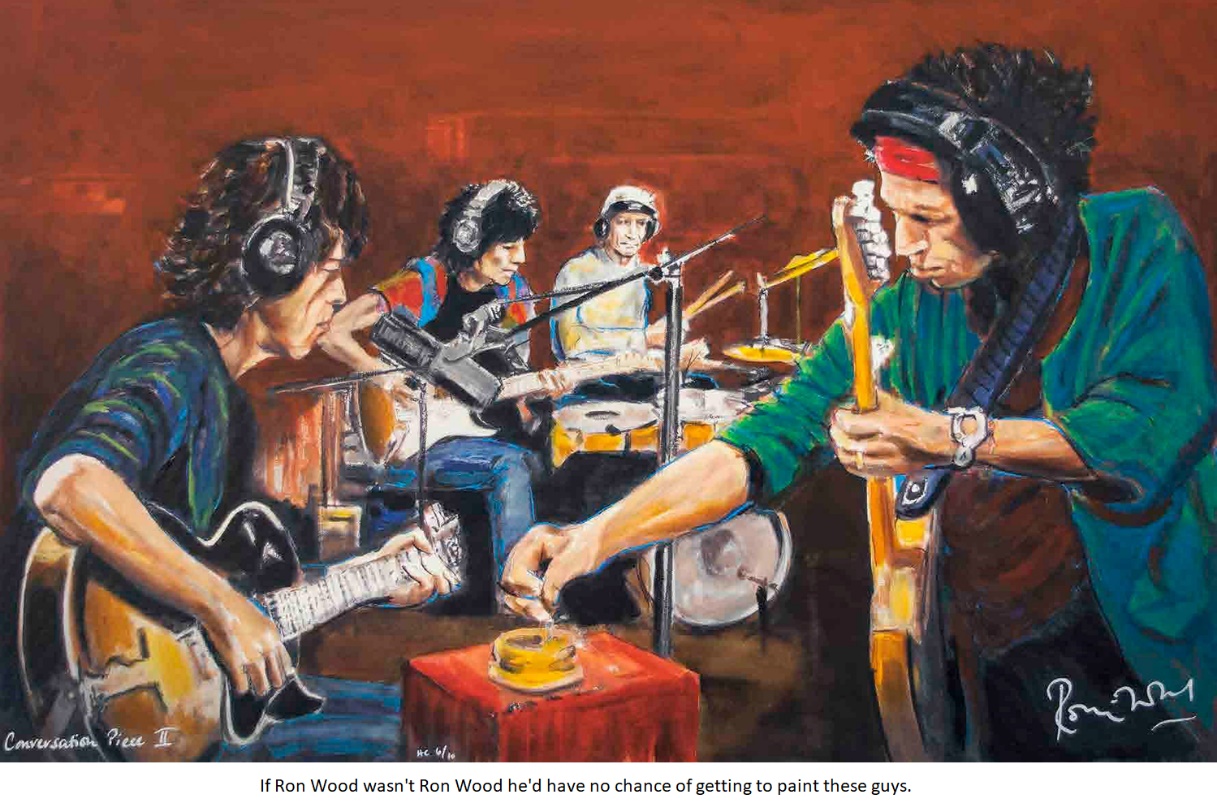 To find out how to obtain his work go to www.castlefineart.com/artists/ronnie-wood or https://shop.ronniewood.com/*/Art/ (which is the official Ronnie Wood online art shop) where it is possible to purchase unframed prints, originals, and much more. 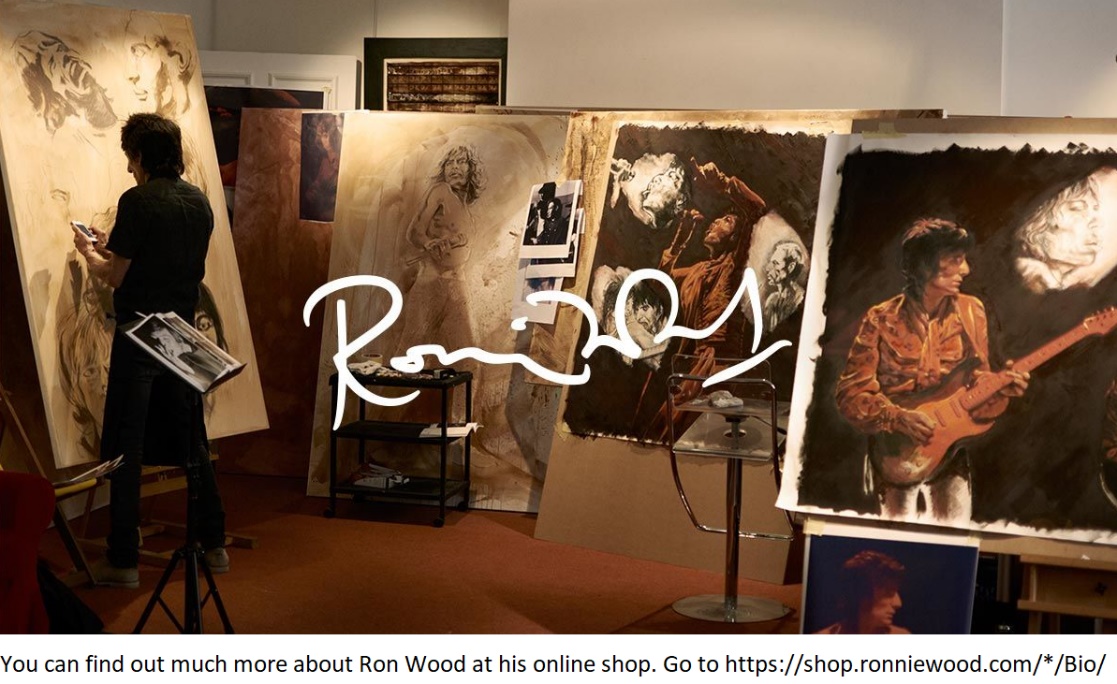 If you buy any of Ron Wood’s prints you’ll almost certainly need them framing and it’s best to have collections framed by just one supplier with matching frames. Unless you know your stuff when it comes to picture frames and mounts it’s always worth going to experts. EasyFrame is an obvious and affordable supplier, whether you want to source all you’d need to do the job yourself or have them do it for you.