Stop Motion This article is intended to inspire readers to consider how they might create intriguing stop-motion sequences that may be displayed, along corridors or similar, to educate, inform and amuse their audiences.

Start an Entire Movement on Your Walls.

This article is intended to inspire readers to consider how they might create intriguing stop-motion sequences that may be displayed, along corridors or similar, to educate, inform and amuse their audiences.

Actually the intention is also to show you how you can start your kids on a project that will keep them amused and quiet for weeks. A project that can then produce a series of stills which you can frame and display for posterity even if none of your offspring turn out to be the next Nick Park.

To understand how stop-motion started we need to think of what was termed ?moving pictures?. The very first known example of stop-motion came in 1897 (the first photographs had been created in 1814) when Albert E. Smith and J. Stuart Blackton were credited with making ?The Humpty Dumpty Circus? in which the ringmaster, acrobats and animals in a toy circus came to life. Together with partner William Rock, Smith and Blackton had founded Vitagraph Studios, aka The Vitagraph Company of America. And it went on to be a prolific silent-film production unit that was later bought by Warner Brothers.

In fact Blackton had been working as a reporter when he?d met Thomas Edison. Edison flogged him a newly-invented film-projector and some film. Blackton and Smith saw the potential. And they cheekily set up as rivals to Edison himself, though they really made their names initially by filming the Spanish-American war of 1898 (I should mention that some of the films from this era were re-enacted propaganda rather than genuine action, so the pair may have been guilty of the same). A few years on and Edison started suing others for using his invention and Blackton duly bought a licence rather than be caught in the cross-hairs, but it seems that effectively Edison limited the production-companies using his system to less than a dozen.

We could take a step back. Because, actually, before Edison there were several devices that likewise created the illusion of animation. They did this by utilising sequences of photographs or drawings in ways which fooled the human eye into connecting a series of stills to see them as continuous and progressive movement. The zoetrope was one such system. Its name was given it by William George Horner (1786 ? 1837), a mathematician and classics specialist who took the Greek for ?life? (i.e. ?zoe?) and ?turning? (i.e. ?tropos?) to describe a system that seems to have been based on something called the ?phenakistoscope? (fascinating in its own right; see https://en.wikipedia.org/wiki/Phenakistiscope). In fact the origins of the zoetrope may have been from 1st century China. But 5,000 years or more before an Iranian earthenware bowl was decorated with scenes depicting a goat jumping towards a tree and eating its leaves. The effect may have been unintentional but apparently it gives the impression of movement when spun.

Eadweard Muybridge (no, that?s not a typo, though he was born Edward James Muggeridge and he lived from 1830 to 1904) was an English-born photographer who is credited with making pioneering studies that recorded motion using photography. He learned the wet-plate process, and used it in the USA to take photos of Yosemite which made him famous, after a stage-coach crash left him with serious head-injuries. Those head injuries may have actually left him better at 3D visualisation, though they also made him very eccentric. The name may have been just one example of that. And he was at one point in serious trouble for shooting and killing his wife?s lover, a major, though a court decided it was entirely justifiable.

A decade before Smith and Blackton were making ?The Humpty Dumpty Circus? Muybridge was using multiple cameras to capture motion. Such sequences were to help the public to understand how movement occurs. He also developed a device called the zoopraxiscope which predated the flexible perforated film used in cinematography (see www.flickr.com/photos/library_of_congress/13624640103). 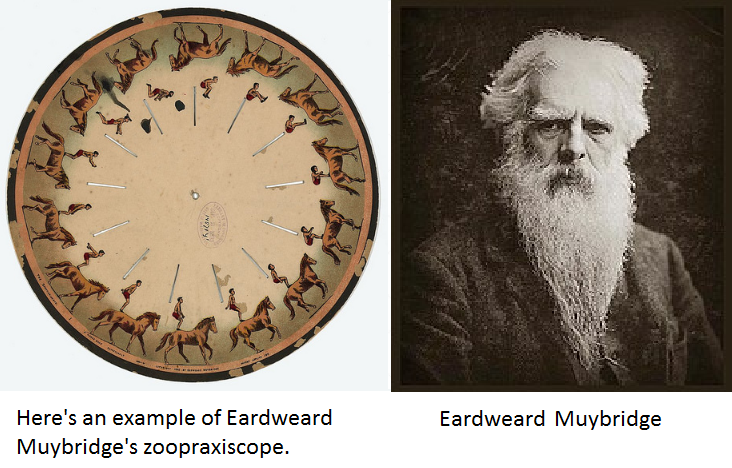 The human eye was assumedly developed for life on the savannah. It?s very good at sensing objects on its periphery, probably objects that would pose a risk of eating the eye-owner, but objects that can only move so fast. Yet (in yet another example of God?s propensity to over-design and over-deliver) it can actually process something it sees for just 13 milliseconds (a capacity which led to the use of subliminal advertising which is now illegal). We can certainly detect 1,000 frames per second (FPS). But what may be more important here is that an image only stays on our retinas for about a sixteenth of a second. And the commonly-used refresh rate is apparently 30 FPS (so that?s 2 per sixteenth of a second) except in action sequences.

But with that in mind, Muybridge captured 100,000 images of moving humans and animals, enabling us to better understand what occurred in complex motion (as with racehorses; see below). 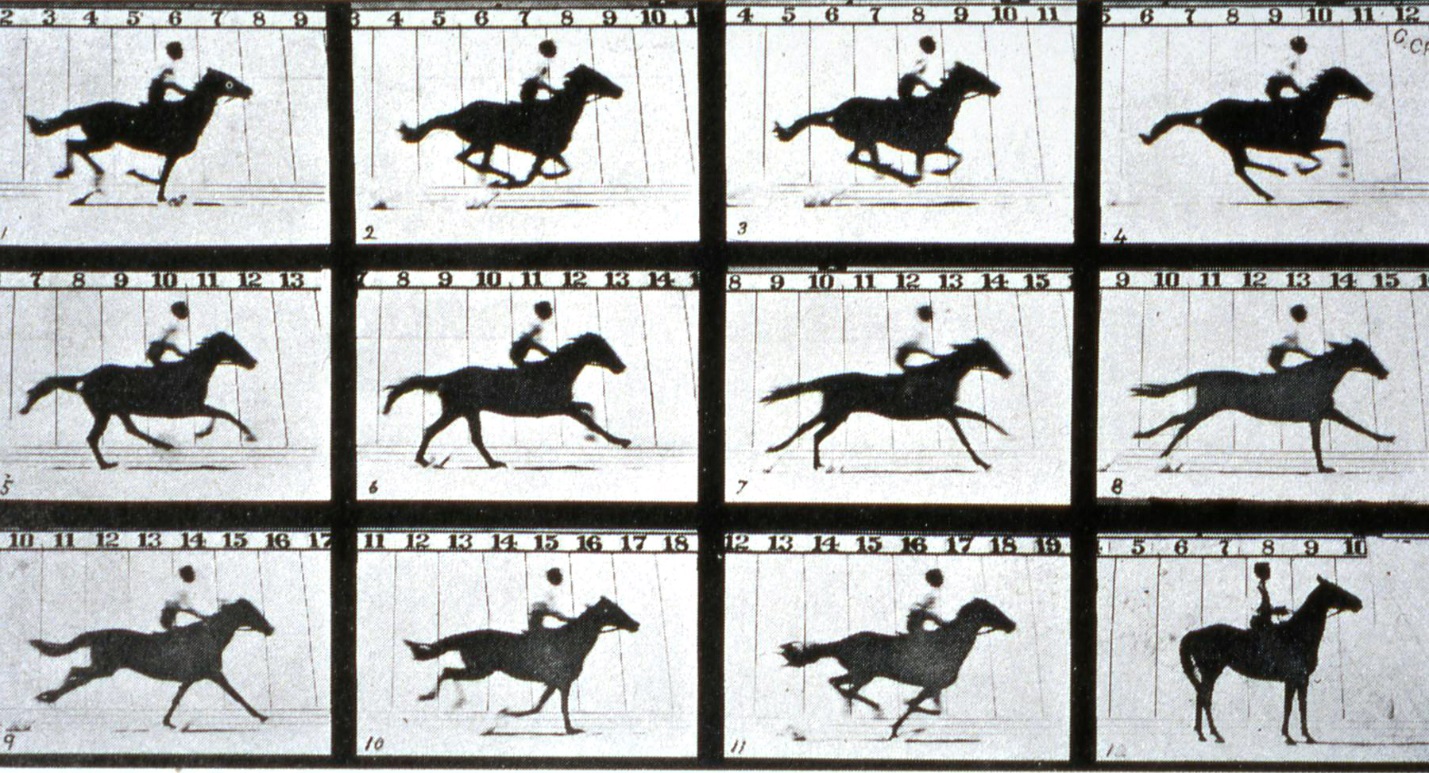 A Opportunity to Get Your Kids Involved

Stop-motion is a great way for children to be creative, and it?s something that will develop not only their creativity but their eye for detail, their ability to plan, and their patience. You can put together some sequences using plasticine or simply paper. Or other expendable materials around the home.

Your stop-motion sequence (or, obviously, one that your kids create) would enhance the ambiance in any home, public building or office.

You?ll need the entire sequence framing first. EasyFrame is an obvious and affordable supplier, whether you want to source all you?d need to do the job yourself or have them do it for you.