MUCHA Did Just About Everything! Moravian-born Alphonse Mucha is credited with being the initiator of Art Nouveau during his long sojourn in France, though in truth he didn't think much of the movement and would probably baulked at the idea of having been responsible for it. The tit

MUCHA Did Just About Everything! 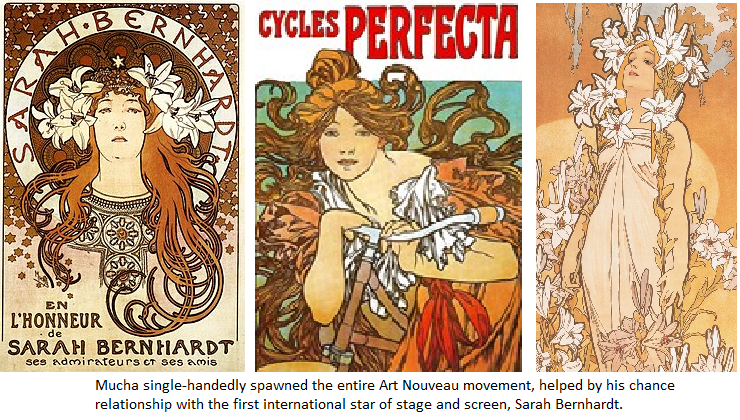 Moravian-born Alphonse Mucha is credited with being the initiator of Art Nouveau during his long sojourn in France, though in truth he didn't think much of the movement and would probably baulked at the idea of having been responsible for it. The title of this article, which is a nod to William Shakespeare's 'Much Ado About Nothing', reflects the fact that Mucha had his fingers in a whole baker's tray of pies. He had the good fortune to be an incredibly versatile multimedia talent whose career profited from his repeatedly being in the right place at the right time. Yet ultimately Mucha's luck ran out when he found himself back in his birthplace - by then Moravia had become Czechoslovakia - and an early victim of the Nazis. This article offers a quick run-through of the key events and influences on his life, pauses to flag up some of the quite-remarkable-yet-disparate projects on which Mucha expended his formidable talents, and explains why his poster-work is indubitably worthy of acquisition then framing for display in your home or workplace.

The son of a court usher and a miller's daughter, Mucha was educated as a chorister and was subsequently religious as well as a lover of music. Moreover he was a skilled draughtsman though even from the early days he coupled his artistry with his other passion - one which was for the burgeoning Czech nationalism that was to result in the formation of Czechoslovakia in 1918 at the conclusion of the Great War. So most of his early work comprised of posters and flyers to advertise patriotic rallies. Mucha's first regular employment appears to have been on theatre scenery in Moravia. He then went off to Vienna at the age of 19 to do the same when he was sniffily rejected by the Academy of Fine Arts in Prague (some noggin there advised him to go and find another career). In Vienna he met mural-painter, Hans Makart, who recognised Mucha's potential and nurtured it, and started to use photographs to plan pieces. Sadly the theatre burned down and Mucha returned to Moravia penniless. Though luckily for him he soon enjoyed the patronage of Count Belasi, who engaged Mucha to paint murals and more at his castles in Gandegg and Emmahof (where sadly much of Mucha's work was again lost in a fire). The count was to sponsor Mucha for the next decade, enabling him to travel widely in Germany, France and Italy in order to study art and to develop his abilities. Indeed Mucha was to settle for a time in Munich and work on religious paintings as well as on nationalist publications to be circulated in Prague, though he had to leave Germany before the end of the 1880s owing to the growing hostility towards foreigners which was of course to fuel two world wars. Mucha was rather thrown when he lost Count Belasi's patronage. Though, in all fairness to Belasi, this was when Mucha had already studied in two Parisian art-schools and thus was in danger of becoming a perpetual student. So he was on his uppers but fellow Slavs helped him, as did a landlady who'd take artwork in lieu of rent. Gradually Mucha won regular work providing illustrations for magazines and books, using the income to not only pay his dues but buy a harmonium and a camera so he could continue to indulge his loves of music and photography. 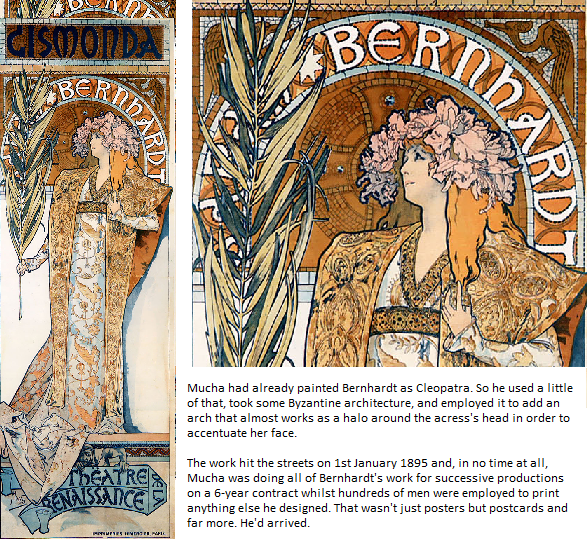 But Mucha's career really took off by chance in 1894 when international stage and screen star Sarah Bernhardt, whom Mucha had already painted as Cleopatra, needed some print ads designing quickly because a production was unexpectedly to be extended. All of the usual poster-artists were on their Christmas holiday so Mucha was asked by her printer to cobble something together to advertise Bernhardt's role in ?Gismonda'. Mucha went for a life-sized-plus poster with an arch over the actress's head, very little detail except for her name, an orchid headdress, and pastels rather than strong primary colours. Bernhardt loved it, bought thousands, had quite a few more versions designed on the same theme, and they were suddenly all over Paris (though, with admirable foresight, Bernhardt kept some back to sell as collector's pieces). Moreover the actress's global reach ensured that Mucha was to later enjoy recognition in America and elsewhere. Clients such as Nestle jumped on the bandwagon, with others notably including Mo?t & Chandon as well as Job cigarette papers and Perfecta bicycles. Mucha's work also flogged brandy, chocolate and beer. 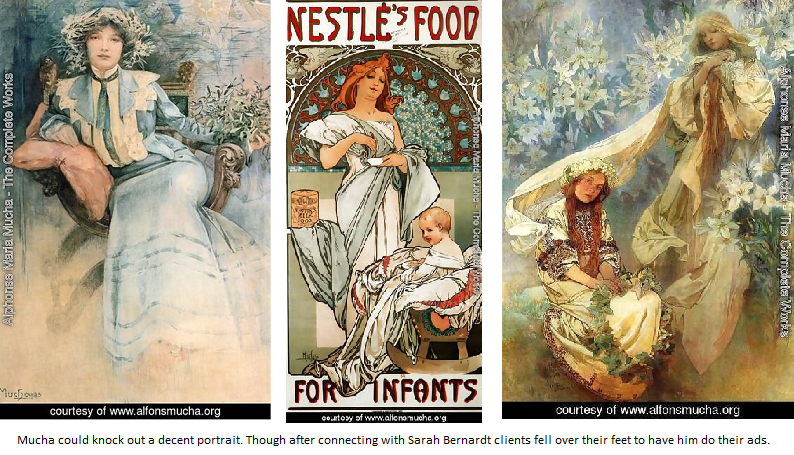 A lot more work followed, mostly featuring beautiful young women in diaphanous dresses amongst floral settings. On the back of this Mucha earned recognition all over the world and an exhibition of his work travelled to New York, London, Vienna, Prague, Munich and Brussels. Doubtless it ruffled some feathers in Prague (remember that in Prague it had been suggested he wasn't an artist?)

Art Nouveau, a movement that swept the world, really took off with the Paris Universal Exposition in 1900. Yet it did so on the back of Mucha. He was responsible for colossal murals there. Some of them focused on the history and future of the Slavs he loved. Yet he also created a menu for the Bosnians, ads for jewellers as well as perfumiers, religious imagery and posters for the Austrians. Indeed on his say-so the Eiffel Tower was never taken down as had originally been planned at the end of the show (though his plan to adapt it was never taken up). Many more series of posters and murals followed. Though this was just the beginning of his prodigious output. Mucha was to go on to design not just jewellery but outlets, porcelain, furniture, decorative panels and enamels. He'd also spend time in the USA, where he found another patron in philanthropist Charles Richard Crane, teaching in several prestigious establishments. It's also worth mentioning that he even designed stained-glass windows, a development which one could well have anticipated as a next step given the distinctive compartmentalisation of colour already evident in his poster-work. Likewise he worked on illustrated manuscripts - on Gospels (remember his religious education?) And it's easy to imagine him sitting, in another era, amongst the monks on Lindisfarne to work on vellum.

Remember the reticence in Prague? He overcame that. Mostly. In 1918, at the end of the Great War (or World War I, as it was to later be known), Mucha was sought out to design the stamps for the new Czechoslovakian Republic. A billion were printed yet Mucha only asked for his expenses. Then he was to design the new Czech banknotes (he did this cheekily featuring Crane's daughter as the model on the 100 koruna note shown below!) He designed a coat of arms too. And Mucha even designed the uniforms for the new Czech police-force. But not everyone appreciated him. When he pitched up to work on architectural projects there were objections to him being given precedence. But by then every other creative in Czechoslovakia must have been a little piqued at his ubiquity.

Sadly in 1939 Mucha, who was by then 79, was rounded up by the Nazis who realised that he had the authority to be a disruptive political activist. Although Mucha was subsequently released the damage was done; he died shortly thereafter from pneumonia, making the Czech one of the first victims in a country that they were soon going to overrun.

Mucha was a total and unalloyed genius whose work is timelessly elegant. You can very easily acquire his prints and we'd recommend you look at www.alfonsmucha.org. It would all look great on your walls. But you'll need picture frames first. EasyFrame is an obvious and affordable supplier, whether you want to source all you'd need to do the job yourself or have them do it for you. Any good framers will be able to show you a vast range of different solutions and advise on what might be the most suitable given the work and its proposed location.