Hello, hello, hello. What have we here? John Constable ranks alongside Thomas Gainsborough and JMW Turner as being one of Britain?s most famous landscape painters and his work currently commands incredible prices though, in his day, it was hard to shift. He came along at a time when Britai

John Constable ranks alongside Thomas Gainsborough and JMW Turner as being one of Britain's most famous landscape painters and his work currently commands incredible prices though, in his day, it was hard to shift. He came along at a time when Britain had hitherto been rather too reliant on imported work from foreign artists and he focused on a genre that was always going to be a tough market because he had to overcome prejudices about subject-matter. As his predecessor Joshua Reynolds had said, 'A mere copier of nature can never produce anything great'. Moreover the adult Constable lived and worked in an era that corresponded pretty exactly to the Industrial Revolution, so he occupied a window of opportunity during which he was able to record landscapes that were already beginning to change beyond recognition. (He lived from 1776 to 1837, whilst the Industrial Revolution lasted from 1760 to 1840.)

This article explains why Constable was far more than a painter of nondescript chocolate-box scenes and most definitely somebody who avoided a formulaic approach to art. It will outline the immense changes that both funded and drove his work, and proffer an insight into the man himself. Moreover it is intended to win sufficient admiration in his artistry to encourage you to invest in a couple of prints (or originals, if your pockets are deeper than mine) to have framed and hung on your walls. 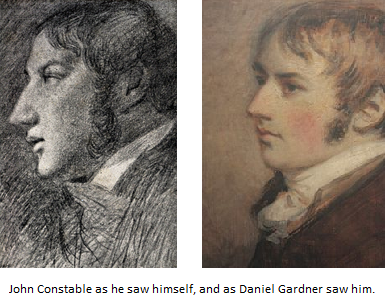 Why Constable was a little unprecedented

As mentioned, Constable was a bit of a ground-breaker. During the 17th and 18th centuries (and up until the Napoleonic wars which commenced in 1803 and ran until 1815) it was the norm for the 'monied' (i.e. those with some brass, and they were usually male) to take the so-called 'Grand Tour' and enjoy a liberal education. This would inevitably be by horse or carriage, taking in Paris, Venice and Rome at the very least. Very often these 'bon viveurs' would subsequently pitch up on Blighty's shores, having survived their rite of passage (poor Percy Shelley the poet being an obvious exception), with art and artefacts that they'd acquired en route. So these sojourns were to facilitate the import of a lot of masterpieces from overseas though in truth we had already been reliant on foreign talent because the royal courts had long employed artists such as the 17th century Flemish baroque court painter Anthony van Dyck who painted Charles I and, before him, the 16th century German northern renaissance artist Hans Holbein (the Younger) who painted Henry VIII. This sort of willingness to hire mercenary brush-and-palette-wielders (and an eclecticism bordering on pillaging) has gone on for aeons and explains why the Queen currently boasts 550 or so works by Leonardo da Vinci (the Earl of Arundel's family gave them to Charles II in the 17th century). So there were hitherto not that many great home-grown British artists. And ironically Constable was, despite his means, a stay-at-home who never ventured overseas though that of course would not preclude foreign influences. Certainly he was inspired as a young man by work he'd seen painted by Claude Lorrain who was a 17th century French artist who'd worked for most of his life in Italy.

Constable?s dad was a wealthy corn merchant who even owned a ship so his son John was going to have the advantage of familial patronage. John?s big brother was mentally incapacitated but his little brother was prepared to take over the family business. And that left John free to paint, something his dad agreed to this when he was 23, without John worrying about whether he needed to sell any of his work. That?s just as well because it wasn?t always well-received. Constable painted what he actually saw, so his landscapes weren?t historical or mythological backdrops. They were gratuitous landscapes. And whatever incidents he painted were real.

Three years after he went professional, and having studied at the Royal Academy, Constable was offered the post of ?drawing master? at Great Marlow Military College. Yet he?d turn it down and that miffed Benjamin West who was master of the Royal Academy since he reckoned Constable had already ruined his career-prospects. Although Constable was to exhibit in the Royal Academy as soon as he?d finished his course he had to wait another 15 years or so before he flogged a major work (?White Horse?). And even then he continued to struggle to sell pieces, though financially he was not dependent on doing so. He sold around 20 works in Britain though he sold more in France very quickly. Yet he was fiercely patriotic and refused to move abroad. Then he had a squabble that wrecked his Gallic sales. And here at home he attracted antagonism that seemed to explain his only being elected to the Royal Academy when he was 52. But by that time he?d spent a decade in black, and mourning following his wife Maria?s death of TB just after she?d borne him his 7th child. Yet apparently as ?visitor? to the Royal Academy, which he became when he was 54, he was very popular with students. He had a love of science and his friends included Michael Faraday. And it would seem that Constable?s interest in science is reflected in his realism.

Constable was also respected by other contemporary artists who loved his use of bright and vibrant colour, in particular the Frenchmen Th?odore G?ricault and Eug?ne Delacroix (who was inspired to repaint the background of his 1824 piece ?Massacre de Scio? after he?d seen what Constable did).

John Constable was a genius whose legacy encapsulates serene nostalgia. Surely you?d like a little of his work on your walls? You'll need it framing first. EasyFrame is an obvious and affordable supplier, whether you want to source all you?d need to do the job yourself or have them do it for you. Any good framers will be able to show you a vast range of different solutions and advise on what might be the most suitable given the work and its proposed location.