Hockneyed is a Long Way from Hackneyed This article is about David Hockney. It's a remarkable fact that, almost 30 years ago, he was offered a knighthood but turned it down. 20 years after that a poll of 1,000 British painters and sculptors declared him to be the most influential British

Hockneyed is a Long Way from Hackneyed

This article is about David Hockney. It's a remarkable fact that, almost 30 years ago, he was offered a knighthood but turned it down. 20 years after that a poll of 1,000 British painters and sculptors declared him to be the most influential British artist of all time. And this is reflected in the value of his work since the two highest prices ever realised for the work of a living artist were for his paintings, which fetched .3m and .4m respectively. (Not bad for a chap whose first sale of a picture, a portrait of his dad in 1955 when he was 18, brought him a tenner.) As a teenager he won 2nd prize in a national competition to design a watch ad. It turned out that Gerald Scarfe, later to become a famous cartoonist and illustrator for the likes of Roald Dahl, won first prize. Oh and fellow artist Peter Blake selected Hockney to be one of the cultural icons who sat for a recreation of the cover of the Beatles 'Sergeant Pepper's Lonely Hearts Club Band' sleeve. And a couple of years back there were record ticket-sales for his exhibition at Tate Britain. What's more, this is an octogenarian who routinely paints on his iPad. All of this is utterly amazing. But not, in my book, as amazing as the fact that a guy with several homes in London and California, with his capacity to make life-choices beyond the reach of mere mortals, would actually opt to live in Bridlington.

Artists Are Supposed to See What Others Don't, Aren't They? But Beauty in Brid?

To anyone who says I shouldn't be unkind about Bridlington I'd maintain that I have every right to be. I grew up there. It's a pit. And, to be frank, there's little to separate it from nearby Filey which infamously attracted the ire of the satirical magazine 'Viz' when it ran a special on the town with a back-page pull-out for Filofax-owners featuring lots of facts about Filey. As The Telegraph opined in 2013, 'The railway arrived in Bridlington in 1846 and not much else exciting happened until Hockney came here eight years ago'. I'd agree with that, almost. Except for 'not much'. I'd substitute 'nothing at all'.

Joking apart, and in his defence, Hockney had decided to convert the loft of what was formerly his mum's home into a large studio. He was Bradford-born anyway. And he'd fallen in love with the Yorkshire Wolds, the county's East Riding, and the local light. That's why he ended up spending a decade painting vast canvases beside his little van as he'd stop anywhere by the roadside to get his canvases out and start daubing. Though, apparently, he and a team used some industrial premises in Bridlington to finish big pieces in a space which was so expansive that they needed mobility scooters to get from A to B. 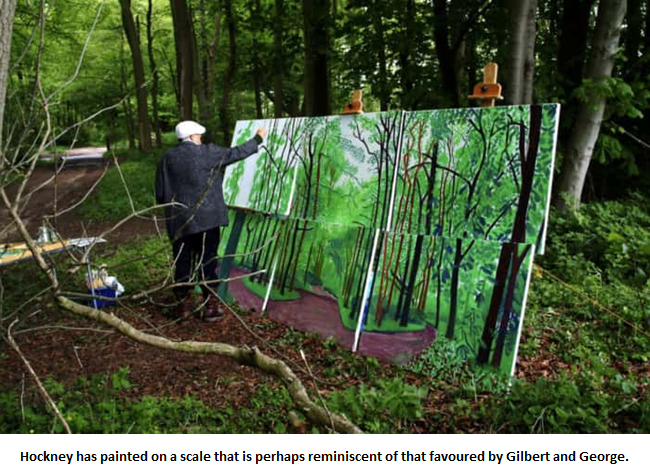 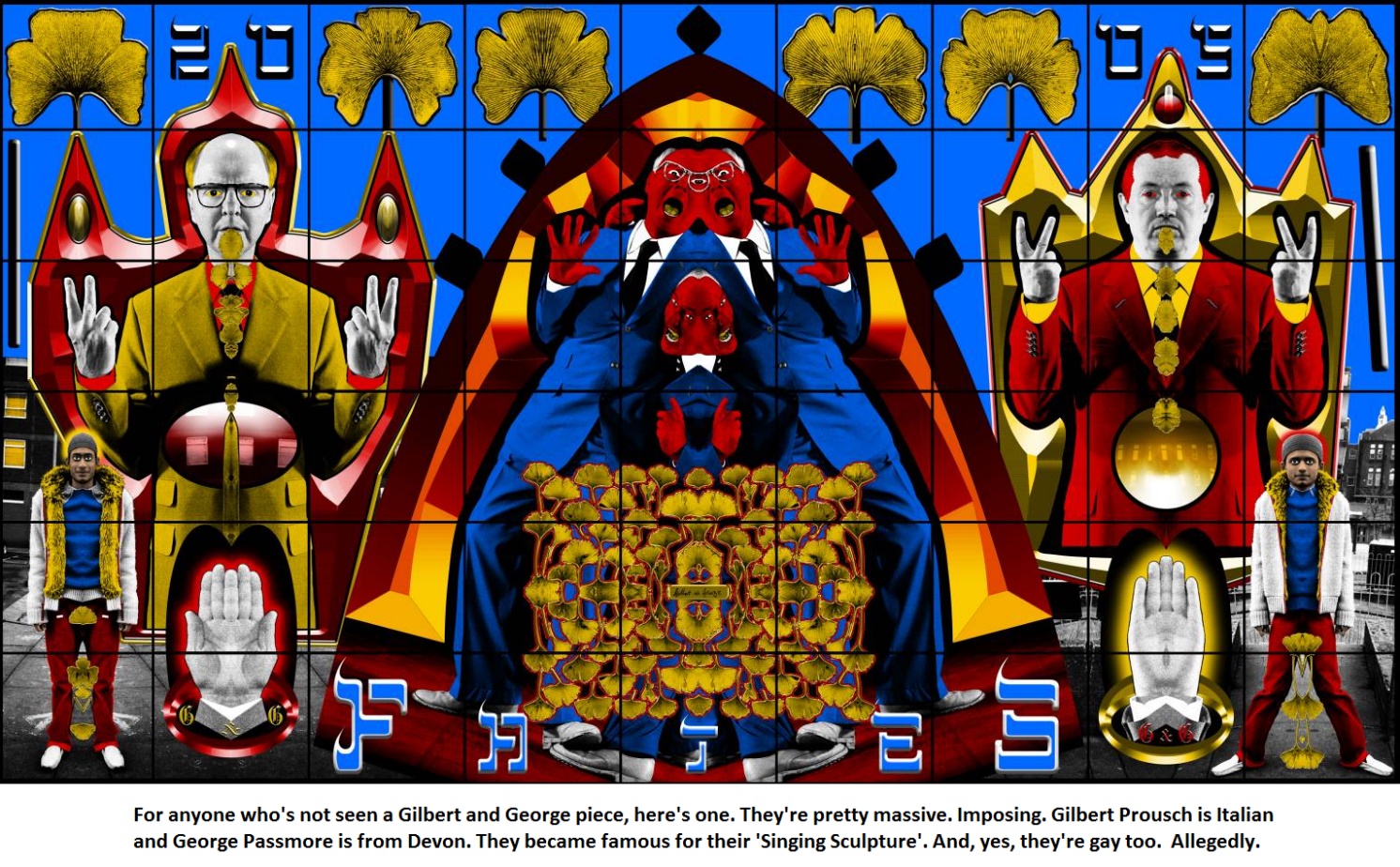 Let's Take a Step Back

Where do we start? Well so much has been written about Hockney that I feel obliged to come up with a different take on him. So here it is. 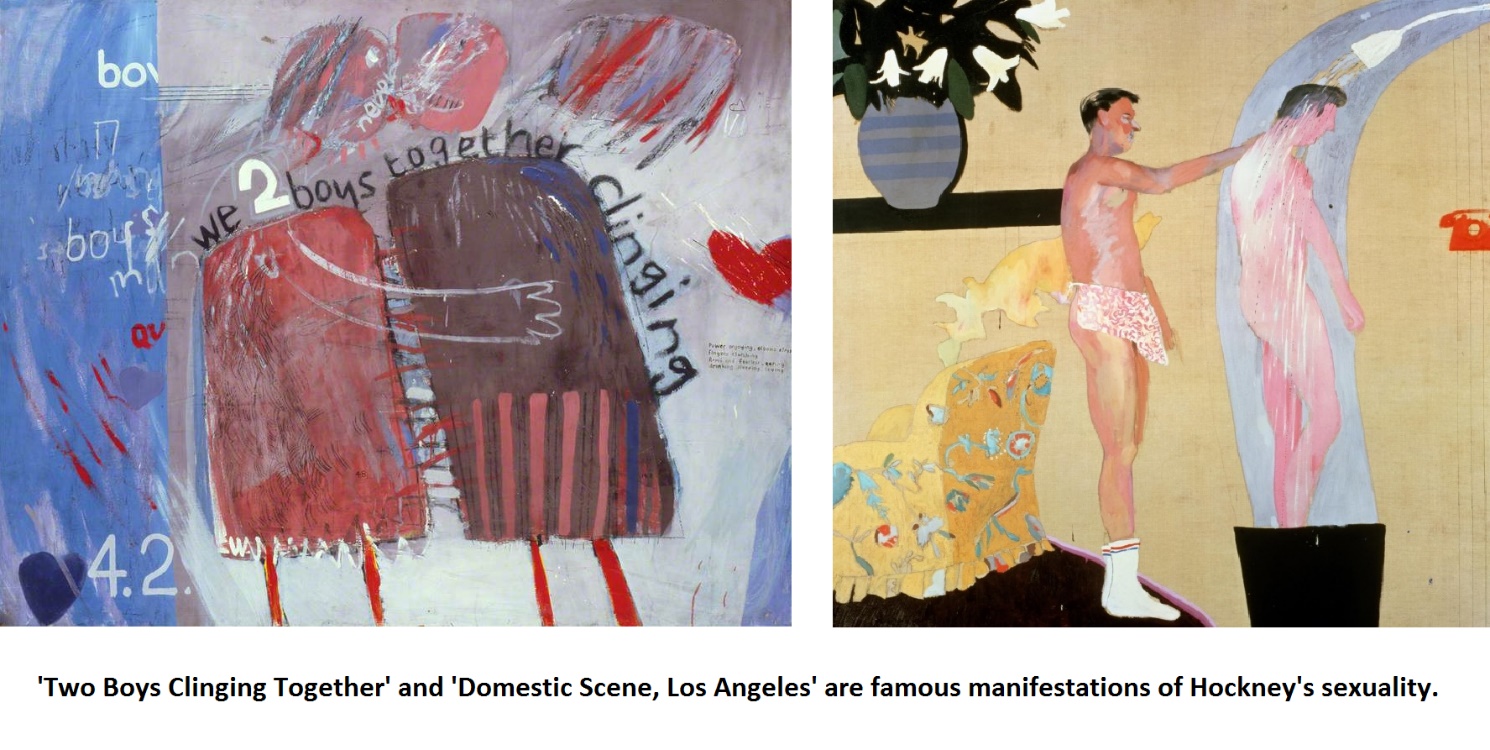 He would have been 30 in 1967 when homosexuality was decriminalised. He has always been openly gay, it seems, and on that score he went out on a huge limb at the Royal College of Art five years before the Homosexual Offences Act was passed. He refused to execute a female life-study and knocked out 'Life Painting for a Diploma' instead. He must have been cocky because he also refused to write an essay for his final exam, insisting that he should only be assessed for his art. And he got away with it. The RCA changed the rules in order to avoid the excruciating embarrassment of not giving their diploma to such a precocious young talent. 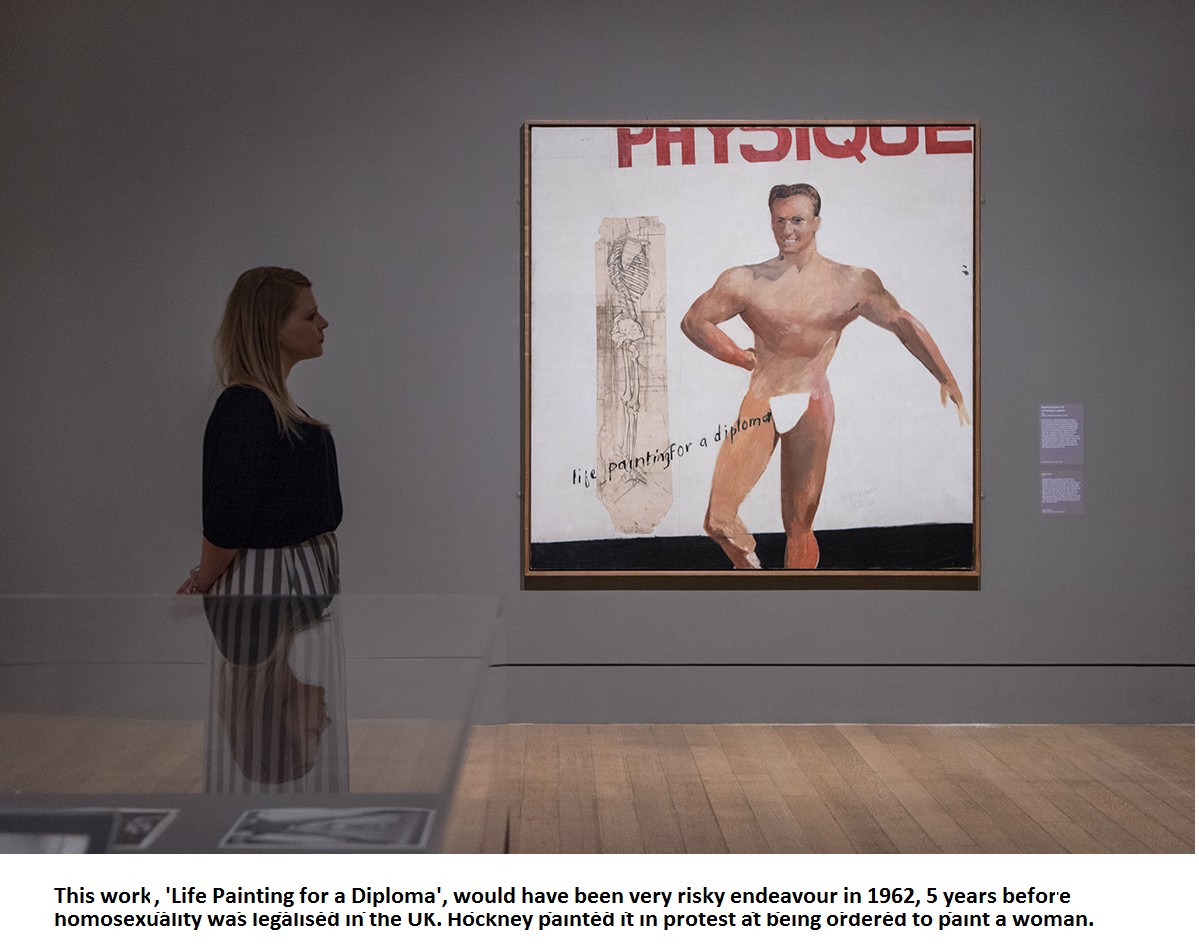 By 1972 Hockney was off in the states and apparently painting every pool California. Indeed he was to become famous for his 'Portrait of an Artist (Pool with Two Figures)'. Actually he's always kept fit by swimming. But pools appear to have been part of what was his avant-garde lifestyle. 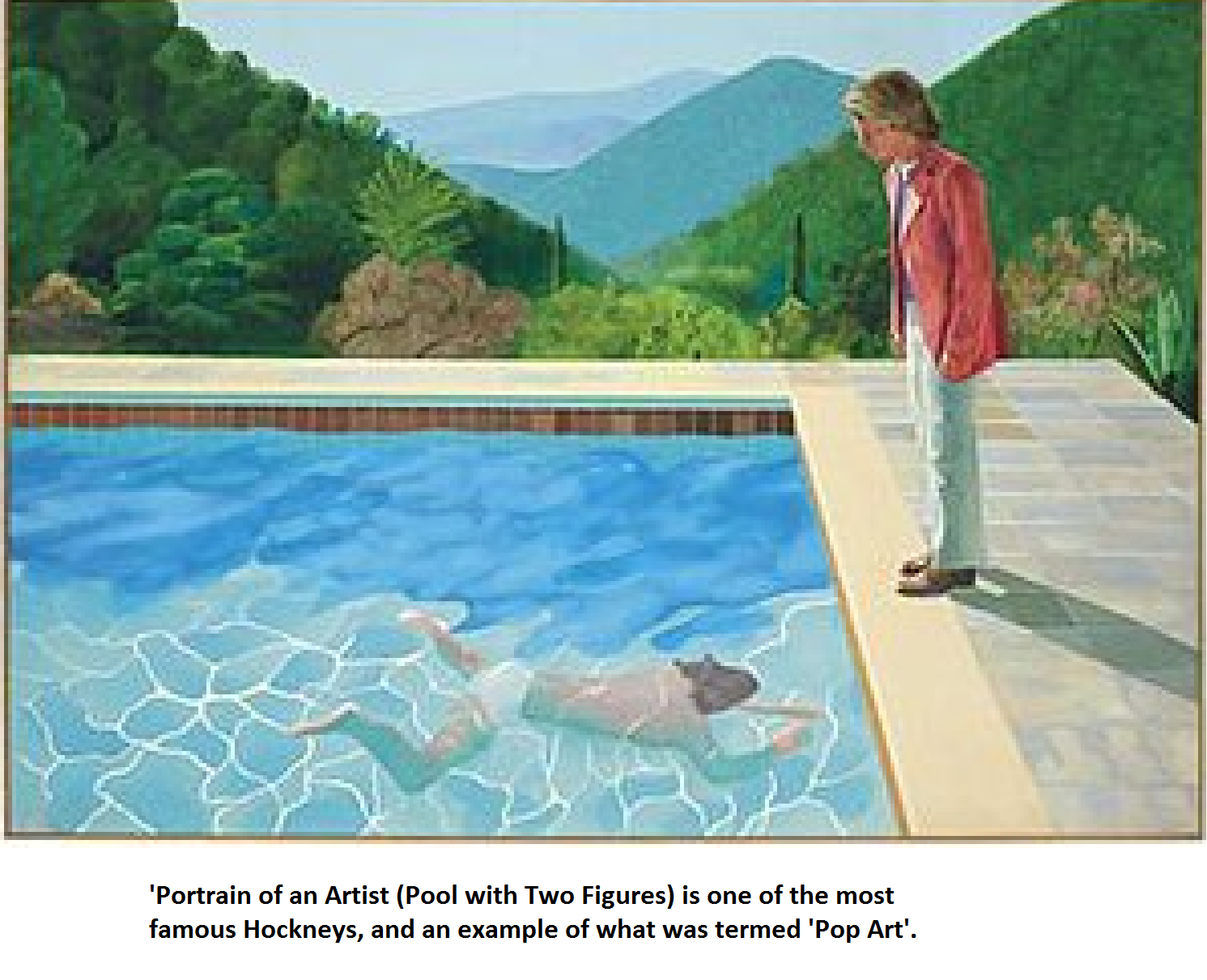 Sadly Hockney's spur to leave Bridlington appears to have been the death, after drinking drain-cleaner having taken cocaine, ecstasy and a psychoactive drug, of his 23-year-old assistant. Hockney's partner took the lad to hospital but he died en route. There never was any suggestion that Hockney was responsible, and indeed the inquest returned a verdict of misadventure, but a couple of years later Hockney sold up and left Bridlington ? no doubt consigning it to another 150-odd years of torpor.

Despite his advancing years Hockney is still working hard and frequently available for interview (though he's rather deaf). He's a bit of an anarchist still, and has some strongly-held views on unpopular causes including smoker' rights. Indeed he was castigated for re-imagining the design for the banner on the gutter-press newspaper 'The Sun', accidentally aligning himself perhaps with its right-wing policies including being pro-Brexit.

But forget the politics. They're essentially irrelevant beside the art. And it's art which continues to surprise. Because, even at 81, none of Hockney's work's hackneyed.

David Hockney's work will endure in its popularity. And even a print is likely to retain its value.

To find out how to obtain his work go to his own site at www.davidhockney.co or the Tate Gallery's at https://shop.tate.org.uk/exhibitions-and-tickets/prints-books-and-gifts/david-hockney

You'll need them framing. EasyFrame is an obvious and affordable supplier, whether you want to source all you'd need to do the job yourself or have them do it for you.