Caravaggio. A Paintbrush-Wielding Psychopath This article is about Caravaggio, whose full name was Michelangelo Merisi (perhaps Michele Angelo Merigi or Amerighi) da Caravaggio, and who lived from 1571 to 1610. Named ‘Caravaggio’ after the village near Milan from which he hailed, and a formidab

This article is about Caravaggio, whose full name was Michelangelo Merisi (perhaps Michele Angelo Merigi or Amerighi) da Caravaggio, and who lived from 1571 to 1610. Named ‘Caravaggio’ after the village near Milan from which he hailed, and a formidable talent who brought both unprecedented psychological realism and an ability to accentuate light and shadow, he has been credited by some with single-handedly launching the baroque era and others with being the spark from which modern art grew.

Caravaggio’s art appears to be irrevocably intertwined with his personal capacity for violence, and what in his age what would be termed as sexual deviance. Indeed he was arguably a psychopath who would probably have met his early demise much earlier if he hadn’t been such a prodigious talent. In the short-term he spawned many imitators, the so-called ‘Caravaggisti’. And his homoerotic work continues, to this day, to be embraced by the gay community.

Caravaggio was born in 1571 during the so-called ‘dark ages’ (which lasted from 400 AD to 1,000 AD), and for sure there was a certain prevailing gloominess that he may have found to be oddly inspirational. Most of his family, including his dad and grandfather on the same day, were killed by the bubonic plague that caught up with them - even though they’d fled to Caravaggio from Milan to avoid it - when he was six.

This was anyway a rather violent world. There were apparently-interminable struggles between Christians and Muslims, and in this context the way to Rome for Islamic invaders went straight past Caravaggio’s doorstep.

After his mum died he was taught in Milan by Simone Peterzano (a pupil of Titian) from when he was 13 for 4 years, then pitched up penniless in Rome at the age of about 20 – having fled Milan because he’d been in a series of spats and had assaulted a police officer.

Rome – and Doing What Romans Did

In Rome he churned out intendedly-formulaic ‘flowers and fruit’ pieces to order in the studio of Guiseppi Cesari who was Pope Clement VIII’s favourite artist. But even with these relatively unchallenging commissions Caravaggio painted in a realistic manner – something we know because early works such as ‘Boy Peeling a Fruit’ (his earliest known painting), ‘Boy with a Basket of Fruit’ and ‘Young Sick Bacchus’ (apparently a self-portrait) have all withstood stringent botanical analysis. Nevertheless, characteristically Caravaggio had a bad fall-out with his employer Guiseppi Cesari.

Indeed this was a period when Caravaggio was almost a perpetual visitor to the courts. Tellingly when he was being sued for libelling the rival artist Giovanni Baglione, the latter revealed in court that Caravaggio had supposedly shared a male prostitute with a friend. Certainly he seems to have had a relationship with a young male assistant called Cecco. But the truth is that Caravaggio used to frequent courtesans too, and many of these lovers (along with beggars and thieves) found their way into Caravaggio’s paintings just as the artist himself did, though he never married nor had a child. Nor did he ever paint a female nude. Just a lot of naked males. Indeed there appears to have once been a painting which featured 30 males in what was described as a ‘lewdly banded circle’. To put this in perspective homosexuality had been prevalent in Greco-Roman military circles and was assumedly persisting in Catholic-dominated Rome. 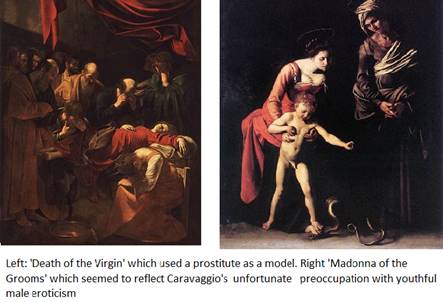 Caravaggio painted live models at quite a pace without using preliminary sketches. This certainly led to bones of contention, given that much of his work was going to be for Catholic churches. For example ‘Death of the Virgin’ was recognised by the Carmelites as featuring a well-known prostitute as the model. That led to its rejection. Meanwhile a cardinal's secretary wrote at the time of ‘The Madonna of the Grooms’ that ‘In this painting there are but vulgarity, sacrilege, impiousness and disgust... One would say it is a work made by a painter that can paint well, but of a dark spirit, and who has been for a lot of time far from God, from His adoration, and from any good thought...’

That opinion seemed to be astute. The artist’s new circle of friends included the architect Onorio Longhi, and the pair apparently shared a mutual love of street-brawling. Indeed Caravaggio was involved in endless arguments, often with a sword buckled on, which explains how in 1606 Caravaggio killed a young man called Ranuccio Tomassoni. This was possibly by accident over a gambling debt or tennis, and possibly because Tomassoni was a pimp and Caravaggio lusted after his wife, though it was always going to happen. But the upshot was that Caravaggio fled Rome, where he had become its most famous painter, for Naples where he was soon to be seen as similarly-unrivalled.

It’s worth noting that Caravaggio had hitherto always been connected with influential families who’d protected him on account of who his father had been (he’d been an administrator but also an architect and decorator), but he’d become a liability even to the 17th century equivalent of the Mafia.

Seeking Refuge in Malta then Sicily

Caravaggio moved on to Malta, where in 1608 he was responsible for battering down the door of an aristocratic knight and severely injuring him. He then escaped his imprisonment and fled to Sicily.

Caravaggio’s behaviour was deteriorating by this stage, though it was never good. He was apparently becoming so paranoid that he slept fully-clothed and armed. He’d rip up paintings if anyone criticised them. And he’d picked fights with anyone. This may have been because he was suffering from lead-poisoning (many contemporary paints contained lead though historically Mediterranean peoples sweetened wine with lead-sugar too). And in all probability Caravaggio had syphilis which can also create madness. Apparently he felt so unsafe, especially after he was ambushed and attacked leaving him facially disfigured by knights who’d tracked him from Malta, that he decided to flee back to Naples. This manoeuvre involved taking 3 paintings to give to Pope Paul V as a blatant bribe to pardon him. It worked. Or, at least, it looked like it was going to do.

Somehow in 1610 between Naples and Rome, on his way to be pardoned, Caravaggio met his perhaps-not-untimely end at 36. That may have been from the already-mentioned lead-poisoning or syphilis, from malaria, brucellosis (from unpasteurised dairy products) or sepsis from wounds received when he’d been attacked yet again in one of the vendettas that dogged him. There is some evidence amongst documents in the Vatican that Caravaggio had attempted to castrate a lover and that it had gone wrong then led to a death for which the artist was understandably blamed then pursued. There is always the chance that he had just become too much of an embarrassment to the Vatican or patrons.

In summary Caravaggio could paint light as nobody before him had done, though he was usually in a dark place. He left between 40 and 80 works, according to who you ask, but any of those are worth between Ł20m and Ł100m apiece. So, whatever one might think of him as a person, he left an impressive legacy as an artist after just a decade of peddling his wares.

Nobody is expecting you to buy an original. But fine prints are available to frame. One excellent place to purchase them is the National Gallery website at www.nationalgallery.co.uk/products/caravaggio.