Cubism for Beginners We’re all familiar with the work of Picasso – but when it comes to Cubism, the art movement to which much of his work belonged, how much does the average person really know? 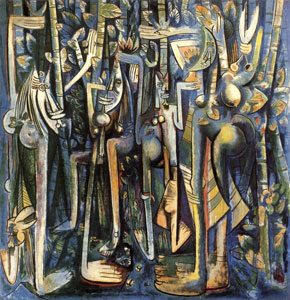 We’re all familiar with the work of Picasso – but when it comes to Cubism, the art movement to which much of his work belonged, how much does the average person really know?
Currently showing at the Tate Modern in London is an exhibition dedicated to the “Cuban Cubist” Wifredo Lam, an artist who travelled widely, collaborated with other Cubists and drew on his own heritage to create powerful, politically important paintings that challenged the status quo. In honour of this exhibition (and because we’re not just experts in picture framing), we took a look back at the history of this fascinating movement.

Officially, Cubism was a movement founded by Pablo Picasso and Georges Braque during the first years of the 20th century. However, if you look back at earlier works you can find its roots in the work of artists such as Paul Cezanne, who was active at the end of the 19th century. Though usually considered a Post-Impressionist, Cezanne is often seen as the painter who paved the way for Cubism.
Cezanne’s works famously played with perspective, distorting the size or positioning of objects. He painted using vivid, angular brushstrokes, giving something like a patchwork effect, and his works often had a flatness to them – instead of conveying depth with the use of light and shadow, Cezanne made objects appear on a single, flat plane.
It’s been said by many art historians – and even neuroscientists – that Cezanne’s style of painting represented an attempt to depict the realities of human perception. What we really see when we look at an object, person or landscape, in other words, is a jumble of light, colour and angles, which all shift and change depending upon where we are positioned. This concept was to be a key influence in Cubism.
Another key influence for the Cubists was native, traditional art that came out of African, Polynesian, Micronesian and Native American cultures. Hold up a tribal African mask next to a face in a Cubist-era Picasso painting and you’ll find much to compare in the curving lines, and flattened, simplified features.

In 1907, Picasso painted Les Demoiselles d’Avignon. A year later, Georges Braque produced Houses at l’Estaque. Today, art historians argue that these two paintings marked the beginning of Cubism – at the time, the movement wasn’t officially acknowledged until 1911, and it was Picasso alone who was initially given credit for its inception.
Though it is hard to define Cubism precisely, it can be widely explained as a movement that challenged traditional forms of representation. It came along at the same time as Modernist literature (which also experimented with style and expression) and aimed to develop a new way of seeing that better reflected modern life. With the advent of photography, many painters felt that representational art (i.e. art that tried to depict how things truly appeared) was becoming irrelevant – Cubism, with its abstract approach to perception and reality, offered a new form of artistic expression.

Violin and Glass by Juan Gris

As seen in both Picasso’s Demoiselles and Braques’ Houses at l’Estaque, Cubism was a style of painting that deliberately combined multiple viewpoints, distorting the image’s perspective and depth. In a classic Cubist painting, such as Violin and Glass by Juan Gris, an ordinary, everyday object appears sliced up, its pieces jumbled together randomly. Ironically, though this style seems at first glance a distortion of the real world, it was actually an exercise in depicting reality more closely. The Cubists, like Cezanne, believed that the depiction of objects, people and landscapes in this manner more closely mirrored the way humans view the world around them; perception, Picasso and others argued with their paintings, was a complex, messy and ever-changing thing.

Though it’s easy for the layperson to lump together all Cubist paintings under one category, there are different styles – the two most notable being “analytical” and “synthetic”. Modern art historians group paintings created up until 1912 as “analytical Cubism” and paintings done after that point as “synthetic Cubism”.
The key difference between the two is that analytical Cubism attempts to a depict an object, person or landscape by breaking down the subject into multiple viewpoints and thereby giving a comprehensive impression of its appearance in the world. Synthetic Cubism was less concerned with representation of the subject, and more with use of materials, colours and textures – the result was a flatter, brighter, more abstract effect. This era of Cubism was ushered in by Picasso and Braques in 1912 when they started creating paper collages – a technique that, in turn, led to Cubist sculpture.

Head of a Woman by Picasso

If the point of Cubism was to depict three-dimensional shapes in a two-dimensional space (i.e. the canvas), then we might be puzzled by the very concept of Cubist sculpture. After all, a sculpture, by its very definition, is a 3D object that can be viewed from multiple viewpoints.
Take a look at a work like Picasso’s Head of a Woman from 1909, though, and you will see how artists could capture the spirit of Cubism even in a 3D medium. Here, the woman’s face has been broken down into exaggerated features, which come together at angles, distorting the viewer’s sense of perspective. Though striking, however, Cubist sculpture never truly rivalled the Cubist painting scene.

The Influence of Cubism

The influence of Cubism upon new generations of artists was far-reaching. In Italy, it lead to the birth of Futurism, an abstract movement concerned with technology and industry. In the UK, the Cubists inspired Vorticism; in Russia, Constructivism; and in Germany, Expressionism – which, in combination, produced some of the most significant artworks of the 20th century.

Cubism in Your Home

While the average person can’t afford their own Picasso, it’s still possible to get some fantastic Cubist artworks on your walls. In this day and age, you can get hold of high quality prints and reproductions, and with EasyFrame, you can create custom picture frames to hang them in.
To find out more about our picture framing services, head to our Picture Frames & Mounts page. And if you need more Cubism inspiration? Make time for that exhibition at the Tate Modern.